Before getting too excited about George Bush's latest tax cut, Ohioans should confirm that they will see a cut under the plan. More than one out of four Ohio taxpayers (28 percent) will see no reduction at all in their taxes as a result of the Bush plan. In all, 1,580,900 Ohio taxpayers will get no tax decrease, according to a new state-by-state analysis conducted by Citizens for Tax Justice, and released in Ohio by Policy Matters Ohio. The CTJ analysis, released today, is a state-by-state examination of the effects the latest plan would have on year 2003 tax returns.

Nearly half of Ohio's taxpayers (47 percent) will see less than a $100 reduction in their tax bills. That's 2,634,500 tax filers in the Buckeye State with a saving of zero or less than $100. "With more than a fourth of Ohio taxpayers getting nothing from the plan, and nearly half getting less than $100, it's no wonder the plan is so unpopular," said CTJ Director Bob McIntyre. "It's not worth endangering important programs, hurting the economy and adding to the deficit for something that barely helps most Ohioans."

Middle-income Ohioans (-$287) save about the same amount as middle-income U.S. residents as a whole (-$289). But the big gainers are the top one percent of taxpayers in the northeast -- Connecticut's top one percent stand to gain $66,072 under the plan. "Tax cuts to the top might sell in Connecticut," said Amy Hanauer, Executive Director of Policy Matters. "But in Ohio, I think people prefer a fairer plan."

The state receiving the biggest median tax cut is New Hampshire, which will see a $438 reduction for middle income payers. The state with the largest percentage getting nothing is Mississippi, with 44 percent of taxpayers getting no reduction at all from the plan. A table on page two depicts the effects of the plan on Ohio and the nation as a whole.

The Bush Tax Plan: Ohio and the Nation 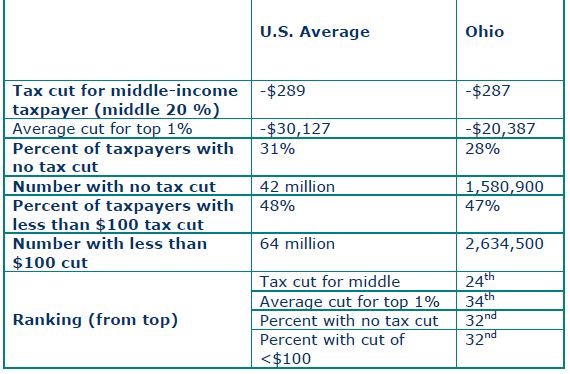 "Ohio should realize that the Bush tax plan provides little or no help to most Ohioans, while showering huge benefits on the wealthy," said McIntyre. "The 28% of Ohio taxpayers getting nothing from the plan should ask how this is going to help them stimulate the economy."

Citizens for Tax Justice is a non-partisan Washington-based research group.
Policy Matters' research on tax fairness is supported by a generous grant from the Cleveland Foundation.