Since the early days of the pandemic, when stay-at-home orders shifted the work of many Ohioans from their offices to their homes, House Bill 197[1], the Coronavirus Relief Bill, maintained municipal income tax withholding at their old worksites. The provision allowed cities to sustain services pending a return to normal; it ceases when the State of Emergency related to COVID-19 ends. A proposal in the Ohio General Assembly could make it more difficult for many communities across the state to serve residents. 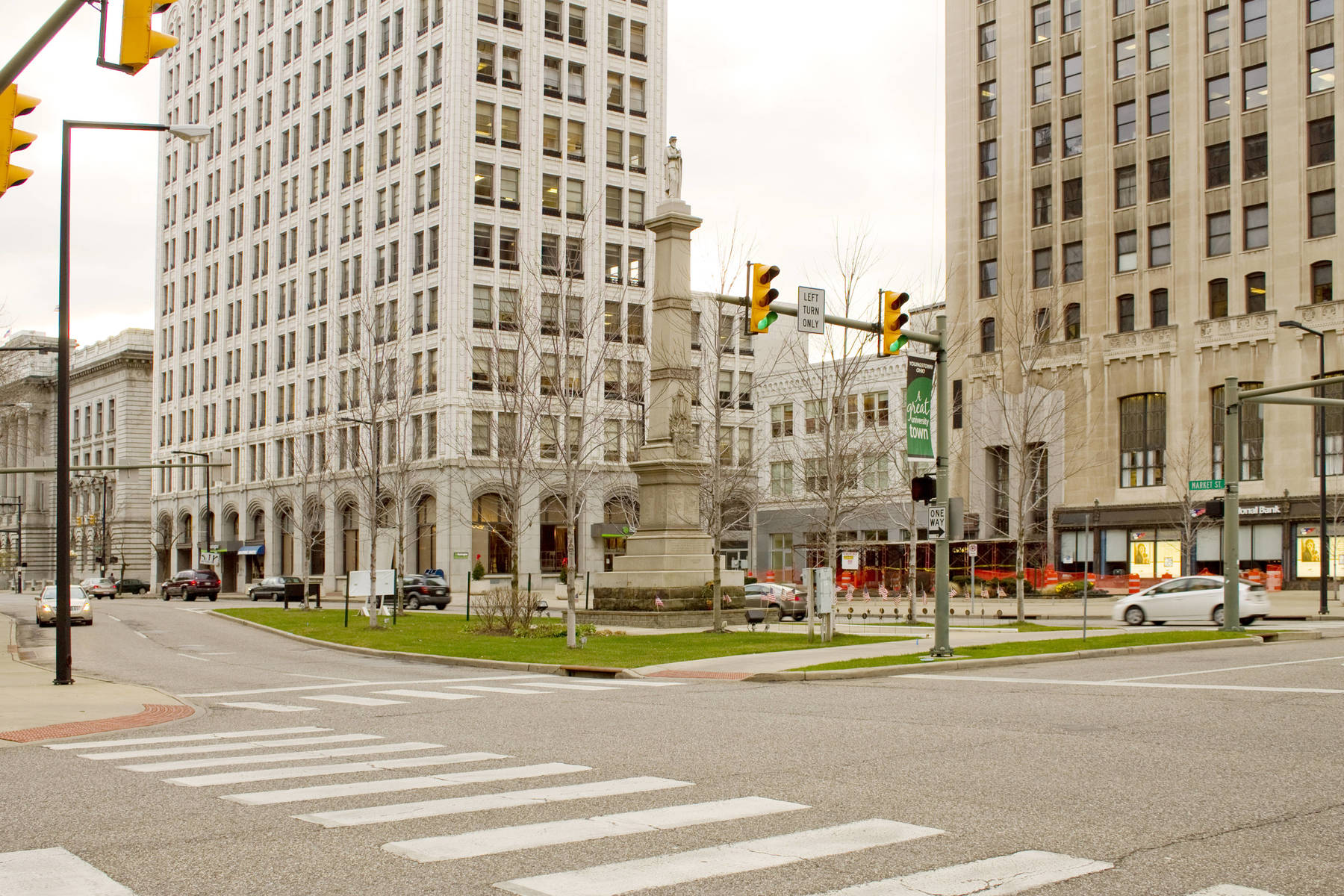 Photo of downtown Youngstown by Jack Pearce via Flickr.

Senator Kristina Roegner (R-Hudson) introduced SB 352[2] to end the provision under HB 197. Representative Kris Jordan (R-Ostrander) has introduced companion legislation, HB 754.[3] Under these bills, employers would arrange for municipal income tax withholding for each employee in the individual jurisdiction where they live if working from home. Staff of the conservative Buckeye Institute have sued[4] the city of Columbus for the same purpose.

The Regional Income Tax Authority (RITA), which collects and administers the municipal income tax on behalf of 330 jurisdictions in Ohio (51% of all Ohio municipalities that levy an income tax), estimated the impact of the proposed change for 300 client cities, looking at the impact of a net shift in income of 10%, 20% and 30%, both in terms of gains and losses. The estimates factored in the credits that many municipalities have for taxes paid elsewhere. The analysis provides estimates, but actual impact will depend in the circumstances in each place.

In the middle scenario — a 20% shift in net income — 85% of the cities analyzed would be net losers. Collectively, the estimated loss ranges from $35 million in the lowest scenario to $105 million at the highest. About a quarter of cities would lose 10% or more of their annual municipal income tax revenue; 16% would either not lose revenue or would gain it.

Not all cities lose. Based on the RITA analysis and looking at the middle scenario, about 15% of Ohio’s municipalities would gain revenue. The list of the top 10 cities that would gain the most revenues includes some of Ohio’s affluent communities. 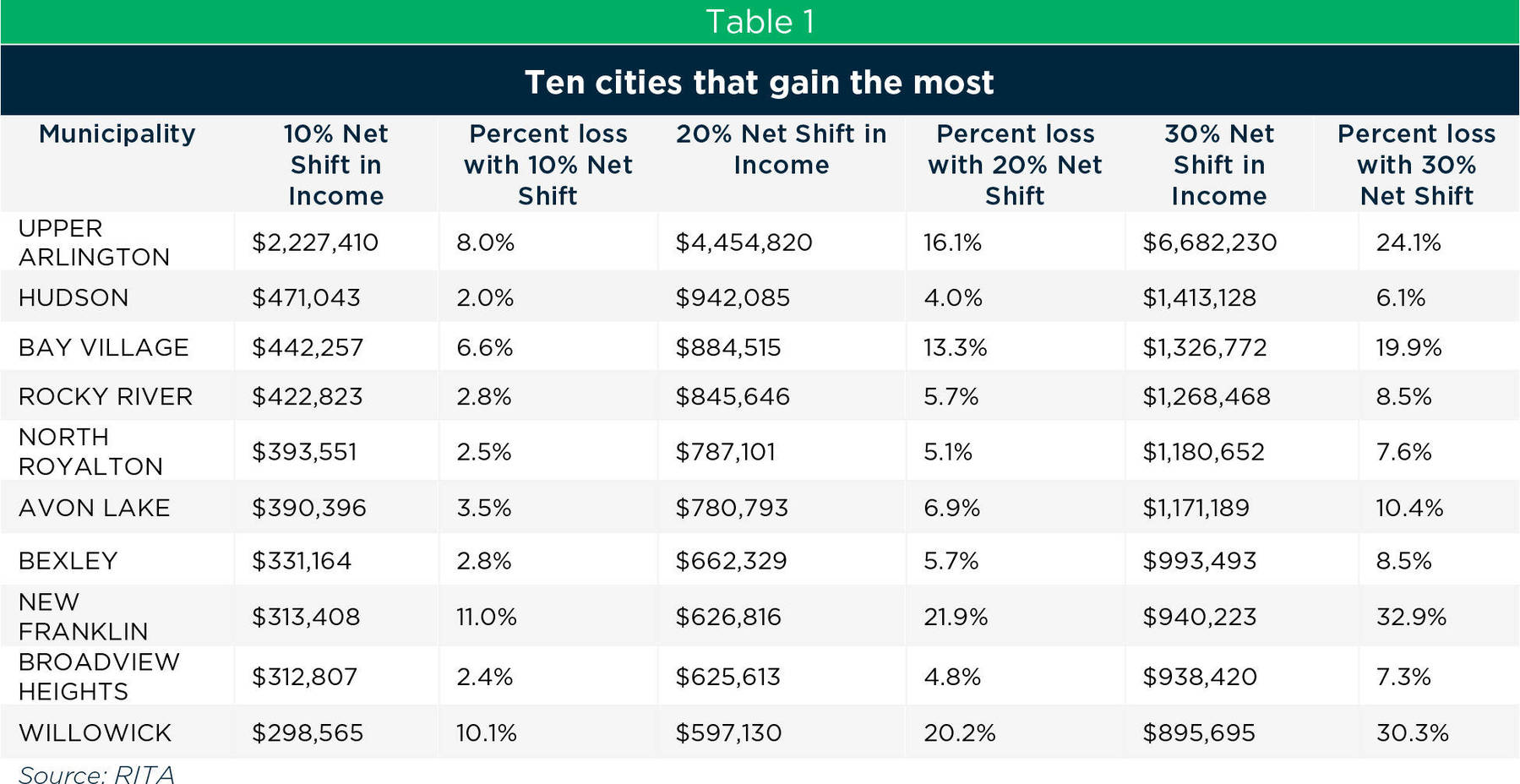 Some affluent communities would lose under SB 352. Communities like New Albany and Solon, for example, have high income residents working from home and significant employment bases. However, even a loss in the millions to these wealthier communities would constitute less than 10% of municipal income tax revenues.

Less well-off communities would be harmed the most. Estimates under the 20% net impact scenario show Jackson and Rio Grande could lose 17% and 16% of total revenues, respectively; Cardington, 13%; Oakwood, 13%; Lodi, 12%; and Ravenna and Ostrander, 11%.

Communities that could lose more than $500,000 under the same middle scenario include Circleville, Steubenville, Fostoria, Sandusky, Grove City, Worthington, Medina, East Cleveland and Bedford Heights. Youngstown could lose up to 14.2% of its revenues, or $9.6 million a year under the middle scenario — the hardest hit of any community analyzed by RITA.[6]

The loss would come as communities struggle in the pandemic recession.[7] The Brookings Institution found Ohio’s big cities were among the most at-risk from the pandemic because of their dependence on municipal income taxes.[8] In addition, state cuts and elimination of revenue sources have taken more than a billion from local governments over the past decade.[9]

There could hardly be a worse time to cut Ohio’s communities. Ohio’s local governments provide an outsized share of the funding and delivery of essential services. Cutting revenues for public services as the pandemic surges works against the common good. Ohio lawmakers should not pass SB 352 / HB 754.