Ohio’s income tax plays a crucial role in helping the state meet vital needs, and is the only major state tax based on ability to pay. This brief, a resource for the public and policymakers alike, explains why Ohio needs a strong income tax.

Fairness. Ohio’s income tax is the only major tax that is based on ability to pay. This principle was embraced by the founders of our democracy, such as Thomas Jefferson, as well as by the intellectual father of capitalism, Adam Smith. As your taxable income goes up, you pay a higher rate; for instance, income between $20,450 and $40,850 is taxed at 3.521 percent, while income between $40,850 and $81,650 is taxed at 4.109 percent. Those with income below $10,000 receive a credit that wipes out their tax liability; the top rate, 5.925 percent, is applied to income over $204,200.[2] Other major taxes, such as sales and property taxes, take a bigger bite out of poor and middle-class Ohioans’ income than they do of those now making $340,000 or more a year, the top 1 percent of Ohio taxpayers. Ohio, along with 41 other states and the District of Columbia, relies on a state income tax to meet vital needs. This brief describes reasons why Ohio needs a strong income tax.[1]

Even with our income tax, lower-income Ohioans pay a larger share of their income in state and local taxes than affluent taxpayers do. Figure 1 shows how the fifth of Ohioans with the lowest incomes pay the highest share of their income in such taxes on average, while those in the top 1 percent, averaging nearly $1 million a year in income, pay a considerably lower share.

State services. The income tax is the largest single source of state revenue – in the current two-year state budget, it is forecast to account for 30 percent of revenue or close to $17 billion for Ohio’s main operating budget, the General Revenue Fund. That’s more than all state spending on K-12 education – and the state pays nearly half of K-12 costs. It’s more than double the amount spent on higher education and prisons, taken together. As hard as it may be for many to afford college now, without the income tax, higher tuition and lower financial aid likely would keep many more from attending, hurting them and the state’s economic future. Whether it be support for seniors to live in their homes, child-care subsidies that allow parents to work, or education for both children and adults, the income tax is a crucial underpinning of life in Ohio. If you leave out federal sources of revenue, the contribution of the income tax to the state budget is even greater, at 42 percent. 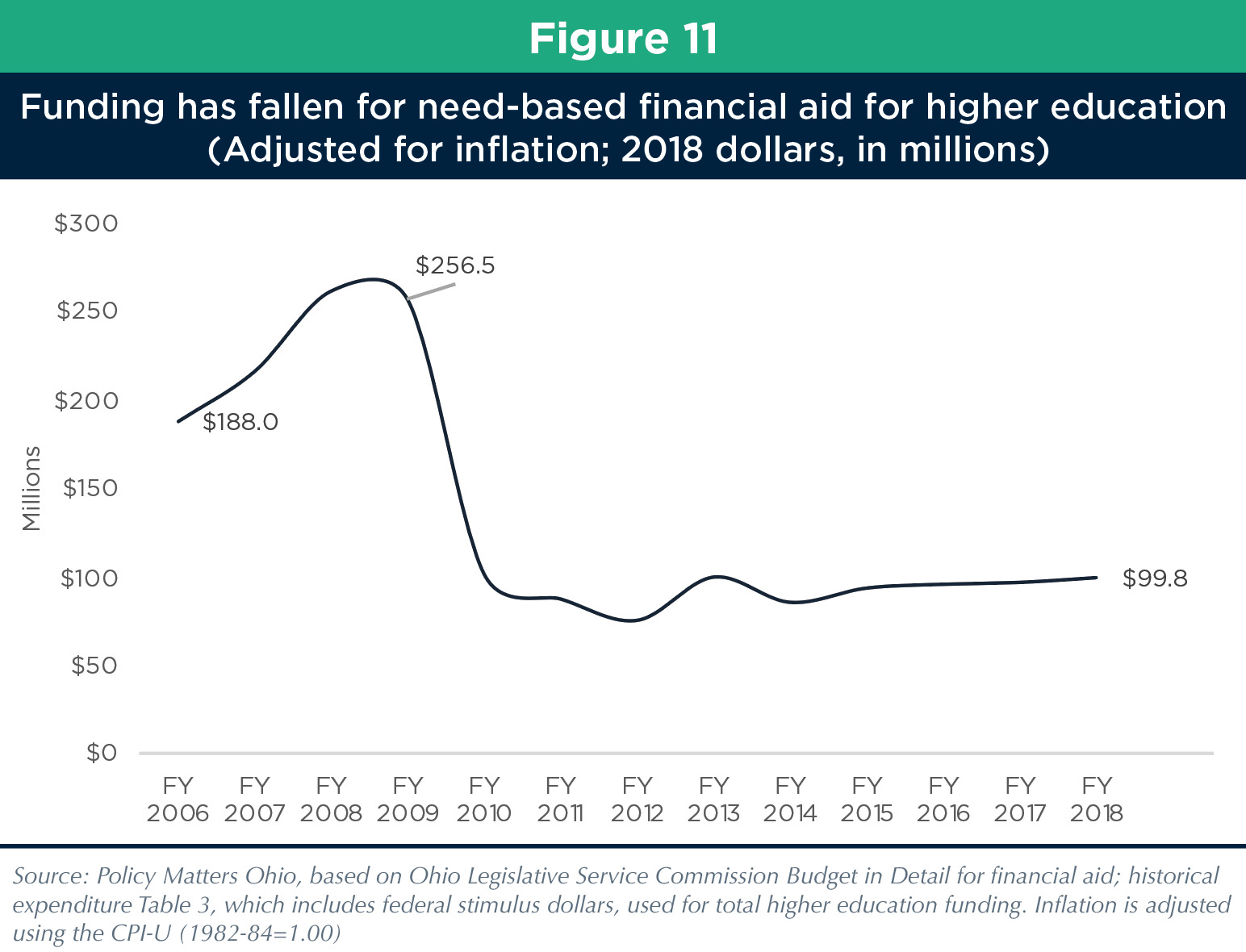 Lower property taxes. Homeowners receive a 10 percent credit each year on their property taxes, paid by the state. Owner-occupants receive an additional 2.5 percent credit, while seniors are eligible for a homestead exemption. The state makes up the difference, paying school districts and municipalities for the revenue they don’t receive. Owners in Vinton County benefited by just over $1 million in 2010; in Cuyahoga County, it was more than $240 million.[4] Statewide, this totaled more than $1.6 billion in calendar year 2010.[5] These payments are made from the General Revenue Fund, to which the state income tax is a critical contributor.[6]

Police and fire protection, trash collection, street lighting and other local services. Communities across Ohio depend on the Local Government Fund (LGF), a distribution of funds from the state to local governments, which originally grew out of the reduction of local taxes in the 1930s when the sales tax was created. Until the current two-year budget, as well as in future budgets, the Local Government Fund was and is scheduled to be a set percentage of major general revenue taxes the state receives (including the income tax). In the current budget, LGF funding was slashed, but it is still dependent on the receipt of the income tax and other state taxes.[7] Local services across the state were affected when the current state budget cut the LGF, but it remains a key contributor to the quality of life – and safety – in communities across Ohio.

Public libraries. Ohio has had among the finest libraries in the United States, and one big reason is that it has funded them at the state level. Traditionally, public libraries received a percentage of income tax collections. Though funding has been slashed 27 percent since a decade ago and libraries no longer get a straight percentage of income-tax revenue, they depend on the income tax in that it is the largest state revenue source. Even after major reductions in state budgets since 2001, public libraries received $365 million in state support during the 2011 calendar year.[8]

No Ohio county is left out. Section 12.09 of the Ohio Constitution says that: “Not less than fifty per cent of the income, estate, and inheritance taxes that may be collected by the state shall be returned to the county, school district, city, village, or township in which said income, estate, or inheritance tax originates, or to any of the same, as may be provided by law.”

Financial stability. Ohio’s constitution limits debt service to 5 percent of those obligations paid by the General Revenue Fund and net lottery proceeds. Without the income tax, the state of Ohio would breach the 5 percent debt limit next fiscal year, according to a Policy Matters Ohio analysis of the most recent estimates on debt obligations and revenues from the Office of Management & Budget.[9] Under the Ohio constitution, the state would be unable to issue new debt supported by the GRF unless the General Assembly authorized it with a three-fifths vote in each house. Such a vote would be required for each state debt issue, or many times each year. The General Assembly could increase other taxes, stretch out debt repayment or slash new capital spending to delay or avoid hitting the limit. However, the income tax is a significant factor in Ohio’s ability to repay its debts and to invest in future capital projects. This year’s proposal to spend $350 million on college buildings and renovation, as well as all of the other projects the capital budget supports, would be jeopardized without the income tax to support them. Ohio’s large backlog of unmet public construction needs, from parks to transportation projects, would grow that much more.

The role of the tax may not be so clear, until it is taken away. When the state of Oklahoma sought an improvement in its credit ratings this year, the rating agency Moody’s wouldn’t do so, in part citing plans to eliminate its income tax (In keeping its rating the same, Moody’s also cited volatility in the energy industry and the state constitution’s limit on the legislature’s ability to raise taxes).[10]

Balance for the state’s revenue system. Typically, the income tax grows with the economy, providing the state with the ability to support services that are needed by individuals, businesses and communities. Investments in education, health and infrastructure made possible by the income tax are critical to the state’s economic success. In recent years, rate cuts and a poor economy have significantly reduced revenue from the Ohio income tax. Even so, it is the largest source of revenue for the state operating budget, and balances other sources of revenue. It also provides revenue in good times that can be saved for use in bad times, as the state provides for in its rainy day fund (officially known as the Budget Stabilization Fund). Under Ohio law, after that fund reaches 5 percent of the operating budget, taxpayers receive a reduction in income-tax rates – as they did in the late 1990s.

But doesn’t the income tax drive rich people out of Ohio? In a word, no. Upper-income taxpayers are more likely to live in states with income taxes than average taxpayers are.[12] Recent research has shown that state income taxes are not a primary driving force in interstate migration decisions.[14] And states without income taxes don’t perform any better on a number of key measures of economic performance, such as median household income growth, than those with the highest top income-tax rates; in fact, they often do worse.[14] Ohio’s income tax should be protected to make our tax system fair, provide the services we need, and make investments in our future.

[1] A Policy Matters Ohio release earlier this year explained why Ohio should raise income-tax rates on the most affluent, those with incomes over $250,000 a year, in order to restore critical services and invest in the future. See “Bolster the Income Tax to Meet Ohio’s Needs,” Feb. 6, 2012

[2] These brackets were set at round numbers prior to 2010; the top bracket, for instance, covered income over $200,000. However, since then Ohio has started indexing the bracket amounts for inflation, so that taxpayers do not see their income taxed at a higher rate for that reason.

[3] Including the ability taxpayers have to write off their state income tax on their federal income-tax returns, the difference between high-income taxpayers and others is even greater. According to ITEP’s 2009 report, the top 1 percent on average pays 6.4 percent of their income in state and local taxes, compared to 9.8 percent for the middle fifth of taxpayers and 12.0 percent for the lowest fifth., Who Pays? A Distributional Analysis of the Tax Systems in All 50 States, November 2009, available at http://www.itepnet.org/state_reports/whopays.php. See also page 4 of this report.

[6] During the first seven months of fiscal year 2012, the income tax brought nearly $4.9 billion into the General Revenue Fund, slightly exceeding the sales and use tax as the largest single source of revenue. Ohio Office of Budget & Management, Monthly Financial Report, Feb. 10, 2012, available at http://obm.ohio.gov/

[7] See Patton, Wendy, “A Thousand Blows: State Budget Slashes Funding for a Broad Swath of Local Government Services,” Policy Matters Ohio, Aug. 31, 2011, available at http://www.policymattersohio.org/?p=4612. Once a month, an income tax revenue transfer is made from the GRF to the LGF. Thus, from a technical state accounting perspective, all LGF revenue deposits are against the state income tax.

[8] Like the Local Government Fund, the Public Library Fund, the state fund that supports public libraries, has recently received a percentage of GRF tax collections, and is set to do so again. However, the current budget reduced the Public Library Fund by about 6.5 percent from Fiscal Year 2011 levels for all but one month of the two years it is in effect. From a state accounting perspective, half of the PLF comes from the kilowatt hour tax, and half from the sales and use tax. The PLF accounted for half of public library operating revenue in 2010, according to data from the State Library of Ohio. See http://www.library.ohio.gov/LPD/LibraryStats

[9] Analysis based on most recent 5 percent certification by the Ohio Office of Budget & Management, Jan. 24, 2012, available at http://obm.ohio.gov/sectionpages/bondsdebt/DebtServiceLimitation.aspx

[12] In 2008, 19.0 percent of taxpayers with income of more than $200,000 lived in states without a personal income tax, compared to 20.0 percent of all taxpayers. Internal Revenue Service Statistics of Income, calculations by the Institute on Taxation and Economic Policy.

Ohio’s income tax plays a crucial role in helping the state meet vital needs, and is the only major state tax based on ability to pay. This brief, a resource for the public and policymakers alike, explains why Ohio needs a strong income tax.