Not only does Ohio’s state and local tax system fail to produce enough revenue to properly fund schools, child care, transit and more, it’s upside down. In 2018, low-income Ohioans pay almost twice the share of their income in such taxes as the state’s most affluent do. Ohio ranks 13th worst in the nation in terms of state and local tax unfairness, according to a study released today.

The national report, the sixth edition of Who Pays? A Distributional Analysis of the Tax Systems in All 50 States, was produced by the Institute on Taxation and Economic Policy (ITEP), a national research group with a sophisticated model of the the tax system. ITEP calculated an inequality index based on how the state and local tax system affects low- and middle-income families compared to the wealthiest 1 percent (for details on how ITEP calculated these rankings, see the Methodology section of the report). 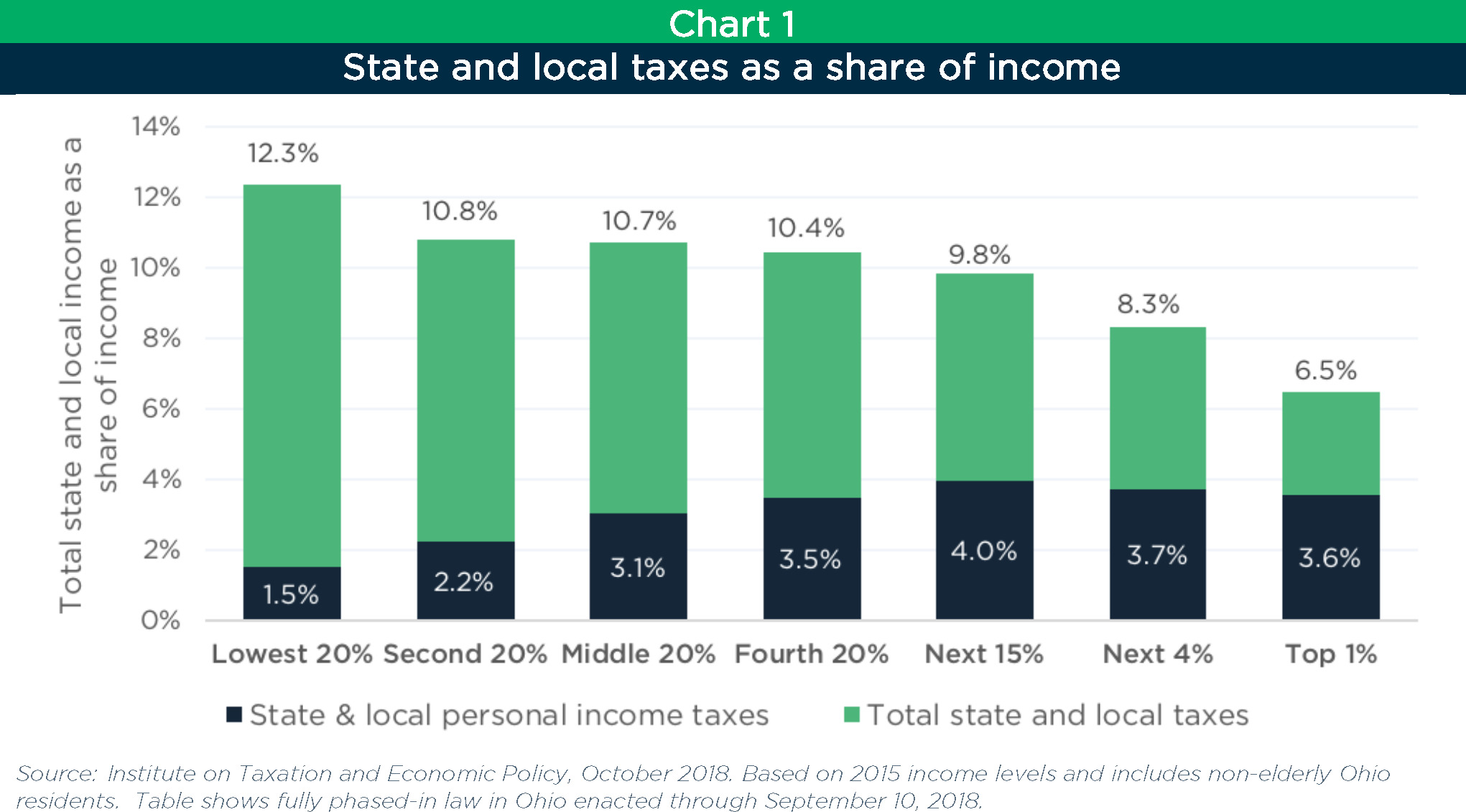 The report measures the state and local taxes paid by different income groups at 2015 income levels. It includes the impact of tax changes enacted through September 10, 2018 as shares of income for every state and the District of Columbia. Ohio’s state and local tax system is regessive because the lower one’s income, the higher one’s effective tax rate. This is in part because of Ohio’s increasing reliance on sales and excise taxes, which fall more heavily on poor families than rich ones. Table 1 below shows this disparity, and breaks out the effects of major types of taxes on different income groups.

Who Pays? shows that of the 10 most regressive states, seven do not have a broad-based personal income tax and the other three have a flat or nearly flat income tax. Of the 10 states with the least regressive tax systems, all have progressive, graduated income tax brackets and refundable earned income tax credits (EITCs) that help offset the impact of sales and excise taxes on low-income families. Ohio has a state EITC, but it is capped, not refundable and has a lower rate than most state EITCs, sharply limiting its value to the poorest working Ohioans.

The progressive income tax makes a tax system more fair, but it has long been targeted here for cuts or elimination. Ohio substantially cut its income tax in most years since 2005 and created an enormous special tax break for business income in 2013. This has contributed to unfairness in Ohio’s state and local tax system, which now weighs almost twice as heavily on people of low-income as the wealthy.

There is a growing movement against this agenda as the public recognizes continual tax cus for the wealthy and corporations make a tax system unfair and reduce money for basic public services. As income inequality grows, tax revenues will not keep up with needs if families with the greatest income growth get more and more tax cuts. Ohio’s gubernatorial debates have focused on many unmet needs, like halting the drug epidemic, providing more and better early education and childcare, protecting drinking water and restoring aid to local communities. Meeting these needs should be done with a more fair, balanced and sufficient tax structure. Policy Matters Ohio has proposed changes in the income tax to move toward that goal.

“Rising income inequality is unconscionable, and it is certainly a problem that local, state and federal lawmakers should address,” said Meg Wiehe, deputy director of ITEP and an author of the study. “Regressive state tax systems didn’t cause the growing income divide, but they certainly exacerbate the problem. State lawmakers have control over how their tax systems are structured. They can and should enact more equitable tax policies that raise adequate revenue in a fair, sustainable way.”