By adding a 10% refundable option to the existing 30% nonrefundable credit, legislators could extend Ohio’s EITC to, or increase the value of the credit for:

The federal Earned Income Tax Credit (EITC) helps working families make ends meet and reduces poverty—especially among children.[1] It is available only to people who work. Last year, almost 900,000 Ohioans claimed the federal credit, qualifying for $2.2 billion, an average credit of about $2,500 for each family.[2]

The federal EITC is refundable, so working people receive the full value of their credit, even if it exceeds their federal income tax liability. Its value is based on earned income and family size. Because lower-income families pay a higher share of their income in sales tax, payroll tax, property tax and other state and local taxes, this makes sense. The credit was set up to make it easier for families to work, even when good jobs are hard to find.

The federal credit is so effective that 29 states, including Ohio, have used it as a model for their own EITCs, calculating the state credit’s value as a percentage of the federal one. However, Ohio’s credit leaves out the most important part: refundability. That flaw keeps our EITC from living up to its poverty-fighting potential.

In this year’s transportation budget, legislators improved Ohio’s EITC in two important ways. They raised our very modest 10% credit to 30% of the value of the federal credit, and they eliminated an income cap that no other state had. But they did nothing about the biggest problem – the lack of refundability.

Legislators should strengthen our state EITC by adding a 10% refundable option to the new 30% nonrefundable credit, allowing filers to receive whichever is greater.

Like the federal credit, most state EITCs are refundable. Refundable EITCs give families the full value of their credit, even if it is more than they owe in income tax. For example, if a family owes $500 in income tax and qualifies for a $1,000 EITC, the credit covers the $500, and the remaining $500 is refunded to the family.

With Ohio’s nonrefundable EITC, that family would not get a refund, no matter how great the value of their credit. 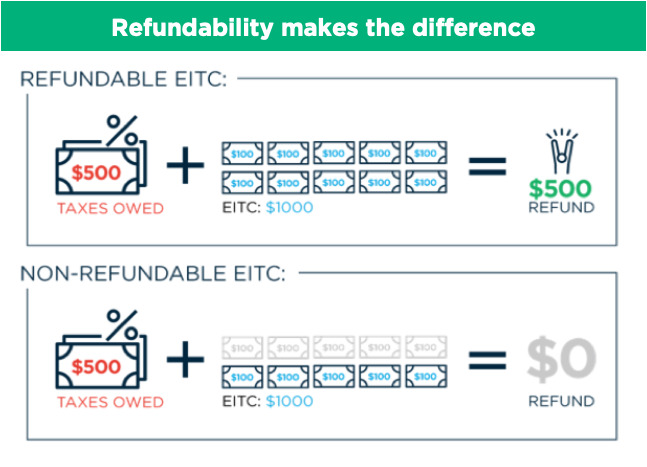 That’s why the recent increase in the value of Ohio’s credit—from 10% of the federal to 30%—will expand the EITC to just 1% more of the lowest-earning quintile of Ohioans, raising the average value of their credit by just $6, according to the Institute on Taxation and Economic Policy (ITEP).

Consider, for example, a working mother who has two children and works full time, year-round, cleaning offices. This is the 9th most common occupation in the state. More than 81,900 Ohioans are janitors or cleaners. This mother, earning a typical (median) wage for the job, would get $12.03 an hour, a little more than $25,000 a year. It would put her family at 120% of the federal poverty level.

Increasing the EITC to 30% of the federal credit without making it refundable will do nothing to boost the income of this family. The mother’s income tax liability is already reduced to zero by other income tax exemptions and credits. But this family has paid a significant amount of other types of tax. For example, the IRS sales tax estimator suggests the mother is paying about $673 in sales tax each year.

By increasing the income of working people in low-wage jobs, a refundable credit serves as a buffer against poverty, or a pathway out of it. The refundable federal EITC alone helped more than 265,000 Ohioans work their way out of poverty in 2016, according to ITEP estimates.[4]

By reducing poverty, the EITC has long-lasting benefits that reach beyond the people who claim it. One study found that $1,000 of EITC income reduced rates of low birth weight—a leading cause of infant mortality[5]—by 7% overall and by 8.2% among African Americans.[6] Children in households that receive refundable federal credits tend to be healthier than those in similar households that do not. Those children tend to perform better in school. They have higher rates of college enrollment, leading to better jobs with higher wages, providing more financial security later in life.[7] These benefits result from the additional income families receive from refundable credits.

Ohio’s EITC – whether refundable or not – is smaller than the credits analyzed in these studies. But making it refundable will mean it does more to boost income for the lowest-income working people and can help create long-term benefits for the working families who struggle most.

Refundability is good for the economy.

EITC refunds are distributed in lump sums, giving low-income working families an opportunity to make purchases or repairs they otherwise couldn’t afford.[8] The credits infuse much-needed cash that rapidly circulates through the economy as people spend money on things they need. Recent research by the Federal Reserve suggests that low-income working people may spend as much as half their refund in the first two weeks, much of it on food.[9]

Refunds help absorb some of the expenses of employment, such as transportation and child care. That is especially important for working people with less formal education, whose jobs often pay too little to leave much for expenses after covering all the costs of going to work. Low-wage positions are disturbingly common. Six of Ohio’s 10 most commonly-held jobs in 2018 paid so little that a family of three needed – and qualified for – food aid. In 2000, that figure was just four in 10. In that time, wages in some of those jobs have actually fallen, when accounting for inflation.[10] Along with substantial investments in public transit and child care, a refundable credit is a way to make low-wage work pay.

Refundability gets cash to people who need it most.

The EITC is no replacement for decent wages, but for many working people, a robust federal credit combined with a strong refundable state credit can make the difference between low-wage work and poverty-wage work. Adding a 10% refundable option to the existing 30% nonrefundable credit would create a small, targeted tax cut focused where it will do the most good. Our proposal would drive 56% of the resulting tax cut to working people in the lowest income quintile—the people who need it most. While low-income Ohioans pay a greater share of their income in state and local taxes than more affluent residents, they don’t pay that much income tax, which is based on the ability to pay. So income-tax cuts don’t do much for them. Most of the House’s proposed cuts go to Ohioans making more than $100,000.

Ohio’s nonrefundable EITC reduces income tax. It does nothing to address the inequity built into other parts of our tax system. Other taxes, such as the federal payroll and state sales tax, disproportionately affect low-income families. On average, those families spend 12.3% of their income on state and local taxes, compared to just 6.5% paid by Ohio’s wealthiest 1%.[11] Refundable credits enhance the earnings of those at the lower end of the income scale, making up for some of that disparity.

Compared to broad tax cuts, a refundable EITC offers more poverty-fighting bang for our buck. It should be part of a tax reform package aimed at balancing our tax code, making sure everyone pays their fair share. Policy Matters Ohio has proposed other changes that would begin this process; a refundable EITC is just one of them.

A measure included in the House budget bill would generate more than enough revenue to fund our proposal. The House bill would shrink the business income deduction often known as the LLC Loophole—a costly tax break that hasn’t been shown to help the economy. That move alone would generate $528 million,[12] far more than the estimated $170 million a year ITEP estimates it would cost to build a 10% refundable option into Ohio’s existing 30% nonrefundable EITC.

For help with data analysis, we thank Aidan Davis of the Institute on Taxation and Economic Policy. For financial support that made this research possible, we are grateful to the Economic Security Project.

Dollars That Make Sense: The EITC In Ohio
September 21, 2006

Dollars That Make Sense: The EITC In Ohio
September 21, 2006