Senate tax cuts would go mostly to the affluent

Senate tax cuts would go mostly to the affluent

Budget proposal leaves out anyone making $22,150 or less

Ohio lawmakers can use the 2022-23 state budget to rebuild communities after COVID-19 so all people, no matter what they look like or where they live, can live happy and healthy lives. Instead, the Ohio Senate proposed a budget that doubles down on years of failed trickle-down policies that funneled resources to the wealthiest Ohioans and corporations at the expense of funds for schools, public health and working people. The Senate proposal to cut income-tax rates by 5% would favor the richest Ohioans without doing anything to help Ohioans making less than $22,000 a year. In that, it is similar to the 2% reduction approved by the House – except it would grant greater cuts to the most affluent while still doing little for most Ohioans.

Those are the key conclusions of an examination of the proposed tax cut prepared for Policy Matters Ohio by the Institute on Taxation and Economic Policy (ITEP), a Washington, D.C., nonprofit with a sophisticated model of state and local tax systems. Costing $874 million over two years, the funds could be better used to care for Ohio’s people. That could include accelerating funding of the Fair School Funding Plan approved by the House in its version of the state budget or bolstering access and support for child care in the state, among other things. It could also support a refundable state Earned Income Tax Credit (EITC), which would help get a little more money into the pockets of low-paid working Ohioans.

Because their incomes are so low, taxpayers with income of less than $22,150 don’t pay Ohio income tax under existing Ohio law and the Senate bill. Though these taxpayers on average pay a larger share of their income in overall state and local taxes than the most affluent do,[1] none of them would benefit from the 5% cut. The three-fifths of taxpayers who are paid less than $64,000 a year would get just 7% of the total tax cut. Those in the middle fifth of the income spectrum, making between $41,000 and $64,000 a year, on average would pay $22 less a year. Nearly half of the tax reduction would go to those in the top 5%, who are paid more than $221,000 a year. The top 1%, who have income of at least $526,000, on average would get an extra $1,712 and receive a quarter of the tax reductions. That compares with the $612 reduction that the top 1% would average under the House plan, according to an earlier ITEP analysis.[2]

The table below shows how tax filers in different income groups would fare under the Senate bill when fully phased in. The bulk of taxpayers receive cuts so small they would barely be noticeable. This is how the income tax works: As income grows, it is taxed at a higher rate. That’s why upper-income taxpayers are the big winners from income-tax rate cuts. 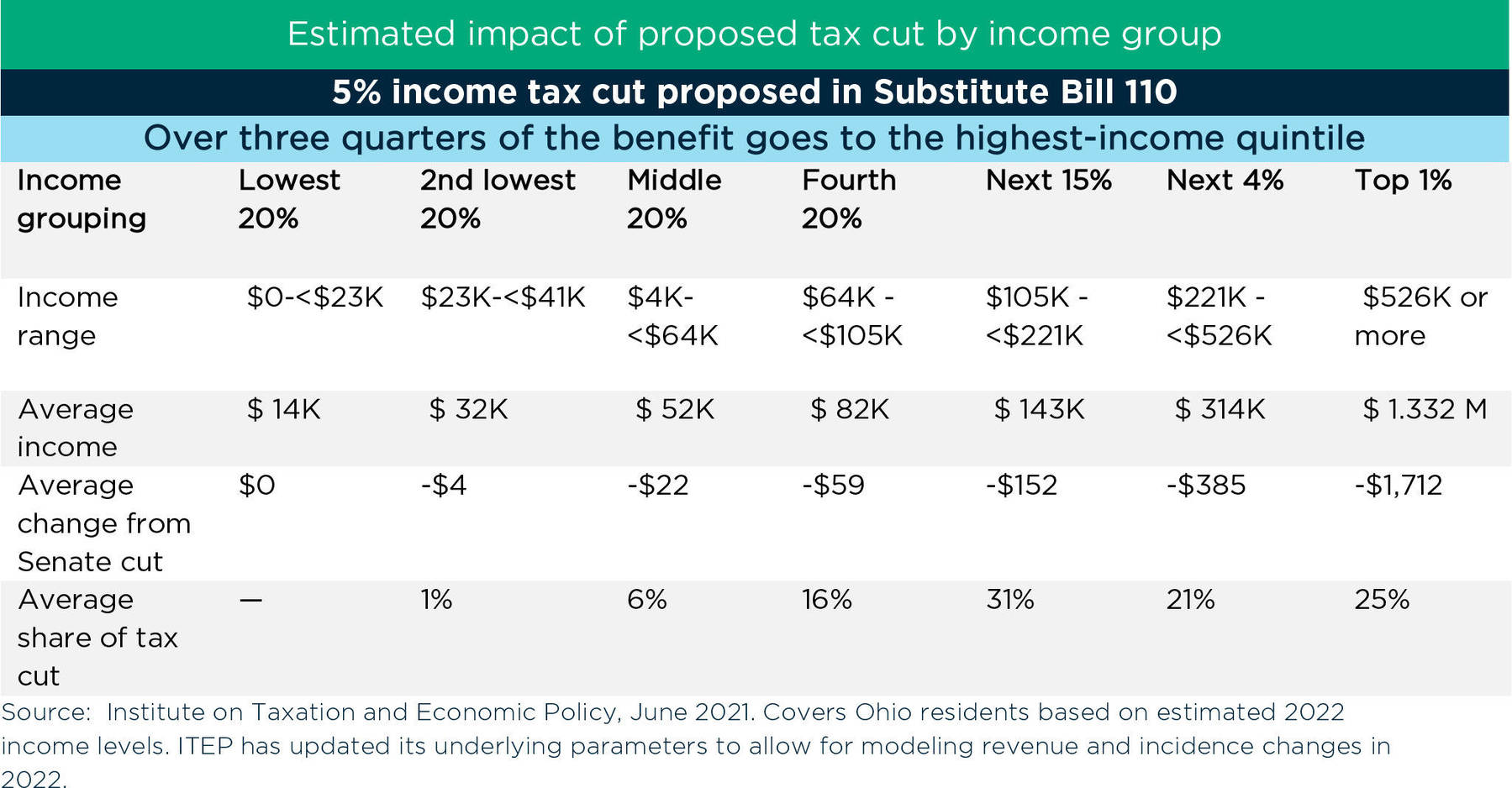 The tax reductions in the Senate bill come on top of huge tax cuts the richest Ohioans have received over the past 16 years. While lower- and middle-income Ohioans on average paid the same or more in state and local taxes, the top 1% received more than $40,000 a year in tax cuts.

A refundable EITC would help people who need it

Full-time jobs in many of the occupations hardest-hit in the pandemic pay so little that workers would receive no tax cut at all under the Senate plan. For example, the median income of a fast food/quick server is $20,363, while for waiters and waitresses, it’s $19,884.[3] Those making a bit more will still get little benefit from the Senate plan. Such workers may have left the labor force because they lack child care for their children, or they continue to have health-care concerns. But a 5% cut in the income tax would not help them: Many are paid too little to be subject to the income tax even though they are contributing to state and local revenue through other taxes and fees.

A better tax policy than a rate cut would be to add a refundable option to the state’s Earned Income Tax Credit.[4] Now, though on average they pay a larger share of their income in state and local taxes than more affluent residents, many of Ohio’s lowest-paid workers get little or no benefit from the state EITC. That’s because it is nonrefundable; it only will wipe out income tax liability, not provide a refund like the federal EITC and those in most states.[5] Ohio needs to add a refundable option to its EITC.

Ohio’s tax policy since 2005 has stripped the state of needed resources while increasing inequality. Instead of doubling down on that with more income-tax rate cuts, policymakers should reverse course and bolster the income tax on high earners.[6]

[1] Patton, Wendy, “Rebalance the income tax to build a better Ohio for everyone,” Policy Matters Ohio, Oct. 15, 2020, at https://www.policymattersohio.org/files/research/rebalanceincometax10-19-20.pdf

[2] Schiller, Zach and Wendy Patton, “House budget chooses tax cuts over more support for key public programs,” Policy Matters Ohio, April 15, 2021, at https://www.policymattersohio.org/research-policy/quality-ohio/revenue-budget/tax-policy/house-budget-chooses-tax-cuts-over-more-support-for-key-public-programs ITEP has updated its analysis since this earlier report, which used 2019 income levels, so the incomes of the top 1% were a bit lower then. However, that would only change the savings slightly.

Budget proposal leaves out anyone making $22,150 or less