What is the vendor discount?

Under Ohio law, retail stores get a tax break for collecting the state and local sales tax and paying it on time. The state’s tax expenditure report says: “A 0.75 percent discount on sales tax collected by vendors, and on use tax collected by out-of-state registered sellers, is granted if the tax due is remitted by the due date of the tax return.”

How much does it cost?

The Ohio Department of Taxation estimates the General Revenue Fund will get $59.7 million less in fiscal year (FY) 2018 and $61.5 million less in FY 2019 because of this tax break. It grows fast, too: by 3.6 percent a year over the two-year budget period, higher than the rate of inflation and higher than growth of the state budget.

The biggest retailers benefit most. Tax Commissioner Joe Testa testified that Ohio’s discount for vendors “essentially functions as a profit center” for big-volume retailers.[1] In 2017, just 0.7 percent of vendors – those that each collect more than $1 million a year, or the very biggest ones – got more than 60 percent of the value of the tax break (Table 1).

This tax break wasn’t intended to create jobs. Initially, this kind of discount was used to pay retailers for their time and effort in collecting, accounting for and remitting the sales tax. Today, computers and electronic filing make this task easier than in 1981, when it was first enacted.

What are the trade-offs?

Ohio could use the revenues from this tax break for many underfunded services. State support for libraries has not been restored to pre-recession levels. Schools have 3,200 fewer social workers, guidance counselors and art, music and gym teachers than in 2005.[2] Ohio funds public transit at a level far below what its own statewide transit needs study recommends. Local governments get $1 billion a year less from the state today than in 2010, and the state took another $35 million from cities in the FY 2018-19 budget. Residents and communities have many unmet needs because of insufficient state funding.

Do other states have a vendor discount?

Ohio is one of only 12 states that give this kind of discount and don’t cap it at a maximum level. Many states have chosen not to give this discount to vendors. According to the Federation of Tax Administrators,[3] the majority of the 28 states that have such a discount place a limit or cap on the size of discount any one vendor can receive, ranging from a low of $30 to $15,000 per month or reporting period. By contrast, the largest Ohio vendors – those collecting taxes $1 million or more a year – get a discount of more than $31,000 per month on average. 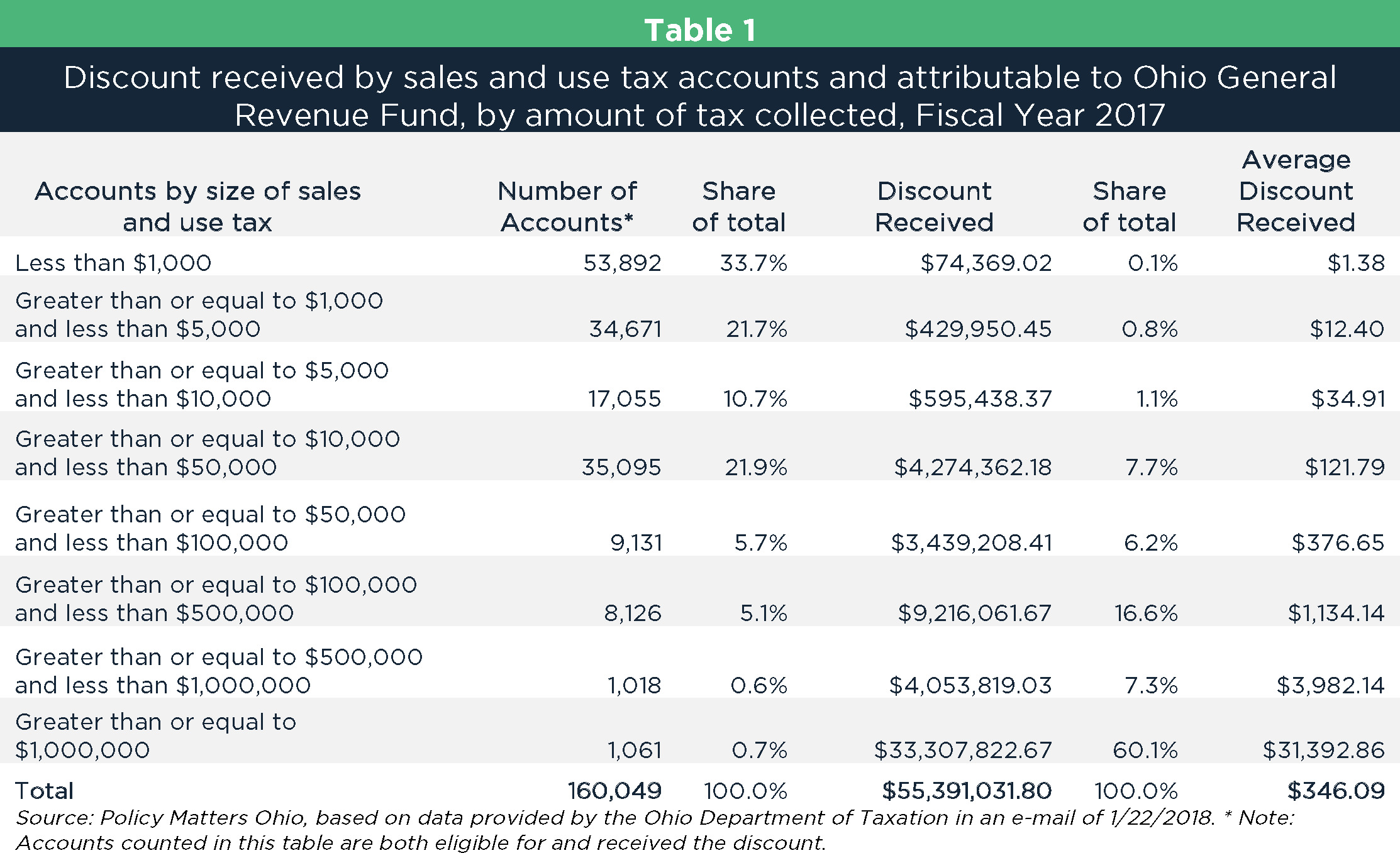 Is this a partisan issue?

Governor Strickland and Governor Kasich both recommended capping the vendor discount. Strickland’s cap was set at $3,000 per reporting period[4] and Kasich’s, in the FY 2016-17 budget, at $1,000 per month. The Kasich proposal would have reclaimed $50.7 million for public services during the course of the two-year budget. Both approaches retained the discount and neither would have affected most vendors. Kasich’s recommendation would have, on average, only affected the largest retailers, like Walmart (see Table 1). The General Assembly rejected both proposals.

The Tax Expenditure Review Committee should evaluate this tax break against the needs of the people of Ohio. At a minimum, it should be capped. The millions of dollars this tax break gives Ohio’s biggest retailers should be spent on schools, roads, childcare, public health, clean water and other programs that make life better for all Ohioans.

[4] Vendors have different filing dates based on size of collections and in some cases, product. See Ohio Dept. of Taxation, 2016 Annual Report, Exhibit 2: Types of Sales Tax Returns and Filing Payment Dates, p,93 at http://bit.ly/2nMFdSA

Limiting Loopholes: A Dozen Tax Breaks Ohio Can Do Without
September 29, 2008

Limiting Loopholes: A Dozen Tax Breaks Ohio Can Do Without
September 29, 2008