Tax breaks should be reined in

Tax breaks should be reined in

The Ohio House of Representatives rejected Governor John Kasich’s plan to cut the state income tax and further shift state and local taxes away from the affluent to low- and middle-income Ohioans. That deserves applause – and the Senate should do the same. But the House also rejected some attempts by Governor Kasich to tighten up certain tax breaks that unnecessarily cost Ohio valuable revenue. These steps need to be restored and additional measures taken to rein in unproductive exemptions, credits and deductions.

A key example is Kasich’s move to require suppliers to a number of distribution centers pay a minimum amount of the state’s main business tax, the Commercial Activity Tax (CAT). While the tax break he targeted may sound obscure, the state taxation department estimates it will cost $169 million in the year beginning July 1 – and the actual value to those who benefit from it is more than half a billion dollars a year. State policymakers tell us Ohio needs to tighten its belt, but they need to tie a tourniquet around this tax break. It allows suppliers to qualified distribution centers (QDCs) that buy at least $500 million a year of goods, and ship at least half of them outside Ohio, to avoid paying the CAT on what they send outside the state. The original recipients of this tax break were suppliers of Cardinal Health, the big, Dublin (Ohio)-based drug distributor. Cardinal Health reported profits of $1.4 billion on $121.5 billion in sales in its last fiscal year.

Currently, the suppliers of nine companies including eight distribution centers benefit from this tax break. One precious metals refiner won inclusion in 2012 when it convinced the General Assembly it would move an existing refinery out of state if didn’t get the tax break for a new facility.[1] Some 97.5 percent of the property that qualified for the tax break last year was routed to the pharmaceutical industry. That tax break deprives Ohio’s General Revenue Fund of substantial dollars. It will be worth $169 million in the year beginning July 1 and $174.4 million the following year, according to the latest report from the Ohio Department of Taxation, released as part of Kasich’s budget. That’s a giant increase from the $25.5 million estimated for Fiscal Year 2008 (see Chart 1). This tax break is now the 16th largest of the 128 detailed in the state report. 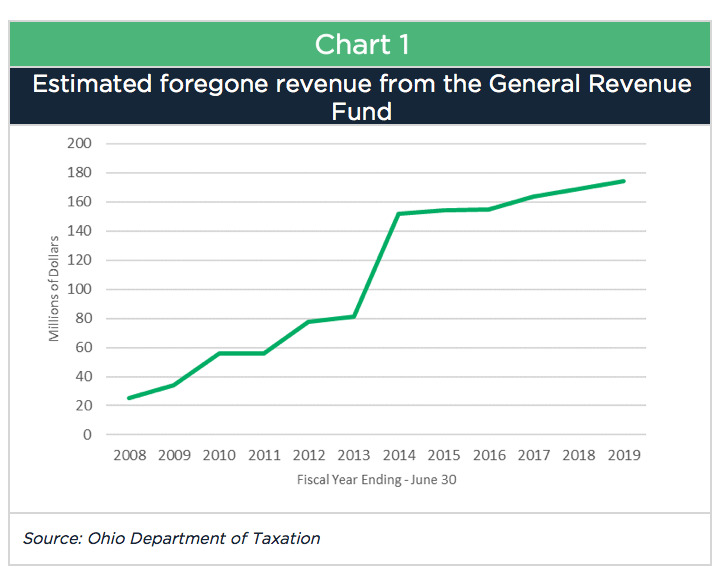 What’s remarkable beyond the growth of this tax break, though, is how much some of these companies receive. According to data from the taxation department, none of the products received at Cardinal Health’s facility in Groveport are being shipped into Ohio – and that’s been true since 2012. Table 1 below shows the proportion of sales at each of the qualifying distribution centers for which the Commercial Activity Tax is being paid. No CAT tax has to be paid on supplies of the requisite grade of gold, silver, platinum or palladium delivered to Elemetal; at four of the other seven distribution centers qualifying for the break this year, the percentage is below 10 percent. 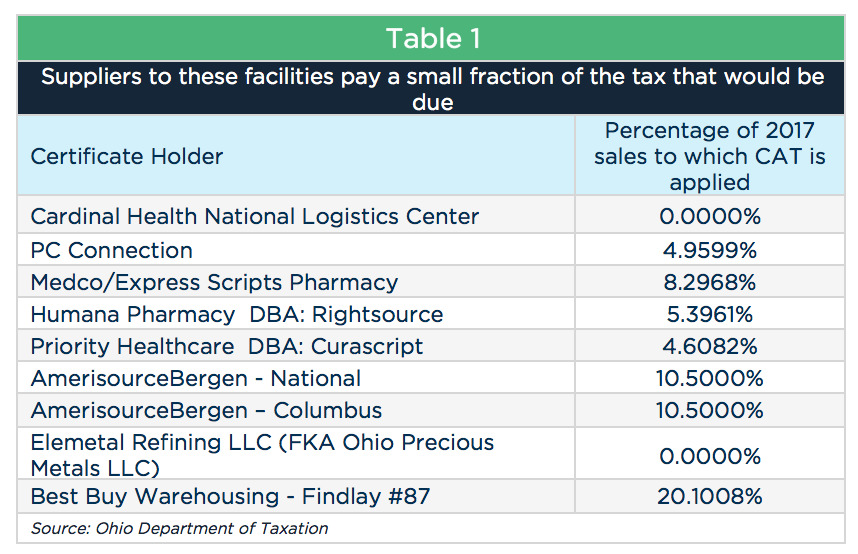 This deal is too good to be true. Budget Director Tim Keen explained in Feb. 1 testimony on the governor’s budget proposal that in recent years, this provision has been used as a tax planning device by the suppliers to the distribution centers to reduce their CAT tax liability to zero. In plain English, that means that companies are legally cutting their taxes to nothing through this tax break. One way that might be possible would be to rely on a different distribution center outside Ohio for shipments into Ohio, reducing or even eliminating shipments into Ohio and also the tax that would be charged on them.

Kasich’s proposal would require that suppliers pay the CAT tax on at least 10 percent of the receipts from goods they ship to these distribution centers. The administration estimates this would generate additional revenue of $5.1 million next fiscal year and $21.2 million the year after, Fiscal Year 2019. The 10 percent rate was based on an estimate of the share of goods from the distribution center sold in Ohio. The taxation department figured that shipments are made within Ohio and contiguous states,[2] and Ohio accounts for 25 percent of the region’s population, so that would appear to be a very conservative estimate.

The department’s analysis of the tax break, which it does for each one in the report, reveals that the value of the tax break to the companies that benefit from it is actually far more than $169 million a year.[3] The department pegged the value of the tax expenditure, as policy wonks call it, at a stunning $550.1 million in Fiscal 2018 and $567.5 million in Fiscal 2019. However, it figured that if the tax break were repealed, two large pharmaceutical distribution centers that have “extensive networks of distribution centers that can be used for rerouting shipments” would shift 70 percent of their business elsewhere. That would sharply reduce the amount of additional revenue the state would generate from repeal.

Governor Kasich made other sensible attempts in his budget proposal to reduce unproductive tax breaks that siphon needed revenue. For the second budget in a row, he proposed doing away with special discounts for paying certain taxes ahead of time. These included the 2.5 percent discount for paying the Other Tobacco Products Tax on time, and the timely payment discount available to beer and wine manufacturers and dealers. “The state should not subsidize or reward businesses for paying taxes on time,” Tax Commissioner Joe Testa said (see Feb. 9 testimony, p. 9) of the OTP tax discount.

The governor also proposed to tax companies on interest earnings that currently avoid taxation. As it is, some companies that make loans are not subject to the state’s Financial Institutions Tax, yet the main general business tax, the Commercial Activity Tax, doesn’t cover interest income. So they don’t pay tax on such income. “Applying the CAT to interest payments collected on loans would provide greater tax equity,” Testa noted. Estimated savings: $2.8 million in Fiscal Year 2018 and $3.9 million in Fiscal Year 2019.

Qualifying distribution centers have to pay a $100,000 annual fee to be eligible for the tax break. But that’s a pittance compared to the revenue the state is forgoing. To require that these suppliers pay the tax on at least 10 percent of what they ship is a small step. The Senate should restore – and increase – the Kasich proposal. That should just be the one measure in a more vigorous attack on unproductive tax breaks.