Testimony on HB 150 before the House Financial Institutions Committee

Testimony on HB 150 before the House Financial Institutions Committee

Good morning, Chairman Jordan, Ranking Member Crossman and members of the committee. My name is Zach Schiller and I am research director of Policy Matters Ohio, a nonprofit, nonpartisan organization with the mission of creating a more prosperous, equitable, sustainable and inclusive Ohio. Thank you for the opportunity to testify. The as-introduced version House Bill 150 should not be enacted. Ohio has many unmet needs. Cutting bank taxes would mean less money to educate Ohio kids, less money to make college affordable, less money to make sure our water is clean, less money to make sure our children aren’t poisoned by lead. You may have gotten the impression that this bill is aimed exclusively at community banks. That is not correct. In fact, a large share of the up-to-$65 million a year that the Legislative Service Commission estimates rate changes in the bill will cost would go to larger banks. The 2017 federal tax law cut taxes substantially for banks, including community banks. And there is little evidence that previous Ohio tax cuts have resulted in more jobs or a more prosperous Ohio. These facts alone should convince you that this bill as introduced should not move forward.

We have been told that a substitute bill will not include the changes in tax rates for the different brackets included in the as-introduced version of the bill. If so, we applaud that change. Our testimony reflects the bill as it was introduced.

In 2012, the General Assembly created the Financial Institutions Tax (FIT), replacing the corporate franchise tax (CFT) and the dealers in intangibles tax that previously had been assessed on financial institutions. In his testimony supporting the creation of the FIT on March 21, 2012, then-Tax Commissioner Joe Testa described some of the legal ways that banks were finding to game the tax system of the time. By tying the new tax to banks’ equity capital on financial regulatory reports, Testa said, it would close “a loophole that is eroding the base of the current tax through aggressive tax planning by a small (but growing) number of large institutions.” Since the new tax was to be revenue-neutral, rates would then be effectively cut for many institutions. “Smaller community banks that are paying under the old CFT could see an effective reduction in their tax burdens of up to 39 percent,” Testa said. While the eventual law passed included a different rate structure, the rate for banks with total equity capital of $200 million or less was the same as what Testa proposed.

If anything, the new tax should have been set at a level to raise more revenue, not just to make up for this big giveaway. Even as Ohio bank deposits and output from the state financial sector grew in the years prior to the creation of the FIT, taxes collected from those institutions stagnated (see Policy Matters Ohio’s 2012 report “Bank Tax Cuts Loopholes, Reduces Rates”). Yet, the FIT was set to be revenue-neutral. Indeed, the law included triggers to ensure that if it produced significantly more or less than the expected amount, the rates would be reset. This history suggests that it would be inappropriate to reduce bank taxes.

According to the LSC, the rate changes in HB 150 would cut the tax by up to $65 million a year—a big reduction, given that this tax brought in $202 million in Fiscal Year 2019. Though the short title of the bill is “The Community Bank Tax Relief Act” and previous testimony has suggested that it would help small community banks – which it would – it also cuts rates for larger banks. Based on 2017 tax year data from the Department of Taxation, Ohio’s 10 largest banks, with total Ohio equity capital of at least $1.3 billion apiece, each would save $800,000 a year. There are 24 banks in the next largest set of banks, those with Ohio equity capital of between $200 million and $1.3 billion. They, too, would save $800,000 apiece. So the largest 34 banks in the state together would save $27.2 million a year from this provision.

The LSC fiscal note assumes that another provision in the bill, excluding newly created banks from the FIT, would have a minimal fiscal impact. However, it goes on to say that this “assumes that bank mergers, acquisitions, or reorganizations do not give rise to the creation of a new bank for purposes of this bill.” If this bill does go forward, this is a loophole that needs to be plugged. There should be no way that a bank created from a merger, acquisition or reorganization should benefit from a zero tax rate.

The banking industry received a large federal tax cut with the U.S. tax bill approved in December 2017. Here is how a headline in the industry publication American Banker described fourth-quarter 2018 earnings: “Bank earnings more than double thanks to tax cut.” (Feb. 21, 2019) The article said: “For all of 2018, banks reported a 44% jump in net income to $236.7 billion, which included the benefits of a lower tax rate. Community banks reported a 29.4% increase in net income, to $26.1 billion, for 2018. Without the tax cut, community banks would have had an estimated 10.7% increase in earnings and banks overall would have had a 13.6% increase.” This chart was part of the story: 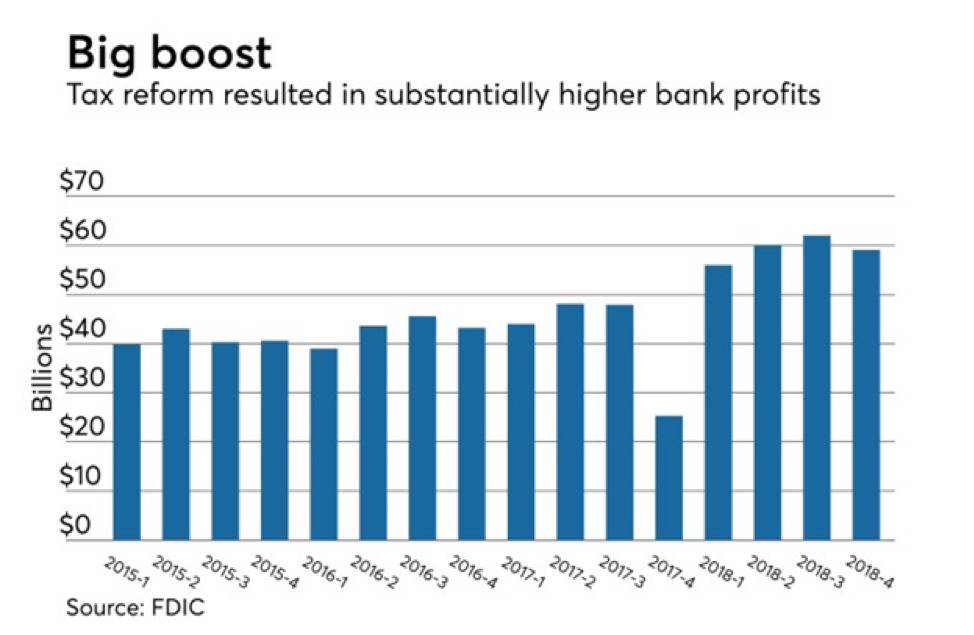 Bloomberg summarized the results this way:

“Major U.S. banks shaved about $21 billion from their tax bills last year -- almost double the IRS’s annual budget -- as the industry benefited more than many others from the Republican tax overhaul. By year-end, most of the nation’s largest lenders met or exceeded their initial predictions for tax savings. On average, the banks saw their effective tax rates fall below 19% from the roughly 28% they paid in 2016. And while the breaks set off a gusher of payouts to shareholders, firms cut thousands of jobs and saw their lending growth slow.”[3] Bloomberg based its tally on a review of financial results and commentary from the 23 U.S. banks the Federal Reserve deems most important to the nation’s economy in annual stress tests.

This raises questions about the tax cuts proposed in HB 150. Why should we expect that tax cuts in Ohio will lead to more lending, more hiring and a stronger Ohio economy? This has certainly not been the result of other tax cuts the state has approved in recent years. Ohio needs to invest more in its people. To cite just one example: We need to increase the number of families eligible for the state’s public child care program. In his proposed budget, Governor DeWine held off on including an increase in child-care eligibility to 150% of the federal poverty rate, and the ultimate budget bill did not expand eligibility though that is badly needed. Even now, a new school funding formula is being discussed to overhaul our unconstitutional funding system. These are just a couple of the many needs Ohio has. We urge you to oppose the as-introduced version of this bill and use these revenues instead to help better educate Ohioans, assist local governments, and provide the services our residents need.