Testimony on tax expenditures to the Senate Ways and Means Committee

Testimony on tax expenditures to the Senate Ways and Means Committee

Tax expenditures deserve to be examined and debated just as state spending is. Many tax expenditures have continued for decades, draining state revenue, providing a special advantage to certain taxpayers, without an accounting for whether they serve their original purpose or even what that purpose is. Others are as new as the current biennial budget.

Chairman Schaffer, Ranking Member Tavares and members of the committee: Thank you for the opportunity to testify today on tax expenditures in Ohio. I am Hannah Halbert, policy liaison for Policy Matters Ohio, a nonprofit, nonpartisan research institute with offices in Cleveland and Columbus.

Policy Matters Ohio is glad that the committee has taken up this important subject. Tax expenditures deserve to be examined and debated just as state spending is. Many tax expenditures have continued for decades, draining state revenue, providing a special advantage to certain taxpayers, without an accounting for whether they serve their original purpose or even what that purpose is. Others are as new as the current biennial budget.

As the Taxation Department says in the most recent Tax Expenditure Report, “In essence, a tax expenditure has the same fiscal impact as a direct government expenditure.” A good example of this came with the elimination of the tax credit for investing in machinery and equipment in 2005. It was replaced by a grant program that did the same thing. In one case, the money came out of a tax credit that reduced revenues; in the other, by the state writing a check.

Some tax expenditures have existed for decades with no scrutiny. For example, brewers and beer importers receive a credit on beer and malt beverage taxes they pay just for paying part of them a few weeks in advance. This credit, estimated to cost $1.4 million a year, dates to 1963.

If a purpose for a specific tax expenditure cannot be clearly identified, the tax expenditure should be scrapped. We urge the committee to recommend approval of the review process that was included in the Senate budget bill, both for new and existing tax expenditures.

We would suggest that you add automatic sunsets to that review process. In Oregon, for example, nearly all state income-tax credits sunset every six years; a third come up for review every two years. Ohio could require that a quarter of its existing 128 tax expenditures expire every two years, in line with the Senate’s budget bill, which called for all of them to be reviewed over an eight-year period.

Policy Matters Ohio published a report in 2008 identifying a dozen tax loopholes that the state can do without. A list from the report is attached to this testimony. One example: Big companies that lost money years ago are allowed to write off those losses against the commercial activity tax – a tax break not available to small companies. Under the old corporate franchise tax that has now disappeared for most companies, the right to write off losses against future income was a benefit earned based on generating profits in the future that could be taxed. Now, of course, there is no tax on such profits and no risk that they will be taxed. Thus, it no longer makes sense to allow such companies to write off those losses.

Our list from 2008 is hardly comprehensive. In 1963, nine years before the U.S. Environmental Protection Agency was created, the Ohio General Assembly approved a new sales-tax exemption for pollution-control equipment. This fiscal year, according to the state taxation department, the cost of this exemption will be $17.3 million. Most of the equipment purchases utilities make for pollution control are mandated by environmental rules. Thus, by providing the sales-tax exemption, the state is providing an incentive for something that would be happening anyway. This leads one to wonder:  Exactly what is the purpose of this tax break?

Unfortunately, tax expenditures do not consist only of decades-old exemptions that remain on the books for lack of scrutiny. The General Assembly approved multiple new tax expenditures as part of the budget bill. One, dubbed by some ‘the Bambi exemption,’ excludes from the sales tax building materials used in livestock structures for captive deer. A new tax credit for investment in small businesses was dropped into the budget bill with no public review—and nothing resembling the analysis that the Senate budget language would have required.

We agree that, as provided in the Senate budget bill, the tax expenditure review process should include an examination of how many taxpayers benefit from each tax expenditure (at least for the 95 breaks listed in the report worth more than $1 million). In addition, with income-tax breaks, it should look at the income levels of those receiving the benefit. Fred Church of the taxation department described this in earlier testimony, and the taxation department did this for a few tax expenditures in its 2009 report. It found, for instance, that in 2006, 6,591 Ohio taxpayers with income over $500,000 saved $10 million because of an income-tax exemption for Social Security and railroad retirement benefits. They don’t need it.

We urge the committee to look not just at the 128 tax expenditures listed in the Tax Expenditure  Report, but at other elements of the tax law that have the same effect. As Mr. Church previously testified, estimates of sales-tax revenue foregone from untaxed services are no longer included in the report. The sales tax is defined in state law to cover sales of tangible property; services are not covered unless they are specifically included under the tax. Thus health services, a very large share of our economy, are excluded. Also excluded are construction services, though their exclusion is estimated at nearly $1 billion a year in a recent analysis by Prof. William Fox of the University of Tennessee. Nor will you find a sales-tax exemption for lobbying, though those who employ lobbyists do not pay the sales tax. In 2003, Gov. Taft proposed extending the sales tax to a number of these services, such as real-estate transactions, debt collection and lobbying. These should be considered in your review.

Nor does the report cover local property-tax credits and reimbursements, though these are a creation of state law. Both Gov. Voinovich and Gov. Taft attempted to set a ceiling for the two property-tax rollbacks, so that they would not go to owners of the most expensive homes. When he was House Speaker in 2007, Jon Husted similarly attempted to means-test the homestead exemption, which was significantly expanded. At that time, Policy Matters Ohio found that doing so would save more than $100 million a year. The number no doubt would be greater today, as the amount of homestead exemptions was $364 million in 2010, up from the projected $260 million when the law was enacted in 2007.

There are good reasons, some of them outlined above, to limit or eliminate many tax expenditures. Doing so in order to cut tax rates, however, is unlikely to spur Ohio’s economy. We have recent evidence of this. In 2005, the corporate franchise tax, portrayed as a Swiss cheese because of its many exemptions and credits, was voted out of existence for companies except financial institutions. At the same time, the tangible personal property tax was also phased out, while the commercial activity tax was created. The overall number of exemptions and credits was not reduced as drastically as one might think, because new ones were created that could be used with the new CAT tax, and some corporate franchise tax credits were transferred so they could be used against the CAT. Still, the number of tax expenditures was reduced by 15. The effect of the business tax changes, the tax department has estimated, was a reduction in business taxes of $1.8 billion a year. Separately, of course, the individual income tax was also slashed.

Did it work? In a word, no. Ohio has lost more jobs relative to the rest of the nation since the tax overhaul was approved in 2005. Ohio has lost 5.8 percent of its jobs since then, while the country has lost 1.8 percent.

We strongly support your efforts to review tax expenditures, and believe that significant amounts of revenue can and should be made available by limiting or eliminating unnecessary tax breaks. This revenue is badly needed to invest in Ohio’s people. Thank you very much for the opportunity to testify.

Table 1 lists some loopholes, estimated foregone state revenue and the year each loophole was approved. 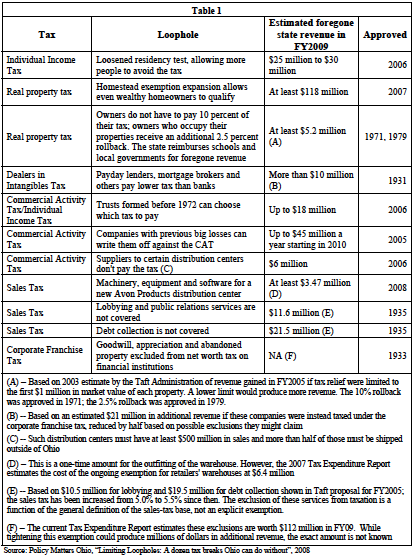