The good and the bad in the House tax plan

The good and the bad in the House tax plan

By Zach Schiller and Wendy Patton

The tax plan approved by the Ohio House last week would sharply limit an income-tax break for business owners that costs more than $1 billion a year while providing few benefits to the Ohio economy.[1] At the same time, it would eliminate the bottom two brackets of the income tax and cut rates by 6.6%. This report examines the effect of these changes on Ohioans of different income levels. The tax cuts would go mostly to those with higher than average incomes, with only a relatively small amount going to the lowest-income Ohioans. In dollar terms, those benefitting the most under the House plan on average had already gained from the state’s tax changes over the past 15 years. The poorest fifth of Ohioans, who pay the largest share of their income in taxes of any income group, would see only modest gains; more than three-quarters of them would not see any reduction in taxes. So while the richest Ohioans would pay a more, a step in the direction of fairness, the plan would not reverse most of the tax shift to the poorest Ohioans that has taken place since 2005. 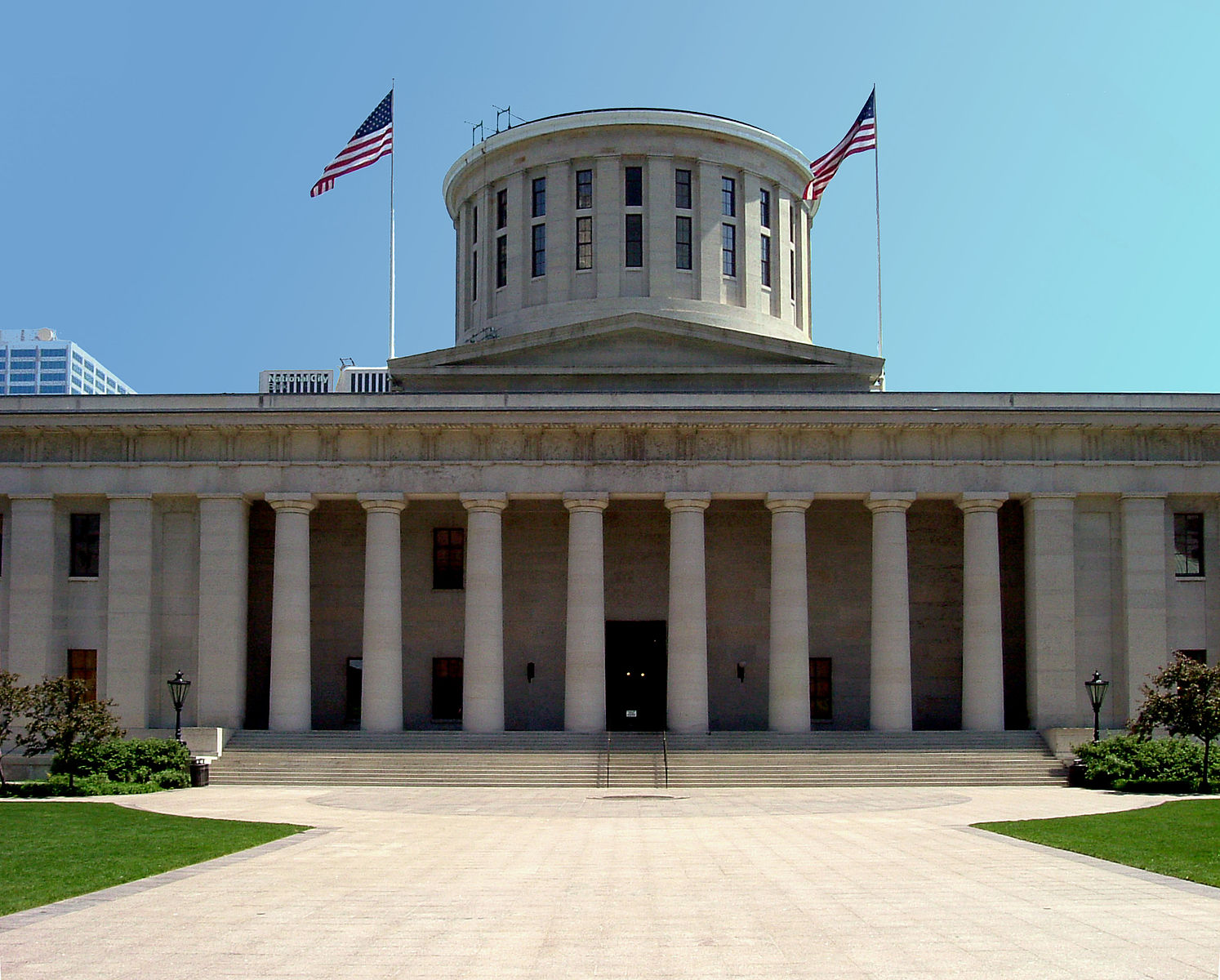 These conclusions are based on an analysis of the tax changes for Policy Matters Ohio by the Institute on Taxation and Economic Policy (ITEP), a Washington, D.C., based nonprofit with a sophisticated model of the state and local tax system.

By contrast, if some of the proceeds from cutting the business income deduction were used instead to add a refundable 10% Earned Income Tax Credit (EITC), more working low-income Ohioans would benefit and those who did would benefit more. ITEP estimates this would cost about $170 million a year. The rest of the $528 million total that would be generated by limiting the business income deduction, often known as the LLC loophole, would be better spent investing in essentials like child care and aid to foodbanks. 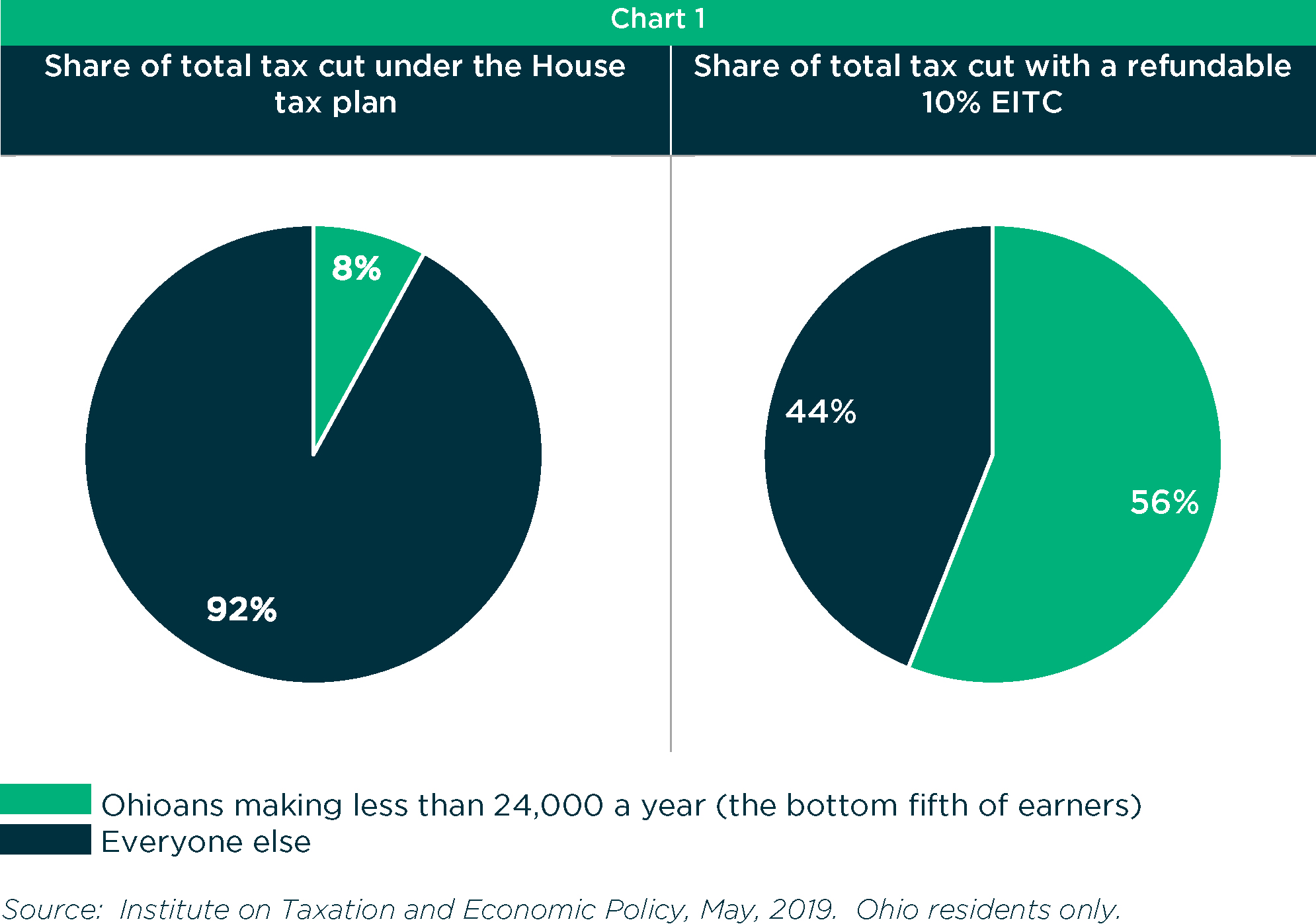 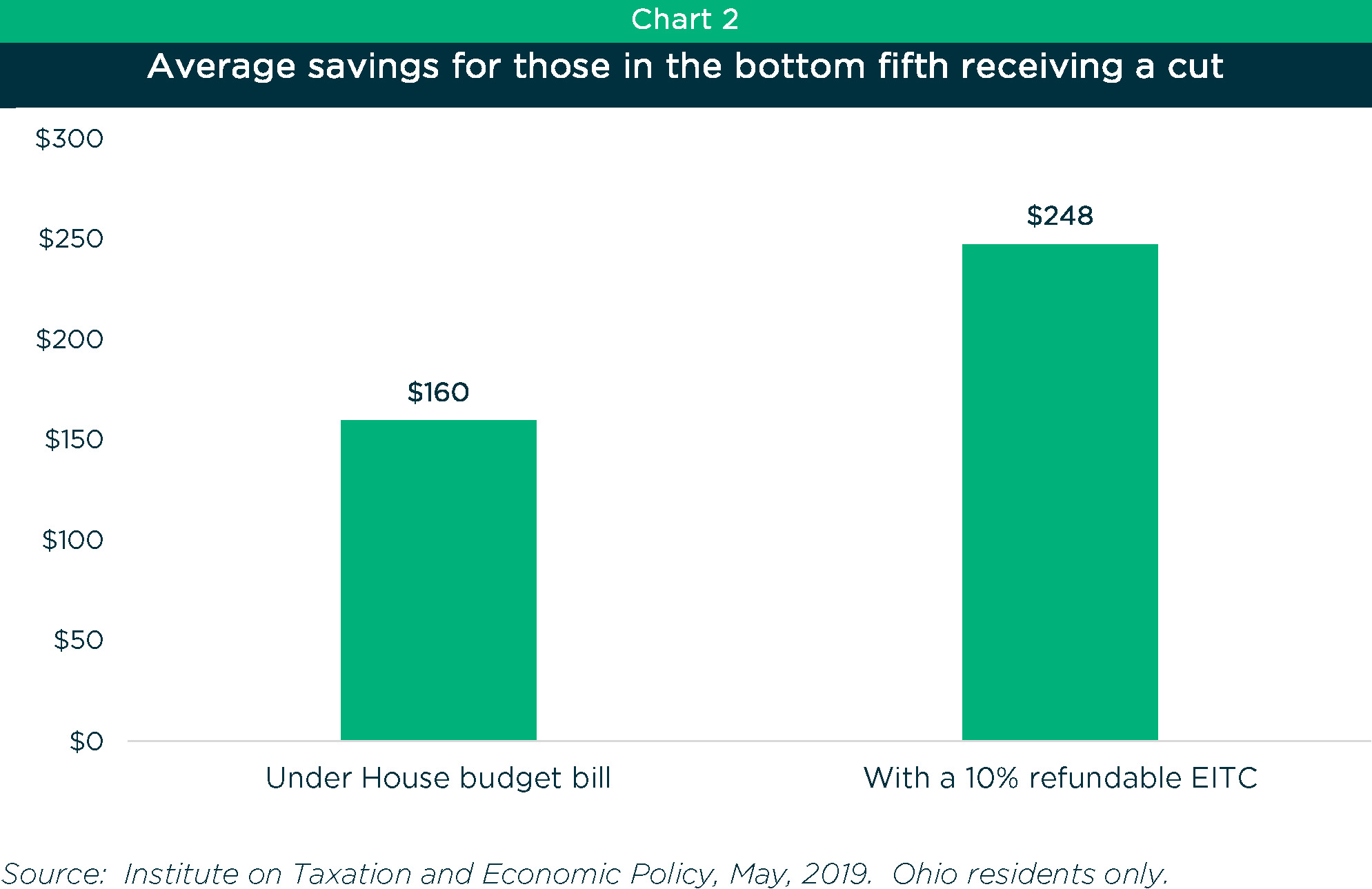 The House tax plan would reduce the income-tax break for owners of passthrough businesses, so named because the income is taxed under the personal income tax as it passes through to the owners. It would reduce the deduction to $100,000 from the current $250,000, while also eliminating a special, 3% rate paid on business income above that amount, which otherwise would be taxed at nearly a 5% rate. This tax break has not brought an increase in first-time hiring by new businesses, while the growth of passthrough entities has continued to trail the national average.[2] Overall Ohio job gains have lagged behind the nation’s. The forecast used by the state to put together its next two-year budget says that Ohio will continue to fall behind the country over the next two years in economic growth, personal income, nonfarm employment and retail and food service sales.[3]

The LLC Loophole heavily benefits the most affluent. In 2017, just 7.4% of the tax filers who used the deduction, those claiming passthrough income of $200,000 or more a year, received 43.4% of the deductions—and that doesn’t include the additional tax break for those making over $250,000.[4] This has further slanted our tax system in favor of those who need such treatment least. Thus, cutting it back is a win for Ohio. It brings a measure of tax fairness, while generating needed revenue.

ITEP found that only 1% of Ohio tax filers would pay more under the House bill. Virtually the entire increase in taxes from limiting the deduction and eliminating the special 3% rate would be paid by those in the top 5% of Ohio taxpayers, making $208,000 or more a year. And four-fifths of it would be paid by the top 1%, who make at least $496,000. Yet because these taxpayers were so favored by tax cuts over the past 15 years, they would still be left with a net large average tax decrease compared to what this group was paying in 2004.

Low-income Ohioans pay nearly twice as much of their income in state and local taxes as the richest Ohioans do.[5] But many pay little or no income tax. First, this is because it is a graduated tax, based on the ability to pay. It is also because the existing $10,500 threshold for paying the tax, plus personal exemptions and the existing, non-refundable state Earned Income Tax Credit, wipe out all or most income tax liability for many of the poorest taxpayers. For instance, a single working parent with two children and income of $20,000 pays no income tax now.

Upper-income taxpayers benefit more from across-the-board rate cuts than other taxpayers, because under a progressive tax system like Ohio’s, they pay higher rates and those rates are cut more. That’s why ITEP found that 57% of the bill’s tax cuts would go to the fifth of tax filers making $101,000 or more. While eliminating the bottom two brackets helps some moderate- and low-income taxpayers, the 6.6% rate cuts skew the overall benefits to those making much more. And most middle-income taxpayers will get a cut that they’ll barely notice: An average of $64 for those receiving a cut among the middle fifth of tax filers, who make between $42,000 and $63,000 a year.

The federal EITC is the nation’s most powerful anti-poverty program. It is only available to working families. The General Assembly passed a transportation budget that increased the state EITC to 30% of the federal credit. As helpful as the state EITC is, with that improvement, it does not do enough to help the poorest Ohioans because it is not refundable. That’s because under current policy when the credit is in excess of state income tax paid, you get no refund.[6]

Moreover, ITEP found in a previous study that the poorest fifth of Ohioans on average saw by far the biggest boost in taxes from the major state and local tax changes over the past 15 years. While numbers from that study are not exactly comparable to the analysis in this report, the House tax plan would reverse only about a quarter of the average tax increase experienced by the poorest Ohioans. By contrast, a refundable 10% EITC would save them double that amount. The refundable EITC does a far better job than the House tax plan of reversing the tax shift the state has seen.

How we could use revenue from the LLC Loophole

Apart from a refundable EITC, the proceeds from tightening the LLC Loophole would be better spent addressing Ohio’s needs than on cuts to income-tax rates and brackets. One obvious use would be to support a new K-12 school funding formula. There are many others as well.

Ohio’s ranking among states in overall health indicators is near the bottom and today we remain near the top for deaths due to the drug epidemic, despite important progress. Investment in children remains inadequate for child care and early education. Our infant mortality rate is higher than 42 other states. College in Ohio remains prohibitively expensive: Ohio is ranked 45th highest in college costs with community colleges and public universities costing 11.5 percent and 14.5 percent more than the national average, respectively. Local governments throughout Ohio work with $1.5 billion less a year than they had in 2010, due to the state’s elimination of tax authority, phase-out of tax reimbursements and cuts to revenue sharing. The needs, in short, are great. Some of the many ways the $528 million from downsizing the LLC loophole could be used are shown below:

Under the House bill, the most of the top 1% of Ohio earners, who average earnings of more than $1.2 million a year, see a tax increase. The revenues are spread so that most Ohioans who receive a tax cut will hardly notice it. Most of the poorest Ohioans get no benefit from it at all. The General Assembly should approve the changes in the LLC Loophole in the House tax plan, but use them for a different purpose: Providing more meaningful tax cuts to the poorest Ohioans, and investing in services we need.

[4] Email from Ohio Department of Taxation, Ohio Personal Income Tax, Business Income Deduction, Taxable Year 2017, April 12, 2019. Meanwhile, more than three-quarters of those using the deduction that year claimed less than $50,000; more than 86% claimed $100,000 or less. As a result, the limitations in the House tax plan would affect a relatively small share of those claiming the business income deduction, as House Finance Chair Scott Oelslager has noted.