For too long, regular Ohioans have been asked to sacrifice their health, the education of their children, and the vitality of their communities to give tax breaks to the rich, to open needless loopholes, and to provide special treatment for wealthy corporations. The politicians who write state tax policy often justify these demands with promises of coming abundance and romantic divinations of future fortunes. However, the impact of Ohio’s tax legislation over the past 17 years is unambiguous. The people with the lowest incomes are paying more, the wealthy are receiving handouts, and the state is being drained of the resources it needs to ensure the prosperity of its residents.

Major changes in Ohio tax legislation since 2005 have led the 60% of Ohio households with the lowest incomes to pay more annual taxes, on average, while the richest 1% of Ohio households, with an average annual income of almost $1.5 million, now contribute an average of nearly $51,000 per year less than they once did. (See Figure 1.) The wealthiest 20% of households (making more than $107,000 per year) pay, on average, over $5,500 less annually than they did in 2005. The result is a state revenue shortfall of about $8 billion a year, stunting the state’s ability to provide the groundwork for a thriving society for years to come. 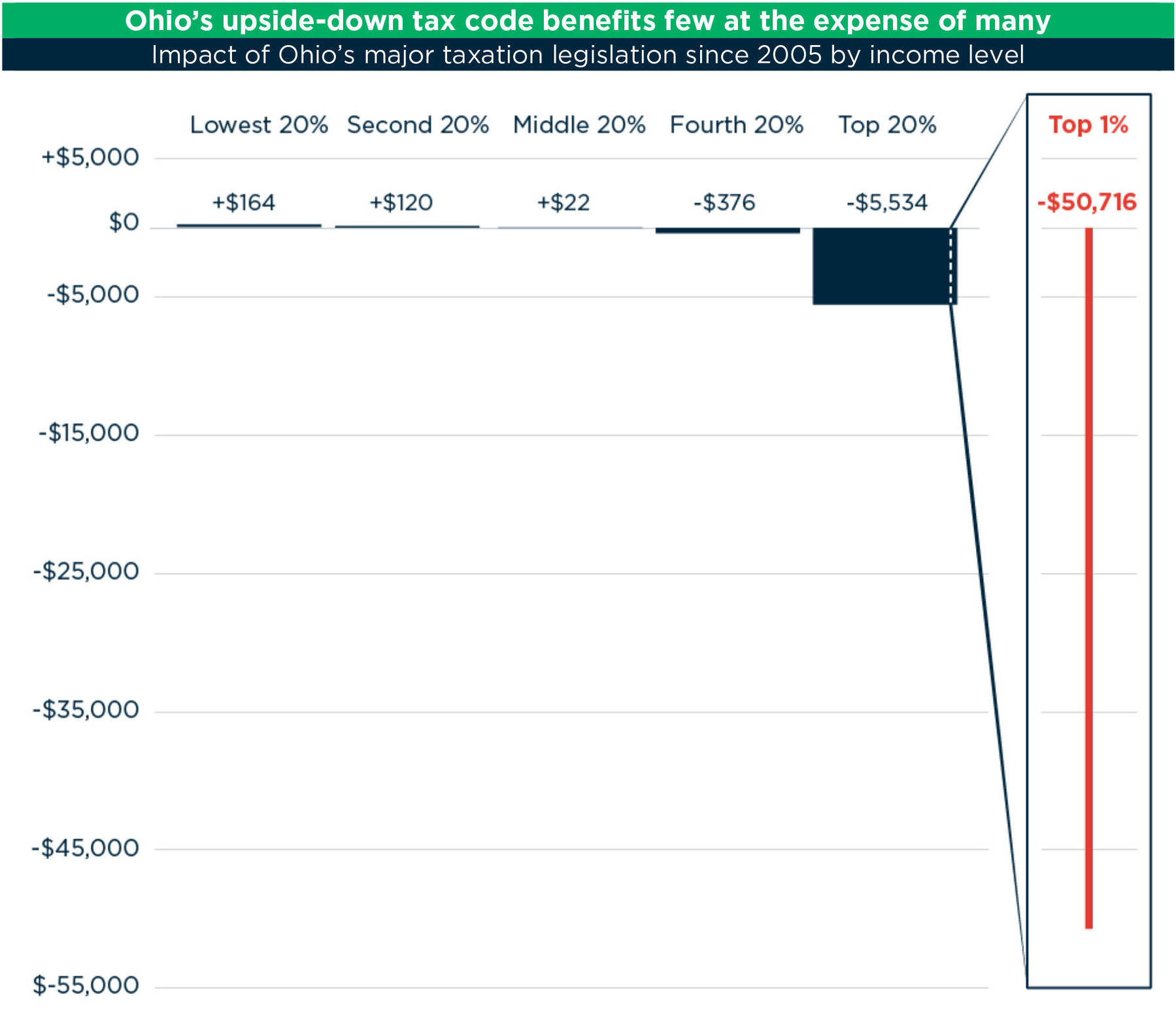 Source: Institute on Taxation and Economic Policy, December 2021, based on estimated 2022 incomes. Includes Ohio residents only. See appendix for further details of the analysis. Note: Estimates for “Top 1%” are also included in calculation of “Top 20%.”

These are some of the most significant findings of a new analysis conducted for Policy Matters by the Institute on Taxation and Economic Policy (ITEP), a non-partisan think tank with a long history of state-level tax analysis. ITEP used a sophisticated model of the state and local tax system to estimate the impacts of major tax legislation since Governor Taft’s 2005 State Budget Bill. These legislated changes include adjustments to the state’s personal income taxes, the restructuring of in-state corporate taxation, and changes made to sales and excise taxes. Figure 2 shows the estimated impact of major tax changes since 2005 on Ohioans in different income groups.

While the results for individual taxpayers vary, on average, those who have more have benefited most from recent legislation both in absolute terms and as a share of their income. Notably, the increases in the taxation of those paying more, concentrated among the 60% of Ohio households with the lowest incomes, has not offset the cost of the subsidies provided to wealthiest households. The result was a state budget shortfall of about $8 billion per year. This means people with the lowest incomes are paying for these changes both with higher taxes and by sacrificing basic services like health care, education and infrastructure.

Furthermore, Figure 2 does not account for the skewed impact of these tax changes in terms of Ohio’s demographic composition. The enduring legacy of racialized segregation is a major characteristic of Ohio’s demographic landscape: African American and Hispanic Ohioans[1] are disproportionately represented in the state’s poorest quintiles. According to ITEP data described in an earlier report, roughly 75% of Hispanic Ohioans and 79% of African Americans are in the 60% of Ohio households with the lowest incomes, while the number for white Ohioans is about 56%.[2] Meanwhile, 22% of white Ohioans are in the richest 20% of households compared to 8% of African Americans and 10% of Hispanic Ohioans. This means that Ohioans of color are significantly more likely to have pay a higher share of their incomes in taxes because of recent changes to the state’s tax code, while white Ohioans are more likely to be affluent and have benefited.

Breaking down the results

Ohio policymakers have made significant changes to personal income taxes over the past 17 years, lowering rates and making the structure more regressive. Since state lawmakers passed House Bill 66 in 2005, they have slashed income tax rates across the board, increased the threshold at which low-income households begin to pay taxes, and eliminated the top income bracket. The households with the lowest incomes benefited from a 30% Earned Income Tax Credit, but the impact is limited since the credit is nonrefundable. On the other hand, wealthy Ohioans have benefited especially from the Business Income Deduction (also known as the LLC loophole), which allows owners of many Ohio businesses to pay no taxes on the first $250,000 of business income and a reduced tax rate on business income above that threshold.[3]

The total effect of personal income tax changes has been a reduction of taxes for the majority of tax filers, but the bulk of those tax cuts has gone to the rich. As shown in Figure 3, 31% of the total value of personal income tax cuts has gone to the richest 1% of households, 76% to the richest 20% of households. Personal income tax rates are graduated based on income levels, so when they are cut across the board, the wealthiest households benefit most. In addition, the most recent budget bill especially benefited the most affluent by cutting out the top bracket and further reducing the top tax rate.[4] In terms of actual dollar value, the 20% of tax filers with the lowest incomes have received average annual income-tax cut of $73 while the richest 20% have gotten an average tax cut exceeding $5,880.

The income-tax cuts received by the three-fifths of Ohioans with the lowest incomes are more than outweighed by the deeply regressive policy changes made in other taxes since 2005. Taken as a group, the bottom 99% of Ohio’s households saw an increase in their tax contributions due to changes to sales taxes, excise taxes and business taxes. Meanwhile the richest 1% of Ohio tax filers now pays an average of nearly $3,000 per year less than they did before. (See Figure 4.) This reduction in taxes is driven by changes in the way corporate activity is taxed.

In 2005, House Bill 66 fundamentally restructured and lowered corporate taxes. The bill created the Commercial Activity Tax (CAT) and repealed both the Tangible Personal Property and Corporate Franchise Taxes. Ostensibly a means of encouraging entrepreneurship and levelling the playing field between manufacturing and other corporate activity, a main feature of the new business tax system was that the revenue collected was about half of what it had been before. In essence, the CAT taxes gross receipts, while the previous tax structure focused on profits and physical assets (machinery, inventory, etc.).[5]

Furthermore, the new taxation structure facilitates the transfer of the costs of taxes onto consumers in the form of increased prices and lower wages. Before 2005, the proportion of corporate taxation that was transferred onto the 60% of households with the lowest incomes amounted to 11% of the two major business taxes that were repealed that year. After the restructuring in 2005 the proportion of those corporate taxes passed on to that same consumer base more than tripled to 39%. In other words, the richest households passed the costs of providing the social and material infrastructure for their business onto lower-income consumers and workers, all while shortchanging state revenue collection by as much as $2 billion. This figure, in turn, was mostly offset by an increase in sales taxes, gas taxes and cigarette taxes, which disproportionally fell on the households with the lowest incomes.

Putting it all together

The cumulative impact of major tax legislation since 2005 is a revenue loss of about $8 billion a year and unmeasurable additional stress placed on Ohio’s families. This comes in a time when there is a clear need for state funding in areas such as education, health, infrastructure and social services. The 2021 State Budget Bill, for example, legislated a new Fair School Funding Plan without most of the needed funds.

If we had these resources on hand, we could make a lasting impact on Ohio families. Lawmakers could improve the resiliency of our health care system by expanding funding to locally based public health systems. They could help rebuild communities ravaged by the COVID-19 pandemic by restoring revenue-sharing with local governments. State revenue could increase access to high quality child care, do more to protect seniors in danger of abuse, and improve college affordability. Part of the missing tax revenue could help staff the Division of Industrial Compliance to fight wage theft and ensure living wages for home health care workers. Part could be directed to the Ohio Housing Trust Fund to fight homelessness. These are just a few of the pressing needs included in our 2021 People’s Budget and our Review of Ohio’s 2022-23 budget.[6]

Meanwhile, the prosperity promised by advocates of the current tax strategy remains wishful thinking. They have had their way in the Statehouse for years and yet, Ohio continues to fall behind the rest of the nation in terms of economic growth and job creation.[7] Seductive fortune-telling about the supposed benefits of recent tax legislation must be confronted with the concrete impact of these changes on regular Ohioans. Ultimately, the people with the lowest incomes are being asked to pay more, the wealthy are receiving handouts, and the state is being drained of the resources it needs to ensure the prosperity of its residents. Regular Ohioans can bear no more of this type of tax legislation. State lawmakers should ensure that the state has the resources to provide an equitable thriving society for generations to come by constructing a taxation structure in which Ohioans contribute according to their ability.

This report was made possible by the tireless support of Neva Butkus and Aidan Davis from ITEP, thank you.

The analysis presented in this report was derived from ITEP’s proprietary microsimulation tax model, which estimates the amount of federal, state and local taxes paid by residents of every state at different income levels under current law and alternative tax structures. The current iteration estimates the impact of Ohio’s major tax legislation since HB 66 in 2005 on Ohio tax filers. The model includes:

The model does not include estimates of the new Petroleum Activity Tax. It also excludes the elimination of the estate tax, and the taxation of casinos.

[1] Though we acknowledge that the term Hispanic is imprecise and limiting, it is the official terminology used in US census data, from which this figure is derived.
[2] Patton, W. (2021) Ohio’s tax structure and racial disparities. Policy Matters Ohio. This figure is 75% for those identifying with multiple races. https://www.policymattersohio.org/research-policy/quality-ohio/revenue-budget/tax-policy/ohios-tax-structure-and-racial-disparities

[4] As previously reported, the 2021 State Budget Bill did away with the top tax bracket and reduced the tax rate on income over $110,650 to 3.99%. Previously, the rate was 4.797% on income over $221,300 and 4.413% on income over $110,650. As a result, those making more than $221,300 were doubly benefitted by the new tax structure. Together, these two changes cut annual revenue by more than $400 million. Schiller, Z. (2021) Ohio tax cuts would go mostly to the very affluent. Policy Matters Ohio. https://www.policymattersohio.org/research-policy/quality-ohio/revenue-budget/ohio-tax-cuts-would-go-mostly-to-the-very-affluent

Ohio tax shift away from wealthy: The pattern repeats
August 08, 2019

Ohio tax shift away from wealthy: The pattern repeats
August 08, 2019