Twenty-two percent of working families in Ohio with one to three children under age twelve do not earn enough income to afford basic necessities like food, housing, health care, and child care, even during a period of national prosperity.

The same percentage holds for the Great Lakes states, according to Hardships In America: The Real Story of Working Families, a new study by the Economic Policy Institute. That's more than twice the the number of families who find themselves below the federal poverty line.

"This report shows that official poverty measures don't tell the real story of working families today, and it provides strong evidence of the need for policies that strengthen our social safety net and boost wages," said Heather Boushey, an EPI economist and lead suthor of the study.

The report examines the the cost of living in every community nationwide and determines separate "basic family budgets" - the amount a family would need to earn to afford food, housing, child care, health insurance, transportation, and utilities - for each community.

That differs from the government's poverty thresholds, which are figured essentially by tripling what food costs were years ago and adjusting for inflation.

In Ohio, basic family budgets for a two-parent, two-child family range from $30,599 in the Marietta area to $34,531 in the Cleveland area. The national median for such a family is $33,511, roughly twice the official poverty line of $17, 643 for a family of that size. "Policy makers need to reconsider their idea of what poverty is," said Zach Schiller, senior researcher at Policy Matters Ohio, which analyzed the Ohio data and released the report locally.

Nationally, two-and-a-half times more families fall below basic budget levels than below the federal poverty line, according to the report by Boushey and co-authors Chauna Brocht, Bethney Gundersen, and Jared Bernstein.

The reports other findings include:

"Work alone doesn't ensure a decent standard of living," said Boushey. "If the American Dream is to become a reality for all Americans, then there is a role for government in helping working families meet their basic needs."

The report includes policy proposals for raising the earnings of low-income and poor families, including a minimum wage hike, an expanded Earned Income Tax Credit, more comprehensive job training programs, and stronger pay equity policies that help ensure that women are paid as much as men.

Policies to boost income, however, are only part of a plan to ensure that all American families can afford a safe and decent standard of living, according to the report. Families that earn enough income to be ineligible for Medicaid, for example, are often still unable to afford private health insurance. These experiences indicate that Americans at all income levels need a stronger social safety net, including universal health insurance, federally funded child care for children of all ages, and affordable housing. 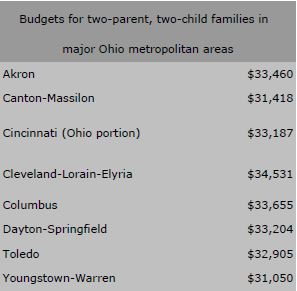 The Economic Policy Institute is a non-partisan national research organization based in Washington, DC.