All Ohioans need access to nutritious food. Every year, the Governor of Ohio has the opportunity to expand the economic security of children, adults, and families by maximizing federal food and nutrition assistance for communities across the state. 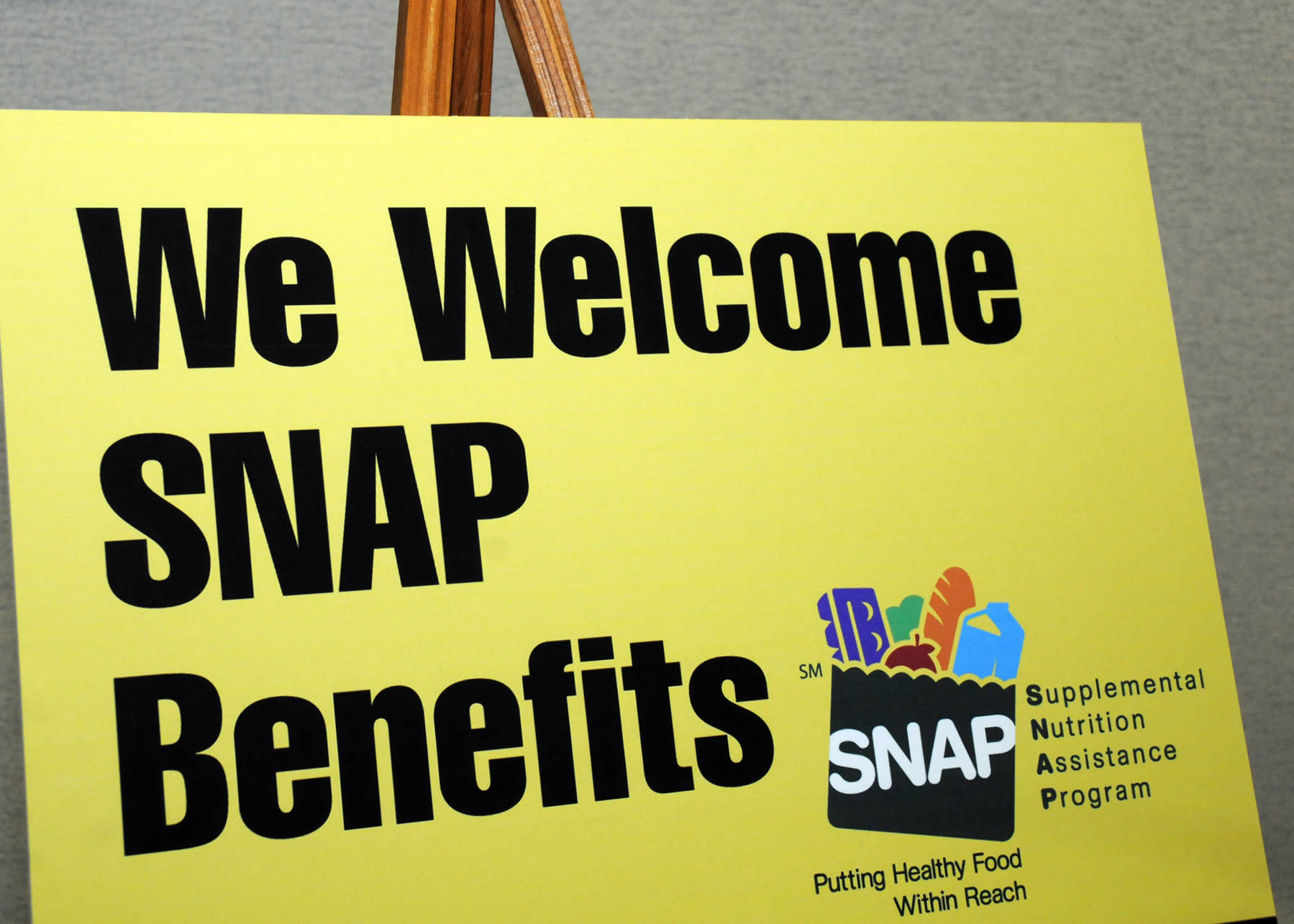 This brief outlines why food and nutrition assistance is critical for children, adults, and families in Ohio and how the Supplemental Nutrition Assistance Program (SNAP, formerly known as food stamps) time limits work. We find that: 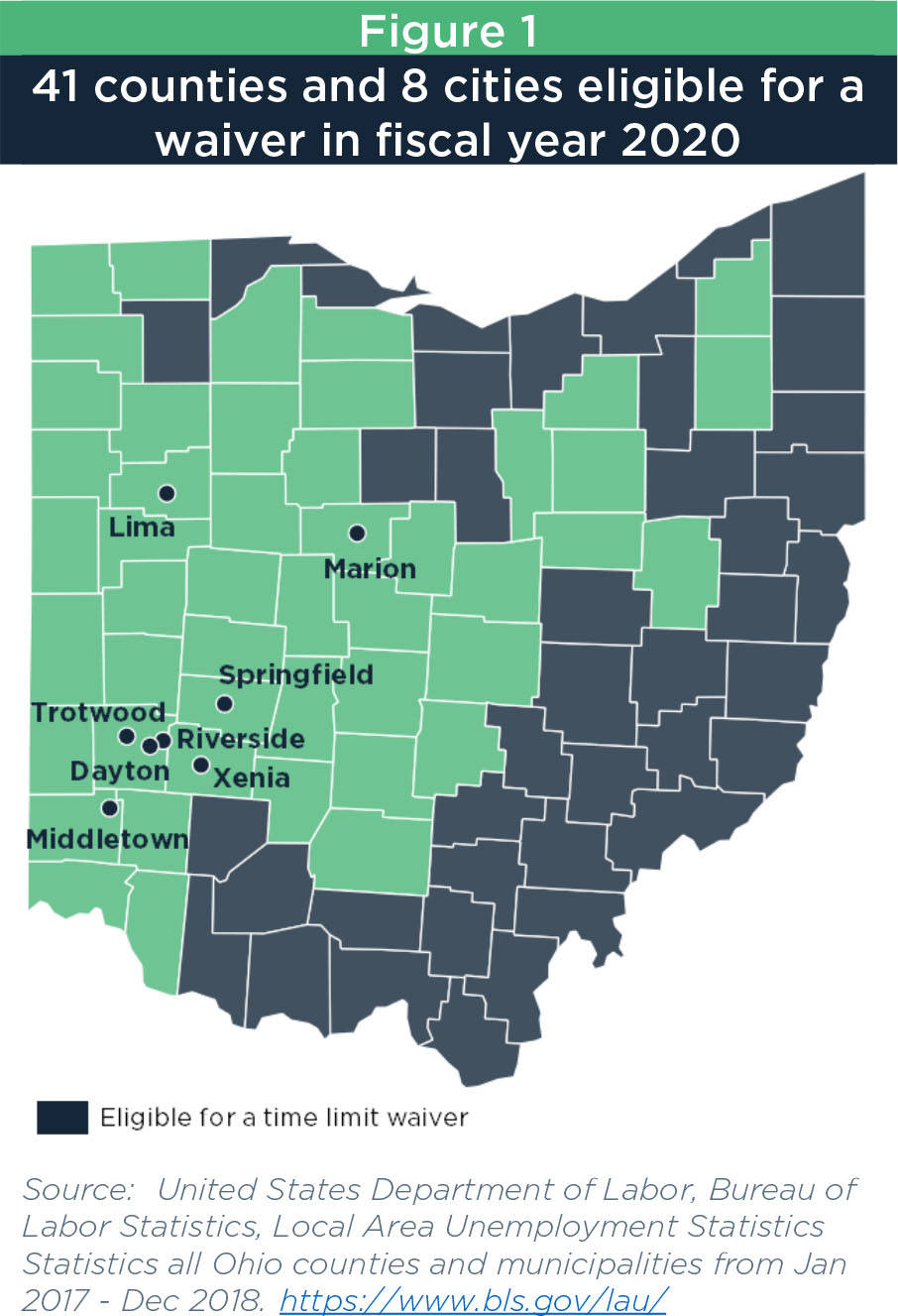 SNAP requires adults between the ages of 18 and 49 who are not disabled and do not have custody of children to work or participate work-related activities for a minimum of 80 hours a month. If people don’t meet the 80-hour requirement, they can only access SNAP for three months over a three-year period.

Ohio can request that the time limit be waived in jurisdictions with high unemployment. When a waiver is approved by the United States Department of Agriculture (USDA), adults who would otherwise be subject to the three-month time limit (and lose access to SNAP after three months) are able to continue receiving SNAP benefits.

Governor DeWine has an opportunity now to ensure that tens of thousands of Ohioans can get nutritious food by requesting a group of cities and counties be waived from the time limits. Based on unemployment rates, 41 counties and 8 cities are eligible for a waiver. We urge the DeWine administration to request a waiver in all eligible cities and counties.

Food is the most basic human need. In Ohio, over 1.69 million people struggle with hunger and food insecurity, including over 500,000 children.[1] Food insecurity is defined by the USDA as a lack of consistent access to enough food for an active, healthy life. The prevalence of food insecurity is a product of a low-wage economy, historical inequities and policy choices.

For instance, hundreds of thousands of Ohioans experience food insecurity because Ohio’s low-wage job market doesn’t pay enough to support all working families. Six of Ohio’s 10 most common jobs pay too little to feed a family of three without food assistance.[2] As the cost of food, housing, childcare, and healthcare continue to rise, more low-wage workers need SNAP support and local foodbanks to get by.

Food insecurity and poverty hurt entire households. When one member of a household loses food assistance, the entire household is affected. Evidence shows that food insecurity hurts everyone but is especially harmful to children’s development and well-being.[3] The Governor can ensure that the hundreds of thousands of Ohioans who struggle to put dinner on the table have access to healthy food.

Punitive changes to the federal food assistance system in 1996 make it more difficult for many Ohioans to regularly get enough healthy food.[4] This legislation established a time limit for how long certain individuals could participate in (and benefit from) the SNAP program. The law requires adults between the ages of 18 and 49 who are not disabled and do not have custody of children to work, or participate in job training or work-related activities, for a minimum of 80 hours a month. If people don’t meet the 80-hour requirement, they can only access SNAP support for three months over a three-year period.

Removing supports like food, that help meet people’s basic needs, creates barriers to maintaining or finding employment. The Center on Budget and Policy Priorities (CBPP) found that among adults subject to work requirements, stable employment was the exception, not the norm. The vast majority of adults subject to work requirements remained poor, and many are even worse off. CBPP found that the poverty rate remained largely unchanged among program participants in nearly all of the sites they studied and that “deep poverty increased significantly in six of the eleven sites.”[5]

There are several reasons why time limits have not led to job readiness, more employment, and a better quality of life. While many adults without children work, many low-wage jobs don’t offer 80 hours a month and don’t offer sick leave, benefits or paid time off. Some adults cycle in and out of temporary or seasonal jobs.[6] People who lose hours because they are ill or caring for a sick child or elderly parent may fail to get the required 80 hours and lose food assistance. Some Ohioans have difficulty working due to barriers, such as lack of stable and affordable housing, transportation or childcare.[7]

Moreover, the job training and work-related activities available to many participants does little to address the underlying employability barriers. Counties need more resources and partner support to build high quality employment and training programs to meet people where they are, reduce employment barriers and help more people get on a career path.[8]

The Federal Food and Nutrition Service (FNS) created the SNAP to Skills initiative to address this need. This federal program reimburses training providers for 50% of the cost of services that help SNAP recipients gain skills or connect to work.

The state of Washington used 50-50 reimbursement funds to build an extensive network of employment and training for SNAP recipients. Their voluntary program serves 28,000 people a year at all state community colleges and 30 community partners. The program supports students with career-tech, basic education, GED, and ESL classes. Students in the program have better persistence, completion and employment outcomes than peers who are not.[9]

States can request that the time limit be waived in places with high unemployment. When a waiver is approved by the USDA, adults who would otherwise be subject to the three-month time limit (and lose access to SNAP after three months) are able to continue receiving SNAP benefits. The time limit was waived nationwide during the years following the Great Recession, but was reinstated in Ohio in 2014.

SNAP rules permit states to waive time limits in cities, counties, or groups of counties with: 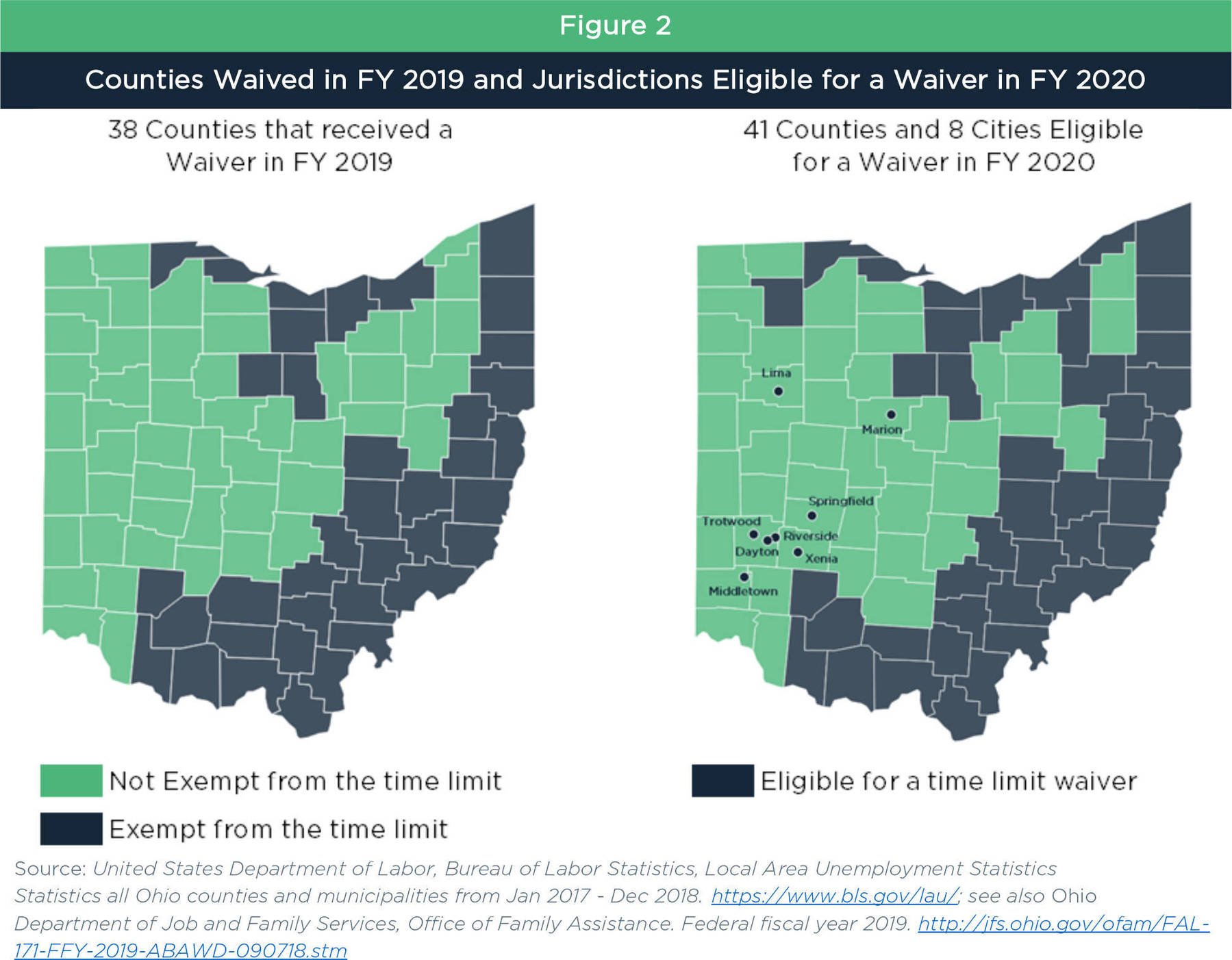 Forty-one counties and eight cities are eligible for a waiver because their unemployment rates from January 2017 through December 2018 averaged 20% higher than the national average unemployment rate. The 41 counties are listed below (counties not included in the waiver request for the current (2019) federal fiscal year, which runs from October 1, 2018 through September 30, 2019 are italicized):

During Governor Kasich’s tenure, Ohio did not request waivers for cities that were eligible. We urge the DeWine administration to reverse this trend to support Ohioans in the following eight eligible cities:

In addition to the counties and cities highlighted above, Governor DeWine could provide relief to additional places where need is high and economic opportunities are limited. Federal SNAP rules also allow states to “group” adjacent counties that share economic characteristics if the unemployment rate for the entire group of counties meets the criteria listed above. According to the CBPP, an additional 38 counties could qualify for the waiver in federal fiscal year 2020 through grouping.[11]

Who could be affected?

The time limit applies to adults without dependents and without a disability between the ages of 18 and 49.[12] According to CBPP’s analysis of national data, close to a quarter of this population is in their thirties, and nearly a third are in their forties. These people live in all parts of the state (rural, urban, and suburban areas) and 45% are female.[13]

Childless adults who participate in the SNAP program have very low incomes. According to CBPP, approximately 70% live at or below 50% of the federal poverty level. Another 17% live between 51 and 100% of the federal poverty level.[14] People who lose SNAP after three months struggle to afford the basics, such as food, rent, utilities, health care, and transportation.

On the other hand, decisions to limit federal resources for food aid have a negative economic impact. For instance, in 2014, the Kasich Administration denied waivers to 72 qualifying counties in Ohio. The rollback cost Ohio’s economy $464 million in SNAP benefits that would have gone to businesses that support jobs and local economies.[16] As a result, Vinton County and Carroll County, both rural communities, lost their only grocery stores.[17]

A brief history of the SNAP waiver in Ohio

The federal government waived time limits for the entire state of Ohio from 2007 through 2013. Ohio was eligible for a statewide waiver in 2014 and 2015, but Governor Kasich requested the waiver for only 16 counties in 2014 and 17 counties in 2015. In 2016, the Kasich administration requested a waiver in 18 counties. In 2016, the Kasich administration could have requested a waiver for 21 counties and 9 cities, but left the cities and three counties out.[18]

The chart below shows that Ohio’s overall SNAP caseload fell in 2014 as time limits were reinstated in 72 counties. Between state fiscal years 2013 and 2018, more than 422,000 Ohioans stopped getting food aid.

The counties selected for the waiver in 2014 were mostly rural, Appalachian, and white. The Legal Aid Society of Columbus joined other organizations in fling a civil complaint with the USDA asserting that the decision discriminated against Ohioans living in counties with urban centers, making it more difficult for black Ohioans and other people of color to access food and nutrition assistance. According to Cleveland.com, in June of 2014, over 62% of SNAP participants in Ohio were white. In the 16 counties that were included in the time limit waiver in 2014, over 94% of recipients were white while in the counties that were denied, a much larger share were black.[19] To date, the USDA has not acted on the civil rights complaint.

The most recently approved SNAP waiver (for federal fiscal year 2019) mitigates some of the racial inequities. Prior to the policy change, just 5% of African-American families lived in a county that was exempt from the punitive time limits. As a result of the new waiver, 41% of African-American families live in an exempt county.[20] The maps in Figure 4 highlight the counties waived between federal fiscal year 2014 and 2019 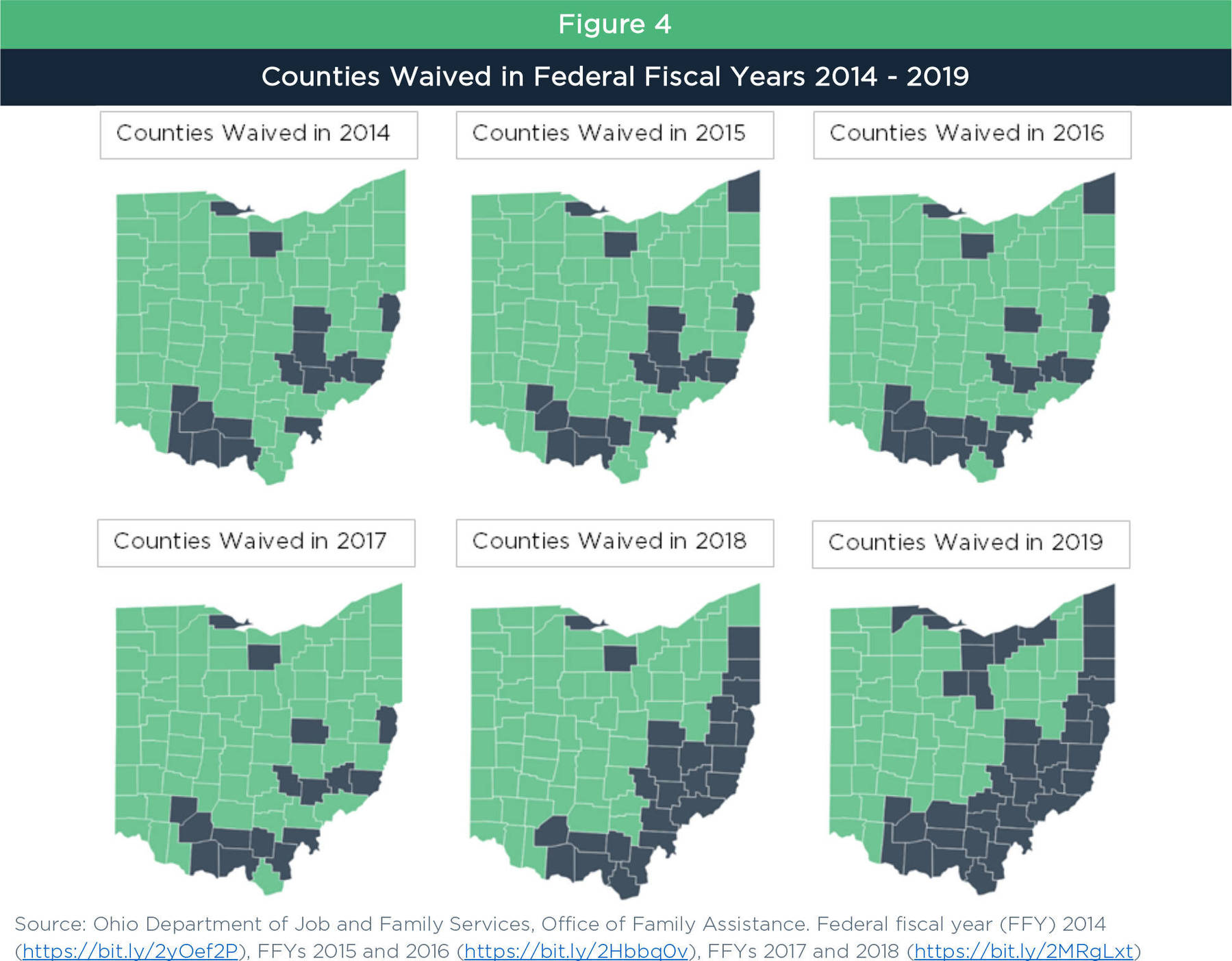 On February 12, 2019, the USDA proposed a rule change that would make it more difficult for cities and counties to receive a time limit waiver. The Center for Community Solutions found that only three counties (Adams, Meigs, and Monroe) would be eligible for a waiver of the time limit under the new rule, because it requires the unemployment rate in a jurisdiction to be at or above 7%. While these counties have the highest unemployment rates in Ohio, there are several other counties across the state that have higher poverty and food insecurity rates.[21] Policy Matters Ohio submitted comments to USDA highlighting how the proposed rule would be harmful to workers and Ohio’s economy.[22]

The DeWine administration must take advantage of time limit waivers in as many cities and counties as possible. That way, more Ohio children, adults, and families will access healthy food. This will also mean that Ohioans will spend millions of federal dollars that support local economies across the state. SNAP dollars spent in grocery stores, farmer’s markets and corner stores are dollars that will boost local economies.

We urge Governor DeWine to do the right thing and include all eligible counties and cities in Ohio’s request for a waiver of time limits on federal food aid in federal fiscal year 2020. This will enhance economic security of low-income Ohioans and help stimulate local economies.

We also ask Ohio lawmakers to improve employment and training programs for SNAP participants by investing $4 million in General Revenue Funds annually to develop local SNAP E&T partnerships between counties, training providers, workforce development agencies, nonprofits and employers with the goal of developing and strengthening training programs that include wrap-around services, such as childcare and transportation.

This work was made possible with support from:

[1] Feeding America, “What Hunger Looks like in Ohio.” https://bit.ly/2zocERk

[12] Finding of a disability may be subjective. One in three people affected by SNAP time limits in Franklin County, Ohio, reported a physical or mental limitation but were not classified as disabled, according to a survey conducted by the Ohio Association of Foodbanks. https://bit.ly/33itnU9

[13] Steven Carlson, Dorothy Rosenbaum, and Brynne Keith-Jennings, "Who Are the Low-Income Childless Adults Facing the Loss of SNAP in 2016?" CBPP. https://bit.ly/2MYU9ej

By Will Petrik (he/him)