As Ohioans work to rebuild our economy in the face of the COVID-19 pandemic, policy makers should make an investment in the state earned income tax credit (EITC), a proven strategy, to help Ohio families recover. The Ohio EITC is based on the federal EITC, which is the nation’s most powerful anti-poverty program that benefits both families and communities. In 2016, the federal credit lifted 265,000 Ohioans out of poverty.[1] Last year, 895,000 Ohioans claimed $2.2 billion in federal EITCs.[2] The credit only goes to families with at least one worker that has earned income. The credit rewards work, reduces tax liability, helps financially vulnerable families, and boosts local economies.[3] Children from families that receive refundable EITCs have higher birth weights, better test scores, are more likely to attend college and earn more as adult workers.[4]

This map includes embedded data. Mouse over a district to see the federal EITC's impact there.

This map includes embedded data. Mouse over a district to see the federal EITC's impact there.

The Ohio EITC was implemented in 2013 and has been expanded twice. Unfortunately, because it remains nonrefundable, it does little to help Ohio’s poorest workers. The latest expansion in the 2019-2020 Transportation Budget increased the credit from 10% to 30% of the federal EITC. The change helps some middle-income families, but it only benefits an additional 1% of workers with annual incomes $22,000 and less.[6]

When a family’s credit exceeds their federal income tax liability, they receive the difference in a refund. Refundable EITCs boost the incomes of low-wage workers and helps them make ends meet. There are 29 states including Puerto Rico and the District of Columbia with state EITCS and only 6 are nonrefundable. 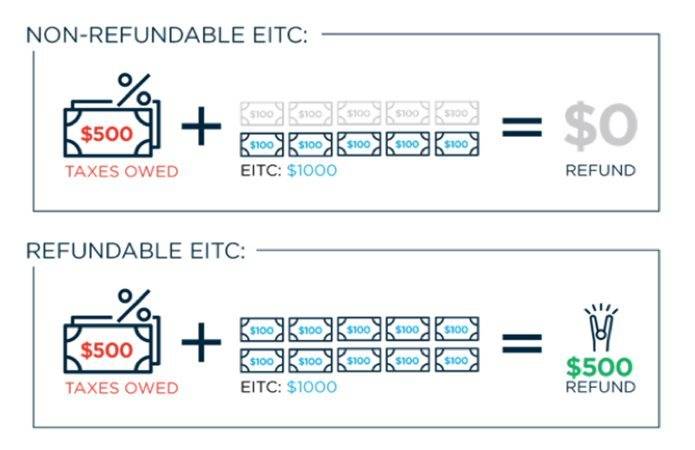 A winning policy to help Ohioans in low-wage jobs

Ohio’s lawmakers should add a new option to the state EITC, allowing families to claim either the current state EITC, which is 30% of the federal, or a new option, set at 10% of the federal EITC, but fully refundable. Adding a 10% refundable option to the current EITC would ensure the credit reaches the state’s poorest workers. Allowing tax filers to select the option that works best for them ensures the credit helps more Ohioans. Analysis from the Institute for Taxation and Economic Policy shows that this policy would help 756,800 Ohio families at a cost of $207.6 million. The average credit for families earning no more than $22,000 a year would be $230. For families earning between $22,000 - $40,000 the average credit would be $324.[7]

As Ohioans work to rebuild their families, communities, and economy in the face of the COVID-19 pandemic, policy makers should a create a state refundable EITC tier to help Ohio families recover.

[2] Internal Revenue Service, Statistics for Tax Returns with EITC as of December 2020, at https://bit.ly/39SvrGt.

[3] Caines, Roxy, 5 Ways the EITC Benefits Families, Communities, and the Country, Center on Budget and Policy Priorities, January 17, 2017 at https://bit.ly/3izpMsI

[5] Data provided by the Center on Budget and Policy Priorities in an e-mail of December 18, 2020 based on Internal Revenue Service data on 2018 tax filers by zip code and Missouri Census Data Center geographic crosswalks.

[7] Data provided by the Institute on Taxation and Economic Policy, from Aidan Davis to Wendy Patton, September 29, 2020