Good morning, Chairman Merrin, Vice Chairman Manning, Ranking Member Boyd and members of the committee. My name is Victoria Jackson and I am a researcher with Policy Matters Ohio, a nonprofit, nonpartisan organization with the mission of creating a more vibrant, equitable, sustainable and inclusive Ohio. Thank you for the opportunity to submit testimony. I am writing to oppose House Bill 200 (H.B. 200), which would harm under- and unemployed Ohioans and children living with a single parent.

SNAP is the nation’s largest and most effective anti-hunger program. With 13.7 percent of households experiencing food insecurity, Ohio ranks 40thamong the states and District of Columbia.[1] Federal food aid keeps over 1.3 million Ohioans in over 700,000 households fed.[2] Two-thirds of recipients are people we do not expect to work: 42 percent are children, 11 percent are elderly and 13 percent are adults with disabilities (see figure 1).[3] Able-bodied adults comprise 34 percent. Of those, many are taking care of minor children or people with disabilities. The vast majority of able-bodied adults without dependents who receive SNAP work. 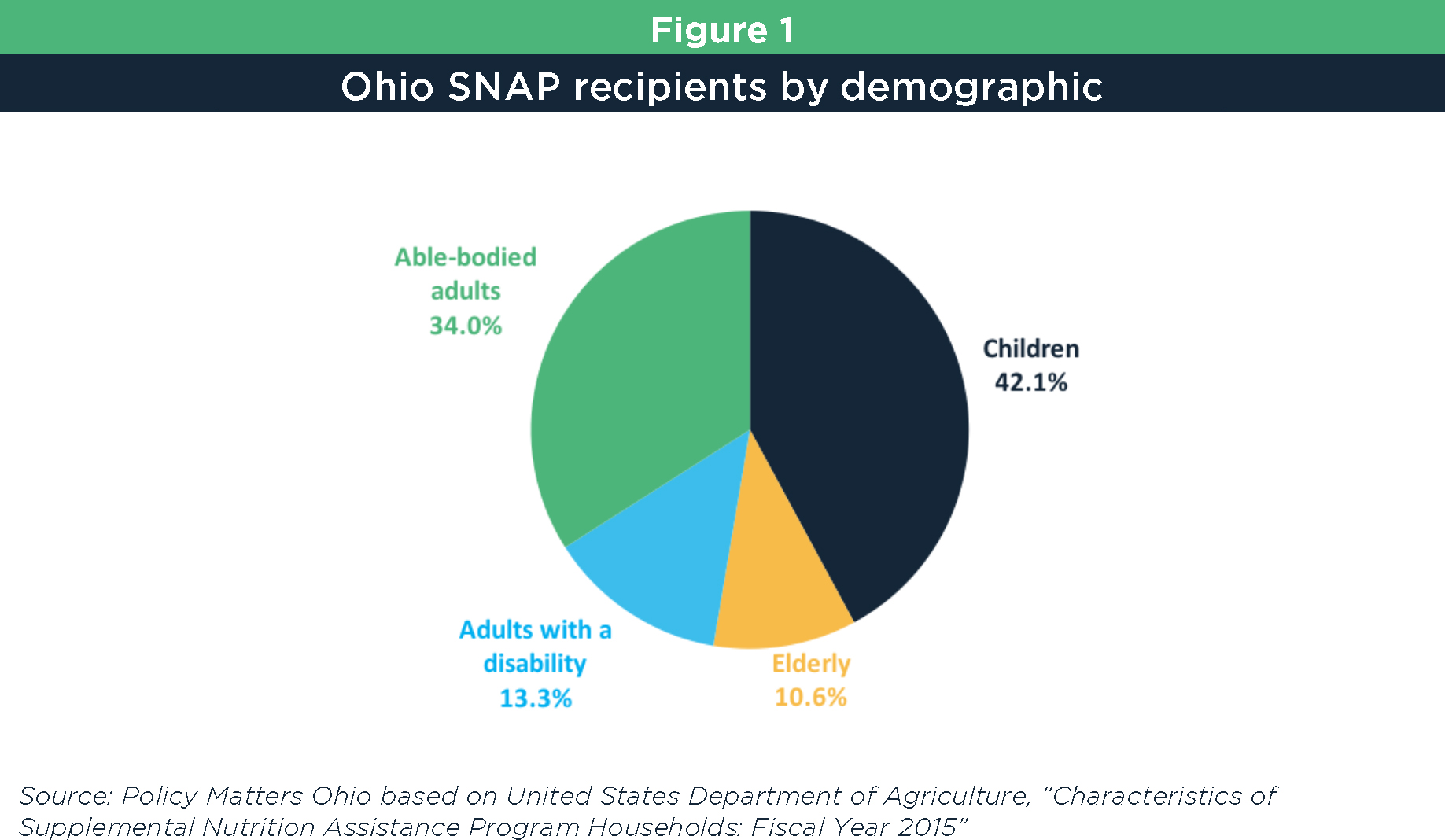 To qualify for SNAP a family must live at or below 130 percent of the federal poverty line, $27,024 for a family of three.[4] Food assistance allows low-income families to buy a modest diet of nutritious food. On average, SNAP provides about $1.40 per meal and recipients have diets similar to other low-income people.[5] SNAP helps struggling families and workers put healthy food on their tables and is the front line against hunger. According to a Feeding America analysis, SNAP provides 12 meals for every one meal that Feeding America’s network of food bank provides. Private charities cannot compensate for proposed cuts. Instead, more people in our community would go hungry.[6]

Children are the largest group helped by SNAP and the benefits to their health and well-being extend beyond childhood. Food-insecure children whose families received SNAP have greater high school completion and lower rates of obesity, heart disease and stunted growth than food-insecure children whose families did not.[7] Medical costs for low-income adult SNAP participants are about 25 percent less per year than low-income adult non-SNAP participants. The difference is even greater for those with hypertension and coronary heart disease.[8] SNAP kept 419,000 people in Ohio out of poverty, including 187,000 children.

The proposals in H.B. 200 would hurt Ohioans struggling to find work in a challenging labor market. Current federal SNAP law limits benefits to three months out of a 36-month period for childless, non-elderly, able-bodied adults who work less than 20 hours per week. The law allows states to waive these limits for people in a city or area with high unemployment. Four kinds of communities now qualify for the waiver: Those categorized as “labor surplus areas” by the U.S. Department of Labor; those with an unemployment rate 20 percent higher than the nation’s over a recent 24-month period; those with a recent unemployment rate above 10 percent; or those qualifying for extended unemployment benefits.[9] For the period between October 2018 and September 2019, Ohio has waived 38 counties that have had unemployment rates 20 percent higher than the national unemployment rate. In the current waiver period, Ohio waived 12 additional counties because the state’s job market worsened relative the nation. For 2018-2019, Ohio had 43 designated labor surplus areas.[10]

Ohioans who work full-time still struggle to afford to put food on the table. Last year, six of Ohio’s 10 most common jobs paid so little that a typical full-time worker would earn less than $26,000 and need food assistance to feed a family of three.

This year, more than 1,600 Ohioans lost their jobs when General Motors closed the Lordstown plant, which produced the Chevy Cruze. Three Lordstown suppliers, employing 750 people, have announced mass layoffs as a result.[11] The plant is in Trumbull County, which receives a waiver. Surrounding counties, where former employees may live, are also waived: Carroll, Columbiana, Cuyahoga, Jefferson, Mahoning, and Ashtabula.[12] Former Lordstown employees without minor children can put food on the table even if they cannot find work in three months, because they are waived from this harsh time limit. Trumbull County’s current unemployment rate is not high enough (yet) to meet the 7 percent threshold in the proposed rule.[13] If H.B. 200 passed, these former Lordstown employees who struggle to find work would be barred from receiving food aid.

The bill proposes enforcing the harshest asset limits allowable. This would harm workers who managed to save for the future. Laid off workers should not have to deplete their savings before they can use SNAP to help feed their family.

Ohio’s unemployment rate has been consistently higher than the U.S. as a whole.

Ohio’s economy could be harmed if waivers are restricted

Eliminating Ohio’s ability to request time-limit waivers would harm communities that have high unemployment. Waivers boost the economy in struggling areas because unemployed workers who participate in SNAP can continue to shop at local grocery stores. In 2016, 9,644 retailers redeemed over $2.4 billion in SNAP benefits.[20] In 2013, the Kasich Administration denied waivers to 72 qualifying counties in Ohio.[21] The rollback cost Ohio’s economy $464 million in SNAP benefits that would have gone to businesses that support jobs and local economies.[22] As a result, Vinton County, a poor rural community, lost its only grocery store. Vinton was not the only rural county to experience this loss.[23] In a weak economy, economists estimate that $1 of SNAP benefits spent in a local store expands the economy by $1.70. SNAP retailers, the businesses accepting SNAP benefits, are numerous and benefit from business from SNAP recipients.[24]

The phrase “able-bodied” is not informative

Able-bodied adults without dependents sounds descriptive but is not. Many people so labeled have mental and physical disabilities, have children who are not in their custody, or are taking care of elderly or disabled family members. A study of participants in Ohio Association of Foodbanks’ Work Experience Program in Franklin County found 30.8 percent of clients reported having a physical or mental health limitation despite being categorized as “able-bodied.” Despite being labeled as “without dependents,” 24.4 percent of clients reported having children not in their custody and 13 percent are caregivers for a parent, relative, or friend. These adults also face other obstacles that make it difficult for them to find work and stay employed. For instance, 30 percent of the clients surveyed in the study had no high school diploma or GED.[25] Despite these challenges most adults in this category were working.

Eliminating categorical eligibility will create additional barriers for low-income families that rely on food aid. Children who receive food assistance are categorically eligible for free and reduced school lunch. Eliminating categorical eligibility could make it harder for hungry children to qualify for free and reduced lunch resulting in thousands of children losing access to the program. When children lack adequate nutrition, both their health and education suffer.

The bill would require custodial and non-custodial parents to cooperate with Child Support Enforcement (CSE) in order to receive SNAP benefits. Under this proposal, custodial parents would be required to open a case for child support with CSE. There are several reasons why a custodial parent may not seek formal child support order: They have an informal arrangement, the non-custodial parent is unable to pay, or they have a reason for not wanting to engage with the custodial parent. The CSE requirement could have several harmful consequences. In states with the policy, parents were sanctioned by having their portion of food aid cut if they did not cooperate with CSE. The goal of the policy is to take food away from low-income parents and children by reducing their overall food budget. If both parents work with CSE, there is no evidence that this proposal would increase child support payments without increasing a child’s risk of hunger. According to census estimates, 72 percent of custodial families with incomes below 200 percent of the federal poverty level access CSE services. Increased cooperation with CSE does not mean children will have access to more resources. Additionally, low-income non-custodial parents often struggle financially: Noncustodial parents with incomes of $10,000 a year or less hold an estimated 70 percent of child support debt.[28]

SNAP is a critical and effective nutrition program. All Ohioans are better off when all Ohioans are fed and healthy. Most SNAP recipients who can work, do. The program is a proven tool to help people stay on their feet and make positive contributions to their employers, communities and the broader economy. At least a quarter of households with childless adults include members who are working while receiving SNAP, and about 75 percent work in the year before or after receiving SNAP.[29] Many recipients cycle through periods of work and unemployment, while others have multiple odd jobs to afford daily necessities but still do not work enough hours to meet program requirements. Maintaining Ohio’s ability to use time-limit waivers is an important tool to help under-and unemployed workers. Waivers also help local businesses by allowing people to continue buying groceries after a job loss or having their hours cut. Waivers are critically important during an economic downturn or a large job loss. In addition to helping people put food on the table, SNAP boosts the economy.

[25] “A Comprehensive Assessment of Able-Bodied Adults without Dependents and Their Participation in the Work Experience Program in Franklin County, Ohio.” Ohio Association of Food Banks, 2015. https://bit.ly/2EyAhqK