More than 300,000 Ohioans could lose their unemployment compensation benefits the day after Christmas if Congress does not act to maintain them, according to new analysis from Policy Matters Ohio.

“No one should have to spend the holidays worried about keeping a roof over their heads,” said Policy Matters Research Director Zach Schiller. “But a grim holiday season awaits hundreds of thousands of Ohioans unless Congress extends unemployment benefits beyond Dec. 26. Legislation earlier this year created several new programs to cushion the effects of the pandemic recession, programs that were extraordinarily effective in doing just that. However, now Congress must act to continue them, as well as reinstating the $600 a week supplement that expired in July.”

Among the programs that will expire are those that:

Altogether, according to data released yesterday by the Ohio Department of Job & Family Services, a total of 346,219 Ohioans were claiming benefits under one of these three programs in the week ended Nov. 28. 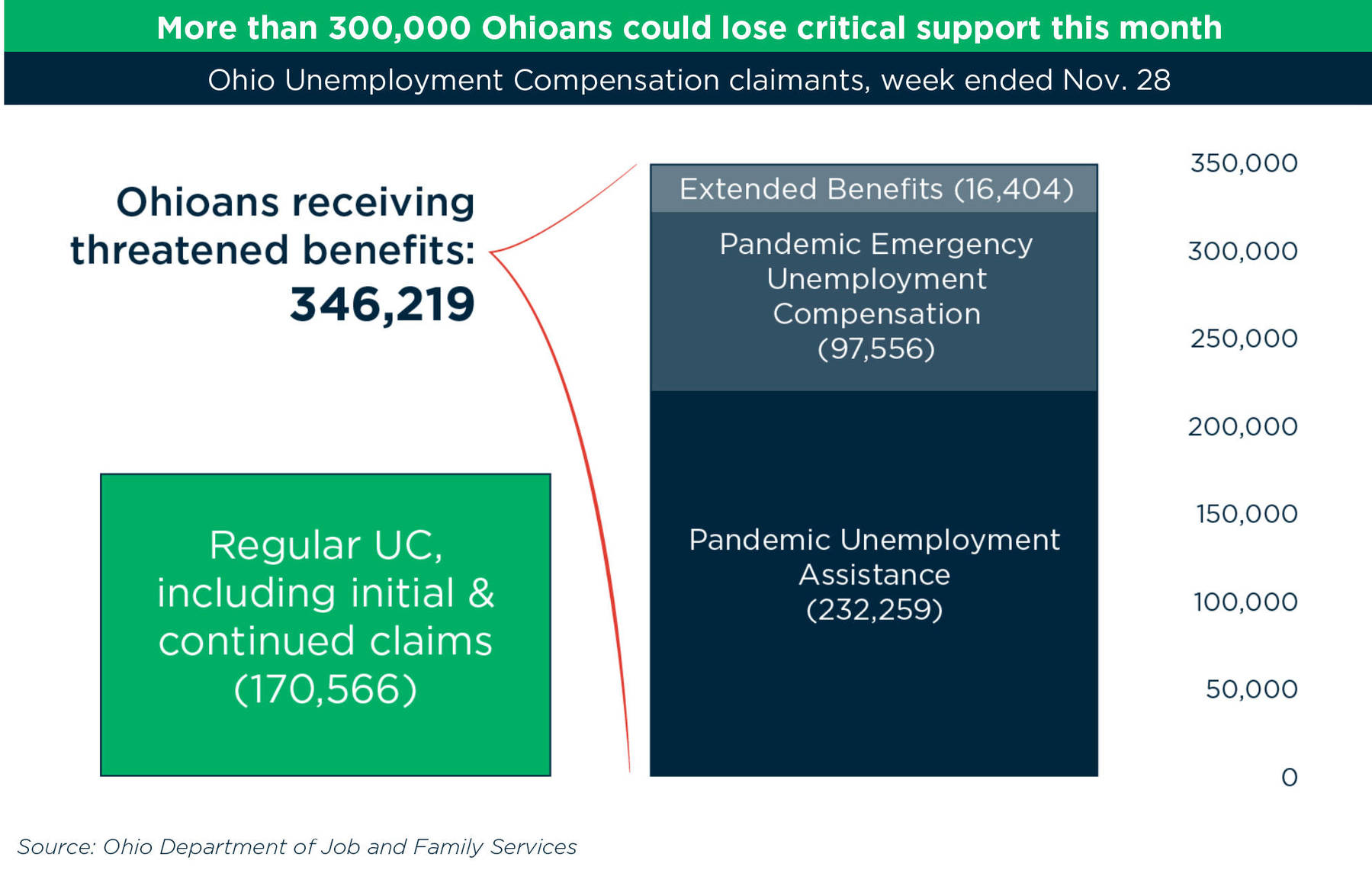 “Some of those receiving these benefits now will exhaust them. Others will be cut off from PUA and EB benefits on Dec. 12 because of how eligibility in those programs is defined and a decline in the reported unemployment rate,” Schiller said. “Some unemployed Ohioans will find jobs before Dec. 26, while others will file new claims, so the figures above don’t say exactly how many will be cut off. However, there is no phase-out; even those who would have been eligible for more weeks of benefits will be cut off Dec. 26. That’s some present the day after Christmas.

“Unemployment compensation is a crucial support. People who go for long periods without finding work of course experience financial stress, may default on their obligations or even declare bankruptcy. But research also has shown health effects, ranging from delaying needed medical care to higher suicide rates.”

Due to hiring discrimination, segregation and other long-time structural barriers to stable jobs, Black people are more likely to be unemployed. Since last summer, Black people have often accounted for more than a fifth of the initial claims for UC benefits in Ohio, far more than their share of the workforce.

“When the government steps in to provide support because unemployment is high and jobs are hard to find, it doesn’t just help the people who receive it and their families; it helps all of us,” Schiller said. “That’s because those families who lose benefits will have to restrict their spending.”

One example: Noting in October that Ohio banks were doing pretty well in staying on top of their financial obligations, Mike Adelman, president of the Ohio Bankers League, told Crain’s Cleveland Business: “We realize a big part of that is the stimulus money, the additional unemployment funds that came through the federal government.” Numerous observers have credited additional unemployment benefits and the $600 weekly supplement in particular for boosting the economy.

Increasingly, as the pandemic recession drags on, more jobless workers have been unemployed for a longer time. Nationally, 36.9% of the unemployed have been out of a job for at least 26 weeks. This makes it all the more important that Congress extend benefits beyond the usual amount, as it has done over four decades. In every recession since the 1980s, extended benefits were available to workers for at least three years, versus the nine months authorized so far. Moreover, in each instance when such benefits ended, the share of U.S. workers receiving UC benefits was much lower than it is now.

Ohio’s unemployment rate for October dropped to 5.6%, but Ohio’s labor market remains weak, as evidenced by the half million workers receiving some form of unemployment compensation and the slowing gains reported in today’s U.S. jobs report. The 27,750 initial claims for benefits filed in the most recent week were nearly three times the level of a year ago.

“Congress needs to act now to ensure hundreds of thousands of Ohio families — and the Ohio economy — get the protection they need,” Schiller said.