Foreclosures continue to decline, but remain elevated; Ohio can do more to prevent them.

In 2015, there were 40,479 new foreclosure filings in Ohio, amounting to one foreclosure filing for every 127 housing units. The number is less than half peak levels seen in 2009, and 7 percent lower than in 2014. However, the number remains 2.5 times higher than levels prior to the onset of sub-prime lending in the mid-1990s.

Foreclosures in large counties declined faster than the statewide average but remain a substantial portion. More than half of 2015 foreclosure filings were in the state’s 10 largest counties (60 percent), but the number of foreclosure filings in these counties fell at a faster rate (9 percent lower than in 2014, compared with a 7 percent decline statewide). Filings in Franklin County declined 30 percent, Lucas 18 percent, and Stark 12 percent, compared to a 9.4 percent drop statewide. Filings increased in Summit and Mahoning counties.

Foreclosure density, by county, demonstrates community impact. For every 1,000 people in Ohio there were more than three foreclosure filings in 2015. The foreclosure density in Richland County was more than double the statewide level, with nearly eight foreclosures per 1,000 residents, giving it the top spot for a second straight year in a row. Eight counties from last year’s top 10 list remained. Jackson and Montgomery counties rejoined the list, replacing Franklin and Brown.

Addressing 20 years of foreclosures. Foreclosures began increasing 20 years ago, following the onset of sub-prime lending. After two decades of elevated foreclosures, now beginning to stabilize, it is time to assess the damage left in the wake of the crisis. The task is too big for this report, but we outline further steps the state can take to ameliorate negative impacts on families, neighborhoods, and local government. Since 1996, there have been more than 1 million foreclosure filings in Ohio. Not all filings result in foreclosure, but the sheer volume of filings provide insight into the severity of the problem in Ohio. To reduce foreclosure rates, ameliorate economic distress, and address blight, the state of Ohio should: 1) boost state funding levels for housing counseling and help fund legal aid; 2) restore the Local Government fund and increase state and local funding for affordable, quality housing; and, 3) provide flexible state support for local efforts to address neighborhood blight.

There were 40,479 new foreclosure case filings across Ohio in 2015, according to data collected by the Supreme Court of Ohio.[1] This equates to one foreclosure filing for every 127 housing units in the state.[2] It is 3,248 fewer filings than the 43,727 filings seen in 2014, and less than half 2009 record levels, when there were 89,000 foreclosure filings. That said, the number of annual foreclosures remains well above levels seen in the 1990s, prior to rapid growth of subprime lending and the onset of the housing crisis. Figure 1 below shows that while current foreclosure rates are down significantly from the high, they remain 2.5 times above the 1995 level, when 15,975 foreclosure cases were filed. The number of new foreclosure filings fell in 59 of the 88 Ohio counties last year, but remains at least double the 1995 rate in 73 counties.[3] 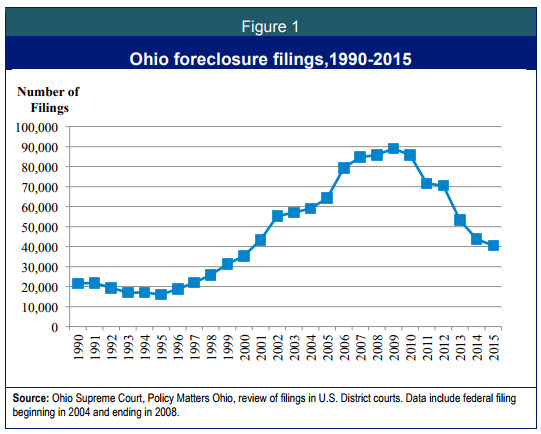 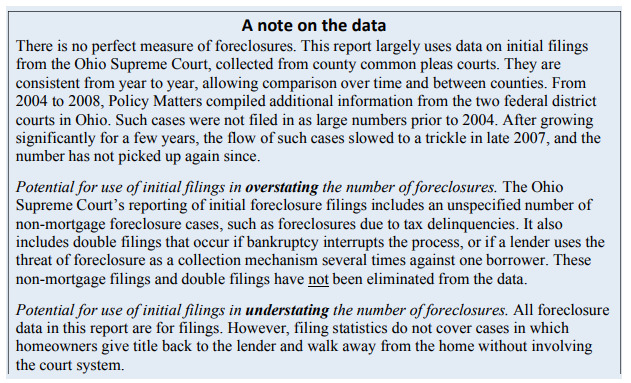 Franklin County saw the largest drop in new filings from last year (30 percent), followed by Lucas, Stark and Cuyahoga. All four counties showed larger decline rates than the state as a whole. Rates in Hamilton, Butler and Montgomery also declined, but at slower speeds. 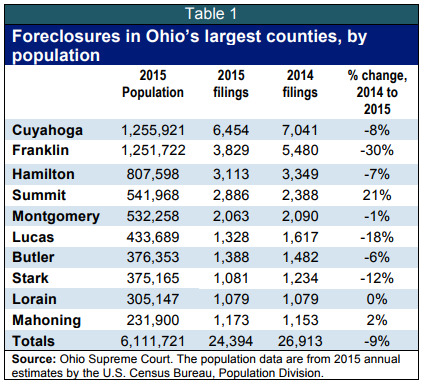 Eight counties from last year’s top ten list remained on the list. Three of those counties had an increase in their filing rates: Coshocton, Summit and Trumbull. Summit County presented the most noticeable increase, 21 percent, with more than five foreclosure filings per 1,000 county residents.

Four of the eight counties - Cuyahoga, Mahoning, Erie and Ashtabula - showed declines in 2015. In Cuyahoga County, the number of filings for every 1,000 people decreased 8 percent to 5.14 per 1,000 people, the lowest level in more than a decade.

Montgomery and Jackson counties are new to the top 10 list this year, replacing Franklin and Brown counties, where filing rates fell by more than 27 percent. 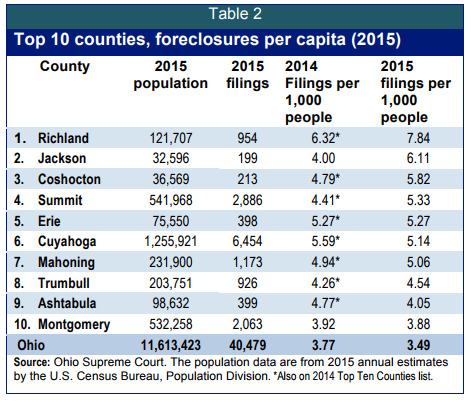 Twenty years of foreclosures hurt families and communities across Ohio 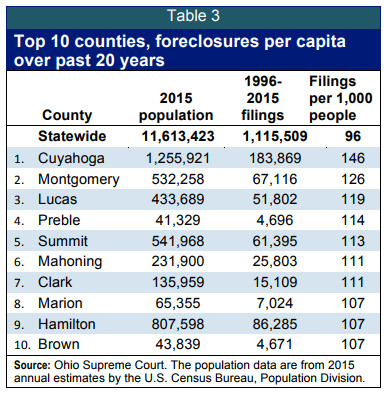 Foreclosure is a first step on the path to economic insecurity.

As a result of the housing crisis, a greater number of families are finding themselves in economic hardship. Losing a home leads to a decline in financial stability, credit scores and household net worth, while increasing the likelihood of filing for bankruptcy.[4] Homeless shelters have seen an increase in people served. Food assistance caseloads increased.[5] The intense stress of losing a home can even bring about ill health, domestic violence, suicide and increased calls to crisis hotlines.

The community and surrounding neighbors suffer as well.

Table 4 shows Ohio counties that have appeared on our top 10 list over the years for having a high number of foreclosure filings per capita.

These communities may be more likely to face the fiscal distress noted above.

While Richland County has only been among the top ten since 2013, Cuyahoga has made the list every year since we started compiling this data in 2004 (12 years). Montgomery County has been on 10 of 12 top 10 lists, Lucas nine, Brown eight, Summit and Preble seven. Mahoning and Highland made half of the 12 top 10 lists (6). 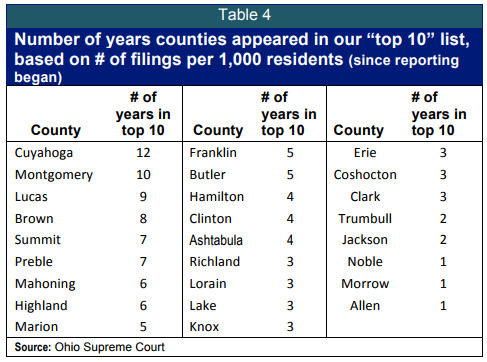 Foreclosures represent a major blow against families’ biggest source of savings and financial stability. Foreclosed homes too often become vacant and abandoned, sapping vitality from communities. Once vacant they don't bring in property taxes, meaning communities have far fewer resources to deal with struggling families and troubled properties left behind. All of this creates a downward spiral. Much important work already has been done to cope with a decade and a half of elevated foreclosures. Here, we recommend additional steps to reduce Ohio’s foreclosure rates and battle the blight and economic distress foreclosures cause.

Boost state investment in housing counseling. Foreclosure usually happens when people can’t make their house payments and can’t sell their home because it is no longer worth the amount owed on their mortgage. The Ohio Housing Finance Agency estimates more than 10 percent of Ohio homeowners are in this position, dubbed “under water.”[9] Housing counselors guide homeowners through the complex loan restructuring process to avoid foreclosure. Housing counseling programs, such as the federally funded NeighborWorks program, are not everywhere in Ohio. Existing housing counseling infrastructure should be strengthened and expanded.

Restore local government funding. Local governments are currently working with $1 billion less in 2017 than they had in 2010 (when adjusted for inflation) due to cuts in state aid and elimination of local tax sources. To enable communities to address increased needs and restore the physical blight created in the past two decades, the state should:

Dramatically increase state and local resources for quality, affordable housing. In 1991, Ohio voters approved a constitutional amendment designating housing as a public purpose. The Ohio Housing Trust Fund was established as the primary way to invest in needs for affordable housing and assist homeless people. The fund has been supported since 2003 by a fee that mirrors the county recordation fee. Unfortunately, the size of the fund continues to decline - from $53 million in fiscal year 2013 to $42 million in the current 2017 fiscal year - at a time when far more resources are needed, not less.

In some communities, the Ohio Housing Trust Fund is matched and leveraged by a local housing trust fund. In Franklin County, a local Affordable Housing Trust leverages private and public resources for investments in rental housing, supportive housing and home ownership. The Affordable Housing Trust uses financing tools to raise market values, stimulate private development, and contribute to revitalization on a neighborhood level. These local trust funds should be replicated in other communities to supplement and leverage the Ohio Housing Trust Fund. The state of Ohio should play a key role in helping make that happen.

Provide flexible state support for local efforts to address neighborhood blight. Federal dollars from the U.S. Treasury’s Hardest Hit fund are used to stabilize property values by removing and greening vacant and blighted properties to help prevent future foreclosures. Additional state investment could enable existing land banks and housing development entities to expand on the good work being done to restore neighborhoods. Additional resources, flexible in nature, could be used not only for targeted demolition but also housing rehabilitation, depending on which is more appropriate for a property and a neighborhood. In less viable neighborhoods, where few remaining homeowners feel stuck amongst dense clusters of abandoned properties, relocation assistance may be a useful tool in a creative community toolbox.

Ohio has great neighborhoods, beautiful houses, and dedicated community groups working to ensure that our residents have safe, affordable places to live. Two decades of elevated foreclosures have taken their toll on our families and communities. As the crisis begins to ease, now is the time for assertive policy to restore our neighborhoods so that the next generation can build wealth and thrive with the stability that safe housing provides

[3] There were 24 counties with increases in foreclosure filings. Among those counties where the number of filings remained unchanged are: Harrison, Hocking, Huron, Lorain and Morgan.

[4] Kingsley, Smith & Price, The Urban Institute, The Impacts of Foreclosures on Families and Communities (2009)