Having a safe place to live is a fundamental need for all people. Insecure housing can lead to job loss, poor school performance, health problems,[1] shorter life expectancy and other problems.[2] Not only do houses provide shelter, they are often a long-term investment and source of financial security. When families lose homes to foreclosure, their lives are dramatically disrupted. When it happens in large numbers across a community, foreclosure has devastating effects on the entire economy.

Ohio is well acquainted with how damaging foreclosures can be. The Buckeye State was considered ground zero in the foreclosure crisis that began in the early 2000s and reached its apex in 2009. Today far fewer Ohioans are losing their homes to foreclosure. Nevertheless, Ohio remains among the 10 states with the highest foreclosure rates.[3] 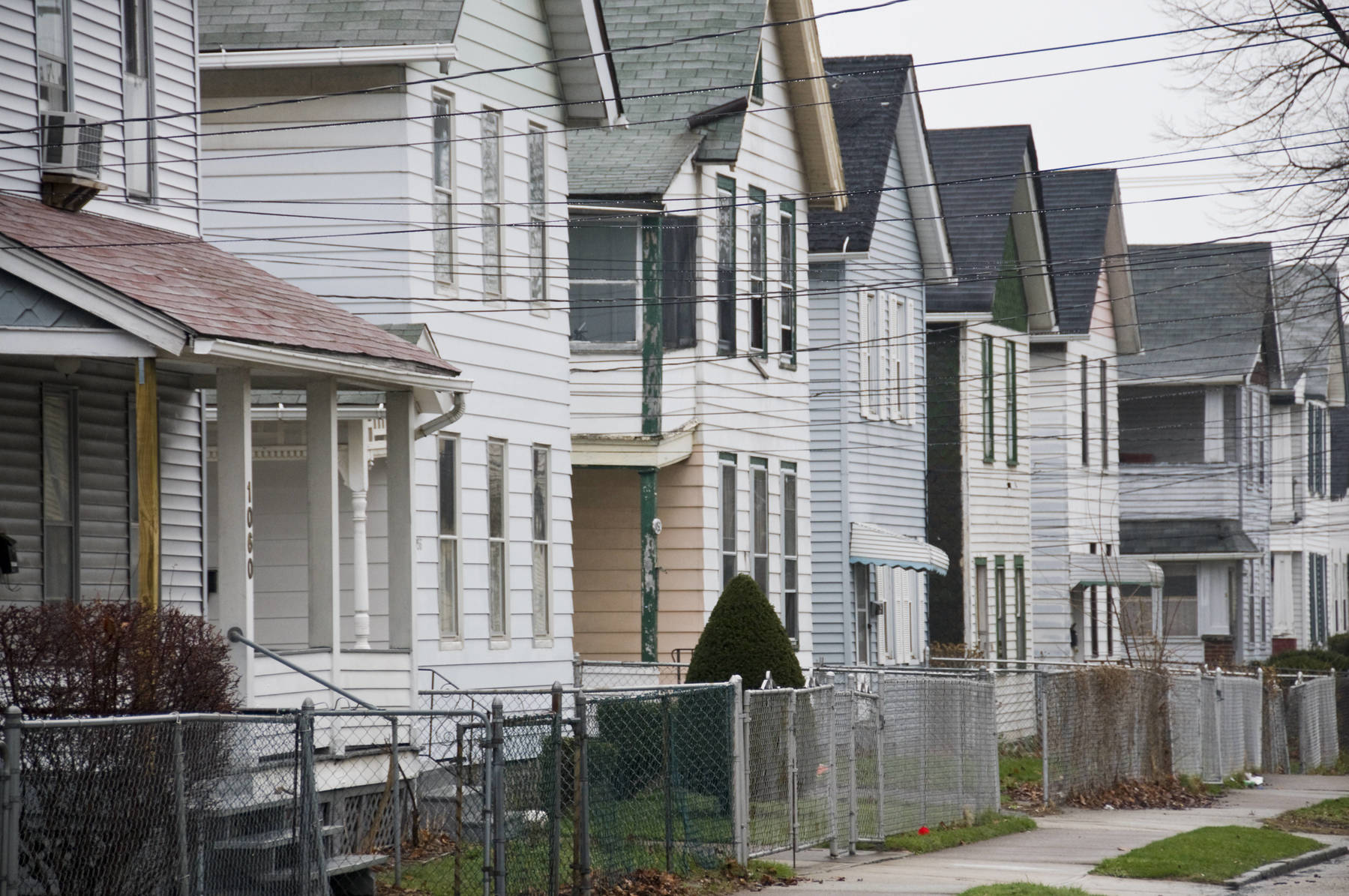 Trending in the right direction

A total of 33,527 foreclosure cases were filed in Ohio county courts in 2018, according to data from the Ohio Supreme Court.[4] That amounted to approximately one filing for every 156 housing units in the state. Though this continues the downward trend in total filings since 2009 and is 4.6 percent lower (1,642) than the total for 2017, 2018’s rate still remains close to double rates in in the mid-1990s. Additionally, 28 Ohio counties experienced an increase in foreclosure filing rates from 2017 to 2018. 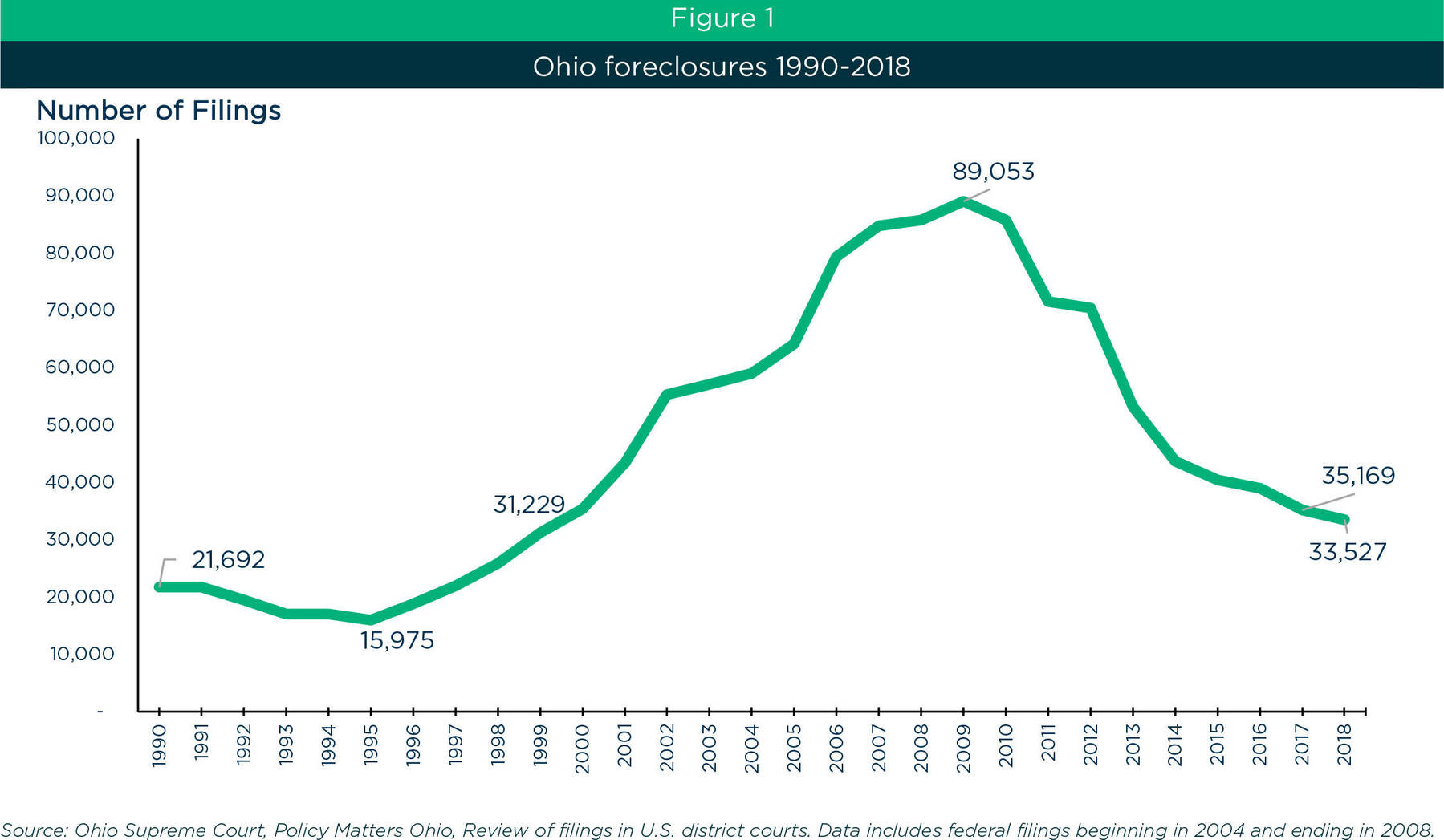 10 most populous counties have more than 50% of foreclosure filings 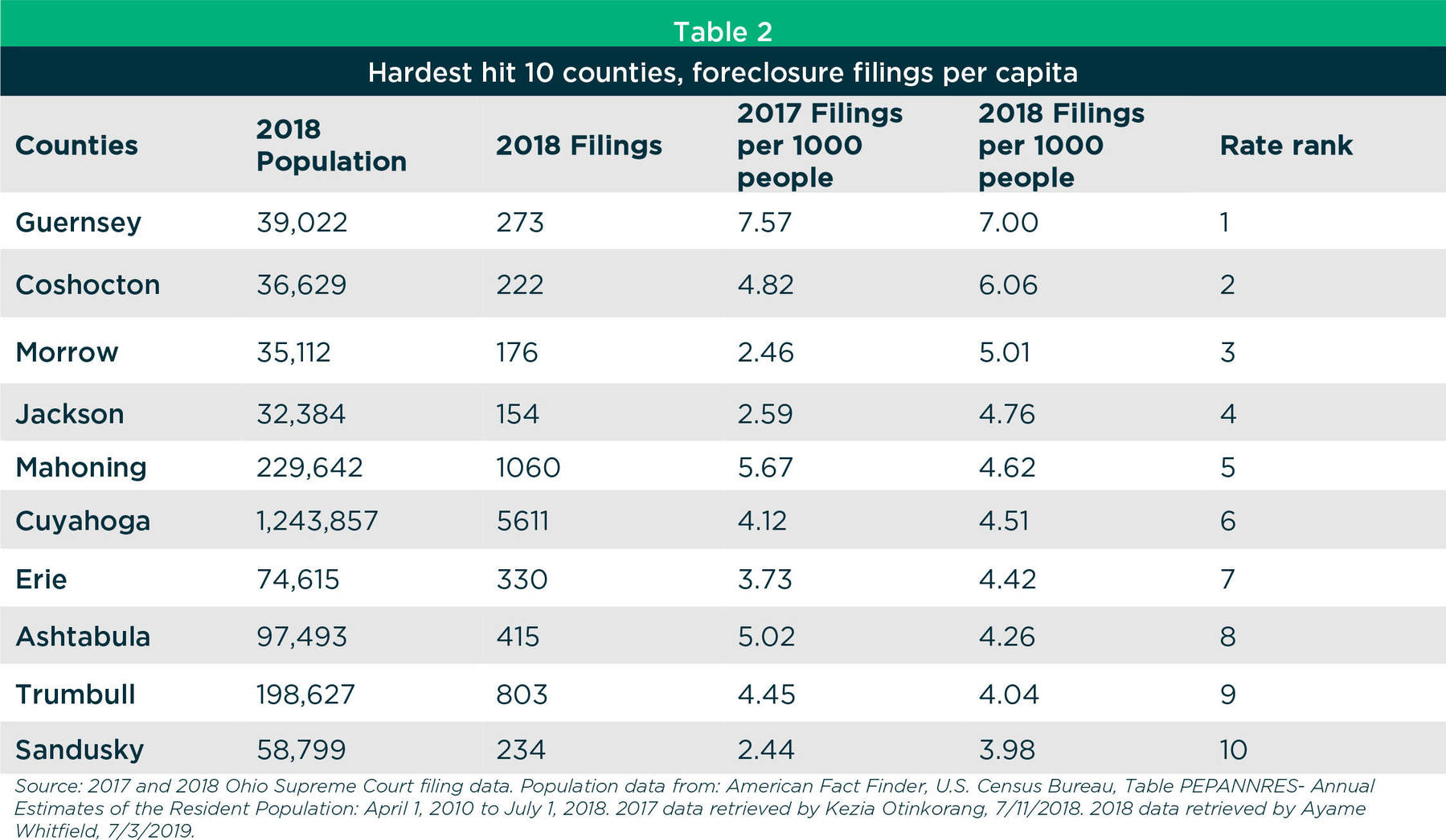 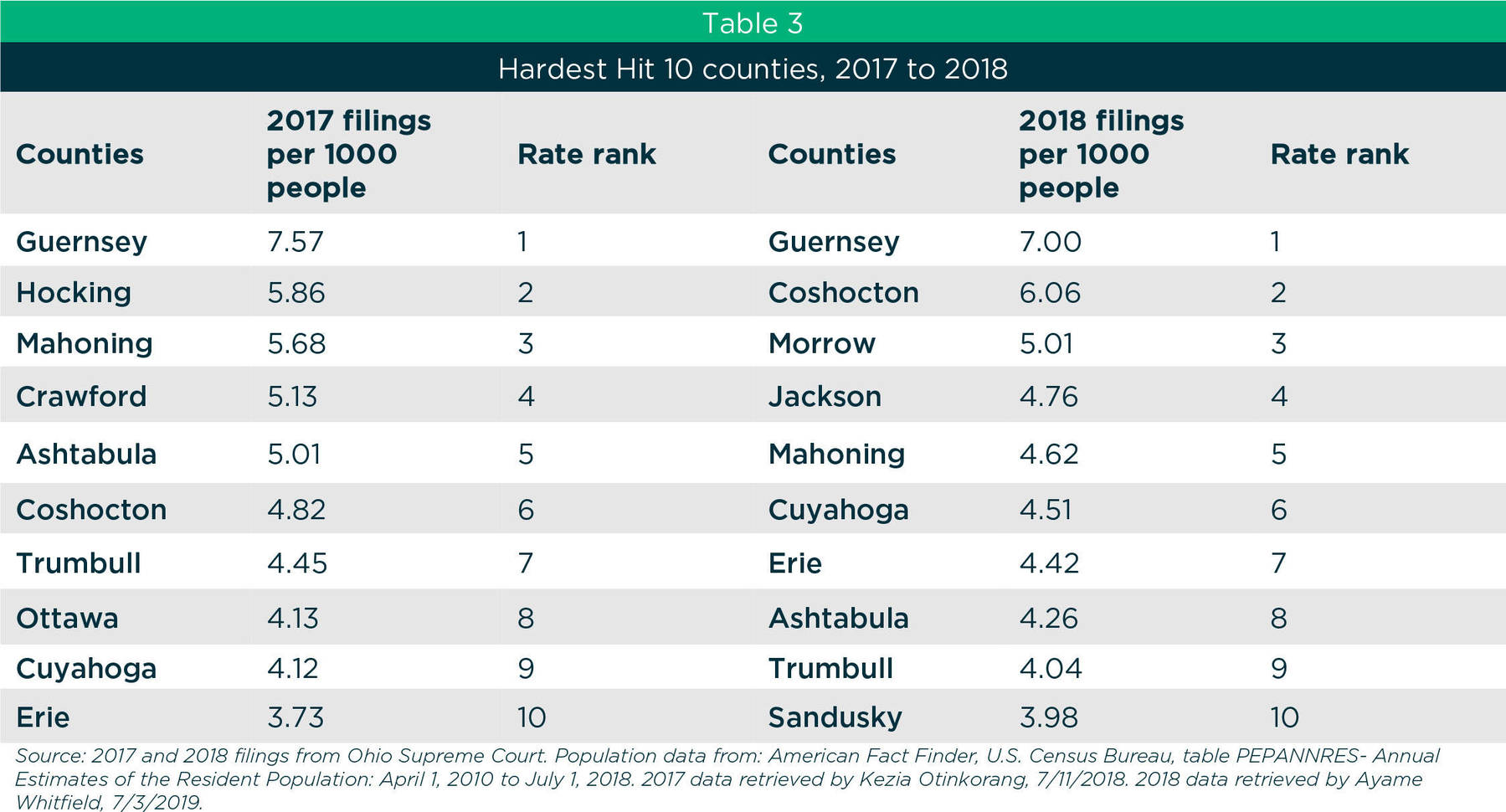 Predatory lending targeted the black community in Ohio and nationally and still does. Black millennials nationwide are now less likely to own a home than their grandparents were at the same age and the homeownership gap between black and white Americans is now higher than it has been at any point since the New Deal.[7] Land contracts, a Jim Crow-era product that often strips people of their wealth, are re-emerging in Ohio.[8] If we want secure, affordable housing for every Ohioan, we need to regulate predatory products and provide funding for housing that is too often out-of-reach in our low-wage economy.

Appendices 1 and 2, below the conclusion, show foreclosure filing rates and trends in all 88 counties.

Though foreclosures are down compared to recent years, they are still a problem in Ohio. Ohio remains among the 10 worst states in the country in foreclosure rates and rates remain between one and a half and two times as high as they were in the early and mid 1990s.

We need strong policies to promote affordable housing and support homeowners. One route that the legislature has gotten behind is investment in the Ohio Housing Trust Fund, which directly helps low-income homeowners by improving conditions, expanding services, and making housing opportunities affordable. Ohio’s legislature added between $2.5 and $3.5 million to the Housing Trust Fund in the just-passed budget and should continue to grow this fund in future years.

Ohioans need affordable, secure housing if they are to work, be healthy, and thrive. Better funding and regulation can ensure that this essential is more readily available to all of our neighbors.

[4] Data received from the Ohio Supreme Court, May 29, 2019. Numbers include both tax and mortgage foreclosures, but not tax foreclosure filings at county boards of revision for vacant abandoned properties.

[5] A recent report published by the Western Reserve Land Conservancy shows that mortgage foreclosures in Cuyahoga County have returned to 1995 levels, but the overall increase is driven by tax foreclosures. http://bit.ly/2OD9dAL

[6] Note that Warren County replaced Lake County as the tenth most populous county between 2017 and 2018.