Good afternoon, Chairman Eklund, Ranking Member Williams and the members of the committee. My name isKalithaWilliams and I am the policy liaison for asset building at Policy Matters Ohio, a nonprofit, nonpartisan organization with the mission of creating a more prosperous, equitable, sustainable and inclusive Ohio. My work centers on household financial stability and consumer protection issues in Ohio. I also convene Ohio CASH a statewide coalition of organizations focused on improving the financial and economic conditions forlow-and moderate-incomefamilies and communities in the state. Ohio CASH includes the coalition of volunteer-based free tax preparation organizations that help thousands of Ohio's working families claim the earned income tax credit without charging a fee to file their taxes. Thank you for the opportunity to testify in support of Senate Bill 35.

The federal earned income tax credit (EITC) was designed to keep people working, lift families out of poverty, boost their income to help weather financial emergencies, and help offset payroll taxes, which hit low-income families the hardest. The EITC was founded in 1975 under President Gerald Ford and is considered the most powerful anti-poverty program in the nation. Last year, the federal EITC lifted 265,000 Ohio families out of poverty.[1] Nearly 1 million families claimed the federal EITC, bringing in $2.3 billion to our state’s local economies.[2]

Twenty-six states including the District of Columbia have their own EITCs. In 2013, Governor Kasich and the Ohio Legislature took the right step in implementing the Ohio EITC and in 2014 expanded the credit from 5 percent to 10 percent of the federal credit. Unfortunately, due to design flaws, Ohio has one of the weakest EITCs in the nation. According to an analysis by the Institute of Taxation and Economic Policy (ITEP), only 8 percent of Ohio’s poorest families receive any benefit from our EITC.[3] Senate Bill 35 corrects these issues to ensure that the credit meets its original policy goals by doing the following:

Making the credit refundable. Most state EITCs are refundable. Of the 26 states that have EITCs, Ohio is one of only four states with a nonrefundable credit. A refund, the result of the credit being larger than the tax owed, helps low-income families take care of their basic needs. Refundability matters and it is what helps families, children and local communities achieve positive outcomes. For example, the average Ohio EITC tax cut for a family earning between $21,000 and $39,000 is just $142. If the claimant has only $100 in state income tax liability, then the remaining $42 of EITC is lost and does not help the family. In a refundable state, the $42 would be returned to the claimant in the form of a tax refund check. Studies have shown families use their EITC refunds for childcare, car repairs and other expenses that keep them working.

Refundable credits are not new to Ohio. The state already offers refundable credits to businesses including movie producers, venture capitalists and historic building rehabilitators. With poor Ohioans already paying more of their income in state and local taxes than more affluent Ohioans do, especially in sales tax, and a refundable state EITC would boost tax fairness.

Removes the income cap. Ohio’s EITC is unique in that it has an income cap for families that earn over $20,000. The federal EITC has gradual decline of support as families earn more. However, Ohio’s credit cuts short the intentional, slow phase-out of the federal EITC and creates a benefit cliff. Specifically, a family with taxable income over $20,000 cannot claim the full value of the state EITC. They can only claim half of their state income tax liability. This design flaw, significantly limits the benefit to families as they work to reach the middle-class.

The federal income tax credit was designed to reward work, lift families out of poverty, boost local economies and support tax fairness. While Ohio has made progress by implementing a state EITC and then expanding the credit, it is still weak and does little to help the states’ poorest working families. Senate Bill 35, would put the Ohio EITC in line with the federal credit and majority of the other states.

Mr. Chairman, thank you for allowing me to testify on this legislation. I am happy to answer any questions that you or any of the other members of the committee may have. 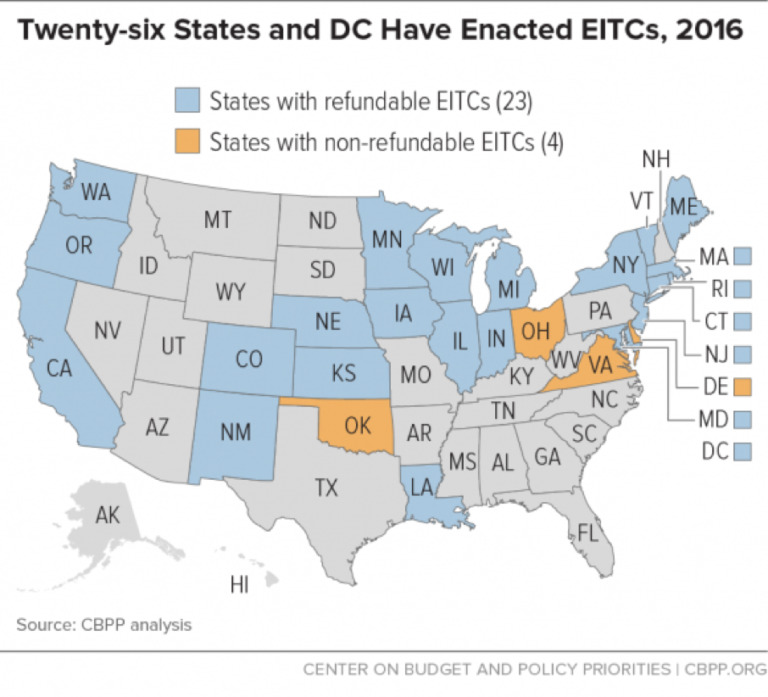