Housing is a basic need that can be exploited for a profit. For some, homeownership provides stability and wealth, but many who aspire to own a home are taken advantage of by predatory lending practices. Communities that are locked out of traditional home buying because of income, race, and credit history are common targets for exploitative practices. Land installment contracts, also called land contracts, are one way of exploiting buyers. These contracts, common during legal housing segregation, have seen a resurgence as tightened access to conventional lending has reduced home-buying options for many aspiring home-owners.

A land contract is a seller-financed home purchase transaction where the buyer makes payments directly to the seller over time, and the seller agrees to transfer the title to the buyer after the house has been paid in full. They can include egregious terms like exorbitant fees, buyer-required repairs, and balloon payments. In Ohio if a buyer defaults before making substantial payments, the seller can cancel the contract through a process called forfeiture, which allows the seller to force the buyer to leave and to forfeit all prior payments and investments entirely. Land contracts are often advertised as an alternative model to homeownership, but usually they represent a blatant predatory lending practice that harms buyers and communities.

In Ohio, a state hit hard by the foreclosure crisis, investors, like Harbour Portfolio Advisors, are buying foreclosed derelict properties in bulk, marking up prices, and selling houses on contract. From January 2008 to January 2018, there were 47,610 recorded land contracts in Ohio.[1] This number does not include the large number of unrecorded contracts.[2] Land contracts often provide the illusion of homeownership to the buyer but are instead a predatory agreement that deeply, almost exclusively, advantages the seller.

To address the issue of predatory land contracts, Ohio should provide greater legal protections for land contract buyers, allowing seller financing to be restricted to terms that are fair, equitable, and ethical.

For buyers, predatory land contracts bring the responsibilities of homeownership without the benefits. Under current law, buyers have few protections or rights under a land contract. The buyer builds no equity in the home until the principal, interest, taxes, liens and fees are paid in full. Only then does the seller transfer the deed. This rarely happens because, absent the protections and access to programming that homeowners have, buyers struggle to meet contract demands. Typically, land contracts make buyers responsible for insurance, maintenance and major repairs. These buyers are often unable to obtain repair loans or access to loan and grant programs for low- to moderate-income homeowners. If a buyer defaults on any term of the contract, they can be kicked out of their home without recourse.

Without strong regulation, land contracts are structured to advantage sellers and disadvantage buyers. A report from the National Consumer Law Center found several common exploitative features of land contracts, described in the box below.[4]

1. Lack protections of renting or mortgages. Predatory land contract purchases are designed to fail. Because the contracts lack the protections found in leases or mortgages, it is very easy to kick buyers out of their homes for defaulting on the contract.

2. Have artificially high purchase prices. Often the purchase price of a land contract is significantly higher than the house’s fair market value. Because most land contracts are sold without an inspection or independent appraisal, buyers are unaware of the true value. Over the life of the loan, buyers would typically pay much more than if they had access to traditional financing.

3. Make buyers responsible for repairs. Many homes sold by land contract are barely habitable and not up to code. The condition often prevents the home from being rented or, in some cases, qualifying for a traditional bank loan. In addition, land contract buyers are generally ineligible for loan and grant programs designed to help moderate-income homeowners make repairs. To avoid the cost of making a home habitable, sellers sell the house through land contracts, which puts the legal burden of making repairs on the buyers

For corporations, the goal of selling a house through a land contract is often to buy cheap, sell high, and kick the buyer out before they finish paying off the contract. The exploitative features of many land contracts enable this business model. In part, the profitability of land contracts depends on the ability to constantly turn over properties with new buyers. Sellers force buyers out of their homes through forfeiture clauses. Forfeiture occurs when buyers default on the terms of the contract. It is especially harmful to buyers because they do not have foreclosure protections. In Ohio, these protections only take effect after buyers have been paying their contract for more than five years. Most land contracts come with forfeiture clauses outlining what a buyer must do to avoid losing their home.[5] These requirements range from not missing payments to getting the property up to code in an allotted amount of time. Buyers of land contacts often struggle to make monthly payments because the homes they buy are below code and need significant and expensive repairs. Thus, forfeiture clauses result in the constant turnover of buyers. This, perversely, increases corporate profit.

Land contracts have a racist history. In the mid-twentieth century land contracts were used to exploit black homebuyers. From the 1930s to 1960s, the U.S. government barred black people from receiving federally backed home loans and mortgages. Because black neighborhoods were shut out of traditional credit, land contracts were often one of the only ways to purchase a home. Unscrupulous and racist speculators emboldened by discriminatory federal policy sold black homebuyers land contracts with inflated prices and impossible-to-fulfill contract terms. Many families lost their homes, down payment, all monthly payments, interest, and the costs of repairs, maintenance, and insurance when they were not able to meet the contract demands.[6] Land contracts were a part of the racist practices that stripped wealth from black families and continues to harm access to opportunity.[7]

Today, land contracts are on the rise in part because of the foreclosure crisis, which hit Ohio hard. Many of the hardest hit areas have not recovered and are in need of targeted, intensive intervention. Real estate investors use foreclosed homes as an investment. Large corporations often buy foreclosed properties in bulk at dirt cheap prices, then dramatically increase the purchase price and sell the house by land contract. In Ohio, though they have fallen significantly, foreclosure rates are still higher than in the 1990s, prior to the onset of subprime lending and the housing crisis. The predatory practices of the mortgage lending industry led to the foreclosure crisis. Now, real estate investors use land contracts to prey on communities that have not yet recovered.

After the housing crisis, real estate investment firms began buying up inexpensive houses in areas hit hard by foreclosures. Many investment firms selling homes on land contracts bought houses from Fannie Mae. These firms targeted areas with limited access to traditional mortgages and many dilapidated homes. Harbour Portfolio Advisors of Dallas, an investment firm that has been active in Ohio, was the largest buyer of homes from Fannie Mae. Harbour raised $60 million from investors to buy houses in bulk for an average of $8,000 per house between 2010 and 2014.[8] The firm purchased over 6,700 single-family houses in Ohio, Michigan, Pennsylvania, Illinois, Georgia, Florida, and a few other states. In Ohio, there are 1,329 records involving Harbour.[9] This does not capture the substantial number of unrecorded land contracts.

Harbour and other investment firms buy properties in bulk in poor communities to sell them on contract to community members at inflated prices with high interest rates. Cities like Youngstown, Toledo, Dayton, Akron, and Cincinnati. The City of Cincinnati sued Harbour Portfolio for “predatory and unconscionable” practices targeting low-income residents,[10] including practices like selling houses for five times the purchase price. The city is suing Harbour for $360,000 in unpaid fines, fees, and violation notices.[11] In Akron, the Housing administrator’s office that oversees code violations has received several complaints about Harbour Portfolio. These are a couple examples of an out-of-state firm preying on Ohio communities.

How Ohio is affected 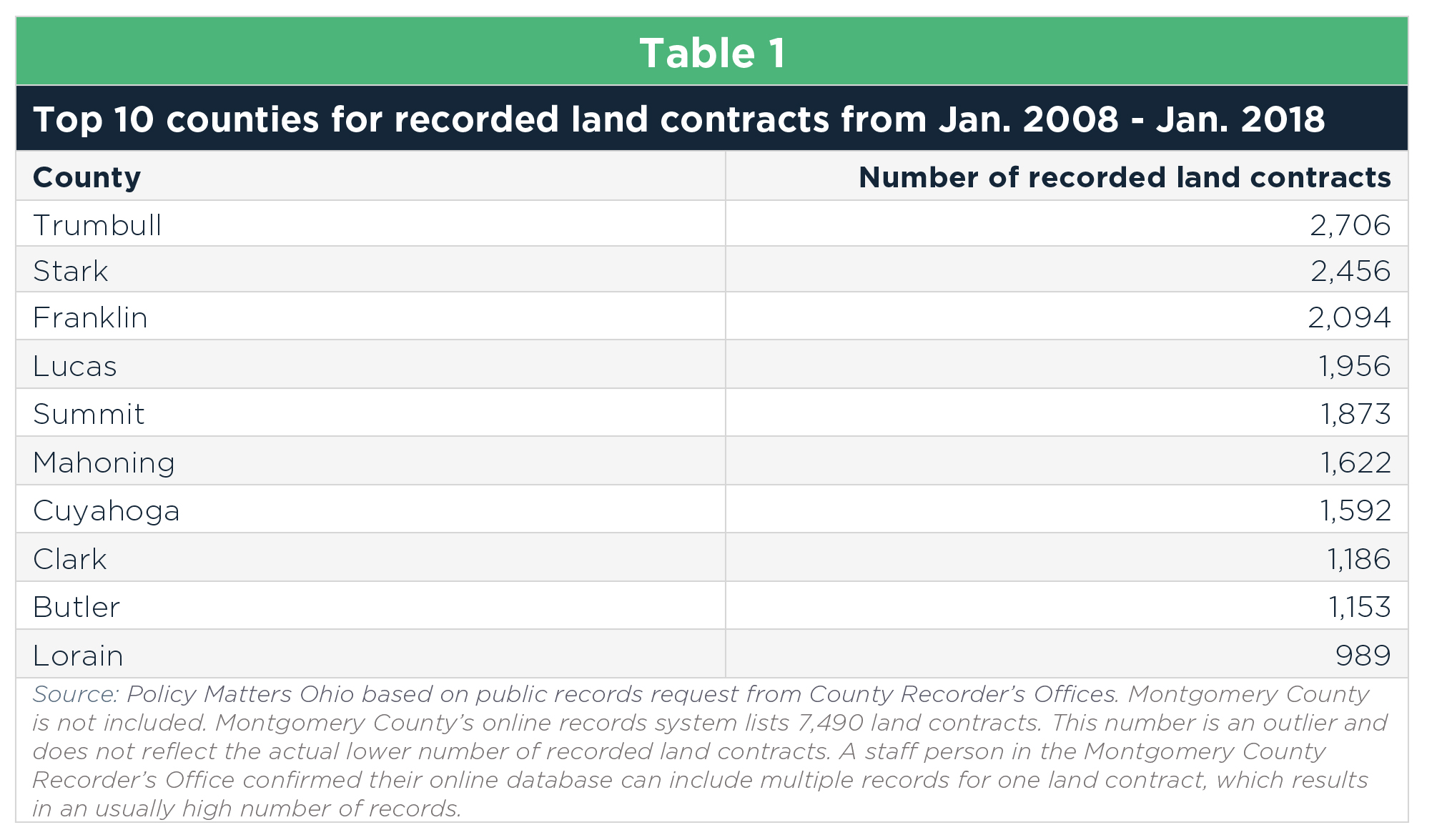 (Click here for and interactive version of this map.) 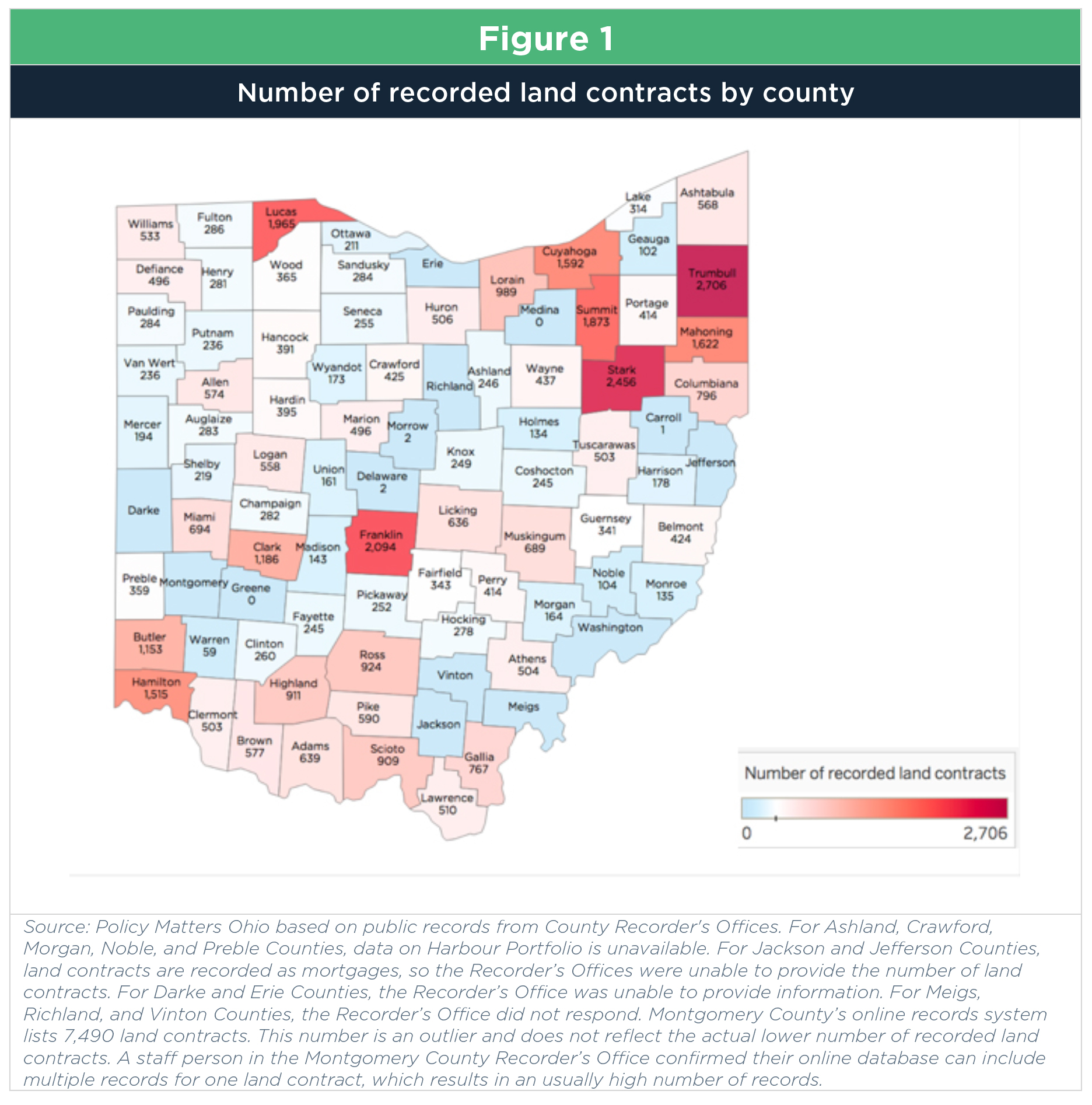 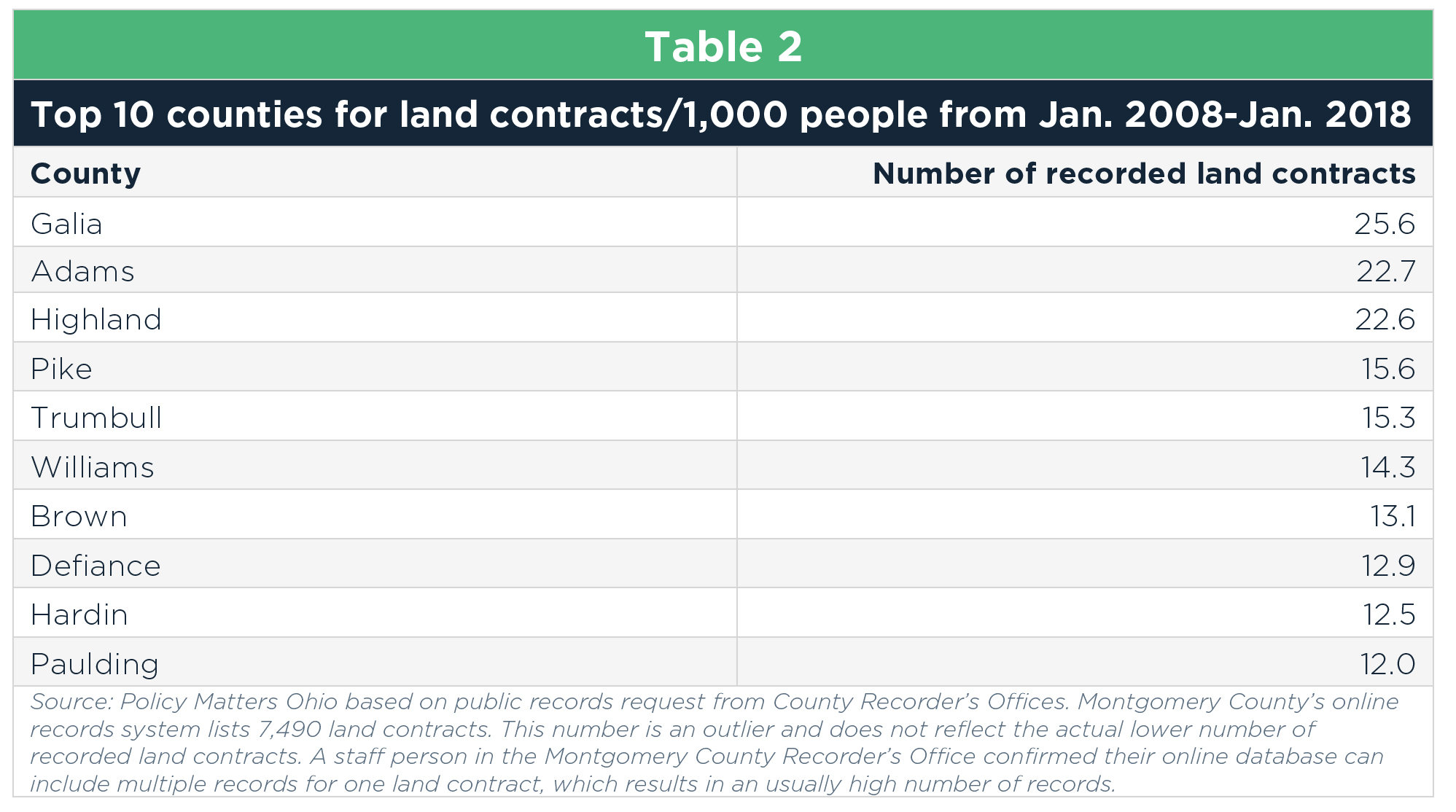 The map in Figure 2 shows the number of recorded land contracts per 1,000 people.

(Click here for an interactive version of this map.) 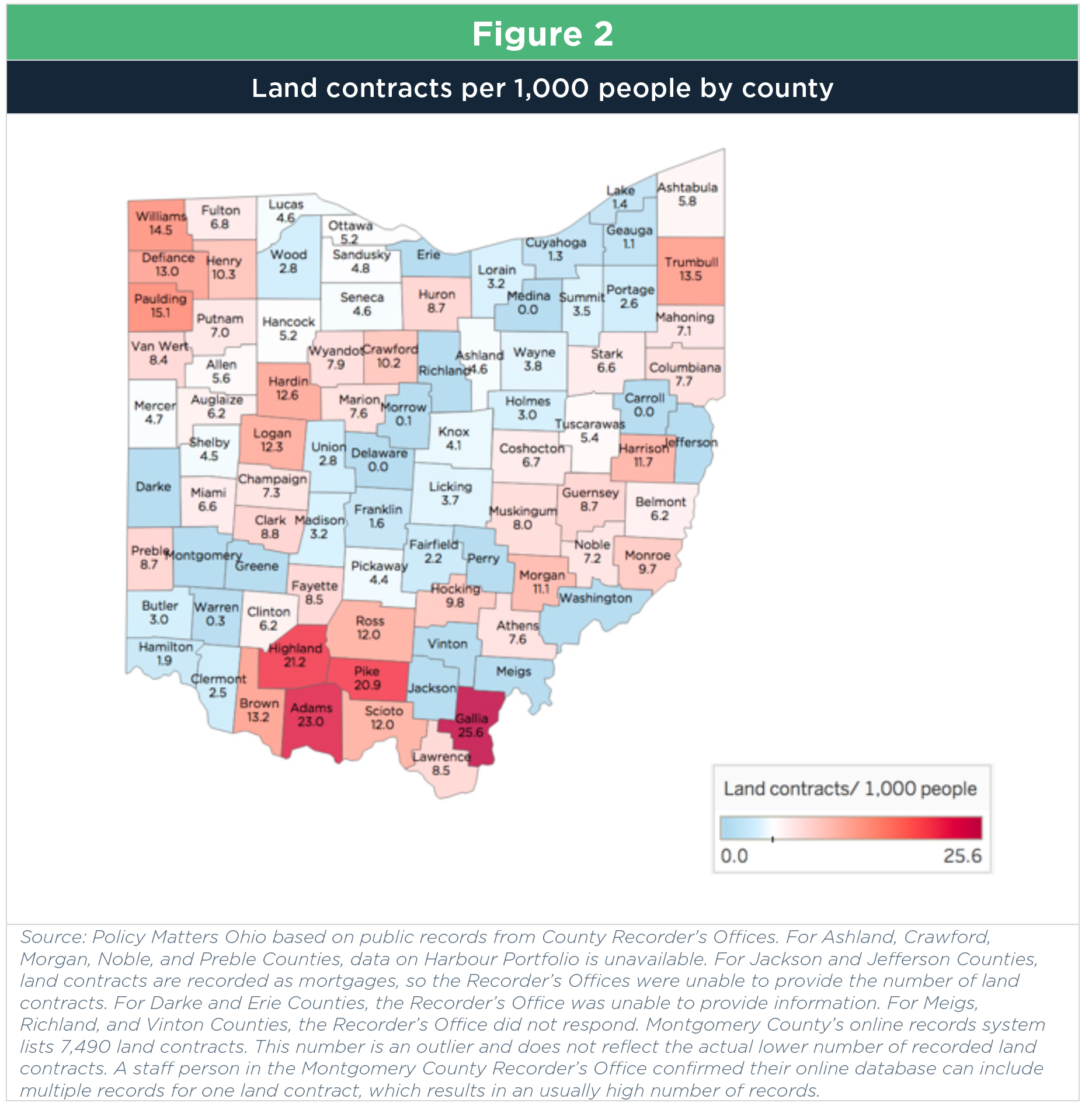 Predatory land contracts are a threat to communities because weak regulation allows investors and others to exploit homebuyers for profit. Ohio’s land contract law is not sufficient to protect Ohioans from problematic corporations and contracts. Ohio law spells out the definition and requirements for land contracts, rights of the buyer and seller, and the process of forfeiture and contract cancellation. Ohio law favors the rights of sellers. There are some laws protecting buyers, but not enough to stop the sale of bad contracts and protect buyers and the money they have invested in houses. Also, buyers often do not have access to legal representation to help enforce their rights. Existing law contains the following provisions:

The existing land contract law in Ohio does not sufficiently protect homebuyers. There are several problematic provisions, like requiring buyers to pay taxes, assessments, and other charges against the property, and not having foreclosure protections for buyers who have been paying their contracts for less than five years. Lawmakers should do more to protect Ohioans from predatory land contracts by passing laws to protecting buyers from common exploitative features of land contracts.

Ohio needs to create better rules for land contracts and better enforce them once they’re in place. Without regulation, Ohioans are vulnerable to predatory practices. Community leaders have been working with the legislature to document the problems and put forth best practice solutions. Solutions should include:

It is essential that Ohio protect its people from predatory land contracts. Legislators should support measures to shield Ohio communities from predatory practices that strip wealth from homebuyers and harm neighborhoods.

For funding and other assistance that made this work possible, we thank the Raymond John Wean Foundation, Youngstown Neighborhood Development Corporation, Trumbull Neighborhood Progress, Tessa Perry, and Ester Khaykin.