Public sector should (and sometimes does) step in

The United States built its health care system around employer-sponsored health insurance. This approach leaves out many Ohioans and many Americans. In 2016, Ohio employers covered only 5.8 of 11.4 million Ohioans.[1]

The public sector covers many people who do not get employer-based coverage. According to the Centers for Medicare and Medicaid Services, Medicare covers 1.8 million Ohioans aged 65 or older, many of whom are retired from work, and 360,000 people in Ohio with disabilities. Medicaid provides health coverage to 1.2 million children and over 1.1 million low-income adults between the ages of 18 and 64. Another 200,000 Ohioans gained direct access to coverage through the publicly-subsidized health insurance marketplace.[2]

More can and should be done to ensure equal access to health care in the richest nation in the world. The public sector can, should, and already does compensate for deficiencies in our employer-based system of health care coverage.

There are approximately 250,000 private-sector establishments in Ohio, employing close to 5 million workers. Of these workers, only an estimated 3.2 million are eligible for health benefits from their employers, leaving 1.7 million private-sector workers without employment-based health insurance options. Even fewer of these workers are actually enrolled in their employer’s health care program. Table 1 provides detailed information on Ohio employer health care offerings in 2016—by size, and industry sector. Here are the major takeaways: 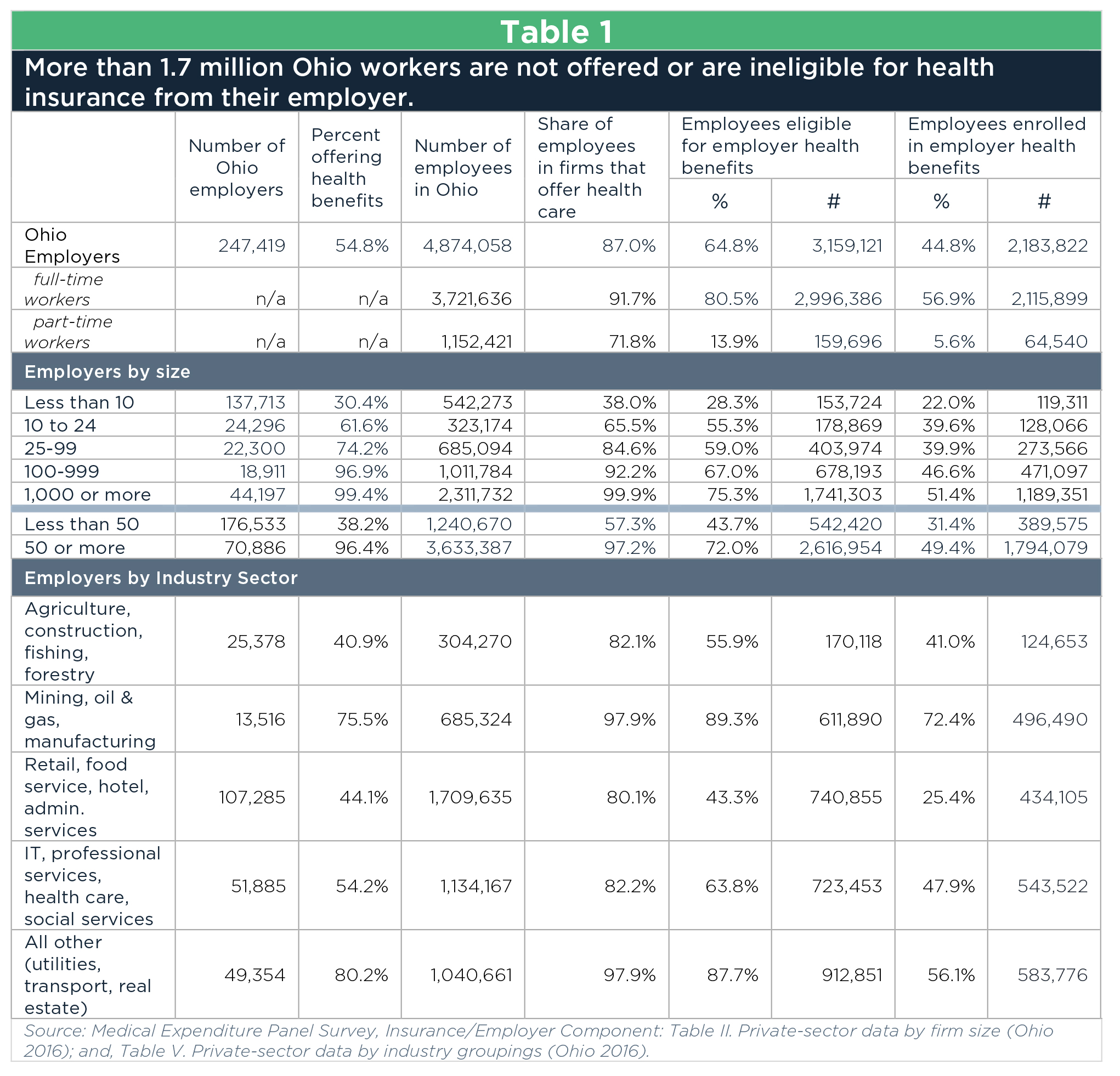 Many of the 1.7 million Ohio workers not eligible for employer health benefits are employed by low-wage employers who primarily hire part-time workers. Nearly two-thirds of low-wage employers—firms where more than half of the employees made less than or equal to $11.50 per hour in 2016 (the 25thpercentile for hourly wages that year)—did not offer health benefits to their employees.

Low-wage employers offered health benefits to less than one third of their 1.2 million employees, and only 15.2 percent of these workers are actually enrolled (roughly 178,000). These employers pay low wages, limit worker hours and usually provide minimal benefits, leaving too many workers without health benefits or the ability to pay for health insurance themselves.

Employees at low-wage firms are less likely to take up coverage. Fewer than half of employees eligible for health benefits from their low-wage employers enroll in coverage compared to three-quarters of eligible employees in higher-wage establishments, likely because they cannot afford the employee contribution. 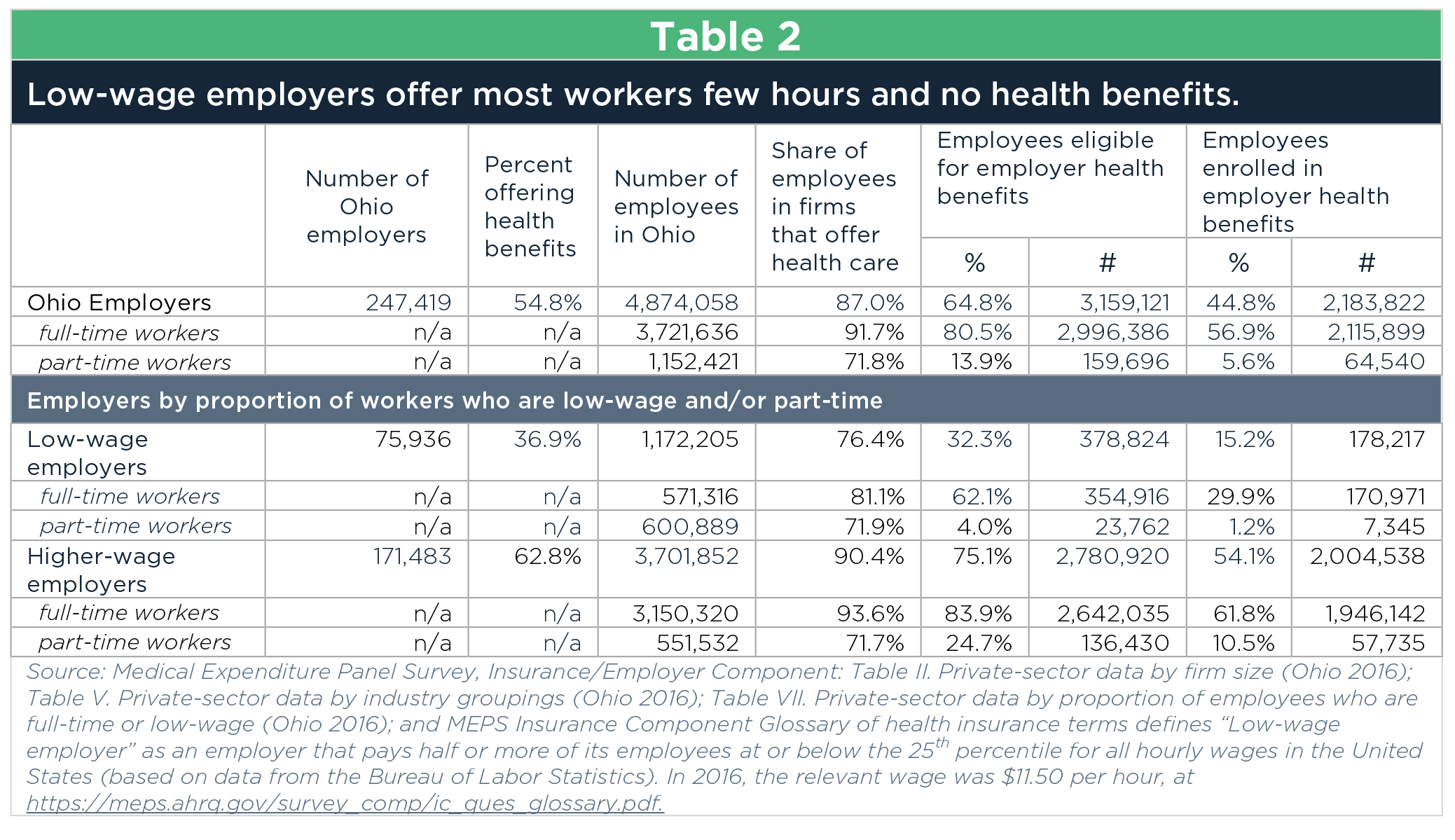 Reduced eligibility: Over the past 20 years, as costs to provide health care to employees rose, employers limited the number of employees deemed eligible for their health coverage by cutting hours, making workers temporary, imposing waiting periods, and other strategies.[6] While the proportion of Ohio firms that offer health benefits to their employees declined by 8 percent between 1996 and 2016, the number of employees who were considered eligible for their employer’s health offerings declined faster, by 18 percent over the same period (the years for which we have comparable data).

Declining enrollment: Actual enrollment by employees in their employer’s health insurance program declined even further, with 33 percent fewer Ohio workers enrolled in 2016 than 1996. As suggested in Table 3 on the following page, this is likely due to employers requiring their employees to pay a larger share of the costs. 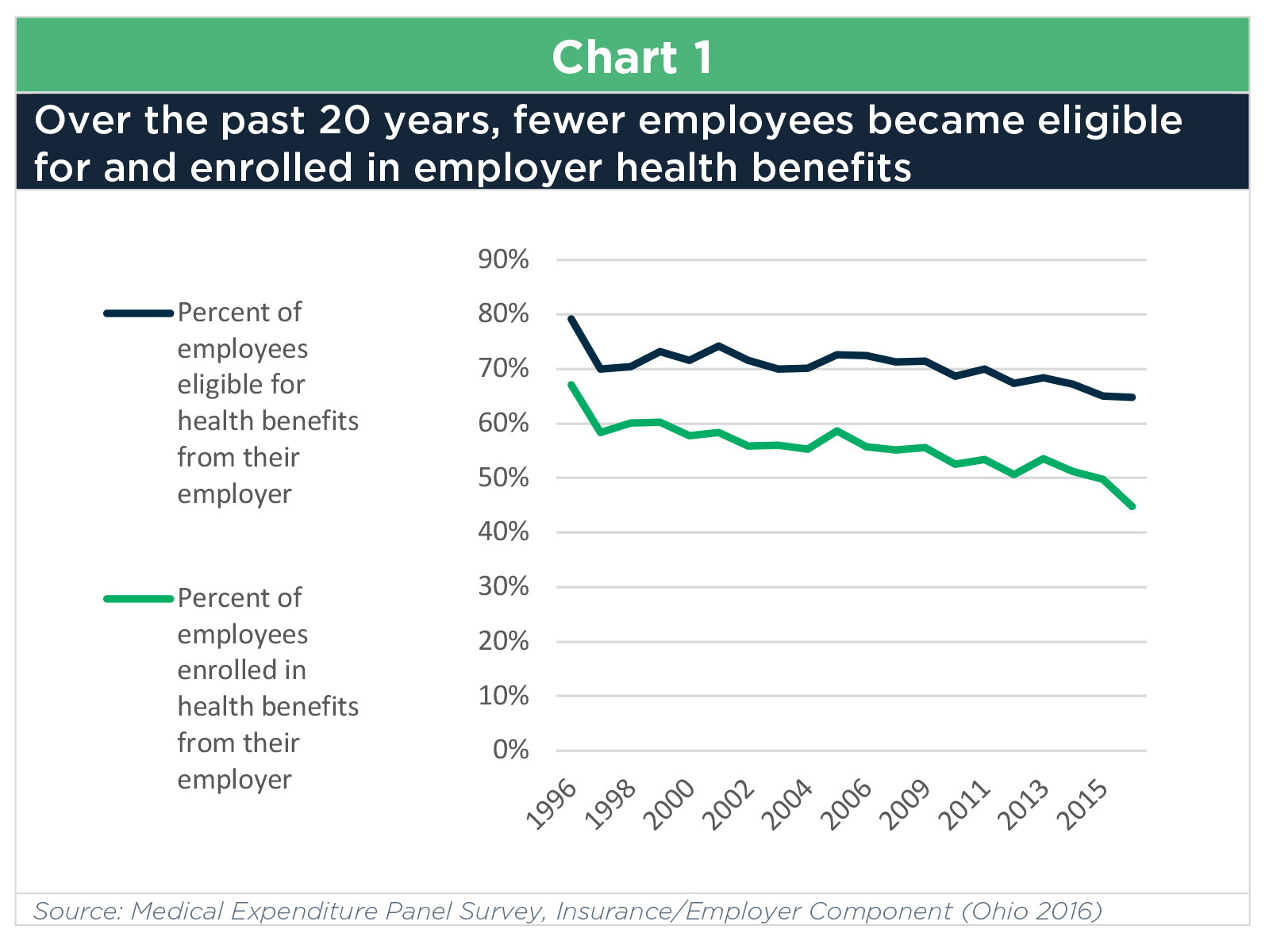 2016 employee cost-sharing burden is high:[7] Low enrollment in employer-based health care programs is likely due in large part to the size of the employee contribution required. Low-wage employers require a 27 percent contribution on average from the employee for single coverage and 28 percent for family coverage.

The required employee contribution toward the average premium for family coverage amounts to almost $6,000 for the year (or roughly $500 per month), as shown in Table 3. For a low-wage worker earning $11.50 an hour and working full time, year-round (40 hours, 52 weeks), the employee contribution for family coverage amounts to 25 percent of earnings before taxes. For the majority of workers at low-wage firms who are part-time, the share of income would be even higher. Single coverage for the low-wage worker amounts to 6 percent of pre-tax income. This helps explain why workers who do enroll in their employer’s health insurance coverage usually opt for single coverage only (64.9 percent).

Increasing premiums: Between 2000 and 2016, average premium costs for health coverage in Ohio doubled for single coverage and tripled for family coverage at low-wage establishments, while required cost-sharing for those premiums nearly tripled for these employees. 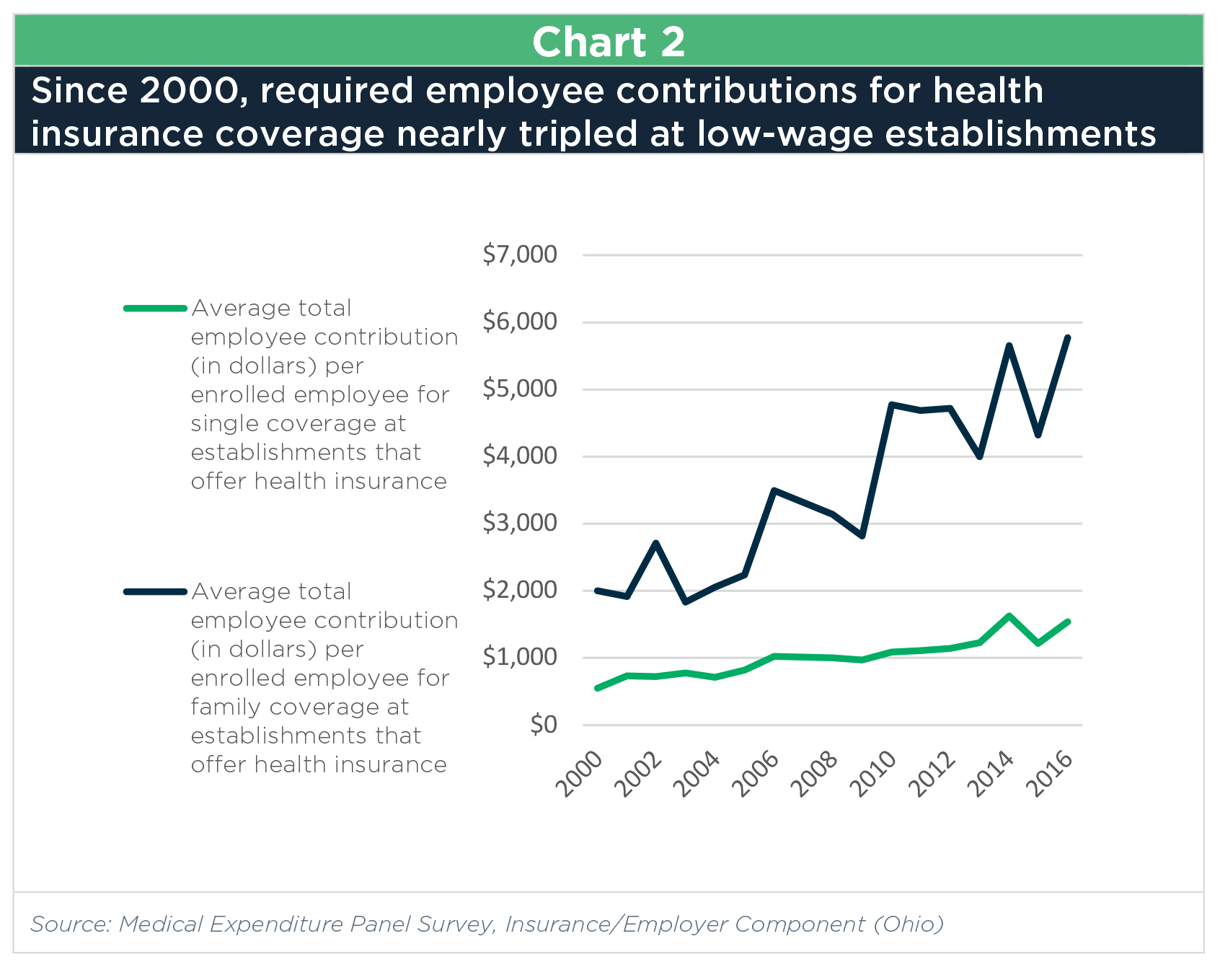 The United States and Ohio built our health care system around employer-sponsored health insurance. This system was never perfect. Over the past few decades, however, Ohio employers offered fewer employees health benefits and they increased the cost-sharing burden for employees deemed eligible.

Creating new barriers for people to access public health care programs will only serve to reduce coverage. This is true of work requirements and any other obstacles that make it harder to enroll in Medicaid. Low-wage employers maintain a large part-time workforce, at least in part to avoid offering them health benefits. Even working full time for low-wage employers does not ensure health coverage. Four in 10 uninsured adults in Ohio work full time.

More can and should be done to ensure universal access to health care in the richest nation in the world. Unless we are prepared to require employers to offer health benefits to all workers and their families, public health care programs will have to make up the difference.

Public sector should (and sometimes does) step in