Medicaid expansion has helped hundreds of thousands of Ohioans see a doctor when they are sick or injured. Health coverage makes it easier for workers to work and for unemployed people to look for work. The Ohio General Assembly has mandated that the state seek federal approval to make expanded Medicaid enrollees meet work requirements. This will drive down health coverage.

Medicaid matters to families and the economy

Medicaid insured 3 million Ohioans in state fiscal year 2017. Of these, 1.23 million were children and 1.26 million were adults in the covered families and children (553,958) and Medicaid expansion (714,654) categories. Seniors, people with disabilities and others made up the rest.

The uninsured rate among working Ohioans fell from 12.4 to 7.4 percent between 2013-2015, as Medicaid expansion and subsidized insurance of the Affordable Care Act started up. In March of 2014, 140,865 workers employed by Ohio’s 50 largest employers – including Walmart, McDonalds and Kroger – were enrolled, along with their family members, in Medicaid.

In Ohio, 61 percent of working-age Medicaid enrollees are employed: 40 percent, full time and 21 percent, part time. Another 22 percent have an illness or injury that prevents them from working and 12 percent are caregivers. Five percent are not working for other reasons: some are students, some retired and some are looking for work (Chart 1). In other words, most working-age adults in Medicaid who are not disabled are likely working, looking for work, providing care, studying, injured or ill in a way that prevents ongoing work.

More than half of employed enrollees in Medicaid expansion, and three-quarters of job seekers, reported that having health care made it easier to work or look for work. A majority found household finances improved due to better ability to buy food, repay medical debt and pay rent.

Work requirements are barriers to care and counter to Medicaid goals 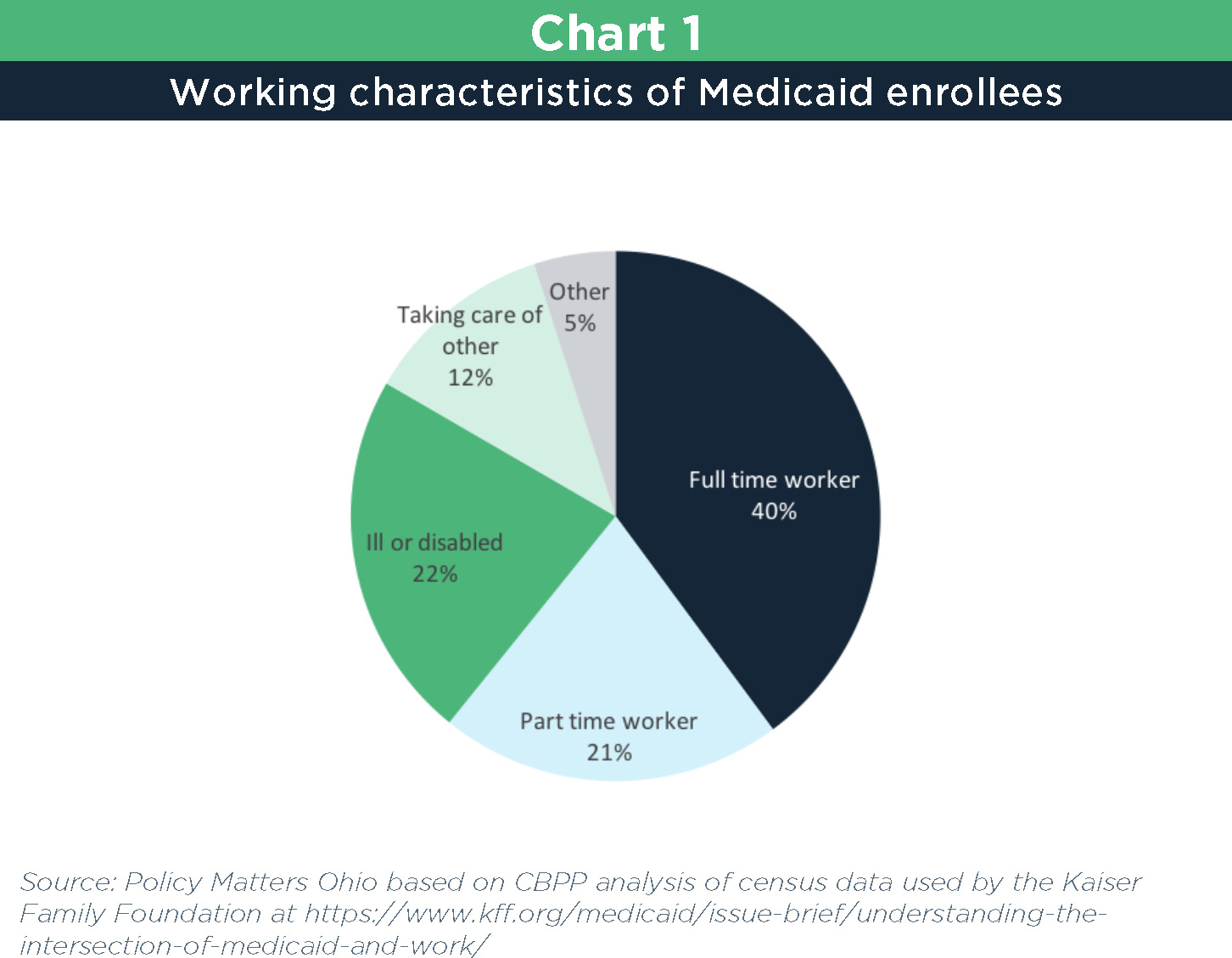 Research on work requirements in other safety net programs shows this strategy has failed to help people gain long-term employment and earnings sufficient to escape poverty.

In 2013 and 2014, following stricter enforcement of work requirements in Ohio Works First (the state’s cash assistance program), failure to meet work requirements was the primary reason people left the program.

Statewide, 370,000 fewer Ohioans are enrolled in SNAP since the resumption of work requirements October of 2013. A Franklin County study of those who lost food aid found nearly one-third reported a physical or mental health limitation.

Federal guidance on work requirements suggests caregivers, students and disabled people may be exempted, but whether they are or not depends on how a state writes the proposal. The first approved Medicaid demonstration project with work requirements in Kentucky would reduce enrollment by 95,000; it is already being challenged by a lawsuit.

Low-wage jobs typically have low, variable hours and frequent layoffs, so even employed enrollees may fail a work requirement. Instability of low wage employment may make reporting changes in hours and earnings an insurmountable barrier for some and impose significant administrative costs throughout the health care system.

In short, Medicaid expansion has dramatically increased access to healthcare for Ohioans and most new enrollees work. Rigid work requirements would not meaningfully improve work participation, but they would kick people off of insurance, many who are working, reversing hard-won progress in Ohio. Physicians groups like the American Medical Association, the American Academy of Family Physicians, the American Academy of Pediatrics and others oppose work requirements because they impose unnecessary barriers to health care.