By Wendy Patton and Amanda Woodrum

Since Ohio accepted federal funds to expand Medicaid in 2014, the program has provided health insurance to more than 1 million Ohioans.[1] It has strengthened the state’s economy and put tens of thousands of Ohioans to work. Ohio will have almost 54,000 more full and part-time jobs in 2019 than it would have had we not expanded Medicaid.

Medicaid expansion extended health insurance to working age adults who live in or close to poverty. Most enrollees were formerly uninsured.[2] Although more than 60 percent of working-age people enrolled in Medicaid do work,[3] few get health benefits through their employers.[4] As Ohio’s economy has changed, more and more people work in sectors with very low pay and no or limited benefits. Full-time workers in six of Ohio’s 10 largest job categories – like food service, retail, hospitality, and janitorial - earn so little at the median that a small family qualifies for Medicaid.[5]

Medicaid expansion also strengthens Ohio’s economy. It brings more than $4 billion a year into Ohio from the federal government to cover over 90 percent of the cost of care for enrollees. Ohio’s Office of Budget and Management estimates that by 2021, the federal government will put $5 billion annually into Ohio’s Medicaid expansion program. The way Ohio’s program is structured, the state cost will be just 3.2 percent of the total cost of this expansion. Once related savings in other parts of the state’s budget are accounted for, state cost will drop to just $163 million, a cost to the state of less than $300 per person for full coverage. This is a very good deal for Ohio.[10]

The influx of federal dollars from Medicaid expansion has a big impact on Ohio’s economy. In November 2018, Policy Matters Ohio, with help from the National Education Association, developed a forecast of what the state economy will look like in 2019 with or without Medicaid expansion. The analysis was prepared using the Regional Economic Models, Inc. (REMI) model and illustrates how eliminating or limiting Medicaid expansion would hurt Ohio’s economy (see Appendix for methodology).

The analysis projects Ohio’s Medicaid expansion will add 53,914 full- and part-time jobs to the Ohio economy in 2019, compared to a scenario where Medicaid expansion is eliminated. Medicaid expansion boosts disposable personal income by $2.7 billion and the state’s gross domestic product by $3 billion in that year. The greatest benefit comes through earnings, particularly in the health care industry sector. Earnings in that sector are higher by 2.41 percent ($1.1 billion) than in a scenario without Medicaid expansion. When the health sector expands, more people work in health care, spending more money that circulates throughout the economy, benefitting workers in other sectors: This is known as the multiplier effect. In 2019, wage and salary earnings of workers in construction will be 1.34 percent higher ($182 million) with Medicaid expansion than in a scenario in which Medicaid had not been expanded. Wage and salary earnings in retail trade will be .62 percent ($123 million) higher. State Gross Domestic Product would be boosted by nearly half a percent ($3 billion) thanks to the expansion of Medicaid. 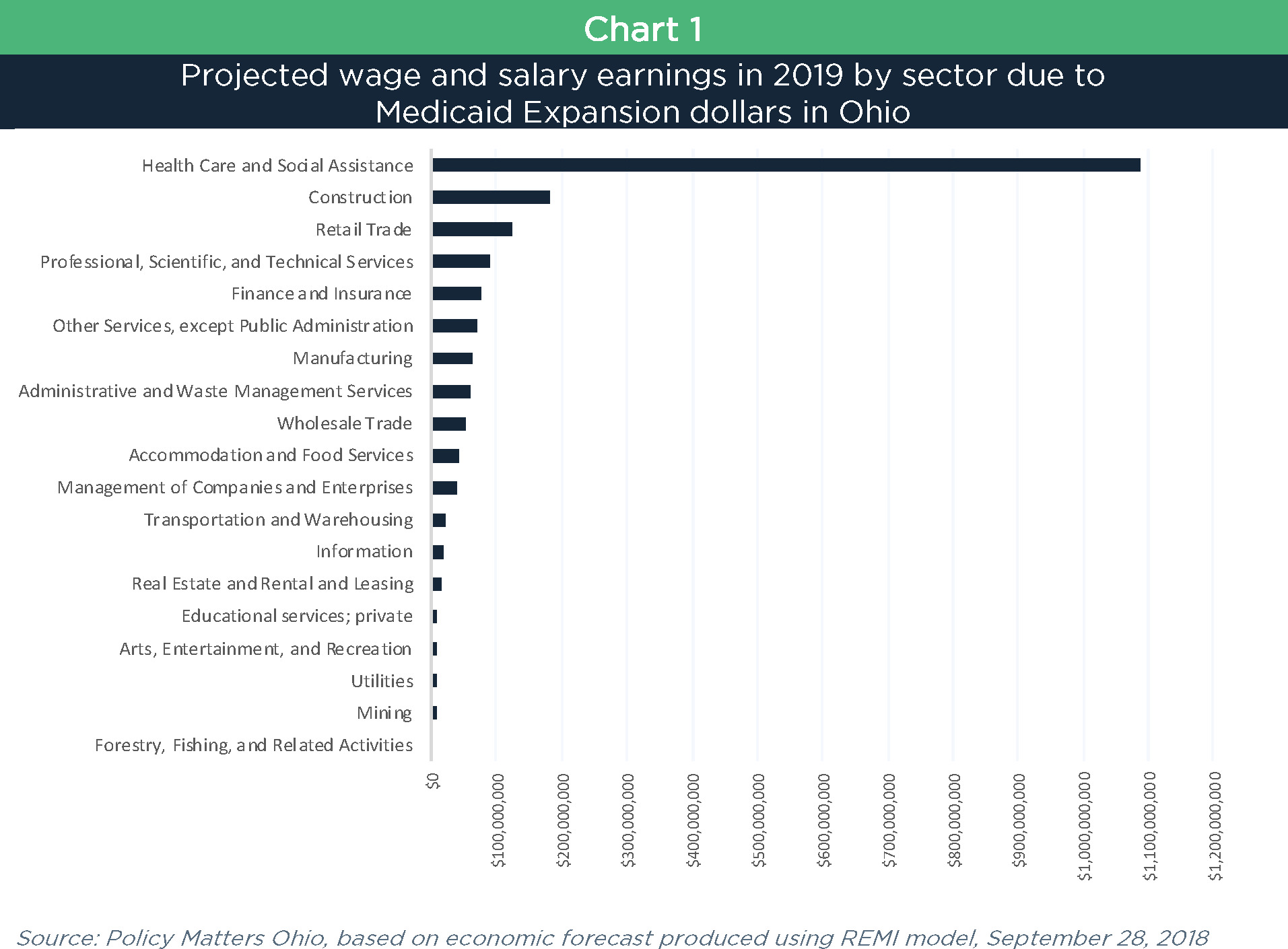 The health care sector has been a bright spot in Ohio even as other sectors declined or grew more slowly. This is expected to continue: almost a third of industry groups projected to add the most jobs in Ohio between 2012-2022 are health care providers like home health services, outpatient care centers and continuing care centers. Today, four of Ohio’s top 10 employers are hospitals and health care providers.[11]

These jobs are especially important in Ohio’s most urban and rural counties. In 2017, the two counties where private health care jobs are the largest share of the private employment base are Lawrence County (25.4 percent) and Scioto (22.9 percent), where almost one in four is a health care worker. There is a strong concentration as well in counties like Jefferson (22.4 percent), and Allen (22.2 percent). Private health care jobs are equally important in Mahoning County (19.8 percent), Montgomery (19.6 percent), and Cuyahoga (18 percent). In these counties, roughly one out of every five private-sector employees works in health care.

Employment is particularly concentrated in these places, but it is an important part of the economy in many counties. For example, private health care jobs make up 11.1 percent of the jobs in Van Wert County, 10 percent in Medina County, 13.6 percent in Morrow County, and just about 12 percent in Pickaway, Muskingum and Butler Counties.

Medicaid expansion strengthens our economy, creates jobs, expands wage and salary earnings and helps people get healthier in every county of the state. The benefits are too great to be upended. Ohio’s Medicaid expansion should be continued. Eliminating Medicaid expansion or enacting policies designed to cut enrollment, like freezing enrollment or imposing stringent requirements on work hours, unachievable for many low wage workers given uncertain scheduling in many jobs, will result in the loss of good health care jobs and earnings across all areas of Ohio.

The report reviews the economic impact of Medicaid expansion on:

The purpose of this analysis is to provide a broad illustration of the economic and employment consequences of a Medicaid expansion in Ohio. Since the majority of the increased cost for Medicaid expansion is borne by the federal government, there will be a substantial increase in federal funds into Ohio annually (referred to here as a primary flow), creating a positive economic impact, even though some of the costs are paid by the state. The majority of the costs are paid to health care providers, but those providers distribute the funds in the form of salaries to staff, payments for other goods and services, and state and local tax payments.

This pass-through of funds (secondary flow) moves into the broader state economy, eventually flowing into areas like mortgages, rent, utility bills, food, transportation and educational services. In a similar way, a third flow of funds occurs in the form of wages and salaries, which are in turn spent by the households of working people. This is how the original funds circulate through the state’s economy, called the “multiplier effect.”

Data for this analysis was provided by Policy Matters Ohio based on data on the website of the Ohio Legislative Service Commission.[12] Using these inputs, a Regional Economic Models, Inc. (REMI) report for Ohio was created by the National Education Association using a structural macroeconomic model to quantify the impact of Medicaid expansion on the broader Ohio economy. The REMI model simulated the statewide net fiscal and economic effects of expansion, and assessed the net effect of the changes in healthcare spending along with the direct costs to the state from additional enrollees, while considering the federal contribution both in the short and longer term. A scenario in which the Medicaid expansion did not occur was also run. The two scenarios—a world with and without the expansion of Medicaid—were compared and the differences between them is covered in the issue brief.

The three healthcare sectors used in the model are outlined below with definitions from the U.S. Census Bureau’s North American Industry Classification System, along with one consumption category:

Ambulatory Health Care Services: Establishments in this sector provide health care services directly or indirectly to ambulatory patients and do not usually provide inpatient services. Health practitioners in this sector provide outpatient services, with the facilities and equipment not usually being the most significant part of the production process.

Hospitals: This sector provides medical, diagnostic, and treatment services that include physician, nursing, and other health services to inpatients and the specialized accommodation services required by inpatients. Hospitals may also provide outpatient services as a secondary activity. Establishments in the hospitals sector provide inpatient health services, many of which can only be provided using the specialized facilities and equipment that form a significant and integral part of the production process.

Nursing and Residential Care Facilities: Industries in the Nursing and Residential Care Facilities subsector provide residential care combined with either nursing, supervisory, or other types of care as required by the residents. In this subsector, the facilities are a significant part of the production process and the care provided is a mix of health and social services with the health services being largely some level of nursing services.

State Government Spending: This analysis accounts for the state’s share of costs for the Medicaid expansion. Increased costs to the state were dealt with by increasing general revenue taxes and a dedicated purpose fund made up of taxes on health care providers and drug rebates collected from pharmaceutical companies. For 2019, the state share of direct Medicaid costs will be 7 percent of the total costs, with the remaining 93 percent covered by the federal government. In the scenario without Medicaid expansion, the increased cost to the state was removed, as were the flow of federal funds into Ohio for this purpose.

Federal Government Spending: The Affordable Care Act created new revenue sources to cover most of the costs of program expansion across the country (although some of those sources have since been challenged and are in question). These new revenue sources will be collected regardless of whether Ohio continues its Medicaid expansion program or not. Therefore, we did not factor in any changes to revenues collected from Ohio taxpayers should Ohio choose to curtail its Medicaid Expansion program.

The REMI model treats the input data as demand for health care services. This demand induces growth in health care industries, the effect of expanding government spending on healthcare. Please note that only a portion of the health care expenditures result in increased output by state firms. For example, some patients, particularly those living near state borders, may receive care in an out-of-state facility. Consequently, not all of the new Medicaid spending will be in-state. The regional purchase coefficient estimates the amount of demand satisfied locally. Of course, in turn, if a bordering state expands Medicaid, Ohio health care providers would have increased revenue. But since this report focuses only on Ohio policies we assume