Testimony: Medicaid - Barriers to care in the operating budget

Testimony: Medicaid - Barriers to care in the operating budget

Good afternoon Chairman Oleslager, Ranking Member Skindell and members of the Committee. Thank you for the opportunity to testify. I speak on behalf of Policy Matters Ohio, a non-partisan, not-for-profit research organization with a mission of contributing to a more prosperous, equitable, inclusive and sustainable Ohio. We ask you to protect the Medicaid expansion, but without barriers to care: work requirements and premiums.

Nearly a thousand people protested to the Centers for Medicare and Medicaid Services last year against the “Healthy Ohio” waiver proposal which included premiums on adult Medicaid enrollees. The waiver was rejected. Premiums are proposed again in House Bill 49 for Medicaid enrollees earning between 100 percent of the federal poverty line ($11,880 a year or $990 a month for a single adult without children) and the income ceiling of 138 percent of poverty ($16,400 or $1,367 a month for a single adult.) Table 1 illustrates that people eligible for Medicaid live well below the level of self-sufficiency and lack money to pay for premiums. 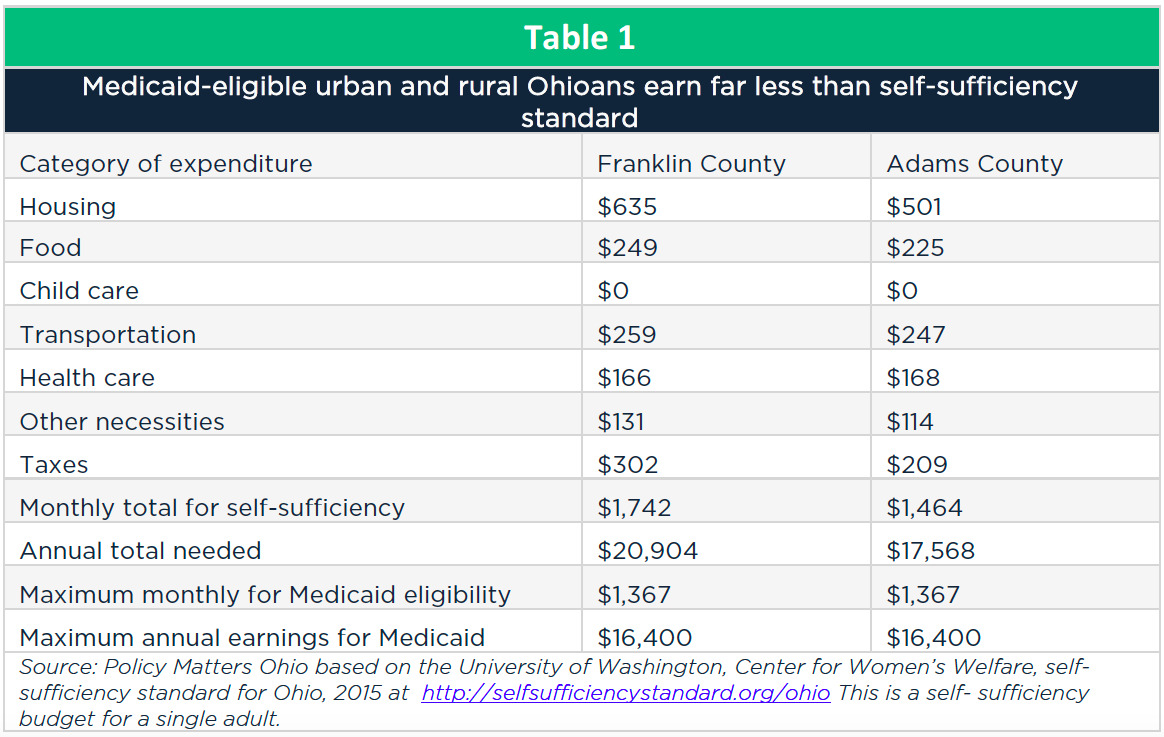 For people on very limited incomes – like those on Medicaid – premiums decrease use of health care services. Low-income individuals are especially sensitive to increases in medical costs. Modest co-payments can reduce access to necessary medical care.[1] The Rand Corporation’s Health Insurance Experiment, a long-term, experimental study of cost sharing, found that health care without barriers improved serious symptoms among the sickest and poorest patients.[2] Here in Ohio, MetroHealth Hospital’s early experiment with Medicaid expansion had similar findings: The expansion of readily accessible care, without cost, enhanced health.[3] A study in the Journal of Health Economics found that among those earning less than 150 percent of the federal poverty level, a monthly premium of up to $10 causes 12 to 15 percent of enrollees to drop out within the first few months of coverage.[4] As you may recall, the Kasich Administration projected that the Healthy Ohio waiver proposal would reduce enrollment by 125,000 to 140,000 people in each of the five years of the demonstration project.[5]

Median hourly wages in Ohio are below the national average, and many struggling people and families need Medicaid coverage.[6] Those who would be hurt the most by premiums are low-income workers in Ohio’s low-wage labor market, working in Ohio’s largest job categories (Table 2). (Table 2 assumes a 40-hour a week job, year round, but the reality of many of these jobs is that “full time” means far fewer hours a week than 40.) 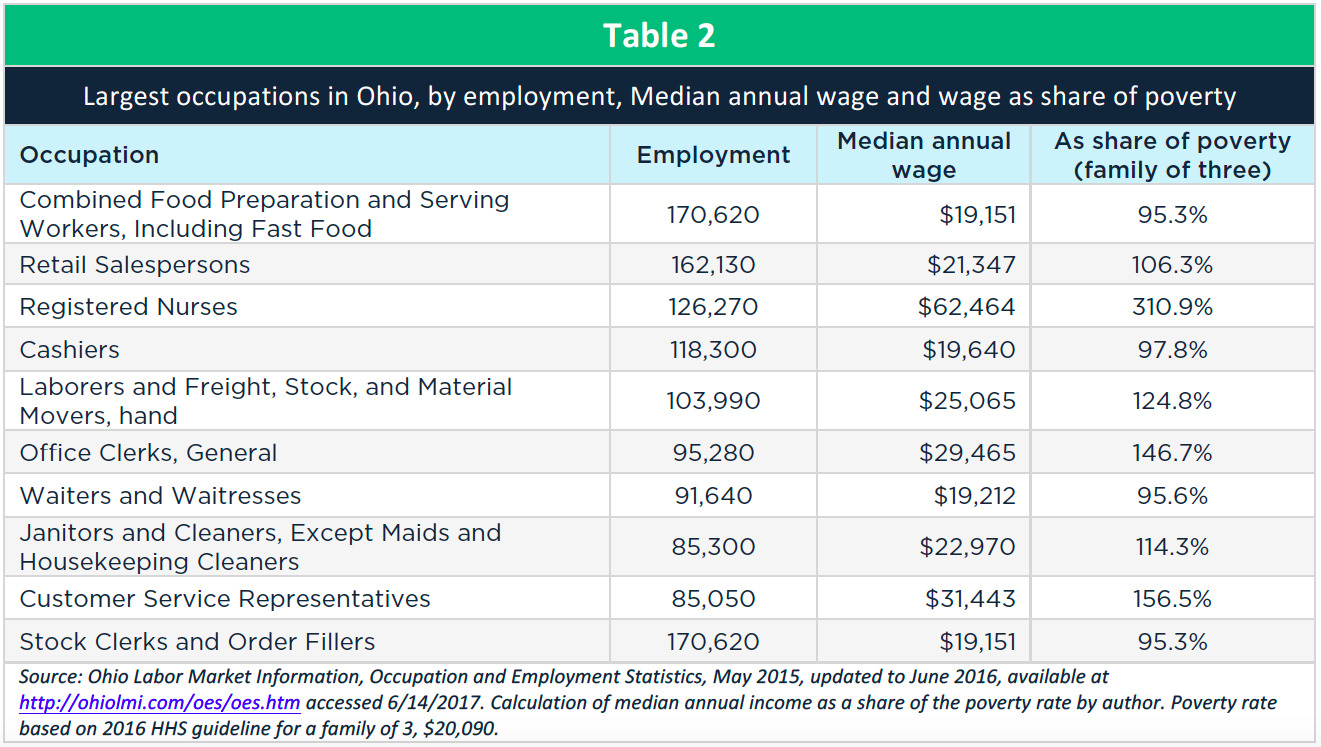 Work requirements have been found to be either ineffective or harmful.[7] Medicaid expansion by and large benefits low-income workers in the kinds of job categories shown in Table 2. The Governor’s assessment of the Medicaid expansion population found 43 percent were working, and 75 percent of the remainder were looking for work.[8] Work requirements for this group are redundant, because this group is working or looking for work in the churning low wage labor market, where jobs start and stop with seasonal demand, temporary jobs begin and end, and plants and restaurants open and close.

Work requirements are burdensome, because some people at some points in their lives can’t work. The 14 percent of Ohio’s Medicaid expansion population that was found to be neither working nor looking for work may have been caring for an ill family member, had a subtler disability (a construction worker who loses a limb; a factory worker who cannot read) or were afflicted by a level of autism. Moreover, in some places, there are not many jobs. People are exempted from work requirements for food assistance in 16 Ohio counties for this reason: Adams, Clinton, Coshocton, Gallia, Highland, Huron, Jackson, Jefferson, Meigs, Monroe, Morgan, Noble, Ottawa, Perry, Pike and Scioto. There are also five cities eligible for such an exemption: Cleveland, Lorain, Maple Heights, Warren. Youngstown and Zanesville.

Some say premiums are needed for Medicaid services so low-income enrollees have some “skin in the game. ” They already do. On average, they contribute nearly twice the share of their income in state and local taxes as the top 1 percent. 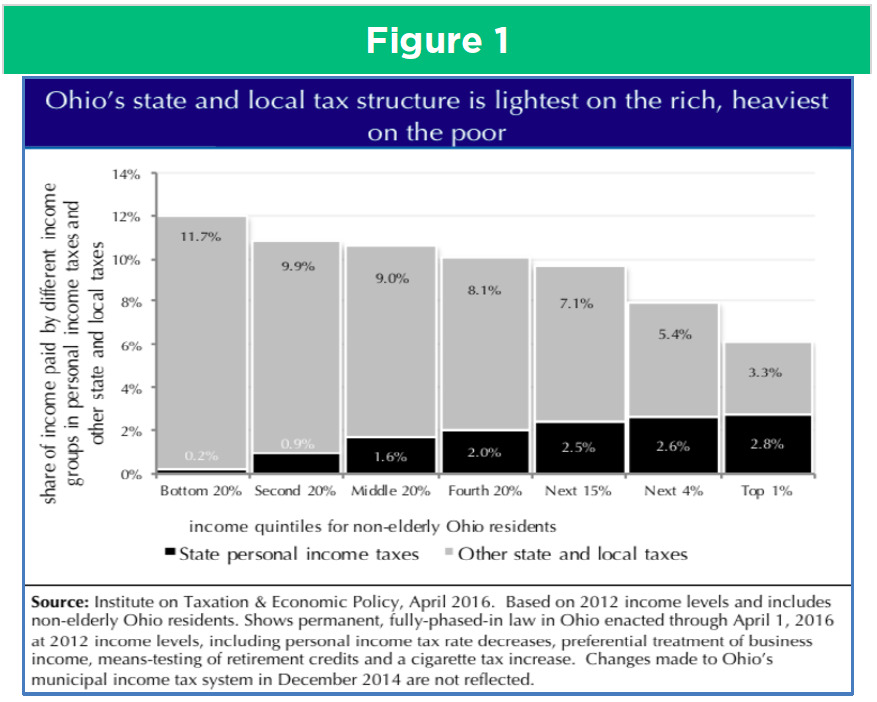 Ohio’s Medicaid expansion has succeeded in improving people’s lives and productivity through expanded health care that has helped people work and get back to work. Unemployed participants interviewed for the Administration’s assessment of the Medicaid expansion overwhelmingly reported that having access to health care made it easier for them to seek employment. The majority of workers enrolled through the expansion reported that Medicaid participation made it easier to maintain their jobs. The report found that even in the short time that has passed since Medicaid expansion, people who gained coverage through it reported gains in physical and mental health status, as well as an increase in financial security and health security.

Charging premiums and imposing work requirements pose barriers to health care and as such will prevent Ohioans from getting ahead through better health.

Thank you for this opportunity to testify.

[1] Office of the Assistant Secretary for Planning and Evaluation, “Financial Condition and Health Care Burdens of People in Deep Poverty,” United States Department of Health and Human Services, July 16, 2015