Good morning Chairman McColley, ranking member Reece and members of the Committee. I am Wendy Patton of Policy Matters Ohio, a non-partisan, not-for-profit research organization with a mission of contributing to a more vibrant, equitable, inclusive and sustainable Ohio. In our testimony today we note that the executive budget leaves many public transit agencies with less funding by the end of the biennium than they had going into it. We encourage the General Assembly to find a sustainable source of revenue to replace local sales tax revenues lost with the change of the MCO tax, to restore GRF funding for public transit to earlier levels, and to flex additional federal highway dollars for alternative transit uses.

Ohio needs a 21st century transportation system made up not only of roads and highways but also a complete network of transportation options, including public transit, passenger and freight rail, streetcars, hybrid buses, electric vehicles, and walk-able, bike-able streets. We testify today to ask the General Assembly to restore and increase Ohio’s investment in accessible, affordable and sustainable transportation options.

According to the 2015 Transit Needs Study produced by the Ohio Department of Transportation (ODOT), the gap between public transit funding in Ohio, and operating and capital needs, was $650.6 million in 2015, rising to $1.03 billion in 2025. At the time the study was published, $273.5 million in one-time funding was needed to address system backlog and bring Ohio’s transit fleet to a state of good repair.[1] Things have not gotten better: The Ohio Public Transit Association estimates that 1,200 of the 3,200 buses on the road in Ohio today are obsolete.[2]

The executive budget provides annual public transit funding of $7.3 million from the General Revenue Fund (GRF) and $33 million from federal highway funds in 2018 and 2019. The Transit Needs Study recommended the state provide $120 million a year in 2015, a sum that rises to $185 million a year by 2025.[3] This is lower than nearby states, and lower than smaller states: Minnesota funds public transit at $340 million a year; Michigan, at $200 million, and Pennsylvania, $846 million[4] (Figure A-1 in the attachments shows how other states fund transit, along with additional information about Minnesota, Michigan and Pennsylvania).

Figure 1 shows losses to public transit during this biennium. The loss stems from changes in tax policy: the removal of the Medicaid Managed Care Organization (MCO) services from the sales tax base. Because transit agencies piggyback to the sales tax, they lose revenues. 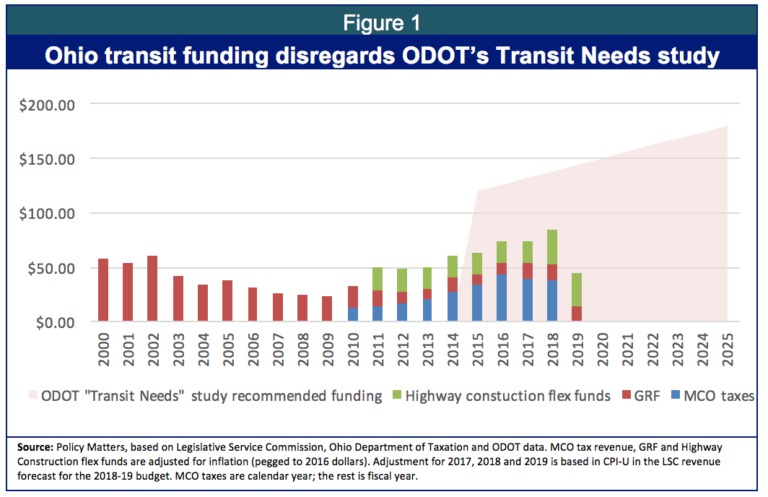 While the governor’s budget provides funding in 2018 to mitigate this loss, by 2019, the impact is heavy. For example, the eight public transit agencies that levy a sales tax would get $34.5 million in 2018, which is $4.1 million dollars less than they averaged, as a group, in 2015 and 2016. They would get nothing in 2019.[5] The rest of Ohio’s 61 public transit agencies are also endangered by the revenue loss to counties, which frequently contribute to public transit, particularly in rural places. According to OBM’s tables, 48 counties see less in the transitional payments they receive in 2018 than they got, on average, from the MCO tax (see attachment).

Over the course of the 2-year biennium, the changes to the MCO tax result in a direct loss of $4.1 million to public transit agencies in 2018 and $38.6 million in 2019 – a total of $43 million. Even with the additional $10 million a year in highway construction funds in 2018 and 2019, highlighted in Director Wray’s testimony, transit has $23 million dollars less at the end of the biennium. This does not include the cuts to counties, which may cause a reduction of local funding to public transit in rural areas and smaller cities and towns.

These losses follow years of plunging GRF support of public transit, from more than $40 million in 2000 to $7.3 million in this budget proposal. This is daunting for small and rural transit agencies, which lack local and state funds to provide the necessary match for federal capital dollars. 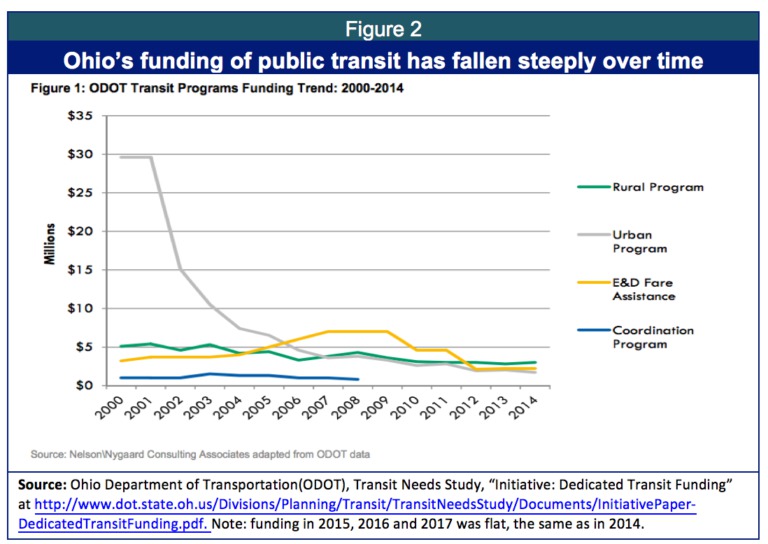 Needs for public transit and transit alternatives are high. The Transit Needs Study found that almost half of all public transit riders in Ohio had no car. Inadequate transit limits workers’ ability to take better jobs. Lack of reliable transit beyond conventional 9 to 5 work hours makes it particularly hard for service and manufacturing workers. Weak transit particularly hurts Ohioans with disabilities. Older Ohioans, who may have stopped driving, need options. And the young people we say we want to attract repeatedly voice a preference for transit, bike paths, and walkable neighborhoods.[6]

Ohio should provide both operating and capital funds to replace what is being lost and to restore our public transit systems. Rural systems often lack sufficient local funds to match federal capital dollars. Legislators should restore General Revenue Funds to the $40 million for public transit provided in 2000 and earlier.

Other states devote more federal funds to transit. The Transit Needs Study recommends Ohio use $50 million a year in flexible federal highway dollars to provide for the capital needs of transit agencies, and demonstrates that we’ve done this before and could do so again(Figure 3). 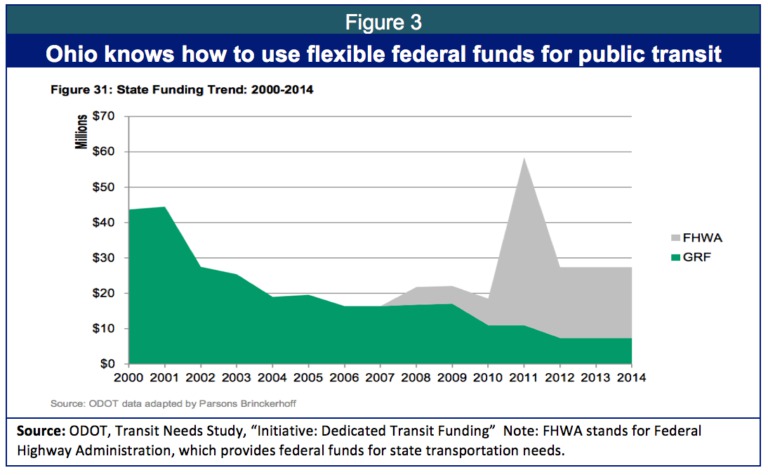 A greater investment in public transportation would yield significant positive outcomes for our residents, our communities, and our economic recovery. According to the American Public Transit Association, every dollar invested in public transit generates six dollars in economic returns, and investments in public transportation projects create nearly 20 percent more jobs than equal investments in new roads and highways.We recognize the struggles of local governments to address road and bridge repairs, due to flat motor fuel taxes and cuts to the local government fund and other local resources. Policy Matters has called for an increase in the motor fuels tax to more closely match the rates of our surrounding states, and a distribution of those funds for local uses.

Thank you for your time and consideration of this important matter, and we look forward to working with you during the budget process. I would be happy to answer any questions you might have.

[5] Ohio Office of Budget and Management, Proposed transitional aid to counties and transit authorities in response to the termination of sales tax on Medicaid Health Insuring Corporations (MHICs) http://obm.ohio.gov/Budget/operating/doc/fy-18-19/SchoolFunding/MHIC_Transition_Aid_Table.pdf