A dozen ways state budget cuts could affect you

A dozen ways state budget cuts could affect you

The lean state budget proposed for state fiscal years 2018-19 is getting skinnier by the week, as state revenues continue to come up short of projections. The budget approved by the House would cut spending deeply in some places (Medicaid) and in tiny increments across scores of agencies. Here we list a dozen potential outcomes of House Bill 49 for Ohioans and Ohio. In most cases, this draws on testimony before Senate subcommittees in May, 2017.

1. You might lose your health care… or your job: The House budget moves the state’s share of Medicaid expansion funds out of the budget, also eliminating billions of federal dollars leveraged by those funds. This is why the House budget bill is more than $12 billion smaller than the executive budget. Appropriation authority for Medicaid funding is moved from the General Assembly to a small committee known as the Controlling Board, which has the power to move (or not move) state dollars in lieu of General Assembly action. If the Controlling Board votes ‘no’ on the release of Medicaid funds, the more than 700,000 Ohioans who get health insurance through Medicaid expansion are likely to lose care and hospitals and health care providers could lose billions of dollars. People will suffer and jobs will be lost.

2. Your tax appeal may take a while: Kathleen Crowley, executive director of the Board of Tax Appeals, said in testimony on May 9 that House budget cuts would force further staffing cuts, bringing staff down to 10 full-time positions from 17 prior to the current biennium. "With a reduced staff, is it likely the board will return to previous multi-year backlogs, lengthy customer delays, and the unnecessary tie-up of homeowner and business funds." 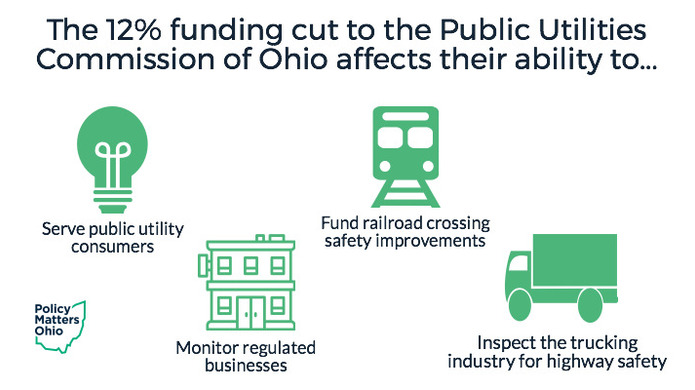 4. Essential industries may have to wait for critical services: Department of Agriculture Director David Daniels said in May 18 testimony that cuts to his agency could reduce delivery of mandated regulatory services, including the Cooperative Meat Inspection program and the Division of Animal Health, which inspects, surveys and tests for animal disease such as Highly Pathogenic Avian Influenza. Factories may need to shut down to wait for services. Jobs could be lost.

5. Short-sighted budget cuts may boost costs: Ohio’s prison system is overcrowded, with 50,281 inmates. The governor’s budget would have paid counties to keep low-level, non-violent offenders out of state prisons with funding for enhanced supervision, electronic monitoring, drug treatment or other sanctions and remedies deemed appropriate by judges. But the Ohio Senate is looking at big cuts in the ODRC budget, according to the Columbus Dispatch. Director Gary Mohr refuses to cut funding for state prisons, which are at 132 percent capacity. That puts community corrections – a lower cost solution - on the chopping block.

6. Less scrutiny of ethical practices: Inspector General Randall Meyer noted in his May 9 testimony that the staffing level of 17 is down 26 percent from when he first took office. As a result, the length of time it takes to complete an investigation has increased. The number of cases opened, including self-initiated investigations, has been reduced.

7. Localities blocked from passing laws to prevent lead poisoning of children: Toledo City Council passed a law that requires rental buildings built before 1978 with up to four units and home day-care centers to be certified “lead-safe” through passing a visual inspection for lead hazards and a dust wipe test to determine concentrations of lead dust. But a provision in the House budget bill would give the State sole authority to regulate lead abatement activities and is likely to void Toledo’s law. Nearly two dozen clergy and other community members gathered to protest, saying: “Toledo is trying to act now before there is a crisis in the name of people who are too often unheard.”

The federal government mandated a change in the tax on Medicaid managed care services, one of the state’s four health care provider taxes, which was embedded in the sales tax. The House budget made the required change but while it provides some temporary aid, it neglected to make up for the permanent revenue loss to public transit agencies that levy a local sales tax on the state base.

9. Further reduction of library services: Ohio’s public libraries receive $119 million LESS in state funding than in 2001 – a 24 percent reduction over the last 15 years (not adjusted for inflation), according the Ohio Library Council’s May 16 testimony. Libraries would lose $16 million a year during the 2018-19 budget period due to the removal of the MCO tax from the General Revenue Fund (GRF), a cut to the Public Library Fund, and diminished GRF revenues. State Librarian Beverly Cain pointed out in her testimony on May 9 that the House budget reduces the State Library’s General Revenue Fund support by 13.36 percent. "Reductions of this magnitude would be devastating to the State Library and to the Regional Library Systems, which provide direct services and support to public and school libraries across the state," she said. 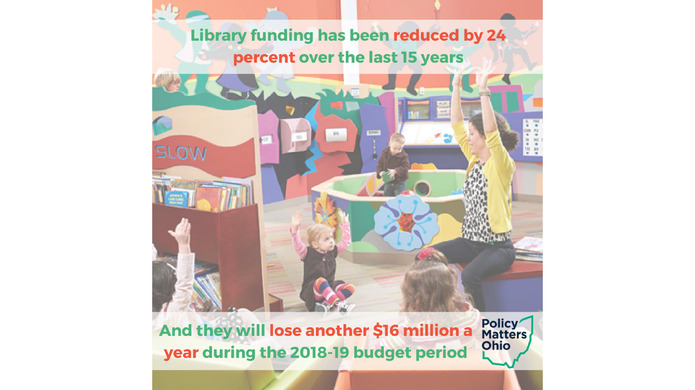 10. Disinvestment in recreation services: The Sportsmen's Alliance and other conservation groups are urging lawmakers to increase hunting and fishing fees, because of concern about counties with no law enforcement presence, decreased fish stocking, decreased wildlife habitat management, and a growing list of outstanding projects. Governor Kasich has ruled out any increase, but analysis by an alliance of conservation groups illustrates shortfalls in funding. On May 23, the group testified that since 2003, the Ohio Department of Natural Resources (ODNR) Division of Wildlife has cut staff and reduced vehicles; that fish hatcheries aren’t filled to capacity; shooting ranges are backlogged for improvements and 25 wildlife officer positions are vacant. The groups estimate that over the next 10 years, the Division will need $92.6 million for maintenance, restoration and staffing. They asked that their members be allowed to contribute to maintaining Ohio’s recreational opportunities through increased fees, but the Administration says “no.” 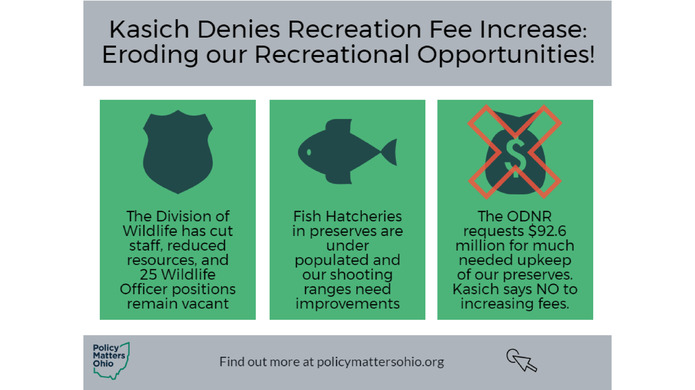 11. Local governments face another blow: Ohio’s 88 counties do the intake, eligibility, case management and administration of health and human services – Medicaid, children’s services, mental health, addiction, aging, developmental disabilities, public health and more. Local governments in Ohio have lost a $1 billion a year in state funding since 2010 — making it even harder to deliver health and human services during the drug crisis. In 2019, local governments (counties and transit agencies) lose another $160 million in annual revenue as the state narrows the sales tax base upon which they levy a local sales tax. 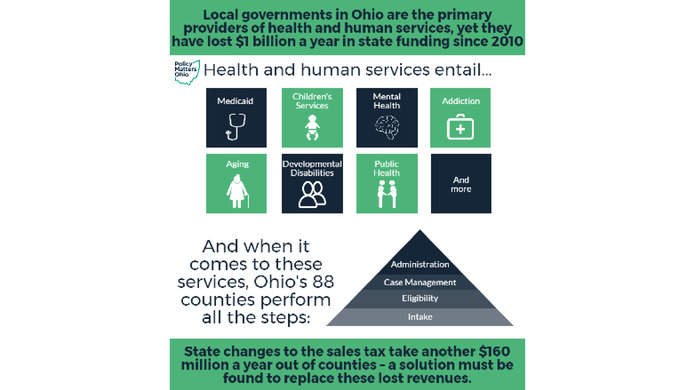 12. The shelves may be bare: In response to growing hunger across the state, especially in cities, the Ohio Association of Foodbanks requested increased state funding. However, the executive budget kept funding flat. The House budget slashes funding event further. “This loss of $500,000 per year or $1 million over the biennium proposed by this provision will result in the loss of over of 5,500,000 million pounds of produce,” said Executive Director Lisa Hamler-Fugitt in her May 24 testimony.