Last chance to stop Ohio transit from falling off the cliff

Last chance to stop Ohio transit from falling off the cliff

Public transit agencies provide 115 million rides every year for Ohioans who need to get to work, go shopping and see the doctor. The budget the General Assembly is sending to the Governor today proposes a way to fill a nearly $40 million a year hole transit agencies face due to changes to the state’s sales tax base. The danger? That the Governor may veto the provision. 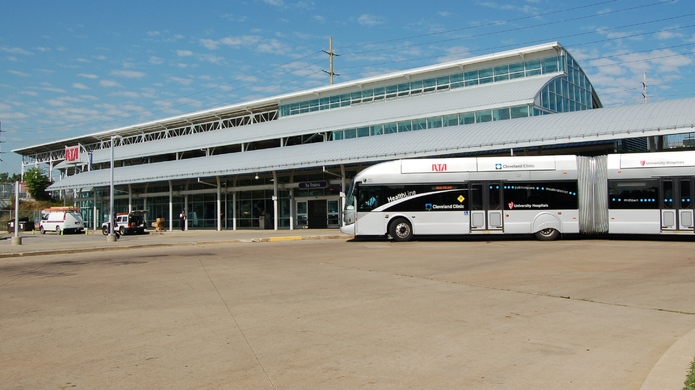 Ohio’s state aid to public transit is lower than 45 other states. Agencies like the Greater Cleveland Regional Transit Authority have already raised fares and cut routes. If legislators don’t reach a solution this week, workers on the late shift and seniors needing demand-response services will take the brunt of the blow.

In this budget bill, the Kasich Administration makes a change to the Medicaid managed care organization (MCO) tax, removing it from the sales tax base and placing it in the base of the insurance tax. Counties and transit agencies are authorized to levy a local tax on the state sales tax base. Because the state narrowed the base, these agencies will lose revenue – a lot of revenue. The loss is so great that it offsets all the funding state legislators allocated to public transit in both the operating and transportation budgets for 2018-19. 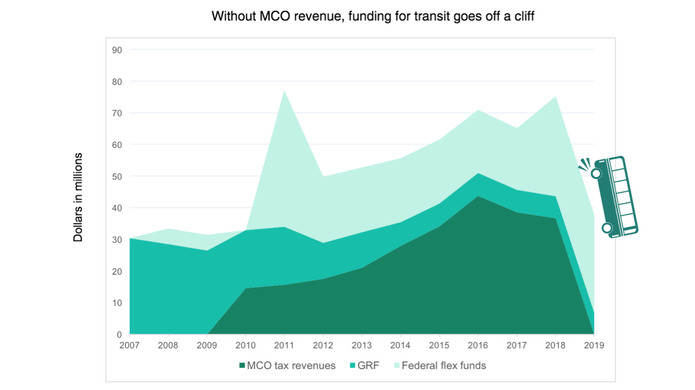 The table below shows how much these agencies received from MCO tax revenues, on average, in 2015 and 2016. The state provides the affected agencies with a one-time, transitional payment in 2018, but nothing after. 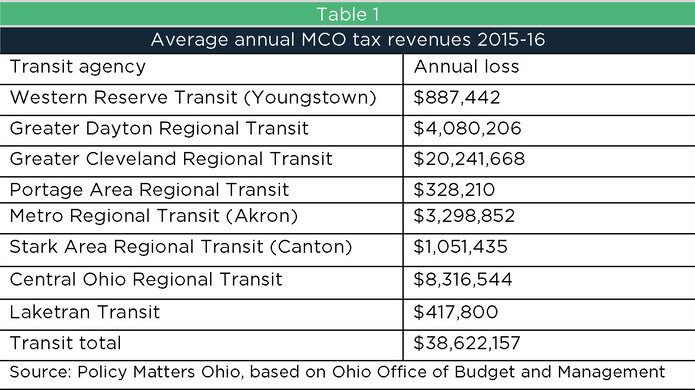 The affected transit agencies do not plan to raise local taxes. Instead they anticipate cutting services. The sales tax revenues accounted for between 6 and 7.5 percent of transit agency budgets. Some agencies predict cutting service on weekends and late night routes that serve 2nd and 3rd shift workers. Others say they will cut some lines entirely. Some will reduce service on all routes. Three agencies said they’d be forced to curtail demand-responsive or para-transit services for the elderly and disabled.

Ohio legislators worked hard to find a way to reverse this tax change that takes critical funds from counties and transit agencies. At the last moment of the Conference Committee on the budget, legislators accepted a provision that could restore the MCO tax revenue and make transit agencies and counties whole.

Ohioans for Transportation Equity is a coalition of diverse members, including environmental activists, transit agencies, labor unions, sports groups and advocates for seniors and disabled people. We call on the Governor to retain this provision in the state budget bill, and to reverse the loss of MCO tax revenues to counties and transit agencies.

If you want the bus to come on time and get workers where they need to go, call the governor at (614) 466-3555 and urge him to work with the General Assembly to fix MCO tax and fund transit now.

Tell your state senator: Invest in transit!
May 9, 2017
Dear Governor Kasich: fund transit now!
December 14, 2016
The state of public transit is nothing to celebrate
July 1, 2016