The third battle of Lake Erie

The third battle of Lake Erie

My first excursion onto the Cuyahoga River was in 1956 as a small child aboard the Carol-Diane, the predecessor of the Goodtime. The river was stinky, lumpy, brown, orange, yellow, red, and green. It left a scum line on the boat, and the experience changed my life forever. Rivers weren’t supposed to look like that. I started working on the Lake as a graduate student at The Ohio State University’s Stone Lab at Put-in-Bay in 1971. I got my Ph.D. working on the Lake in 1976 and spent almost forty years as Assistant Director then Director of OSU’s Stone Lab, Ohio Sea Grant, and Center for Lake Erie Area Research (CLEAR). Lake Erie and the Great Lakes remain my passion. Today, Lake Erie is in real trouble. Many of the programs that manage and protect our lake are under attack. 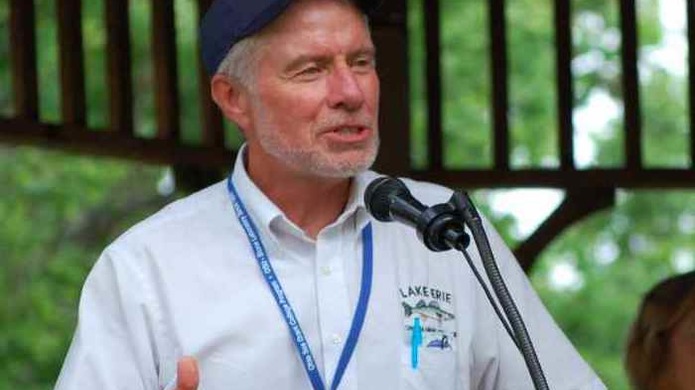 We are currently fighting the Third Battle of Lake Erie. The first was fought by Oliver Hazard Perry ("We have met the enemy and they are ours.") in 1813 aboard tall ships during the War of 1812. The Cuyahoga River burned in 1969 (actually the fifth time it had burned) and the country responded by launching the Second Battle of Lake Erie. Industries and people would not regulate themselves and water pollution was rampant across the country. Coverage in LIFE and Time Magazines made Lake Erie the poster child for pollution nationwide. The next year, 1970, President Nixon created the Environmental Protection Agency (EPA) and the National Oceanic and Atmospheric Administration and we celebrated the first Earth Day. In 1971, the Canadian version of USEPA was formed and in 1972 Nixon and Trudeau (senior) signed the Great Lakes Water Quality Agreement, allowing US and Canadian scientists to jointly set science-based targets to address phosphorus, mercury, PCBs and other pollutants. That fall, Congress passed the Clean Water Act, regulating point sources of pollution. Our goal was to reduce phosphorus coming into Lake Erie by 60%, a huge challenge, but two-thirds of it was coming from sewage treatment plants. With the Clean Water Act, we could regulate them.

We heard the same arguments we hear today: “Do you want jobs or a clean environment?” We reached our target by the mid-80s and demonstrated that you can have both. Between the mid-1970s and mid-1980s, Ohio’s walleye harvest went from 112,000 to over 5 million, our individual charter fishing businesses went from 34 to over 1,200, coastal businesses went from 207 to over 425, and we were no longer the poster child for pollution, we were the Walleye Capital of the World, one of the planet’s top 10 sport fishing locations, and the world’s best example of ecosystem recovery. Today, tourism in Ohio’s eight coastal counties employs over 120,000 and is valued at over $14 billion, annually.

Unfortunately, in the mid-90s phosphorus entering the lake began to increase again, and we are currently fighting the Third Battle of Lake Erie. Dead zones and harmful algal blooms capable of producing toxins more toxic than cyanide (400,000+ people in Toledo told not to drink the water in August 2014) are back. This is much more than an Ohio and Lake Erie problem. It is a national and world problem.

Using the Great Lakes Water Quality Agreement, I served as US Co-Chair of a bi-national team of scientists that set new, science-based targets to address the current problem (40% reduction is needed), but our challenge is different. In the 1970s we reduced phosphorus loading to the Lake by 62%, but in those days poor sewage treatment was the primary source, requiring action by a dozen sewage treatment plants. Today, the primary source is agricultural runoff from thousands of farms. This is still a solvable problem, but we all have to work together, and we need USEPA, NOAA, the National Sea Grant College Program and Ohio Sea Grant, the Great Lakes Restoration Initiative (the GLRI), the Ohio Coastal Management Program, and lots of really good science to do it!

Less than a penny from each of our tax dollars goes to USEPA. The President’s proposed budget would slash funding by over 30% and eliminate 3,000 employees. The budget calls for the complete elimination of the National Sea Grant College Program, the Ohio Sea Grant, the Coastal Management Program and the GLRI. Together those programs represent less than 1/10thof a penny in your tax dollar. Sea Grant, with its research, education and outreach focused on the environment, economy and education, is regularly recognized as one of the most cost-effective and productive programs in the country.