A new report from our friends at the Center on Budget and Policy Priorities (CBPP) finds alarming threats to American Indians and Alaska Natives in the Senate health care bill, now called the Better Care Reconciliation Act (BCRA). Here in Ohio, rates of uninsurance for this community would nearly triple. 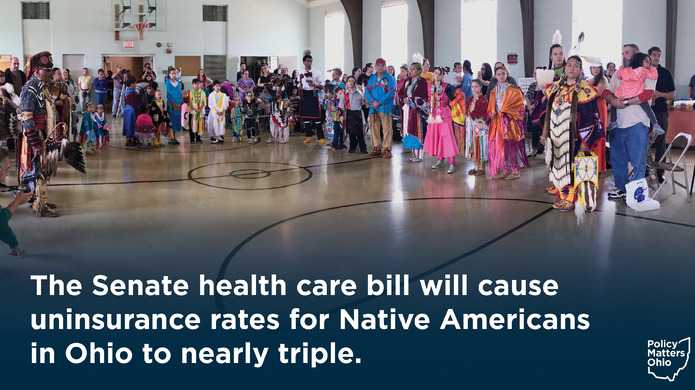 Native American tribes have a unique nation-to-nation relationship with the federal government, enshrined in the United States constitution. In exchange for trillions of dollars in land assets, the federal government is obligated to honor specific legal rights, protections, and services. This includes health care, usually delivered through tribally-run clinics, or federally-run health facilities of the Indian Health Service (IHS). Both are generally located on or near reservations.

When thinking about Native Americans, most people think of Oklahoma, the Dakotas or the southwest, not Ohio. This is because Ohio is one of just a few states with zero federally-recognized tribes. Yet, 96,500 people who are either exclusively or partly Native American call Ohio home. With no IHS facilities or tribal clinics, this population often needs Medicaid – precisely why Ohio, a Medicaid expansion state, needs to pay attention.

A little context: From the mid-1950s to 1970s, Cleveland was one of nine target cities for the federal government’s Urban Relocation Program—a federal policy that aimed to lessen the government’s responsibility to uphold obligations to Native American people by integrating them into mainstream society. The government lured families from reservations across the nation with promises of jobs and homes, which often didn’t materialize. Cleveland was strategically selected due to its distance from reservations and lack of tribes. It was a way to promote rapid assimilation and de-culturalization of our people.

Because of the Relocation era, Ohio has a significant Native American community that was intentionally left without any tribally-run clinics or IHS facilities. Prior to the Affordable Care Act (ACA), and despite guaranteed access to health care through IHS, the uninsured rate for Native Americans nationally was 29 percent. The ACA reduced this to 21 percent nationwide in 2015, but Ohio, which expanded Medicaid, did much better. Here, our uninsurance rate fell to just 7.1 percent, about 6,000 people, according to the Urban Institute.

The Senate bill would erase that progress. The CBPP report finds that starting in 2021, the Senate bill would sharply reduce the Medicaid matching rate for expansion enrollees. This would push states to eradicate their expansions, which would be catastrophic for Ohio's Native American community. CBPP projects that 13,600 Native Americans in Ohio would lose Medicaid expansion coverage - 14 percent of our Ohio population. The Urban Institute, with a slightly different methodology, finds that the number of uninsured Native Americans here would climb by 11,000 from about 6,000 now to about 17,000 people. Both reports agree that the number of uninsured Native Americans here would nearly triple. Only three states, Oregon, New Mexico and California, would see a greater share of the Native American population become uninsured.

The uncertain future of Medicaid eligibility has the Native American community here on edge. “I’m trying to schedule as many procedures as humanly possible over the next few months,” says Marlys Rambeau, Cheyenne River Sioux and executive board member of the Lake Erie Native American Council in Cleveland. Her parents came to Cleveland on the Relocation program. She is known locally for her traditional crafts, and has helped launch youth programming to pass down traditional knowledge such as beadwork and pow wow dancing. Two bad knees and severe arthritis in her hands have reduced her participation in pow wows and forced her to slow down the beadwork business that helps support her family.

“It’s really not good to have so many surgeries so close together, but I am seriously afraid of not having these things fixed,” Marlys said. “I’m too young to be crippled by arthritis.” Marlys is a community anchor, and the community needs and is enriched by her leadership.

The Health Insurance Marketplace, an important source of coverage for Native Americans, is also at risk under the BCRA. According to CBPP, Native Americans with incomes between 100 and 400 percent of the poverty line who are not eligible for other coverage may no longer receive premium tax credits. The bill also threatens essential health benefits in private insurance plans, meaning insurers could sell plans that don’t cover the basics. Because Native American adults are more likely to have poorer health, suffer from diabetes, and live with chronic disease, these coverage changes will send basic health care out of reach for most.

Marlys knows what this means for someone in her shoes. When asked about private coverage if the Senate bill were to pass she said, “I have too many pre-existing conditions, I’ll never get affordable coverage.”