Posted on 01/04/18 by Katie Fallon in Smart Transportation

In 2016, consumers, the federal government and California regulators sued the German automaker Volkswagen (VW) for allegedly manipulating emissions tests. As a settlement, $14.7 billion will be allocated to states. Ohio will receive $75 million over the next 10 years from the Volkswagen Mitigation Trust Fund. The state is required to use the funds to offset the effects of diesel emissions, improve air quality and promote infrastructure development. Twenty percent of Ohio’s share – or $15 million – will go to the state’s financially-strapped transit agencies.

Now, Ohio agencies must draft a plan to determine how to allocate these funds. Currently, the focus is on upgrading, replacing, or supporting existing freight, shipping, and ground transportation. The draft plan recommends half the funds be spent on on-road fleet and equipment projects, with $15 million allocated for the replacement of transit buses and 20 percent for school bus replacement. This would be a win for Ohio’s public transit systems, which receive very modest state support and lost funding due to tax changes in the 2018-2019 state budget. The plan is, however, still in a draft form; this means there is still time to ensure that funding is directed towards transit systems (more information on how at the end of this blog).

The settlement terms require states to focus on regions most negatively affected by diesel emissions. As a result, the primary and secondary focus of these funds will be on areas shown in the map below. 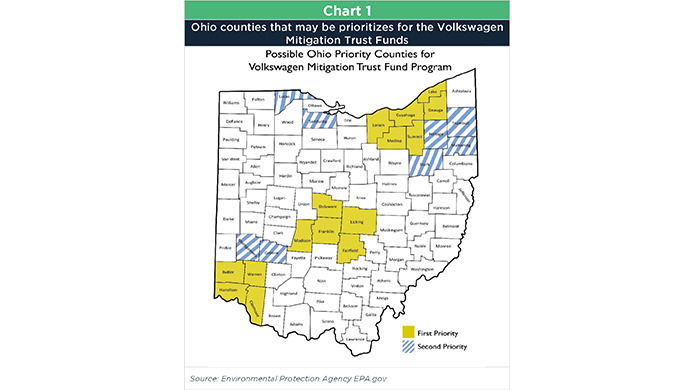 While this cash infusion helps provide needed support to Ohio’s flagging transit systems, this funding alone is not nearly sufficient to fill the long-standing gaps in transit investment. Public transportation in Ohio has been severely underfunded for years. Currently, the state allocates about $0.63 per person to transit, compared to states like Pennsylvania and Michigan, which spend over $24 per person. Although 9 percent of Ohioans use transit and the state has the 14th largest transit ridership in the country —transit only accounts for about 1-2 percent of the transportation budget each year. The result is about 35 million transit trips unmet yearly.

Ohio’s public transit systems lost an important source of funding in the 2018-2019 budget as the state cut sales taxes on managed care organizations (MCOs), harming counties and transit agencies that levy a local sales tax on the state base. The loss to public transit will be about $38 million in 2019 and each year thereafter. Table 1 shows the shortfall faced by eight transit agencies in Ohio as a result of the loss of MCO taxes. 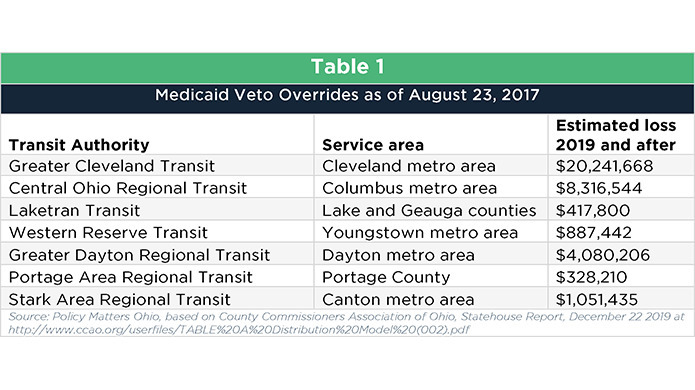 The added funds from the VW settlement helps reduce the funding decrease for the short term. In addition, a $9.8 million infusion comes out of the budget corrections bill, House Bill 69, which appropriates funding to help counties and transit with the loss of MCO tax funds. The additional $15 million from the settlement with VW adds some funds to transit authorities.

However, the state faces a dire need for a consistent stream of funding after the VW infusion stops. States have implemented similar, possible solutions to the underfunding including:

As of today, even with the additional funding for 2019 described here, next year Ohio public transit authorities will have $15 million less than they had in 2017. As a result, transit agencies will still face hard choices to increase fares (again), cut service, lay off staff, or put off purchasing needed equipment.

The decisions for how to allocate the settlement funding is not finalized yet. To support our transit, provide comments to Ohio’s EPA, which is accepting public comment via their website or by email (derg@epa.ohio.gov). Written comments may also be mailed to Carolyn Watkins, Ohio EPA-OEE, P.O. Box 1049, Columbus, OH 43216-1049, or hand delivered to Ohio EPA headquarters, 50 W. Town Street, Suite 700, Columbus, OH 43215. All comments must be submitted by 5 p.m. on Wednesday, February 7, 2018.

Last chance to stop Ohio transit from falling off the cliff
June 28, 2017
Dear Governor Kasich: fund transit now!
December 14, 2016
The state of public transit is nothing to celebrate
July 1, 2016