Lame ducks could blow up health care for many Ohioans

Lame ducks could blow up health care for many Ohioans

The lame duck session of the 132nd General Assembly may look like it’s winding down, but Republicans could roar back into town to dismantle Medicaid expansion. They have until the end of the year to override Governor Kasich’s veto of the Medicaid expansion freeze, a provision in the 2018-19 budget bill that would knock hundreds of thousands of low-wage workers and others out of the health care system.

Governor Kasich may veto some lame duck bills and legislators may show up in the last days of December to override those vetoes. At that time they could go one step further with an override of last year’s veto of the freeze. This would be a kick in the pants to Kasich as he walks out the door. The estimated half-million Ohioans who lose health care would be just collateral damage of political warfare, and so would the 54,000 jobs created by the billions of federal dollars Medicaid expansion brings into the state every year. 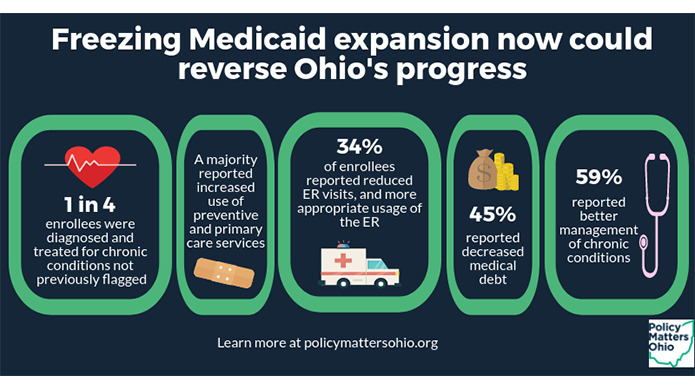 This General Assembly fought bitterly over Medicaid expansion, which provides health care to almost 700,000 Ohioans of working age who earn little more than poverty-level wages. If you are as concerned as we are about preserving health care for low-wage workers and other Ohioans, call your legislators and tell them to protect the Medicaid expansion – not to end it. A Texas judge’s recent ruling on the Affordable Care Act (ACA) does not change the need to defend Medicaid expansion and the ACA.

New attack on Medicaid could erect barriers to care
December 5, 2017