In the 2010-11 state budget, legislators and the governor began moving transit funding to the Transportation budget from the General Revenue Fund, where annual allocations had been steadily shrinking, putting Ohio near the bottom among states in transit funding per capita. Since then, policymakers of both parties have funded transit in the Transportation budget, where it has grown steadily. Last night, a conference committee of House and Senate members removed transit from the transportation budget altogether. Policy Matters Ohio Senior Researcher Amanda Woodrum issued the following reaction:

“Instead of funding transit through the Transportation Budget, where it belongs, the conference committee increased transit funding in Ohio’s General Revenue Fund to $70 million. This is less than half of the $150 million a year recommended in the Ohio Department of Transportation’s 2015 Transit Needs Study, but substantially more than the meager amount awarded in the previous biennial budget ($39.5 million) and more than what Governor DeWine had recommended.

Transit should be a line item in the transportation budget. Ohio needs a balanced approach that provides multiple options to getting where we need to go. Our transportation system should be more than just roads and highways. We also need affordable, accessible, environmentally-friendly transportation options like public transit, passenger rail, and bikeable, walkable streets. 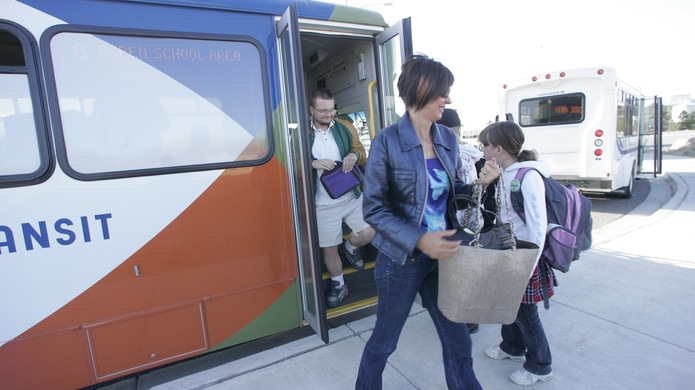 Consider this: $70 million a year is about 2 percent of the $7.4 billion two-year Transportation Budget. The federal transportation budget is more balanced with an 80/20 split between roads and public transit.

The governor proposes to spend $527 million on school busing each year, to give Ohio school children a ride to and from school each day eight months a year. School districts recently testified that they need more than this. If $527 million isn’t enough to get children to school, how can $70 million be enough to get everyone else in Ohio everywhere else they need to go?

State allocations to transit have slowly but steadily increased over the past few budgets, a victory for riders. But the General Revenue Fund is a precarious place for transit funding. In previous decades, public transit steadily declined as a line in the GRF where it competed with other important demands like health care, education, and economic development. Public transit doesn’t win that battle. There is no guarantee even that these funds will remain intact while the General Assembly finalizes the GRF budget between now and June.

A larger allocation for transit, while not enough, is a win for riders, for employers, for workers and for people who can’t or don’t drive. But this allocation is for transportation. It belongs in the Transportation budget.”