Between 2004 and 2018, the U.S. Department of Labor found 6,417 instances of wage theft at 270 Cleveland companies according to analysis from Policy Matters Ohio.

The Policy Matters analysis includes only the violations that were claimed under the federal Fair Labor Standards Act and brought to the U.S. Department of Labor for enforcement. There are likely more that have not been reported. Find Cleveland’s top 20 wage and hour violators in the table below. 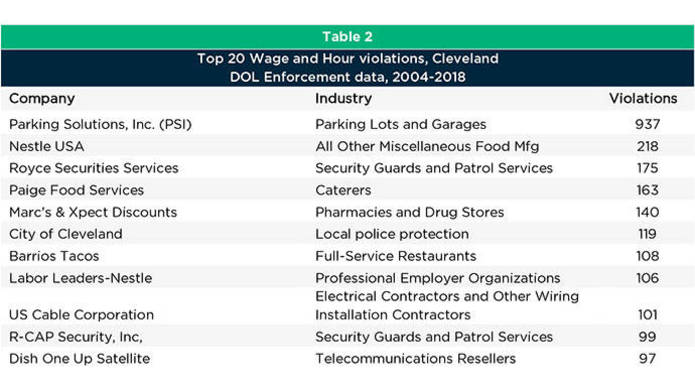 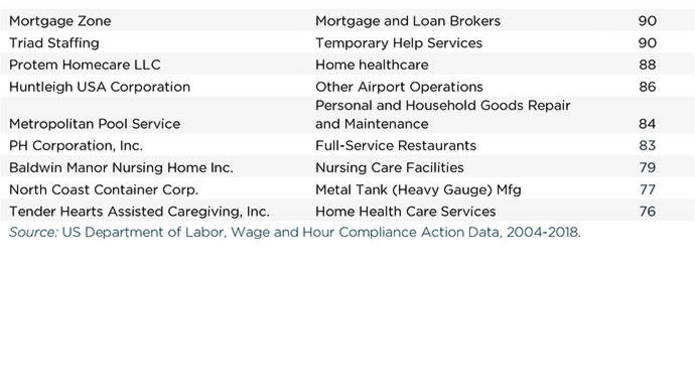 Ohio employers commit wage theft about 217,000 times each year, costing workers an estimated $600 million, or about $2,800 for each affected worker, according to the Economic Policy Institute. Misclassifying employees as contractors is another common form of wage theft. That happens 900,000 times a year in Ohio, according to the state attorney general, and costs about $790 million in lost unemployment compensation payments, workers’ compensation premiums, and state income taxes.

“When employers refuse to pay promised wages, pay less than the minimum wage, fail to pay for all hours worked, or don’t pay overtime compensation as required by law, it is theft,” said Policy Matters Senior Project Director Hannah Halbert. “In Ohio, a person who steals $2,800 can be charged with a felony and spend up to a year in prison. Employers found guilty of wage theft usually just pay back a portion of the stolen wages.”