By William Vidmar and Hannah Halbert

Everyone who works deserves a fair wage for all their hours on the job. But about 217,000 times each year, an employer pays an Ohio worker less than the minimum wage. These violations alone cost Ohio workers an estimated $600 million – about $2,800 for each affected worker, according to the Economic Policy Institute.[1] The Ohio Attorney General’s office estimated that approximately 459,000 times annually, employers misclassify Ohio workers as contractors, when they are really employees.[2] This costs the state about $790 million in lost unemployment compensation payments, workers’ compensation premiums, and state income taxes. 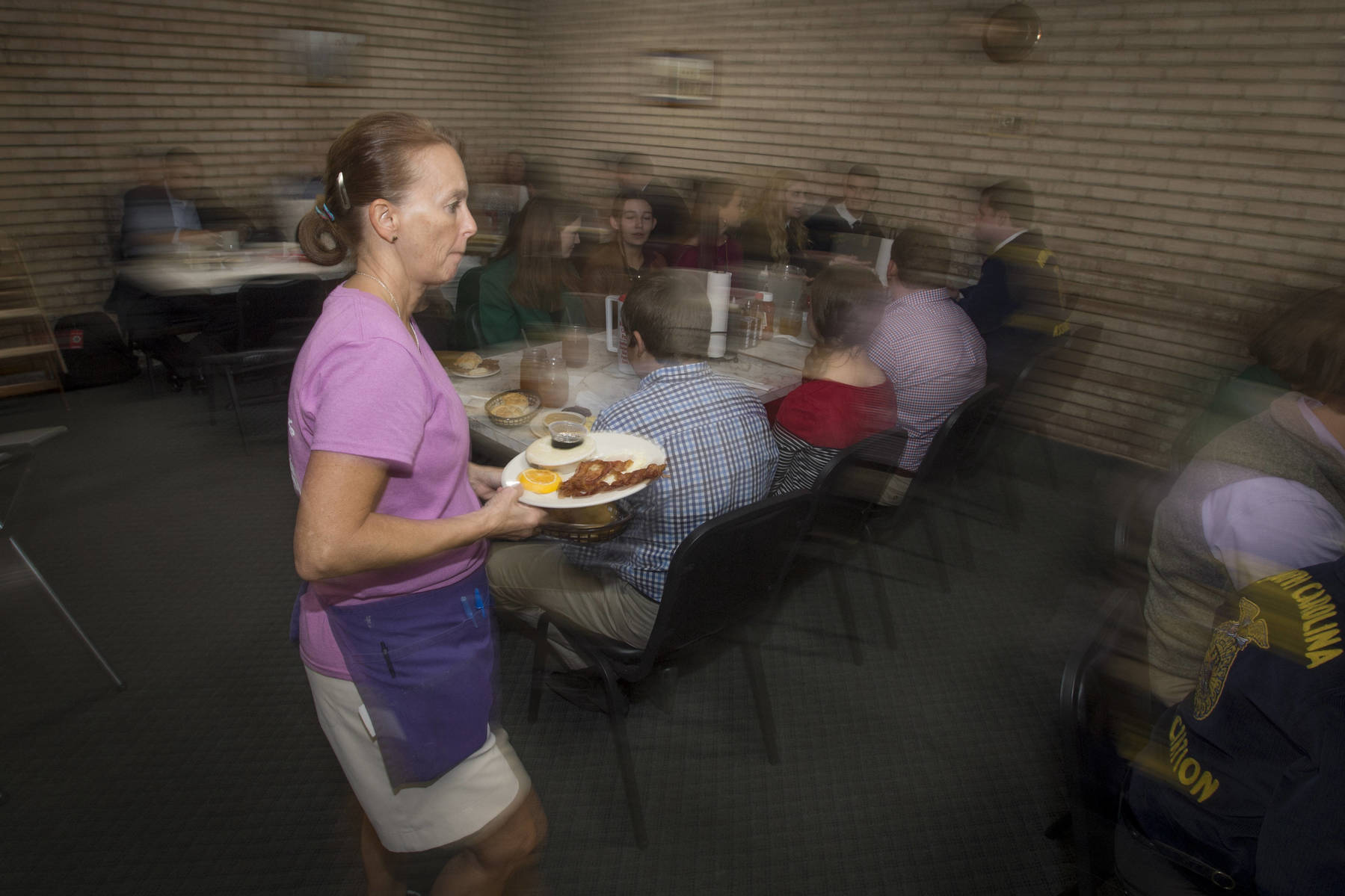 In Cleveland, two full-service restaurants are among the businesses with the most wage theft violations. Photo: USDA

When employers refuse to pay promised wages, pay less than the minimum wage, fail to pay for all hours worked, or don’t pay overtime compensation as required by law, it is theft. They’ve stolen that worker’s time and their wages. Wage theft also includes other payroll fraud, like misclassification or paying workers under the table.

In Ohio, a person who steals $2,800 can be charged with a felony and could spend up to a year in prison. Employers found guilty of wage theft usually just pay back a portion of the stolen wages – not even the whole amount. Though the law says victims can receive up to three times the amount their employer stole, the state focuses on bringing the employer back into compliance rather than making the workers whole.

According to the US Department of Labor, 371 Cleveland companies were investigated by the agency due to claims of violation of the Fair Labor Standards Act (FLSA) between 2004 and 2018. Of those, 270 were confirmed to have had at least one wage theft violation—that’s a finding rate of 72.8%. Among these companies, there were found to be 6,417 counts of wage violations. The FLSA established minimum wage, overtime, and child labor standards.

This figure is likely a severe underestimate. These violations are only those that were claimed under the federal Fair Labor Standards Act and brought to the US Department of Labor for enforcement. As such, the total does not include any wage theft claims made at the Ohio wage and hour bureau or private actions. It also doesn’t include the even greater number of wage theft incidents that go unreported every year because workers fear retaliation, or lack information or resources to pursue a claim. Still, it paints a worrying picture of just how widespread wage theft violations are, and the data allows us to pinpoint which industries and companies the problem is concentrated in.

Table 1 shows the Cleveland industries with the highest frequencies of wage theft violations. The table includes the number of companies in a given industry with at least one confirmed FLSA violation from 2004-2018; for context, it also provides the average number of wage theft violations per case per industry and the industry’s average weekly wage. As shown in the table, one of the most common perpetrators of wage theft was care work: childcare centers came in first (32 of these establishments had at least one confirmed wage theft violation between 2004 and 2018), home healthcare (11 violations), and nursing homes (5 violations) also appeared. Coming in second and third place were two sectors of the food service industry—full-service restaurants (22 of which were violators) and limited-service/fast food restaurants (19 of which were violators); these sectors made up 8.2% and 7.0% of all cases, respectively. Several building trades appeared near the top of the list. Other top-offending industries included temp agencies, gas stations, dentists’ offices, and various health care services. 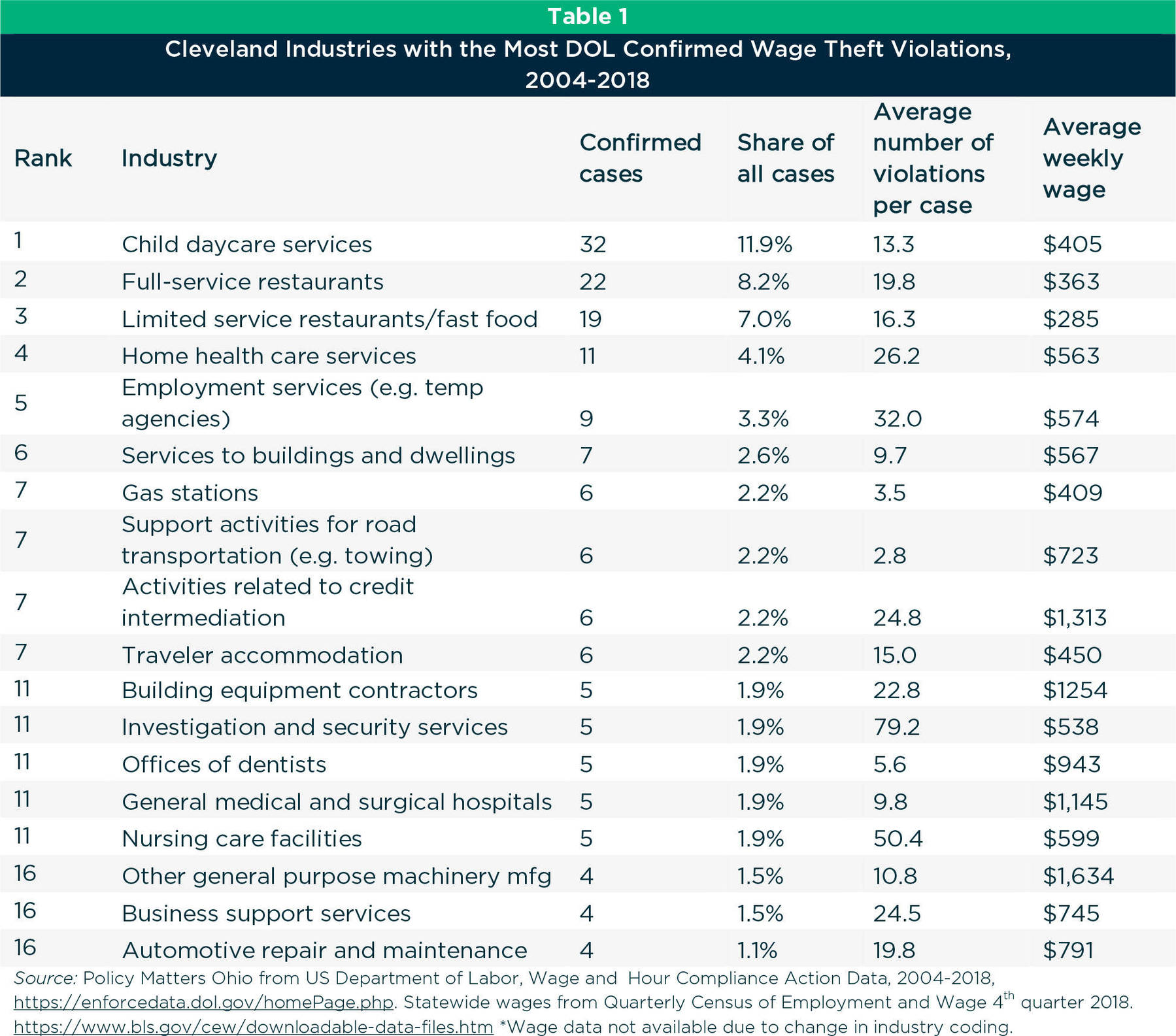 Wage theft in a given company is hardly isolated to one employee at one time—it usually affects either multiple employees or occurs multiple times. For child daycare centers, there were an average of 13.3 FLSA violations per case—in other words, there were (on average) more than 13 wage theft violations per offending establishment. For full-service restaurants, that number was 19.8.

Finally, Table 1 showcases a key correlation between wage theft and an industry’s average weekly wage—the most frequent wage thieves do business in the industries that pay the lowest. According to the Bureau of Labor Statistics, the average weekly wage in Ohio during the fourth quarter of 2018 was $1006.[3] All but one of the top 10 wage-thieving industries listed in Table 1 had an average weekly wage that fell below that. In fact, on average, employees in the top three offending industries (child daycare centers, full-service restaurants, and limited-service/fast food restaurants) didn’t make even half of what the average Ohioan did. Thus, the industries with the most companies stealing wages are the same industries where employees need those wages the most. 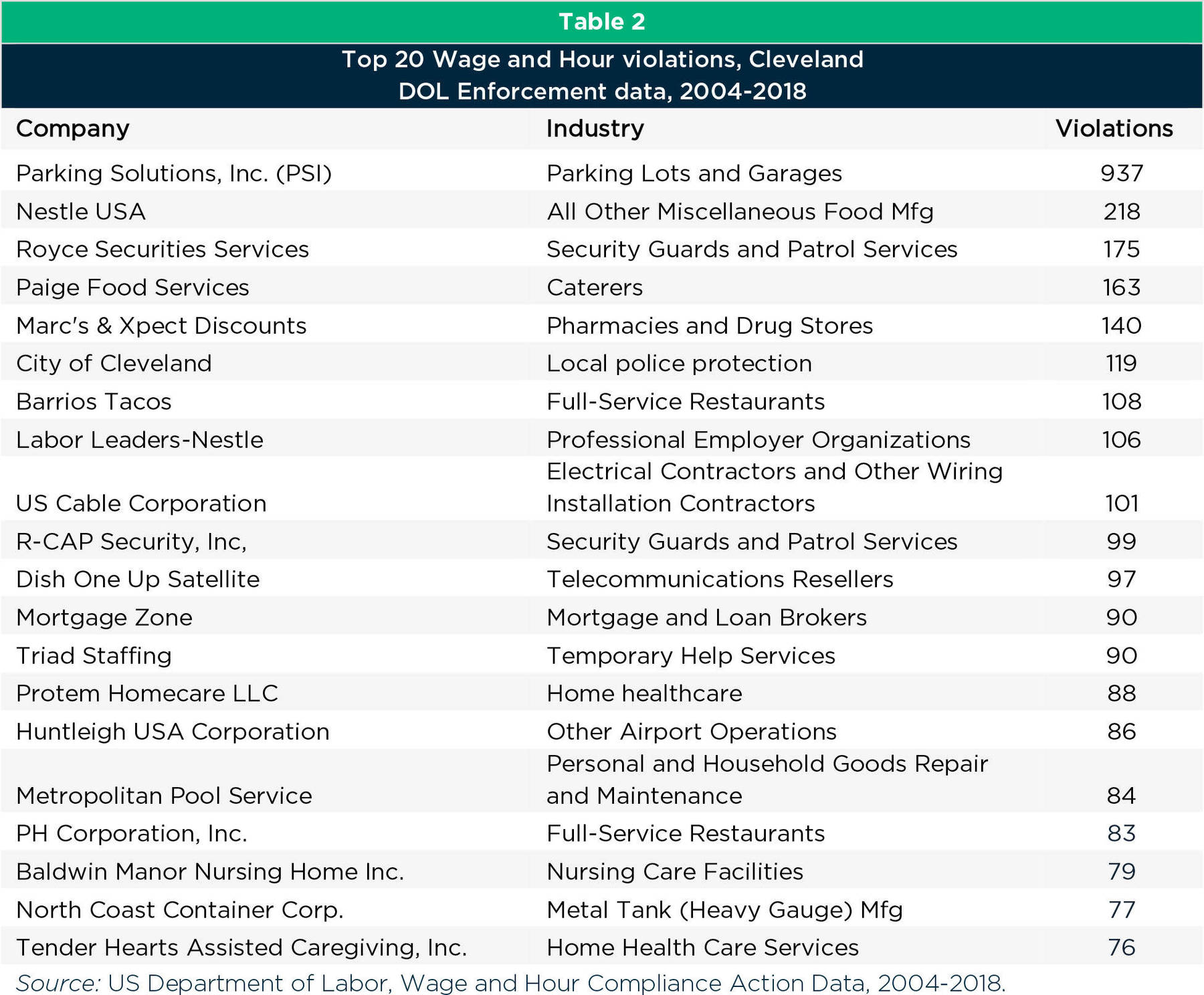 Tables 1 and 2 show that wage theft (and workforce violations in general) aren’t relegated to a few isolated incidents in a few select companies. Instead, they’ve posed a persistent problem in a wide variety of Cleveland businesses—as seen, at least 270 were confirmed to have stolen wages in the 14-year period investigated, and most of them had more than one confirmed incident of the practice. However, a few key Cleveland industries (such as child daycare services, full-service restaurants, and limited-service/fast food restaurants) tended to have the highest concentrations of companies stealing wages, indicating that regulation should be focused on these frequent offenders. Tighter regulations must be enforced in these areas—and frequent investigations need to be conducted on these corporations—if Cleveland’s working people are to get the wages they’re entitled to.

[2] Report of the Ohio Attorney General on Economic Impact of Misclassified Workers for State and Local Governments in Ohio, February 2009.

Investigating Wage Theft: A Survey of the States
November 11, 2010

Investigating Wage Theft: A Survey of the States
November 11, 2010