1/3: One-third of Cleveland’s $665 million General Revenue Fund (GRF) — which is funded by local taxes — goes toward the Cleveland Division of Police (CDP), the single largest allocation. That’s one of the many data points in Wendy Patton’s analysis of the Cleveland police budget. She does a deep dive into how the money is spent and how well the CDP has met its deliverables under a consent decree with the U.S. Department of Justice. 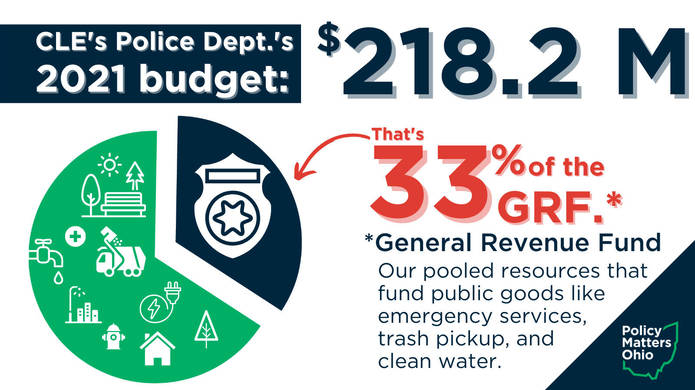 37%: Thirty-seven percent of the emergency calls that came into Cleveland dispatch are less likely to require an armed response, according to Piet van Lier’s companion piece that examines alternatives to traditional policing and community oversight. Piet looked at initiatives already being implemented in Cleveland as well as others around the country. Together, the papers make a compelling case for how some of Cleveland’s public resources that currently go toward policing could be allocated differently and more effectively.

31,300: Seasonally adjusted data from the Ohio Department of Job and Family Services (ODJFS) last week show Ohio employers added 31,300 jobs over the month. In his monthly JobWatch report, Michael Shields said those preliminary numbers could mark a restart to Ohio’s job recovery from the pandemic recession, which has been helped along by unprecedented federal stimulus, even in the face of some counterproductive policies at the state level.

45%: One of the hallmarks of that stimulus is an expanded childhood tax credit that will put more cash in the hands of families throughout the country. Studies show that the policy could cut the childhood poverty rate by nearly 45%. Will Petrik appeared on WVXU’s Cincinnati Edition to talk about what the cash infusion will mean to Ohio families and kids.

12.9%: Michael joined friends from the Northeast Ohio Worker Center and Service Employees International Union Local 1 for a City Club forum on essential work. One of the key data points he lifted up was that in Ohio, the “essential workers” who got us all through the COVID-19 pandemic are paid 12.9% less than other workers. Luckily we’re part of a group of folks working hard to make sure essential workers – and all working people – are given the respect they deserve. Members of the Northeast Ohio Worker Center met this week at Euclid Beach Park. 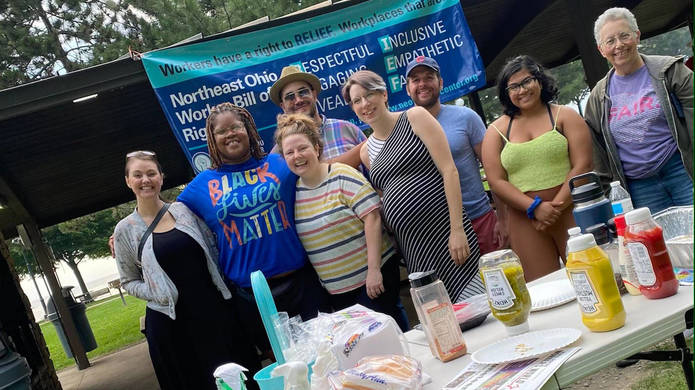 $1.7 billion: Lawmakers passed a state budget that gave away over $1.7 billion of public resources in tax cuts that will further enrich the wealthiest Ohioans, Wendy Patton wrote for cleveland.com. But thanks to Ohioans who got involved and held elected officials accountable, the budget had some important bright spots. Hannah Halbert gave a state budget rundown on a City Club of Cleveland forum.

260,000: The World Resources Institute found that providing federal funds to support clean energy, repairing damage from fossil fuel extraction, and replanting forests could support 260,000 rural jobs. Amanda Woodrum appeared on a panel to unveil WRI’s report and discuss how it aligns with her work for ReImagine Appalachia.

22 months: That’s the average time an Ohio family that needs help affording housing has to spend on the waiting list for a Housing Choice Voucher, according to our national partner, Center on Budget and Policy Priorities.