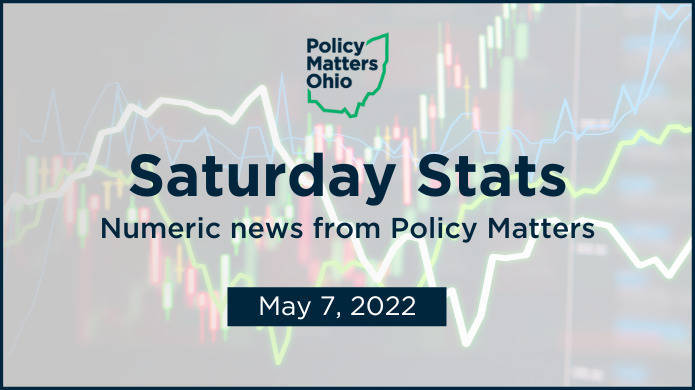 4 in 10: Last week we released a report written by Michael Shields which found that four of Ohio’s 10 most common jobs pay a typical worker such low wages that they wouldn’t be able to support a family of three without needing food assistance. The report also shows that pressures from the pandemic and intervention from the federal government pushed employers to increase pay for many people — but those increases are modest at best. Check out Michael’s first ever TikTok video on the report!

We also broke the data out by metro area so you can see how working people are faring in your community:

2 times: Research shows that economically disadvantaged students who are engaged in the arts are twice as likely to graduate college as their peers with no arts education. For Teacher Appreciation Week, Tanisha Pruitt, Ph.D., wrote a blog about the need for more public funding for arts education, and highlighted a few of Ohio’s exemplary arts educators on our Twitter, Facebook and Instagram accounts.

+1: We added one new member to our team and officially announced our new development director, Michelle Unangst last week. She brings 20 years of experience in supporting nonprofit organizations throughout Northeast Ohio and has already helped us better connect our internal systems to our mission and values.

10: Sen. Steve Huffman is proposing legislation that would repeal nearly all of the state income tax over the next 10 years. If it goes through, those cuts would further enrich the wealthiest Ohioans and could take billions of dollars from our schools, parks, libraries and more. Sign this petition from One Ohio Now and tell your elected representatives to oppose Senate Bill 327!

The email version of this newsletter incorrectly identified Sen. Matt Huffman as the sponsor of SB 327. The sponsor is Steve Huffman.

Like many Ohioans, we were deeply troubled by news that the U.S. Supreme Court appears poised to strip away our rights to bodily autonomy by overturning Roe v. Wade. On May 14, Planned Parenthood Advocates of Ohio is hosting rallies in Cleveland, Columbus and Cincinnati. See you there.

We believe the people know best what their communities need. In Cleveland, PB Cle is pushing city officials to give residents a direct say over spending a portion of the city’s COVID relief funds. On May 15 from 2:30 to 4:30 p.m. join us to see PB (participatory budgeting) in action. The group will meet at ThirdSpace Action Lab, 1464 East 105th Street, Cleveland, OH 44106. Register here.