JobWatch: After adding jobs in November, Ohio on track to recover destroyed jobs by 2023

JobWatch: After adding jobs in November, Ohio on track to recover destroyed jobs by 2023

The numbers: Seasonally adjusted data released today by the Ohio Department of Job and Family Services (ODJFS) show that Ohio employers added 12,200 jobs over the month, from a downwardly revised 5,378,900 in October to 5,391,100 in November. November job gains were smaller than in October or September but marked the third straight month of gains. These figures are from a survey of employers and preliminary numbers are subject to revision. Ohio employers have added 113,300 jobs so far this year. Over the last six months, Ohio has recovered jobs at a rate of 0.32% per month; this rate is about three-quarters as fast as the U.S. but marks significant progress over prior months. Ohio still has 218,800 fewer jobs than before COVID in February 2020 (-3.9%). 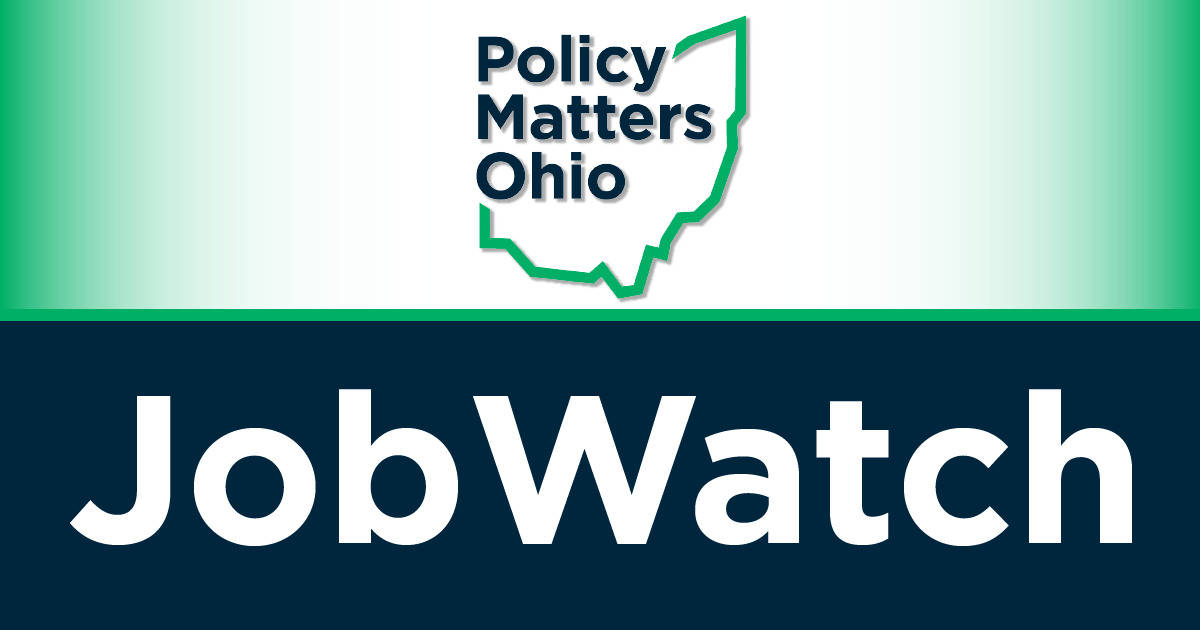 The household survey: According to the separate household survey, 11,000 Ohioans entered the workforce last month to accept a job or begin their search, and 23,000 job seekers found work. Ohio’s unemployment rate fell 0.3 points to 4.8%, just above the national rate of 4.2%.

The number of Ohioans reentering the workforce to accept or seek a job last month was the smallest since June 2021, which followed May’s massive reported reduction in combined job holders and job seekers of 216,000. Since June, an average of 21,800 additional people have re-entered the workforce each month. October was the second slowest month with a revised number of 12,000 new working or job-seeking Ohioans.

The details: Just four sectors have fully recovered jobs lost since the start of the COVID-19 recession. Transportation, warehousing and utilities employers have added 19,100 jobs (7.7%) since February 2020, and retail employers have added 3,000 jobs (0.5%). These gains reflect a change in buying habits and are consistent with the nation as people shifted consumption away from services to buy more goods and purchased many of them online. Construction jobs made small overall gains (up 200 jobs, 0.1%), and the federal government has now fully restored jobs but not added beyond that (0%).

Leisure and hospitality employers added 8,000 jobs last month, reducing the job shortfall in that industry to a still substantial 56,400 below pre-COVID February 2020. That left educational and health services — where employers cut 3,200 jobs — as the industry with the largest persistent shortfall (-56,800 jobs). As the pandemic ravaged Ohio, health care and social service jobs fell by 40,700, owing in part to burnout of overextended health care workers. The public sector has yet to restore 38,800 jobs, all of them in state (-16,800 jobs, down 9.4%) and local government (-22,000 jobs, down 4.1%).

“COVID took a toll on Ohioans of all backgrounds who have been kept out of work over ongoing health concerns, a lack of child care, or business closures. Some have been forced into early retirement,” said Policy Matters Ohio researcher, Michael Shields. “The decision by Gov. DeWine to prematurely end jobless benefits in June did nothing to address these issues. Failing to tackle them head on especially harmed women and working people of color who were more likely to be laid off during COVID-19. The rate at which Ohioans are returning to work or seeking jobs has slowed since August. The lesson learned is that robust unemployment compensation is a vital safeguard that should be strengthened and made more efficient for future crises.”

If Ohio’s current rate of recovery holds, the state will restore the losses around December 2022. This projection does not account for job growth we would have seen if not for COVID-19. By comparison, it took Ohio until May 2015 to restore the jobs lost in the Great Recession, a pace that left Ohio short of recovery accounting for population growth by the time COVID-19 arrived.

“Ohio is on track to recover jobs lost in less than half the time it took after the Great Recession, but only if policymakers keep directing public dollars to a shared recovery,” said Shields. “We owe this rapid progress to the unprecedented fiscal stimulus from the federal government. That includes scaled-up federal unemployment benefits that reached the low-paid and gig workers who are excluded from Ohio’s regular system. Those benefits allowed Ohioans displaced from work to keep spending on basic needs and keep revenues flowing to businesses. Public dollars were decisive in driving economic growth and job creation. Federal policymakers should take that lesson to heart and pass the Build Back Better Act.”