Race in the Heartland: Ohio in focus

Race in the Heartland: Ohio in focus

Racial disparities are national problems and national challenges, but Ohio and the Midwest face particular struggles with these issues because of our policy and economic history. More black Americans live in the Midwest than in either the Northeast or the West and many black families built middle class lives for themselves in Ohio’s unionized manufacturing economy during the 20thcentury. But segregation, unequal economic opportunity, and loss of unionized jobs have made Ohio and the Midwest places where racial inequality is particularly urgent. Persistent housing segregation coupled with the unequal racial implications of deindustrialization and de-unionization in the late 20thcentury combined to create and sustain stark racial boundaries.

Public schools have provided education, economic opportunity, and a better life to generations of American children. Unfortunately, schools do not treat black and white children equally and the schools available to black and white students often differ in quality. A combination of poverty, segregation, parental education disparities, lack of black teachers, and lower-quality schools in poor communities lead to a 41-point differences in scores on the National Assessment of Educational Progress eighth-grade assessment of proficiency in math.

Ohio schools suspend a higher share of black students than schools nationally, a worse disparity than in the majority of states. High rates of suspension undermine future academic and financial success and help feed the school-to-prison pipeline.

Ohio set up a system of universities and community colleges that dramatically increased the education levels of our citizenry. But the state has not kept higher education affordable and has provided access at very different levels to black and white students. Ohio falls short of the nation in BA attainment for both black and white students, but the racial gap in BA attainment is higher nationally (13.9%) than in Ohio (11.8%). The table on the next page provides details on how education is delivered inequitably in Ohio. 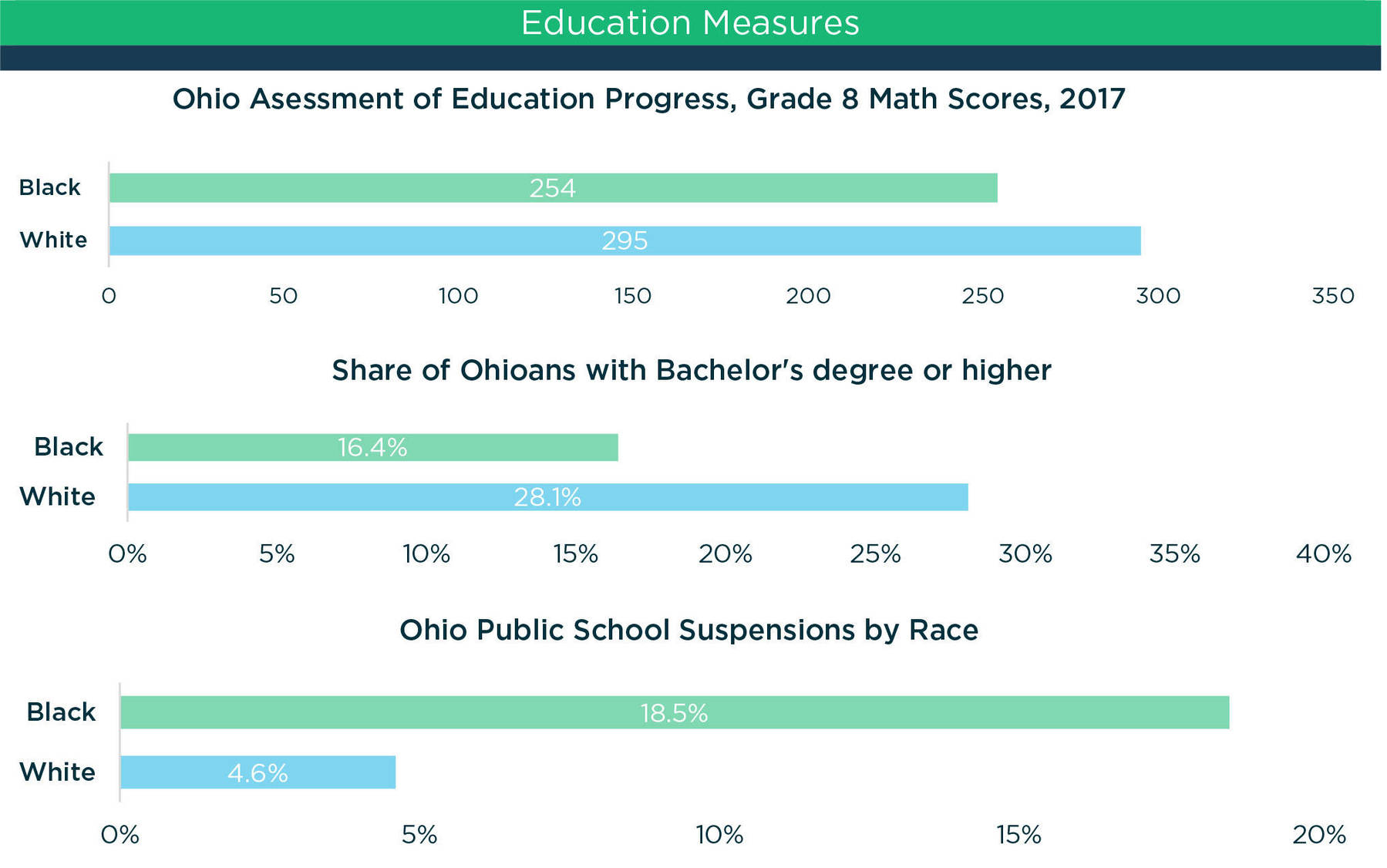 Jobs and the economy

Good jobs and a set of strong public policies in the twentieth century led to large increases in income and well-being for black and white workers in Ohio, the Midwest, and the nation. More recently, inequality has increased and racial wage gaps have grown in Ohio in particular.

Discrimination, occupational segregation, and the racially disproportionate impact of deindustrialization and de-unionization contribute to big gaps in job outcomes between black and white workers in Ohio and the Midwest. Both white and black Ohioans are less likely to be employed and more likely to be unemployed than workers of their racial group nationally. Ohio’s Employment-to-Population racial gap is the 5thlargest in country. Ohio also had the 5thlargest racial gap in unemployment in the fourth quarter of 2017. Unemployment rates have improved since then.

The consequence of such a large gap is not only the cost of not working, but the scar effects of unemployment, including disengagement from the labor market, lower chances of re-employment, long-term earning loss, and physical and psychological harm to unemployed people and their families.

In 2018, Midwest employers paid the median black worker 75% of what they paid the median white worker. Ohio has the nation’s 9thlargest race wage gap, particularly painful because it has grown so much since the late 1970s when unionized manufacturing jobs were more plentiful. Since 2016, Ohio has prohibited its cities and counties from raising local minimum wages above Ohio’s state minimum wage.

In Ohio both white and black poverty rates exceed the national average. More than a quarter of poor black Ohioans live in high-poverty neighborhoods. In Cleveland and Dayton, concentrated poverty among black people exceeds 40%. In places of concentrated poverty, the insecurity of poverty is amplified by poor quality of local public goods, public services, and economic opportunities.

The Midwest’s region’s deep and continual segregation leads to racial isolation and concentration. Mortgage and home insurance “redlining,” uneven access to credit, and deregulated predatory home loans worse these patterns. Cleveland is considered the 5thmost segregated metro area in the country, with the Cincinnati, Youngstown, Dayton, and Toledo areas all listed in the top 20. Disparities in homeownership are not only reflective of economic disadvantage and discrimination, but serve as a mechanism for creating and sustaining wide disparities in wealth. Ohio falls in the middle of the distribution for the national ratio between white and black homeownership. 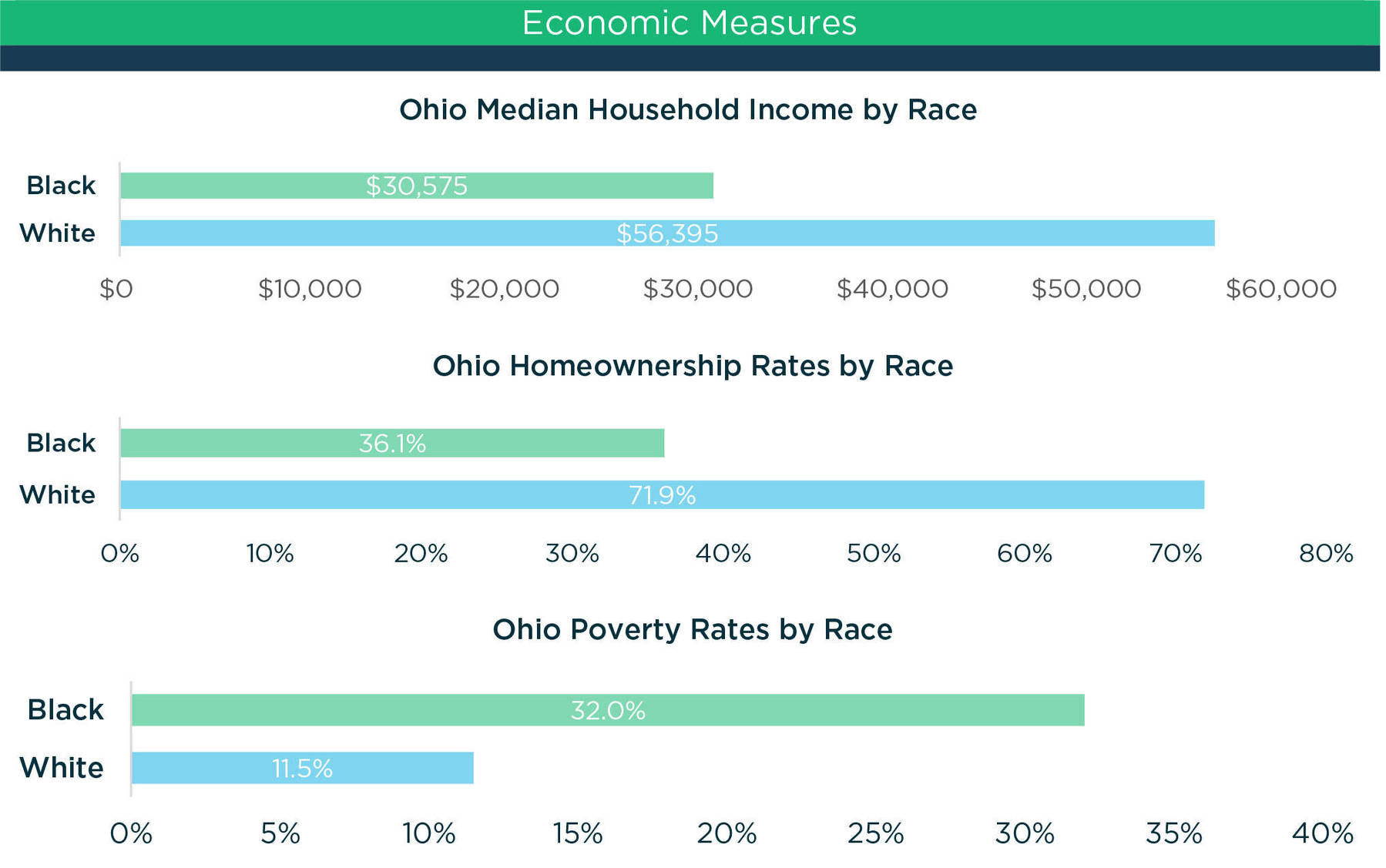 The prison system disproportionately incarcerates black Americans. The median incarceration rate for black adults in state prisons is 1,445 per 100,000. Ohio incarcerates 1,625 of every 100,000 adults, a higher share than the typical state. Incarceration hurts those in prison, but it also harms their families and communities. It limits future education, employment and housing opportunities in lasting ways.

Poor neighborhoods are marked by family poverty, as well as broader community conditions such as lower-quality air, water, housing, schools and playgrounds, and less access to healthy food. Poor neighborhoods have weaker educational and employment opportunities.

The racial wealth gap is both a consequence of historical disadvantage and discrimination, and an intense source of disadvantage in its own right. Wealth itself is a key determinant of economic security, opportunity, and mobility. Therefore, the persistent and vast racial wealth gap, has enormous impacts on quality of life in the present and the future. Nationally, black families on average have barely 10% of the wealth that white families have.

Improvements in immunization, public health, medical technology and safety nets led to tremendous improvements in infant well-being over the 20thcentury. Both black and white babies are much more likely to survive through their first year of life than they used to be. U.S. infant mortality – the share of babies who don’t make it to their first birthday – plunged from above 80 of 1,000 black babies and above 50 of 1,000 white babies in 1935 to 12.4 and 5.3 of 1,000 babies respectively by 2007. Still, by even this earliest measure of well-being we see sad disparities. Black babies were more than twice as likely to die before their first birthdays compared to white babies nationally in 2016. In Ohio that year, black babies were more than 2.5 times less likely to live to their first birthday.

Addressing the disparities discussed above requires voters of color be politically visible and fully incorporated into the political process. Historical and current systems of disenfranchisement lead to lower rates of voting turnout for black communities. Since 2013, the Ohio legislature has passed initiatives to purge the voter rolls, curb voter registration, and limit early or absentee voting. Unlike many states, Ohio allows formerly incarcerated individuals to vote after they’ve served their time, which improves the state’s relative ranking on ability to participate in our democracy.

This brief is an Ohio summary, written largely from research done by Professor Colin Gordon of the University of Iowa for the longer study, Race in the Heartland: Equity, Opportunity and Public Policy in the Midwest. That full report contains all citations and sourcing for findings presented here. This Ohio brief reflects the work of Amy Hanauer, Emma Schubert, and Zane Steiber, all of Policy Matters Ohio.

Celebrate Juneteenth by continuing to fight for racial justice
June 19, 2019

Celebrate Juneteenth by continuing to fight for racial justice
June 19, 2019