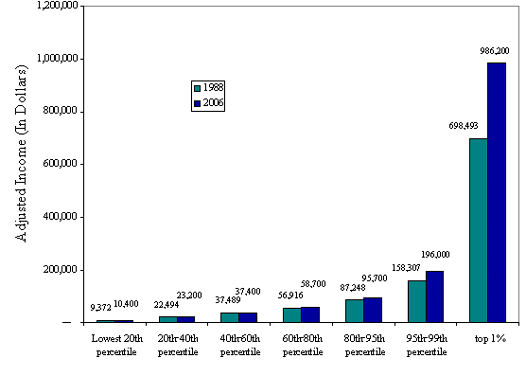 The State of Working Ohio 2007 uses the best data available to document issues facing Ohio workers. The report found staggering increases in inequality; low job growth; rising productivity, hours and education; slight wage increases; modest progress on disparities; and slight unemployment declines. The chart pictured here is a highlight from the report, showing that over the last 18 years, households in the bottom 60 percent saw few real income gains while those in the 95th to 99th percentile posted nearly a 24 percent ($40,000) increase in annual income. The top one percent's income spiked more than 40 percent, from $698,000 in 1988 to $986,000 in 2006, rising more than seven percent just between 2005 and 2006. They earned over 26 times what middle-income households earned in 2006. The report concludes with recommendations to innovate in five areas where other states have bypassed us: investing in the future, creating more opportunity, constructing on-ramps to the middle class, building and protecting people's assets and retaining strong public structures.

We are grateful to the Joyce Foundation for the funding that underwrites this project and to the New World, Sisters of Charity, Cleveland, and Gund Foundations for other support.