Ohio’s wealthiest pull further away from the rest of us

Ohio’s wealthiest 1 percent of households took home 15.8 percent of all earned income in the state in 2015. That is more than twice the share captured by the top percentile in 1974, and within five percentage points of the share they held just before the onset of the Great Depression. 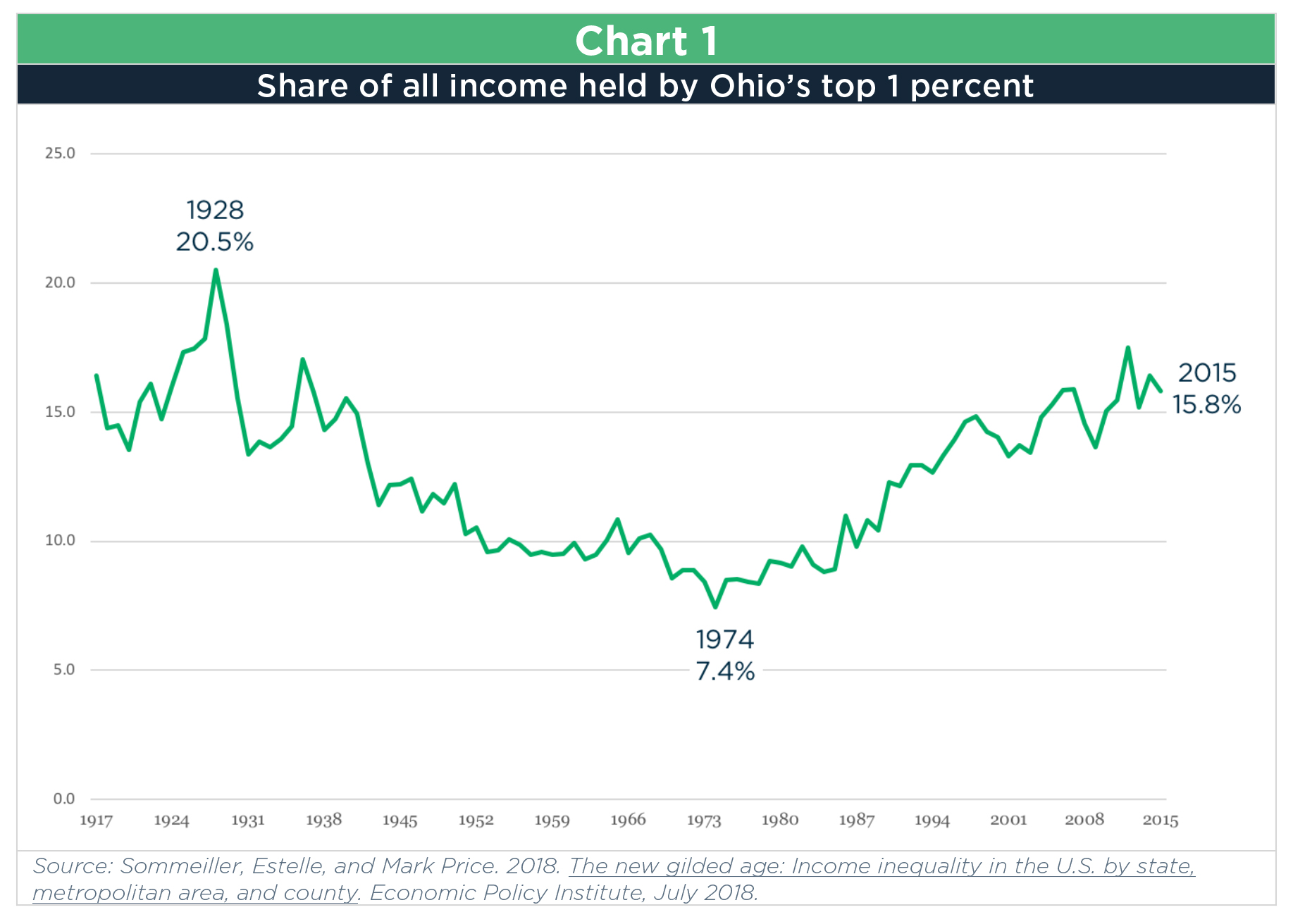 These are among the findings of a new study published by the Economic Policy Institute. In “The new gilded age: Income inequality in the U.S. by state, metropolitan area, and county,” Estelle Sommelier and Mark Price illustrate changes in income inequality since 1917.

The report, which is based on pre-tax income and excludes Social Security payments and other transfers, finds income inequality has risen in Ohio since the 1970s, as it has in every other state. The current level of income inequality stands in contrast to the mid-20th century’s more shared prosperity. Between 1945 and 1973, the wealthiest 1 percent of Ohio households captured about 4 percent of total income growth. Compare that to the explosion in top-tier wealth between 1973 and 2015: During that period, Ohio’s wealthiest seized a whopping 86 percent of all income growth. 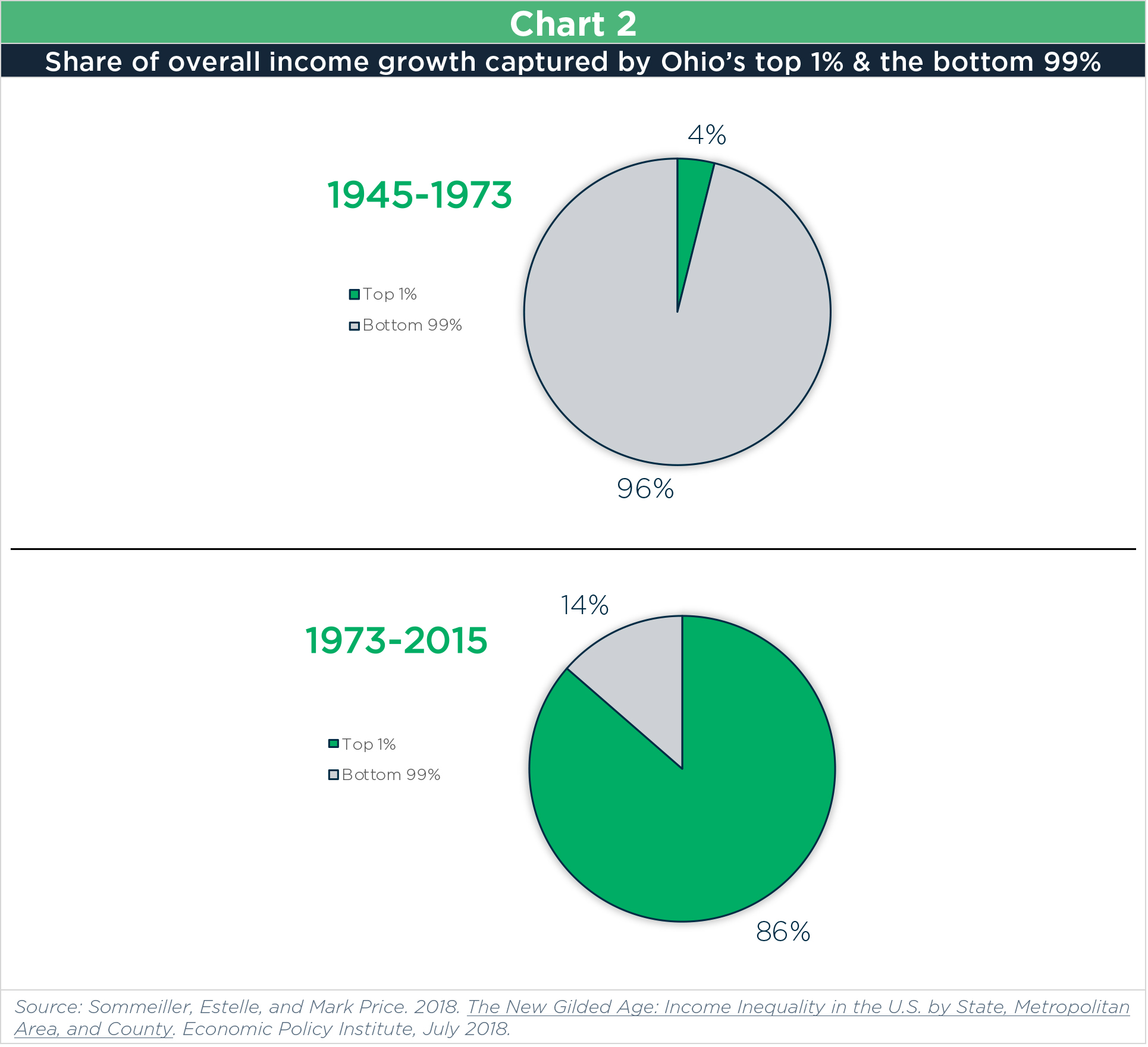 Sommelier and Price find that since 1973, Ohio’s average household income has grown by 10 percent, when adjusting for inflation. However, this growth has been captured exclusively by the wealthiest 10 percent of households. For the remaining 90 percent, annual income has in fact fallen by 8%. 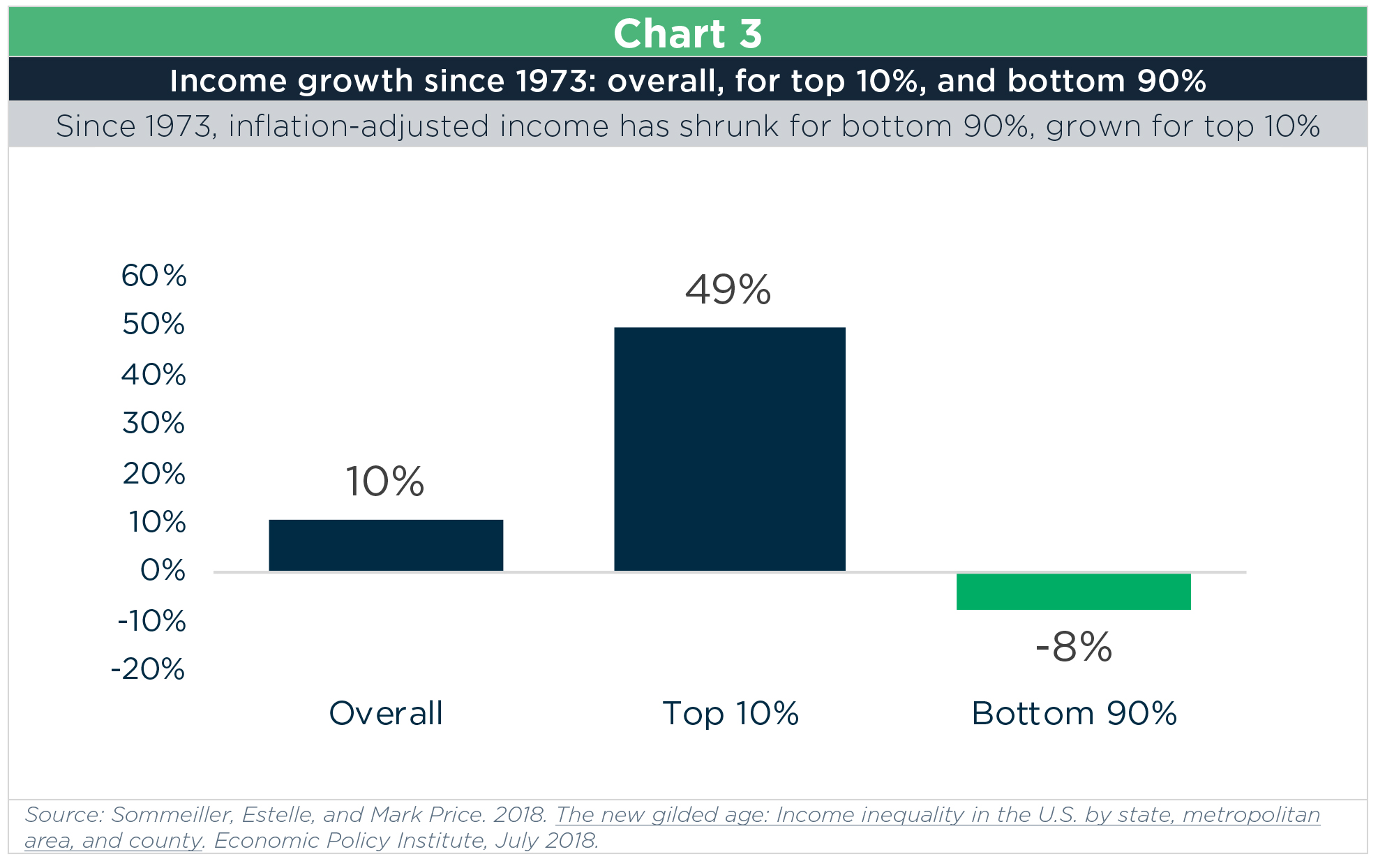 Cleveland-Elyria had the greatest discrepancy among Ohio’s metropolitan areas: the wealthiest 1 percent out-earned the average of all other households by a factor of 21.5. That’s more than $1 million of annual income to the top tier, and an average of less than $50,000 for the remaining households.

While these figures are troubling, income inequality is worse for the nation as a whole: Ohio ranks 29th out of the 50 states and the District of Columbia in terms of the discrepancy between income of the top 1percent and the bottom 99 percent. None of Ohio’s 88 counties break the top 100 most unequal in the nation; Hamilton County is number 104. Likewise, none of Ohio’s metro areas are among the very worst; Cleveland-Elyria ranks 114. Indeed, Ohio’s wealthiest earn considerably less in annual income than the national average among their extremely wealthy peers. Whereas the national average income for the top 1 percent was approximately $1.15 million in 2015, Ohio’s top tier earned $858,965.

Everyone else in Ohio—the remaining 99 percent of households—averaged just over $46,000.

Income inequality is a problem across the United States. While it is more dramatic in some places—in New York, Connecticut and Florida, the top 1 percent outpace the remaining 99 percent by more than 35 to 1—it is a fact of life in every state, including Ohio.

But it doesn’t have to be. In the middle of the last century, income inequality fell steadily while union membership, the minimum wage, and public investments rose. We can and should implement progressive economic policies to protect worker rights, establish a living wage, and more equitably share the wealth we create.

Ohio’s wealthiest pull further away from the rest of us