Good afternoon President Kohler, Vice President McGuire and honorable members of the State Board of Education. Thank you for the opportunity to testify on the need for the Fair School Funding Plan. My comments focus on the long-term inequity in state funding for primary and secondary education in Ohio.

The Ohio Supreme Court found Ohio’s school funding system unconstitutional in 1997. Because school funding is based largely on local property tax, it advantages wealthier districts with higher property values. Most of the state’s hundreds of school districts joined a famous lawsuit, DeRolf v. the State of Ohio, filed in 1991; the inequitable funding has not been fixed yet. 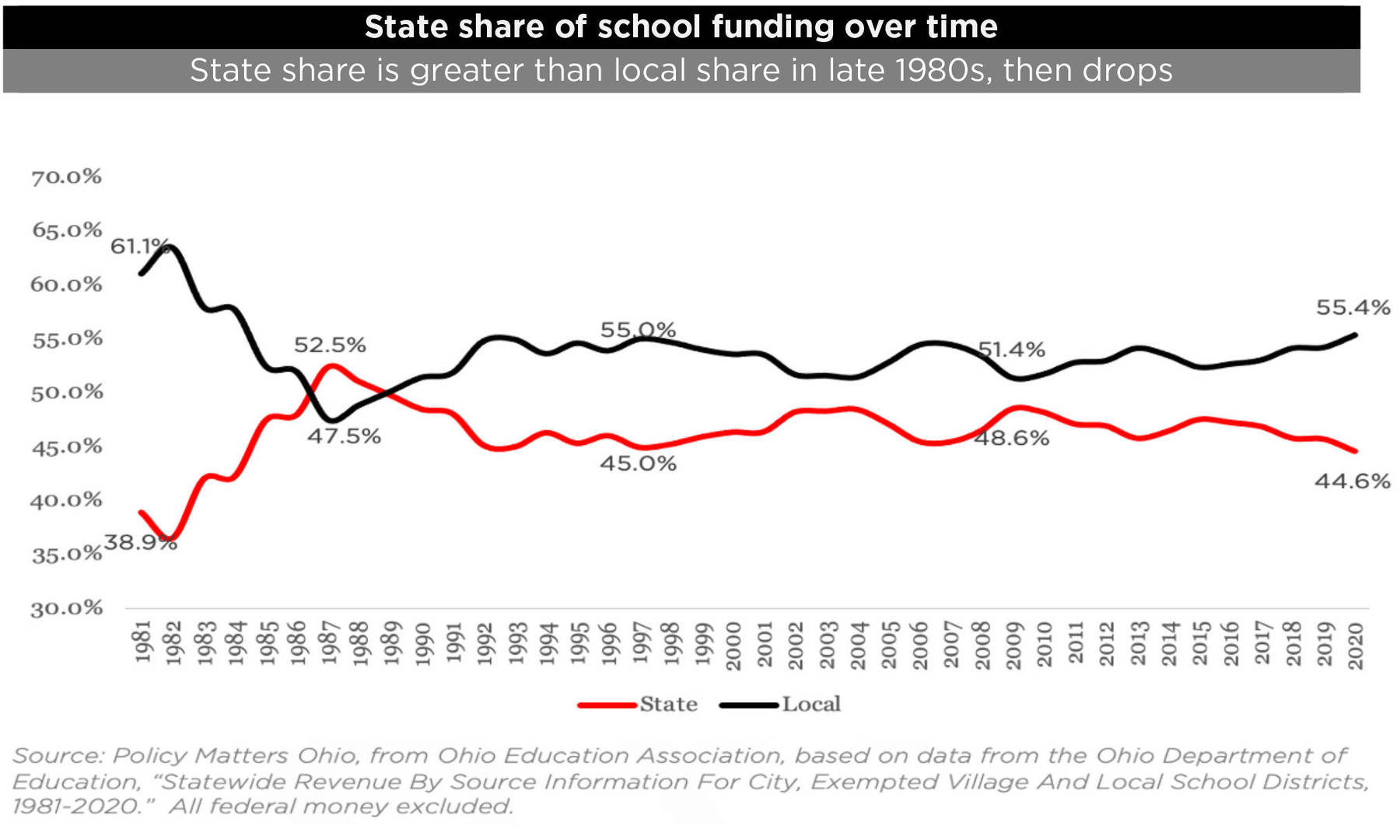 The chart above shows that the state provided slightly more than half of the funding for Ohio schools, on average, in 1987, but since then local dollars have paid for the greater part of funding. The gap narrowed after 1997 and as the school funding issue was debated in appeals court but progress was halted by House Bill 66, the budget bill for 2006-07, which eliminated major business taxes and started phasing in big state income tax cuts. Gov. Ted Strickland narrowed the gap over his 4 year term (and used federal stimulus funds – not shown on this chart, to close the gap). But Gov. John Kasich promptly reversed that effort with a $1.8B cut to school funding imposed over the two-year budget of 2012-13. School funding has lagged ever since. By 2020, the state share of school funding had fallen to its lowest point since 1985.

Lawmakers have allowed state funding for Ohio’s public schools to rise and fall over time, adjusted for inflation. They also changed the formula for granting state aid four times over the past dozen years.[1] Uncertainty in state aid made planning and staffing hard for districts. A Policy Matters Ohio survey of school districts in 2015 found districts boosted budget reserves instead of restoring services even when economic conditions improved. One survey respondent stated: “The inability to provide a sound forecast past the current biennium budget is a very poor way to conduct business, yet that is the way we must operate in public schools.”[2] 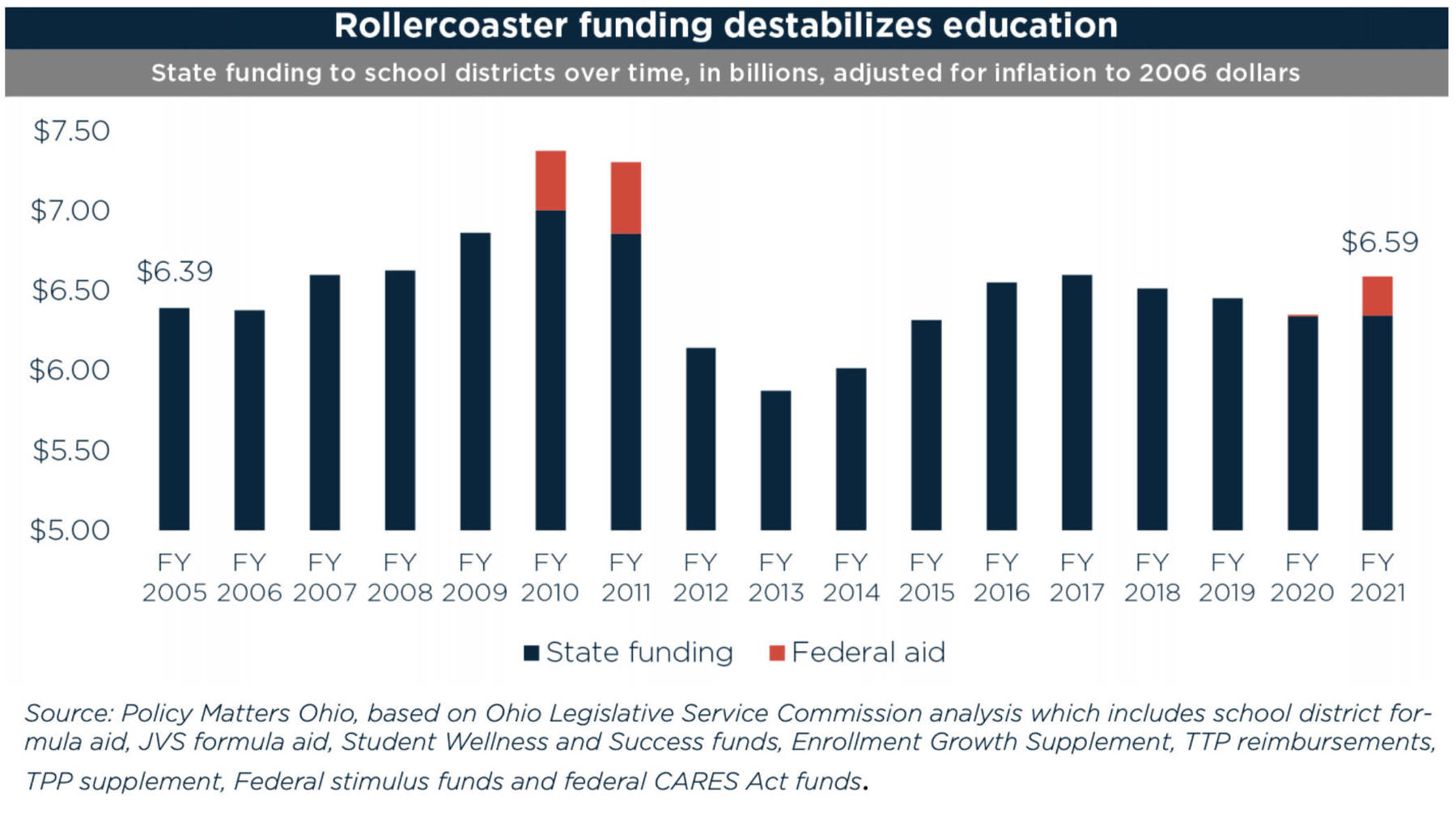 Poverty affects children’s ability to learn, and concentrated poverty makes it worse.[3] In the first years following the Supreme Court finding, educators persuaded the legislature to provide extra funding for students experiencing poverty. But over time the number of “economically disadvantaged” students in Ohio rose but funding did not keep pace. 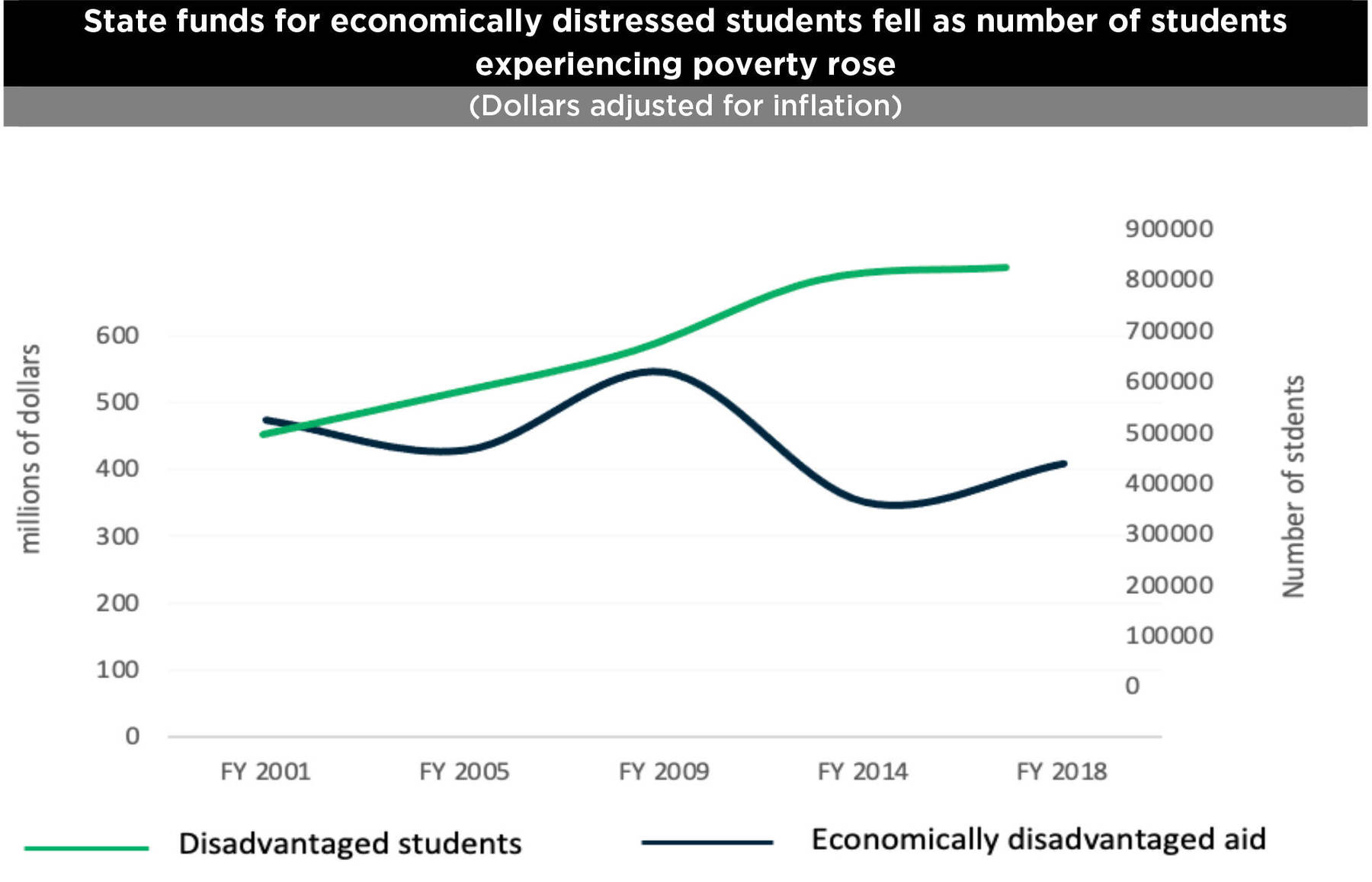 As lawmakers failed to boost investment in public schools, residents in many places tried to maintain school quality by voting for property tax increases, but local collections faltered. The problem was especially prevalent in schools with a majority of Black and brown students — a consequence of the insidious effect of racism, embedded in housing and lending policies, employment practices and many other public policies that forced many people of color into under-resourced, segregated communities.

In some communities, both state and local dollars go to charter schools, called community schools under Ohio law. The figure below shows how much charters cost the Columbus city school district. Columbus received $4,815 per student in the 2018-19 school year in state formula funding, but the district had to provide an average of $8,305 per student in the 2018-19 school year to students at charter schools. In other words, for every charter student, Columbus must provide $3,489 more than it receives from the state. The state dollars do not cover those extra funds. 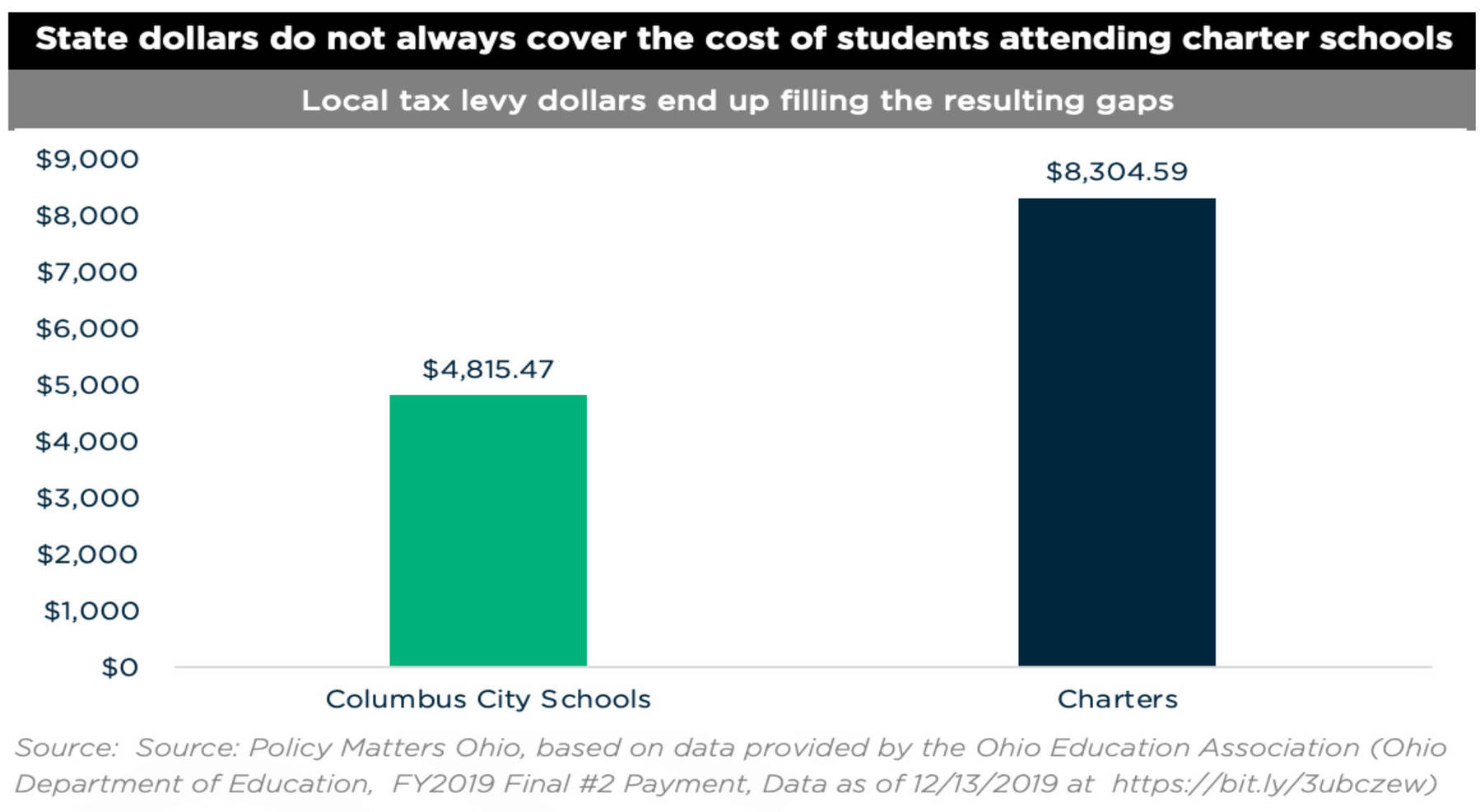 A plan to fix the system is on the horizon. Teachers, education administrators and school board officials worked over the past three years to develop a fix for Ohio’s broken system of school funding. Together, they developed the “Fair School Funding Plan,” now under consideration as House Bill 1 in the Ohio General Assembly.

The Fair School Funding Plan would base state funding on the cost of educating a student in each district.[4] It would separate charter and voucher funding from the state’s formula funding system. This will eliminate the diversion of local tax dollars from local school district budgets. Charter and voucher programs would continue to be funded through a separate line item in the state budget.

The Fair School Funding Plan is based on the actual cost of education and ends what has been essentially a zero-sum game. It would help all public schools by boosting the average state per-pupil aid from $6,835 to $8,459, and the amount of state funding any one district receives would no longer be connected to changing circumstances in other districts. A predictable formula would create stability and certainty in planning and hiring. The funding for economically disadvantaged students would increase from $272 to $422 per student, and a study would be done to calibrate funding for students whose families have low incomes. This will help students experiencing poverty and give needed resources to schools that serve communities where poverty is concentrated. While all schools will get a boost in resources, the greatest increase in state aid will go to districts where poverty is high and the cost of educating students is the greatest.[5]

The Fair Schools Funding Plan would start to correct the structural racial discrimination in Ohio’s school funding policy. Schools with many Black, and brown students would receive a boost in per-pupil funding that can help build a better future for those students. 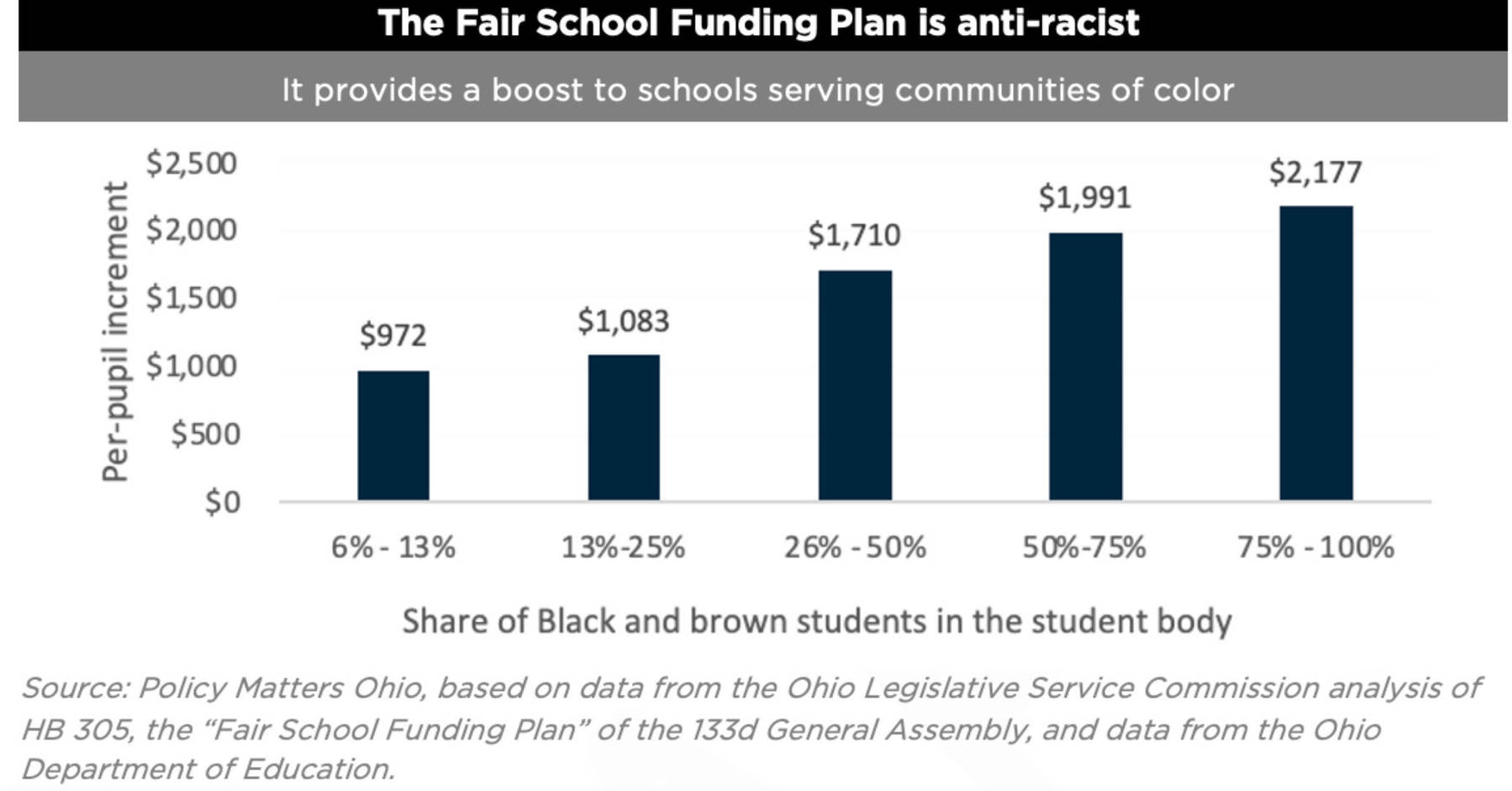 State legislators must pass and fund the Fair Schools Funding Plan with enough resources to sustain Ohio’s public schools. The Fair School Funding Plan may be phased in over time, but there is no time to be lost in getting a better state formula in place.

[1] A school funding formula in place in 2007 was replaced by the Strickland Administration with the “Evidence Based Model,’ which was dropped for a new formula under the next governor, John Kasich. Governor DeWine has simply frozen school funding at 2019 levels, not using any formula at all.