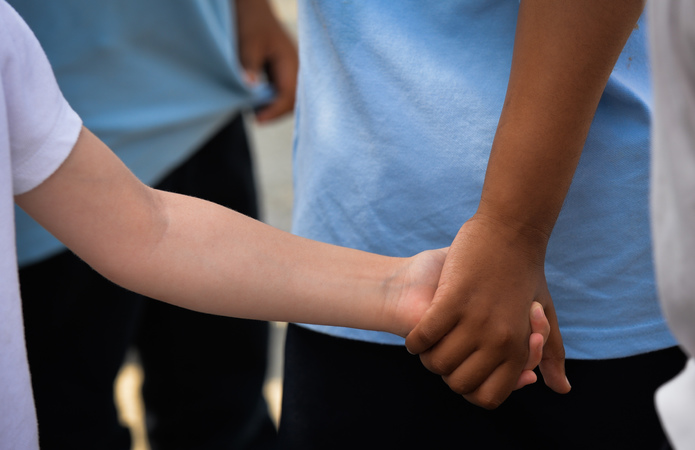 Now is the time to invest in Ohio’s children

Now is the time to invest in Ohio’s children

State investment through the General Revenue Fund (GRF) has fallen slightly, adjusted for inflation, over the past 10 years. Policymakers sent increased tax revenues from economic recovery to income tax cuts; to tax breaks for special interests, which increased by 18.5 percent (inflation-adjusted) since 2011, and to the state rainy day fund. Restoring state funding for services cut deeply in the recession is a harder job now because revenue sources have been cut and unappropriated funds stashed away for future use.

This report looks at children’s services in which state GRF dollars have fallen. Ohio funds less than a third of public child care aid with state dollars, and restricts eligibility: only one state has a lower income eligibility.[1] Home visiting programs for pregnant women and mothers can reduce infant mortality – a serious concern in Ohio, with high infant mortality rates - but less than 5 percent of Ohio’s eligible families benefitted from this service in 2016.[2] State aid to county human service agencies has fallen, even as state revenue sharing for county operations has been slashed and tax reimbursements to human service levies phased out, stretching local social service resources and staffing in meeting needs.

Lawmakers have an opportunity to do better for Ohio families in the upcoming budget. Governor DeWine’s campaign platform included raising income eligibility for the public child care program to help more working families and increasing the number of pregnant women or mothers benefited through home visiting.[3] This is a good place to start, but many more eroded services should be restored.

High-quality early childhood education has life-long benefits for children, like higher rates of graduation and better wages. It has also been found to reduce interaction with the criminal justice system and social welfare spending.[4] As a state program, it addresses needs of two generations, providing children with a good foundation for life and allowing parents in low-paid jobs to continue to work.

In the current two-year budget, funding for the state’s primary public child care program is anticipated to increase (assuming estimates for 2019 prove true).[5] Over time, however, state and federal funding has dropped. The problem is the long-term trend. Between 2011 and 2018, state and federal dollars invested in the public child care program dropped by $83.1 million, an overall decline of 10.3 percent (Chart 1). 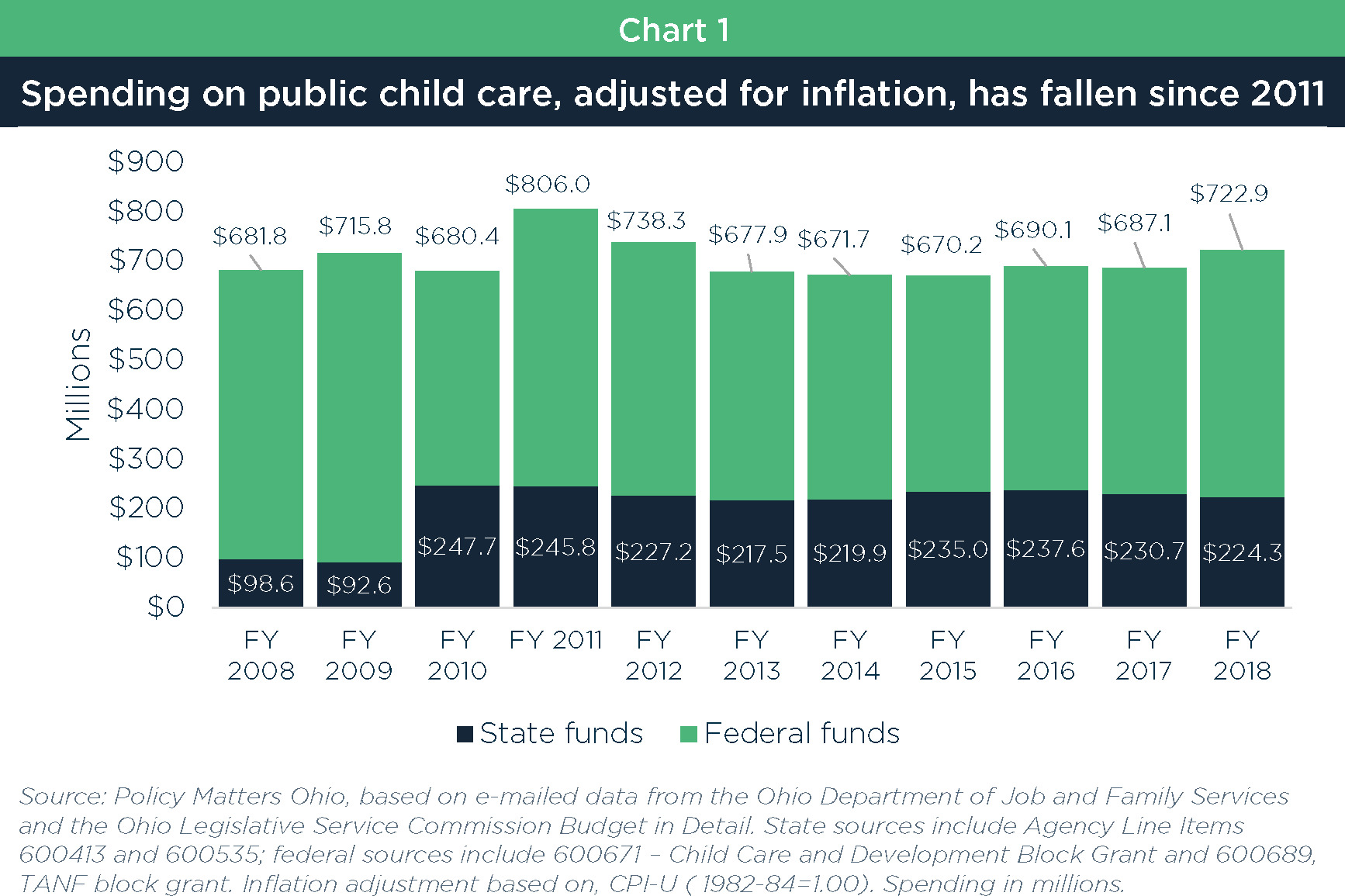 Only one state (Indiana) makes it harder to get public child care aid. Families that make more than 130 percent of poverty cannot be accepted into Ohio’s program (although those who get in at or below that very low level of income may stay in as their income rises.) Adjusted for inflation, the level of income for initial eligibility is lower today – at $27,024 for a family of three – than in 2009, when a family of three could make $37,611 in 2018 dollars.

State payments to child care providers who serve the program are so far below the market level that many preschools will not participate. The low market rates can hurt quality. The state has developed quality standards, but fewer providers are meeting those standards than anticipated because rates are too low to support required upgrades.[6]

Ohio’s economy is producing low wage jobs: six of the state’s 10 largest occupational groups leave a family of three eligible for, and needing, public aid.[7] Work supports like child care are essential to families. After years of inadequate support, the cost of program improvement to meet need will be high.

Home visiting is a voluntary program designed to help pregnant women and mothers. A nurse, social worker or community health worker visits the homes of vulnerable families (typically once a month) starting while the mother is still pregnant and continuing through the first few years of the child’s life. It has been found to be an effective way of reducing infant mortality[8] – babies not making it to their first birthday – a serious problem in Ohio.

Ohio’s overall infant mortality rate of 7.2 deaths per 1,000 live births is 20 percent higher than the national objective of 6.0. Ohio’s record is particularly shameful for black babies – second highest in the nation[9] at 15.6 per 1,000, almost three times as high as the 5.2 per 1,000 of white babies that don’t survive to their first birthday.[10]

State funding for this service is anticipated to rise by about 1.2 percentage points over the expected rate of inflation in the current, two-year budget for 2018-19 compared to the prior, two-year budget (expenditures are estimated for 2019). This is a tiny step in the right direction. Over time, however, outright and inflation-related cuts to “Help Me Grow” have been significant. Adjusted for inflation, the program has lost $18 million since 2006 across four budget lines (Chart 2). Funding rose in 2014 but fell by $5.6 million by 2018, adjusted for inflation, a drop of 17 percent. 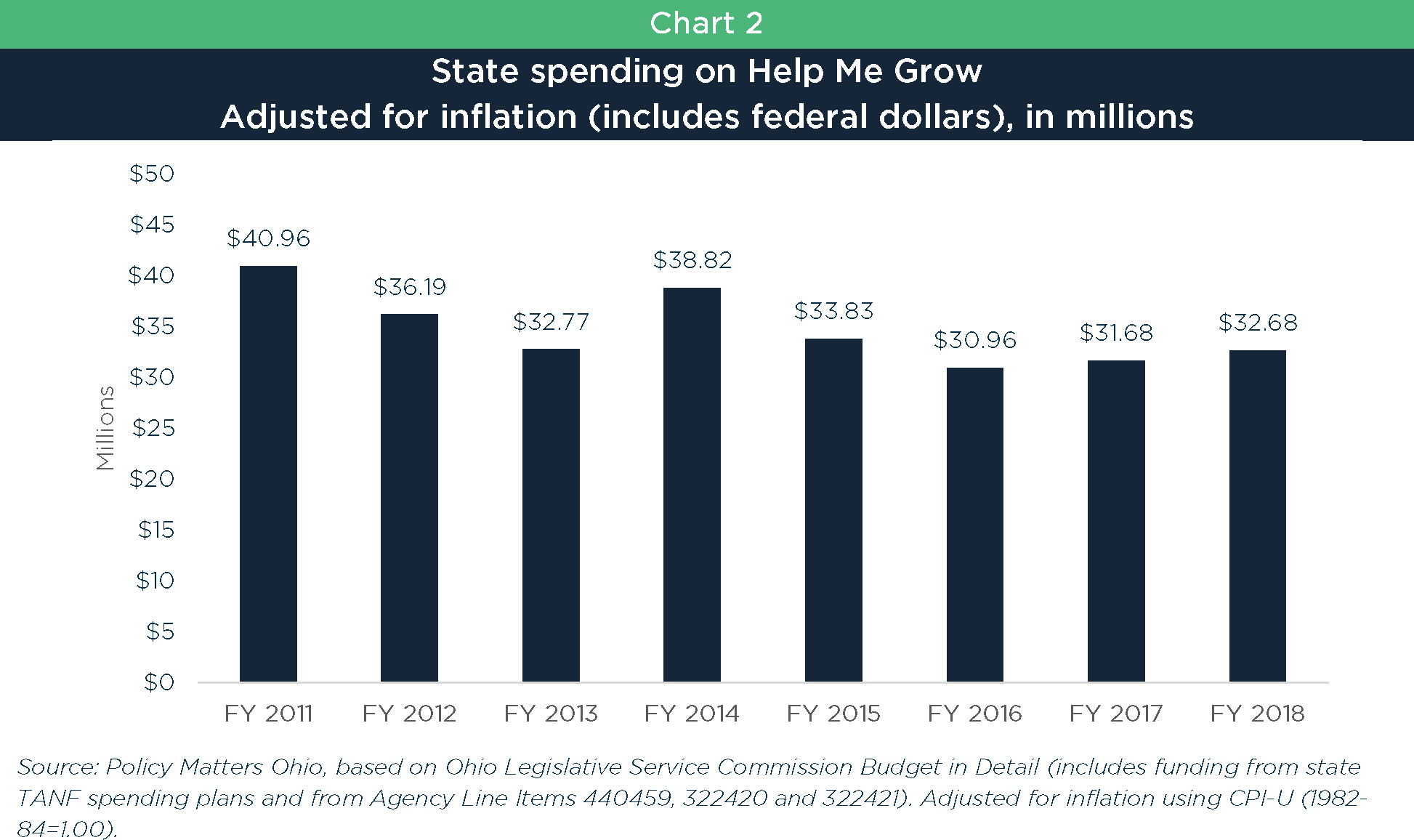 Governor DeWine’s campaign promise to triple home visiting is much needed. However, even tripled, the program will reach less than 15 percent of eligible families. This illustrates the difficulty of restoring eroded programs to the scale needed in Ohio.

Another program funded in part by TANF dollars supports families who take in children of relatives who may otherwise be placed within the foster care system. Grandparents, siblings, aunts and uncles take in young relatives whose parents are unable to care for them, a problem that has increased with the drug epidemic. About 100,000 grandparents are raising their grandchildren in Ohio right now and more than 7,100 children are supported by the state Kinship Permanency Incentive program.[13] An estimated 113,000 Ohio children are living with kin.[14] The program serves kinship caregivers with incomes up to 300 percent FPL and who have legal custody of a relative’s children. Funding for the Kinship Care Incentive Program has bounced up and down since 2011 (Chart 3) but has fallen since 2006 on an inflation-adjusted basis. Additional funds for kinship care child care were appropriated but remain mostly unused. A bill to boost kinship care with flexible GRF funding to help caregivers find services and support was passed by the House in 2018 but not by the Senate. 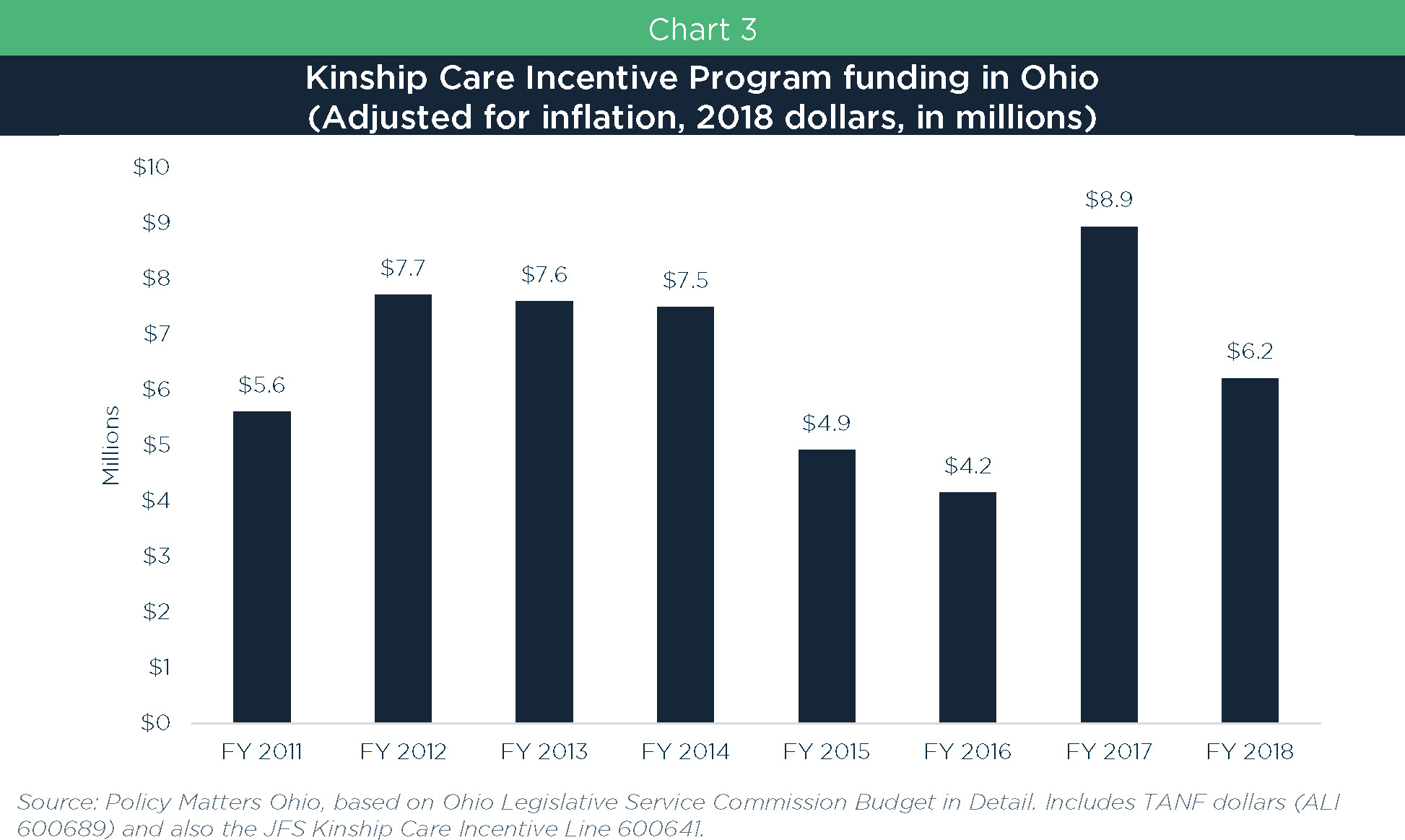 Lawmakers earmarked an additional $15 million from the TANF program to create a kinship care child care program in the 2018-19 budget, which is not reflected in Chart 7 because little of the money has been spent. The program itself was not implemented until May, near the end of state fiscal year 2018, and less than $400,000 has been used.[15] In part, this is because TANF dollars are restricted in use by federal rules. Some grandparents or other family members who took in toddlers or babies earned more than the federal income ceiling under TANF but not enough to afford child care for the children while they worked. The money has not been well utilized because of federal income restrictions.[16] This highlights the problem of over-reliance on federal funds. State lawmakers should have provided flexible GRF funding to meet the needs of this group, but instead used federal funds which were guided by rules that do not work for this particular situation.

In 2018 the Ohio House passed House Bill 126, which appropriated $5 million in GRF funds to establish a program to help kinship care families navigate the complex system of public assistance available to them and connect with local resources. Funding of such a program can be used to draw down federal dollars: the Family First Prevention Services Act provides a 50:50 match for statewide kinship navigator programs that meet federal criteria. The bill was introduced in the Senate and referred to committee, but did not move beyond that in the 132ndGeneral Assembly. Sponsors in the new General Assembly will need to renew efforts to get funding for this important program.

Over a quarter of households with children in Ohio are headed by single parents.[17] Single-parent households are much more likely to be low-income in Ohio, with about 33 percent making under $25,000 a year compared to only 6 percent of married households.[18] Child support is a major anti-poverty program.[19]

The Federal Deficit Reduction Act eliminated the use of incentive funds to draw down federal child support administration dollars starting in 2008. Incentives are earned by state performance and Ohio allocates the funds to the counties. Prior to the Deficit Reduction Act counties could use the earned incentives as local match to draw down additional federal funds. Incentives are still earned by state performance and allocated out to the counties, but they can no longer use the incentive dollars to draw down additional federal dollars. State GRF dollars were provided in 2008-09 to backfill for the loss of federal funds, but lawmakers did not maintain this funding over time.

Long term cuts have been far deeper, when inflation is factored in. On an inflation-adjusted basis, CSEAs have lost $15.6 million in annual funding, a drop of 39.5 percent, since 2008, when the state tried to compensate for the loss of federal funds. 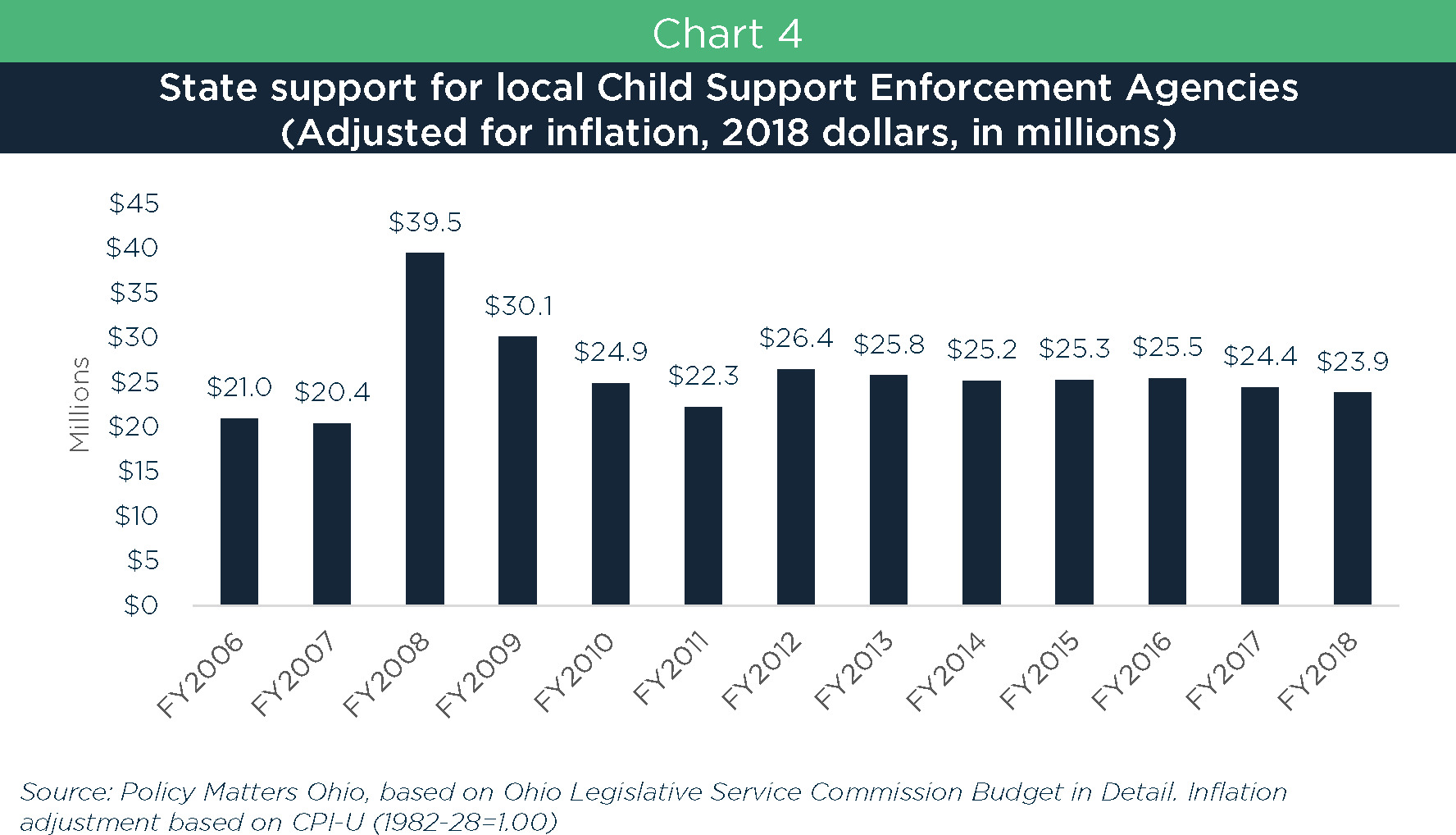 House Bill 366 of the 132ndGeneral Assembly modified Ohio’s child support laws. As a result, the Ohio Legislative Service Commission (LSC) anticipates that Child Support Enforcement Agencies (CSEA) could face new costs related to staff training and modifications of existing child support orders,[23] – even as the state line item to assist with such cuts has been reduced.

Ohio lawmakers have reduced state investment in programs to support struggling families, instead spending the money on tax cuts, tax breaks and growing the state rainy-day fund. The programs described here are not the only eroded children’s services. There is no shortage of places to start the reinvestment.

The new governor should use his influence to pass legislation like the Kinship Care Navigator program which languished in the 132ndGeneral Assembly. Additional funding with flexible state dollars will allow the state to make rules that fit the needs of Ohio families. The budget for 2020-21 should restore a partnership with local governments, including increasing state support for important county human service agencies.

There will be a significant cost to restore investment in public child care to improve quality and increase access. The state should increase its own investment in early care and education, instead of relying heavily on federal funding. Revenue for investment can be raised in part by closing tax loopholes: The state foregoes $9 billion in tax breaks annually, and this spending grew by 18.5 percent since 2012, as funding for human services declined. It can be raised by taxing new growth components of the economy, like fracking, internet retail and Airbnb, and by restoring the top bracket of the state personal income tax.

Ohio can use its TANF dollars better through increased outreach to families at the point of disaster – to those who are homeless, facing eviction, or otherwise found to be in danger of extreme poverty. TANF funding to counties should be boosted for outreach and expanded services, for increased monthly grants and for programs that help families succeed in the work requirement program.

The new administration has the opportunity to do better, and Governor-elect DeWine’s campaign platform specifically cited areas in which investment would be boosted. However, over-reliance on federal funding and years of erosion by inflation make rebuilding services a heavy lift.

[5] The state has not provided an update of the TANF spending plan since March 9, 2017, so actual expenditures on public child care are highly uncertain. Underspending of both federal and state funds has occurred in early care and education programs in both the Ohio Department of Job and Family Services and Education. See Patton, Wendy, “2018-2019 Post Budget Bite: Public Childcare and Early Education,” Policy Matters Ohio, November 2019 at https://bit.ly/2skg2JG