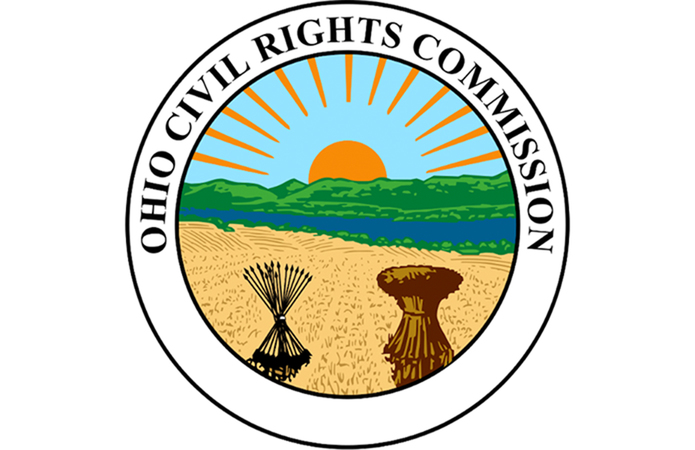 All people deserve fair treatment at work, at school, in housing and in public spaces. This is true whether they’re black, white or brown, able-bodied or living with a disability, straight, lesbian, gay or trans, male or female. In Ohio and in the United States, a long legacy of racism, ableism and sexism has blocked many people from jobs, housing, good schools and more. While many laws are now on the books that make overt discrimination illegal, traditionally marginalized Ohioans need someone to make sure these laws are being followed. Just last year, black workers at a General Motors plant in Toledo endured a barrage of racist harassment. They turned to the Ohio Civil Rights Commission for help. After a nine-month investigation, the commission found GM allowed a racially hostile environment: in other words, the company allowed the racism to continue unchecked. The plaintiffs are pursuing a lawsuit against GM.[1]

State funding for the Ohio Civil Rights Commission, a public service that protects residents from unfair treatment under the law, has fallen by almost 20 percent over the past two decades, adjusted for inflation.[2] In some years, funds from work sharing agreements with federal agencies offset state cuts. This federal support has been inconsistent, however. Today, discrimination and harassment cases are rising in Ohio. State policymakers should boost funding for the agency in the upcoming budget for 2020-21 to ensure civil rights protections.

In this issue brief, we look at trends in funding for the Ohio Civil Rights Commission, and examine how those affect operations. Figures are presented on a state fiscal year basis and unless otherwise noted, are adjusted for inflation.[3]

Civil rights laws protect us from unequal treatment. Federal, state and local governments have these laws and each state has an office or commission that enforces them. The Ohio Civil Rights Commission (OCRC), established in 1959, serves as the Ohio’s primary civil rights enforcer. It receives, investigates and resolves discrimination claims in employment, housing, public accommodations, credit and disability issues in higher education[4] and it provides education programs for schools, businesses and communities.[5]

A majority of the agency’s funding comes from state appropriations. The balance comes from the federal government for cases assigned by the U.S. Equal Employment Opportunity Commission (EEOC) and U.S. Department of Housing and Urban Development (HUD). These agencies have work sharing agreements around the processing of claims with state anti-discrimination entities like the Ohio Civil Rights Commission across the nation. Work sharing prevents duplication of efforts and has also helped balance caseloads in the face of budget cuts. For example, between 2000 and 2008 the EEOC lost approximately 25 percent of its full-time employees and its case backlog increased.[6] State-level entities like the OCRC had a larger workload during those years than later, during the Obama administration. Work sharing facilitates timely review, particularly because state anti-discrimination agencies - like the OCRC - must respond within a certain time frame. In addition, federal and state laws are similar but not identical. For example, the Ohio anti-discrimination statute covers employers too small to be covered by federal law. With work sharing agreements, cases can be easily assigned to whichever entity has the best expertise to address the specific issue.

Over the last two decades, state funding in the Ohio Civil Rights Commission’s budget fell by $1.4 million dollars, adjusted for inflation, a decline of 19.7 percent. State funding drifted upward before the recession and then fell sharply; lawmakers have not yet fully restored funding to pre-recession levels[7] (Chart 1). State funding rose in the 2016-2017 budget, but was cut in the current two-year budget period by about $550,000 (not adjusted for inflation), a 4.9 percent cut. Federal funds rose, helping to offset the state cut. 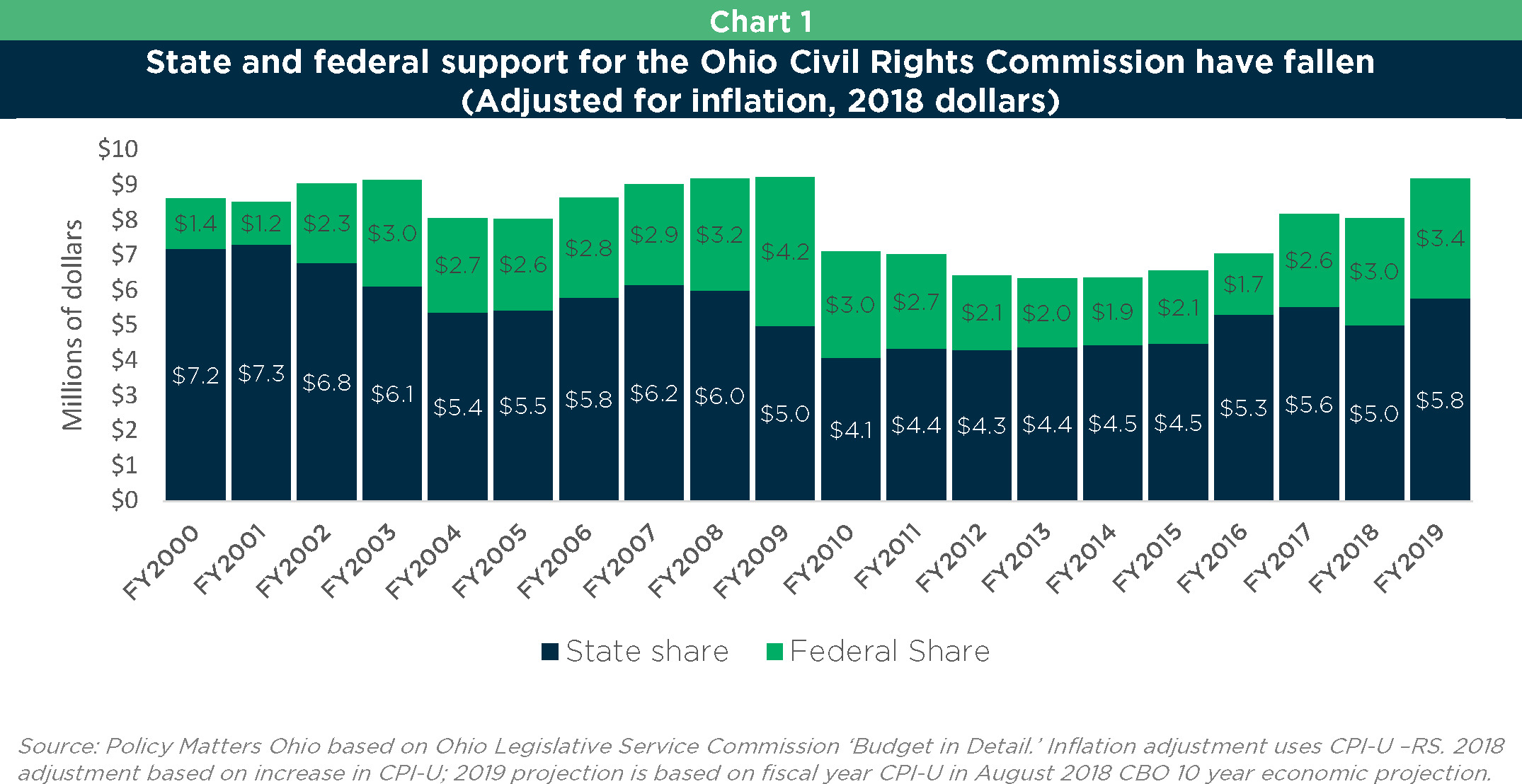 Federal funding has gone up and down over the past two decades, in part due to changes in the federal government’s increased employment work during the Obama years. In 2017, 2018 and 2019, however, federal funds grew and helped offset the state cuts.

Employment discrimination charges accounted for 72 percent of the OCRC’s work in 2018. It’s the most important area of work for the agency. It is unclear whether EEOC capacity will shrink or grow in the short term, which impacts federal funding for state agencies. The EEOC was threatened in the Trump budget for 2018, which proposed merging another office into it, but without additional funding. Congress actually provided the EEOC a $15 million bump for state agencies in the FY 2018, but federal funding is uncertain. Right now (January 2019), the EEOC is closed due to the government shutdown. [8]

Impact of the cuts

In 2000, the Ohio Civil Rights Commission had a staff of 199 and nine offices (A central office in Columbus, and offices serving six regions located in Central Ohio (Columbus), Cleveland, Akron, Toledo, Dayton and Cincinnati; there were two satellite offices within the most heavily populated regions as well).[9]

By 2008, staff fell to 124 employees. With subsequent budget cuts, the agency reduced staffing to 80 (Chart 2), a net loss of more than half the employees.[10] It cut regional and satellite offices; curtailed education and outreach and relied on obsolete equipment. [11] The agency introduced an online reporting system for filing discrimination claims, but efficiencies were curtailed by outdated technologies.[12] 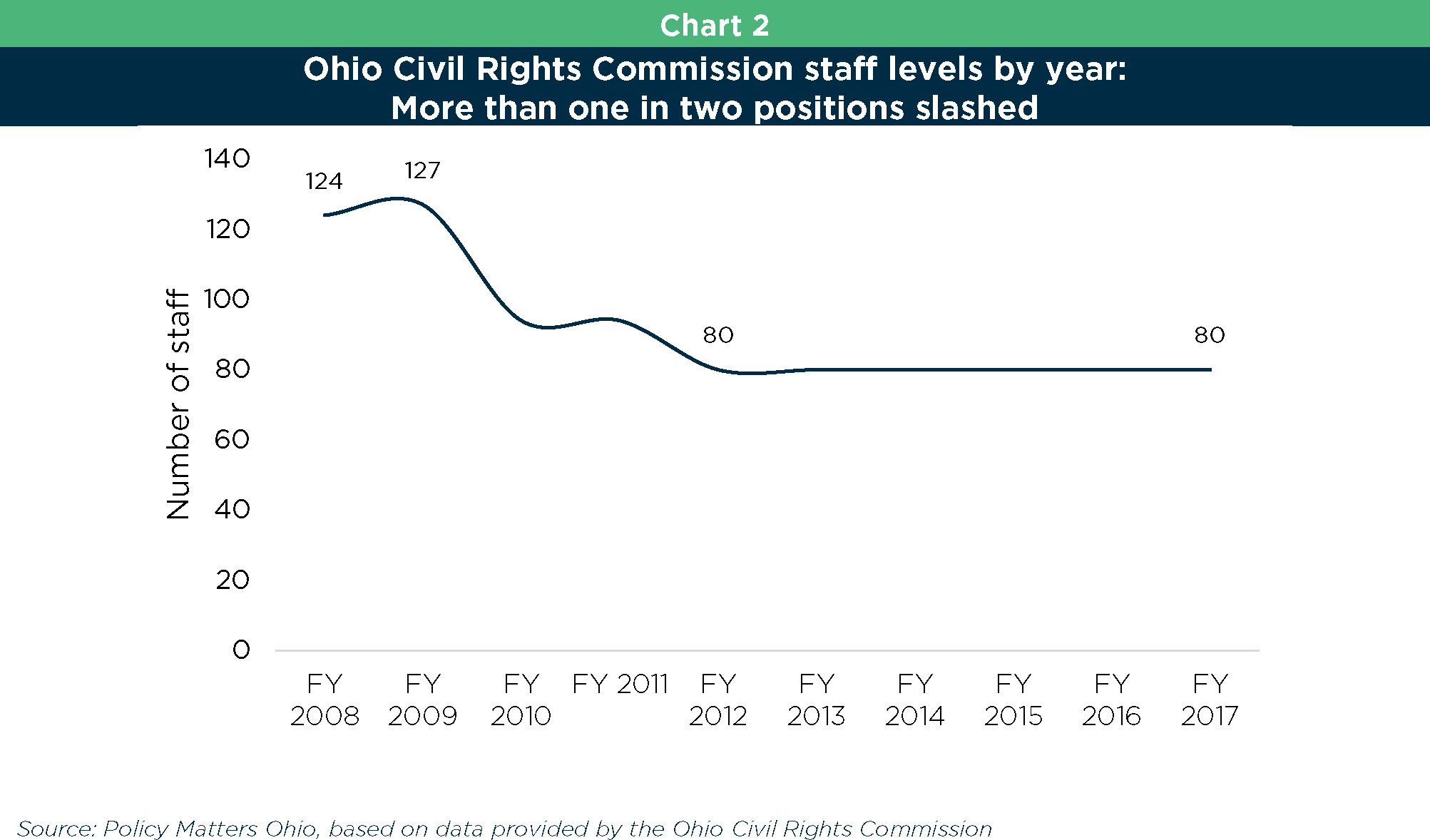 Because of the loss of state funds in 2018-19, the OCRC used a federal reserve fund of $600,000 - meant to cover work on HUD discrimination contracts because of the timing of federal payment for that work - to cover overall agency operating expenses. The increase in federal funds in the current budget period allowed the agency to avoid a cash flow problem, but agency leaders believe a problem could emerge during the next budget.

The OCRC closed 3,674 cases in 2018. The number of cases filed has fallen since 2011 as more employment discrimination cases were pursued by the EEOC. The agency reports that with a recession, people are less likely to file discrimination claims because of fear of retaliation. Funding for the agency fell by an inflation adjusted 22.7 percent in the budget of 2010-11 ($2.5 million,) compared to 2008-09. Agency staff fell by more than a third, from 127 in 2009 to 80 by 2012.

Cases fell after 2012, but the trend is changing (Chart 3). The number of cases filed with the OCRC rose by 27 percent in 2018 compared to 2016. The agency has worked hard with diminished resources and has become more efficient. By 2018, OCRC investigative staff averaged 94 completed investigations per investigator/mediator; up by 8 percent since 2016.[13] 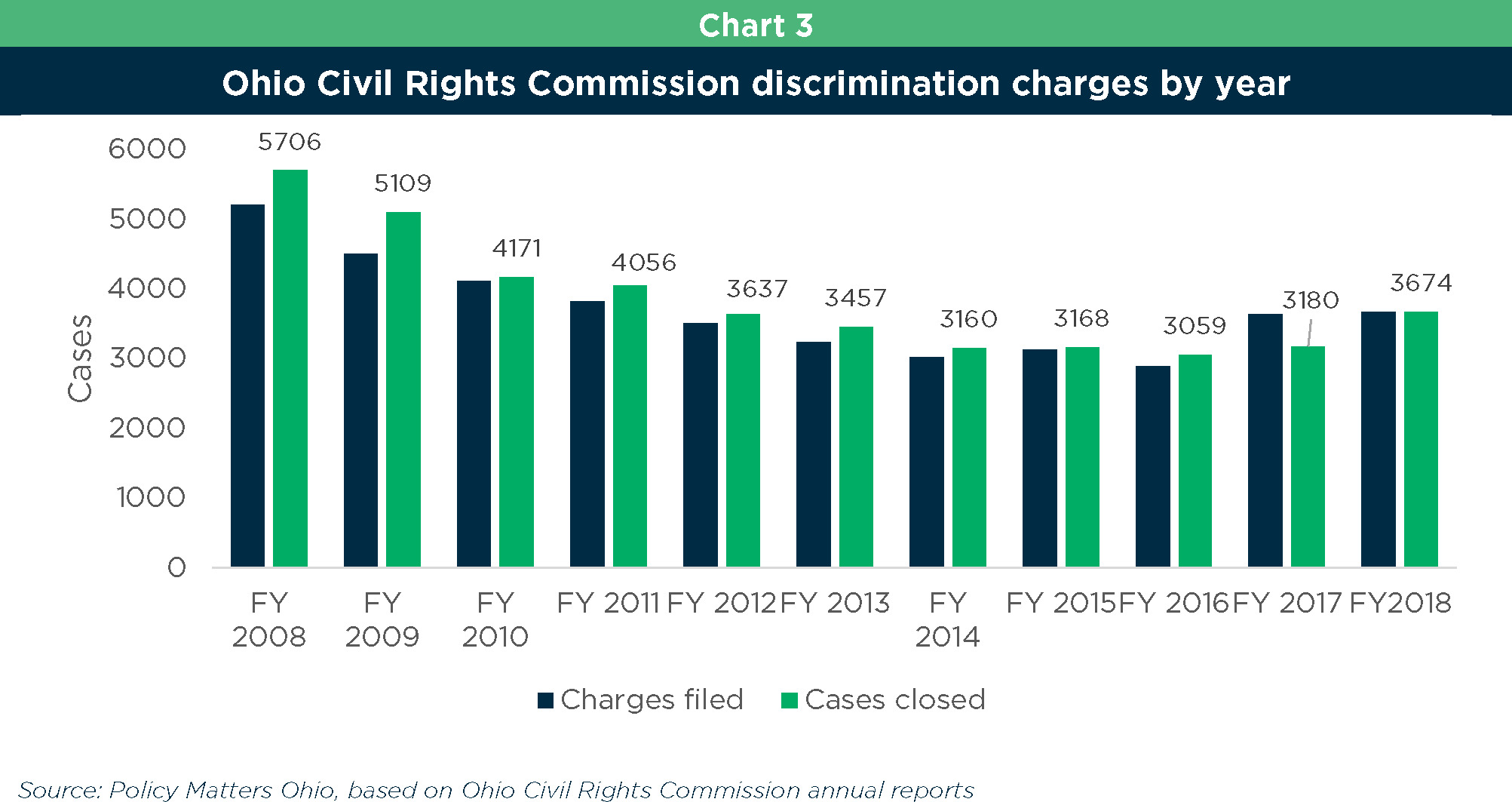 Several trends have escalated racial tensions in Ohio and across the nation, from police shootings of unarmed black people, to President Trump’s attacks on immigrants, to white supremacist marches.[14] The number of national hate crime[15] incidents jumped 23 percent in 2017 relative to the previous five-year national average[16] and Ohio’s incident rate of 4.6 hate crimes per 100,000 people is more than double the national average of 2.1 incidents.[17] Given this context, the work of the OCRC is more important than ever. The number of harassment cases filed with the agency rose 41 percent since 2016, more sharply than the increases in overall cases, which rose by 27 percent, also a steep climb).

With the rise of the Me Too movement, more victims of sexual harassment have filed complaints. In 2018, the OCRC handled 47 percent more sexual harassment cases than in 2016 (Chart 4). Despite growing national awareness about sexual harassment, the Trump Administration has moved to narrow redress for victims. Last year Trump reversed a 2014 order that forbade federal contractors from forcing workers to resolve sexual harassment and discrimination through arbitration, which keeps the claims secret.[18] Secretary of Education Betsy DeVos rescinded a key Obama-era rule that set a new standard for how schools should respond to sexual harassment and assault accusations.[19] Federal initiatives are narrowing options for victims. Protecting state-level capacity is critical to ensuring protection to Ohioans. 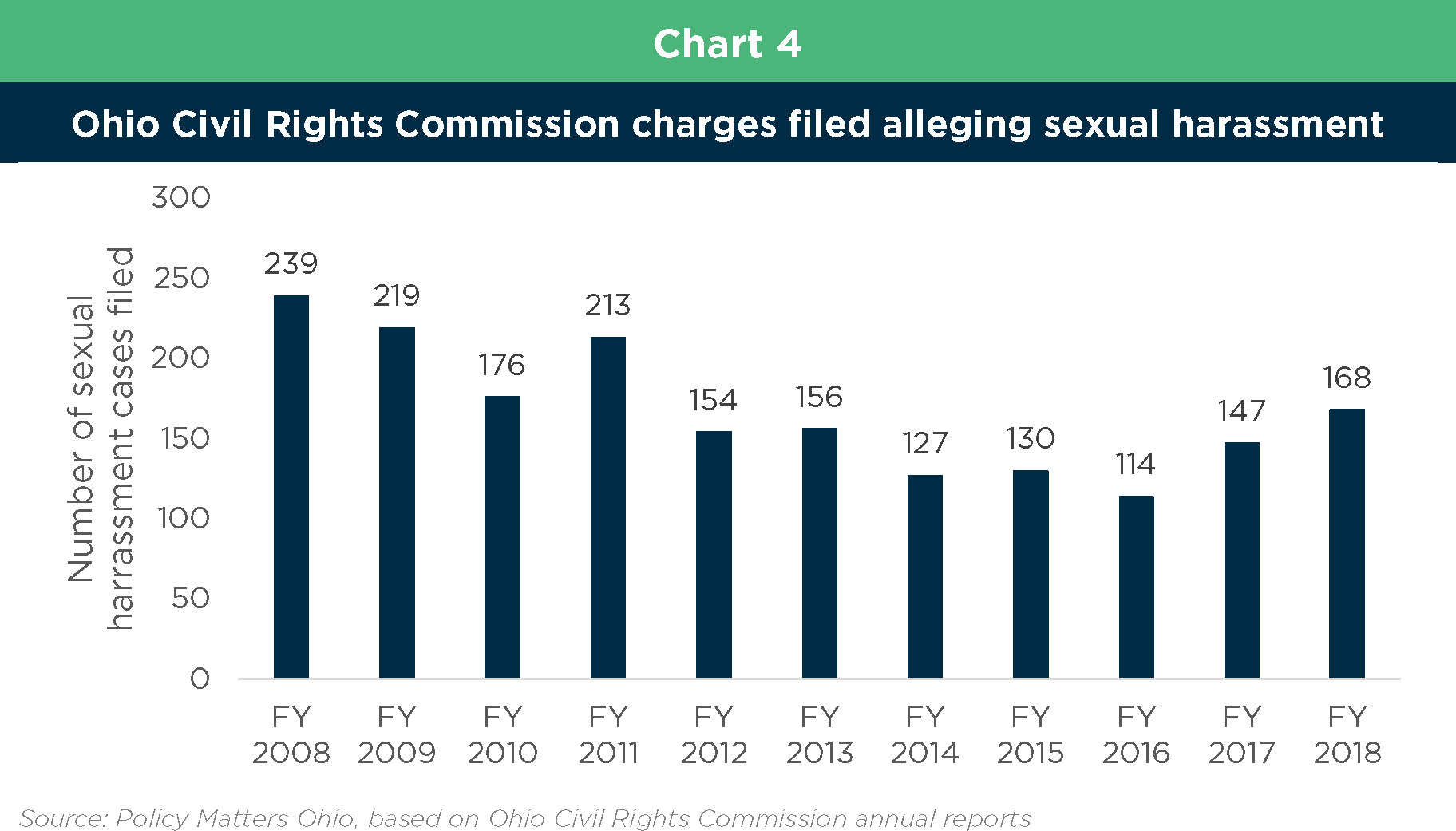 State agencies prepared budget estimates for the upcoming two-year budget 2020 and 2021 based on two scenarios: flat funding (not adjusted for inflation) at the 2019 level, or funding with a 10 percent cut. Flat funding for the Ohio Civil Rights Commission would allow inflation to erode the budget by an estimated $215,000, adjusted for the inflation. A 10 percent cut would mean the loss of another $1 million. As number of cases filed rises, diminished funding would harm response to rising harassment and discrimination.

The agency is getting more efficient. This year investigative staff averaged 94 completed investigations per investigator/mediator.[20] The ratio has risen by 7.6 percent since 2016 as number of cases rose but staffing levels remained the same. Currently, the agency processes the average investigation in 138 days, and the average mediation in 33 days.[21] Agency leaders fear that fewer staff would prolong the average time to resolve complaints, delaying resolution.[22] Further, loss of staffing could endanger the agency’s ability to handle federal workload, which could pose cash-flow problems during the next budget period because of the loss of the $600,000 federal reserve fund.

At a time when complaints are rising, the Ohio Civil Rights Commission needs more funding, not less. Ohio lawmakers should fully restore the $600,000 the agency needs in the federal reserve fund and also provide funding to restore staffing in the regional offices.

Fifteen additional positions, at a cost of slightly less than one million dollars a year, would allow the agency to reopen a separate Cincinnati office, boost staffing at each of the regional offices and increase education and outreach.

Lawmakers should provide funding of about $7.3 million in state funds for 2020, which includes replenishment of the reserve fund, and $7 million in 2021.[23]

There will always be a need to curb discrimination and teach respect. The rising number of cases filed with the OCRC should be met with increased support. The state can demonstrate its commitment to civil rights protections for all people by equipping the OCRC with the resources necessary to accomplish this work.

[4] This category of activity refers to discrimination cases having to do with disability other than public accommodation, i.e., issues around accommodations necessary for learning disabilities.

[8] The EEOC has been closed because of the Federal Government shutdown; see https://www.eeoc.gov/shutdown.cfm

[12] Obsolete computers were replaced with used equipment from the Department of Administrative Services. Interview with G. Michael Peyton, Executive Director, OCRC. Equipment was updated this past fall (2018).

[15] The FBI defines a hate crime as a “criminal offense against a person or property motivated in whole or in part by an offender’s bias against a race, religion, disability, sexual orientation, ethnicity, gender, or gender identity.” It should be noted that hate by itself is not a crime. Incidents are classified as hate crimes when law enforcement determines that unlawful action was motivated, in whole or in part, by the offender’s bias toward a protected class.

[23] Staffing costs calculated based on agency salary structure. These figures include an adjustment for inflation for fiscal years 2020 and 2021 based on the Congressional Budget Office’s August 2018, 10 year economic forecast.