Ohio needs to do more to protect its growing senior population from abuse. Approval of the $10 million proposed in the house- based appropriations bill of the Mid-Biennium Review would be a good start. Even better would be to provide the $20 million recommended by an advocacy coalition, which would help Ohio counties strengthen Adult Protective Services and more adequately reflect current need.

Mistreatment, neglect and abuse of elderly or disabled adults dependent on someone else for basic needs has been called a "silent epidemic." It gets little public attention and often goes unreported.

Around 15,000 cases of elder abuse are reported in Ohio every year but the actual number of cases is much higher. Estimates of the level vary. A 2010 statewide assessment of family domestic violence in Ohio estimated that about 115,000 seniors experience abuse, neglect or financial exploitation at the hands of a caregiver.[1] The National Elder Abuse Incidence Study of 1998 estimated that for each reported case, five more are unreported.[2] A more recent national study estimated that only one in 14 cases of elder abuse ever comes to the attention of authorities,[3] and the New York State Elder Abuse Prevalence Study found that for every case known to programs and agencies, 24 were unknown.[4]

Finding the money to meet APS responsibilities has been a challenge for Ohio counties. State aid has fallen dramatically in the past decade (Figure 1). The Center for Community Solutions found in 2013 that 39 of Ohio’s 88 counties lacked a full-time staff person devoted to Adult Protective Services.[6] Ohio, the 7th largest state in the nation, provides just $500,000 annually for APS: some counties get as little as $2,000 a year from the state.[7] This is less than one-sixth of what the state was providing in recent peak funding years. 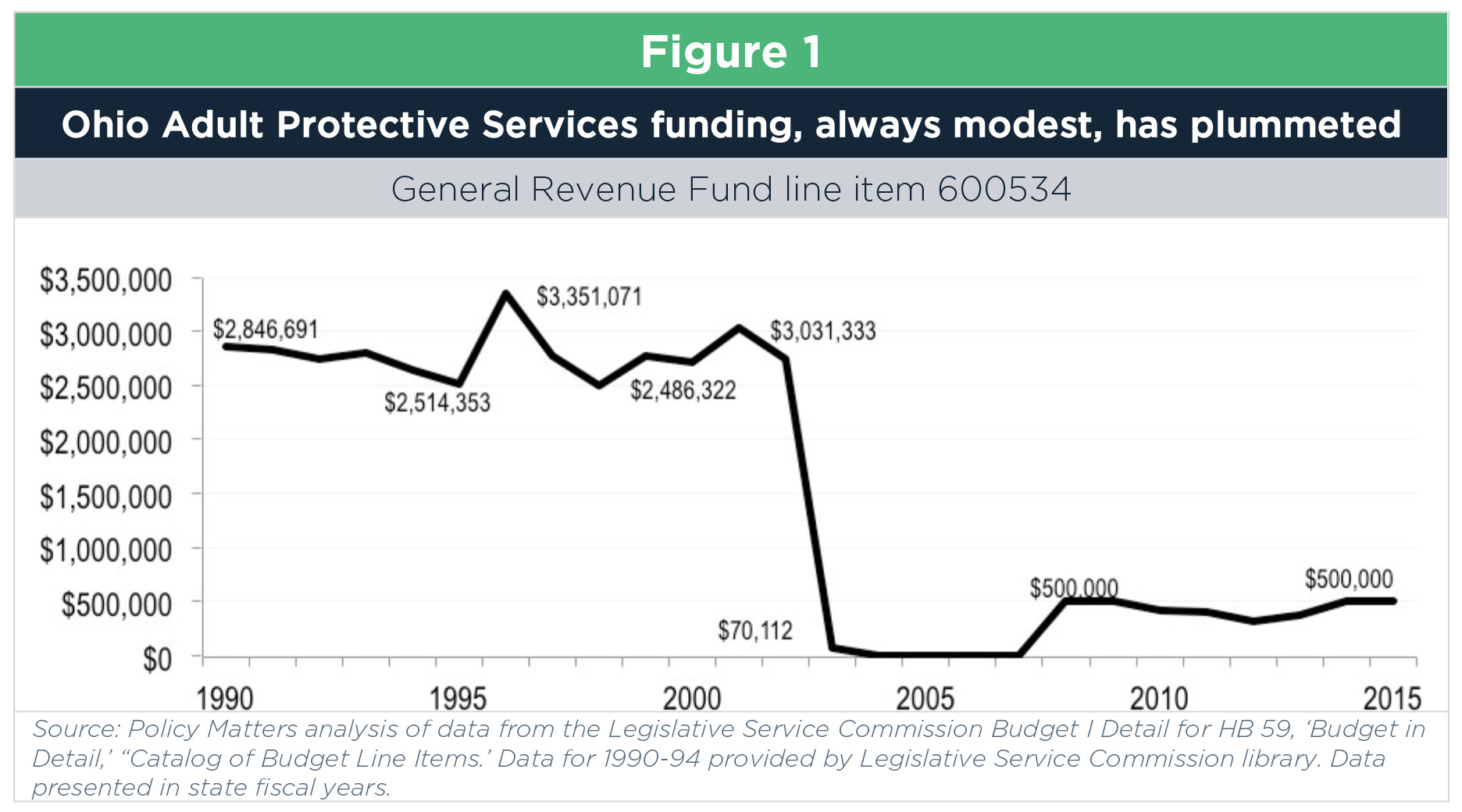 Counties use a combination of federal and local funds to provide for seniors in the community. Local levies support services like senior centers, meals on wheels and transportation, but are restricted from funding adult protective services.[8] More than 95 percent of funding for APS in Ohio comes from the federal Social Service Block Grant (SSBG or Title XX). Ohio is twice as dependent on federal dollars as a funding source for APS than average for the states.[9] SSBG is an uncertain funding base for an important service. Not only do many local services compete for these funds, but the block grant itself is shrinking, subject to sequester cuts and sometimes slated for elimination.

In this paper, we find that it would cost between $12 and $30 million to provide adequate APS service in Ohio. The Ohio Coalition for Adult Protective Services has requested $20 million. This funding would also help implement the provisions of House Bill 49 when passed by the Senate.[10]

Ohio’s population age 60 and older is projected to grow by 13.7 percent to 2.6 million between 2010 and 2015.[11] Table 1 ranks Ohio’s top 10 counties in terms of growth of senior population from 2010 to 2015 (See Appendix, Table A-1, for complete list of counties). Enormous growth is anticipated for rural and suburban counties. However, even large urban counties, including Summit, Stark, Lucas, will see senior population growth of greater than 10 percent between 2010 and 2015.

Large growth in the senior population is driving the need for better APS services. In addition, the state is moving toward caring for the aged and disabled at home instead of in nursing homes. Studies find that more abuse goes on in the home than in institutional settings.[12]

Statewide, more than 15,000 incidents are reported annually to Adult Protective Services in Ohio, but estimates of actual incidents are much higher: from 75,555 to 214,271 and even higher (The federal National Center for Elder Abuse’s website cites studies that indicate between 7.6 to 10 percent of the elderly population experience mistreatment).

Table 2 shows the estimates for 10 Ohio counties that are expected to have the highest incidents of elder abuse (See Appendix, Table A-2, for all Ohio counties). We give an average of APS incidence counts for the past three years in the first column. We multiply these figures by five in the second column to estimate the number of cases of abuse if we use the approach of the National Elder Abuse Incidence Study, which estimates five incidents for each report. Columns 3 and 4 give estimates derived from the Family Domestic Violence Study conducted by Professor Kenneth Steinman in 2010 and published by the Health Policy Institute of Ohio. The final column represents the low-range estimate of elder abuse provided by the National Center for Elder Abuse website: 7.6 percent of seniors.[13] 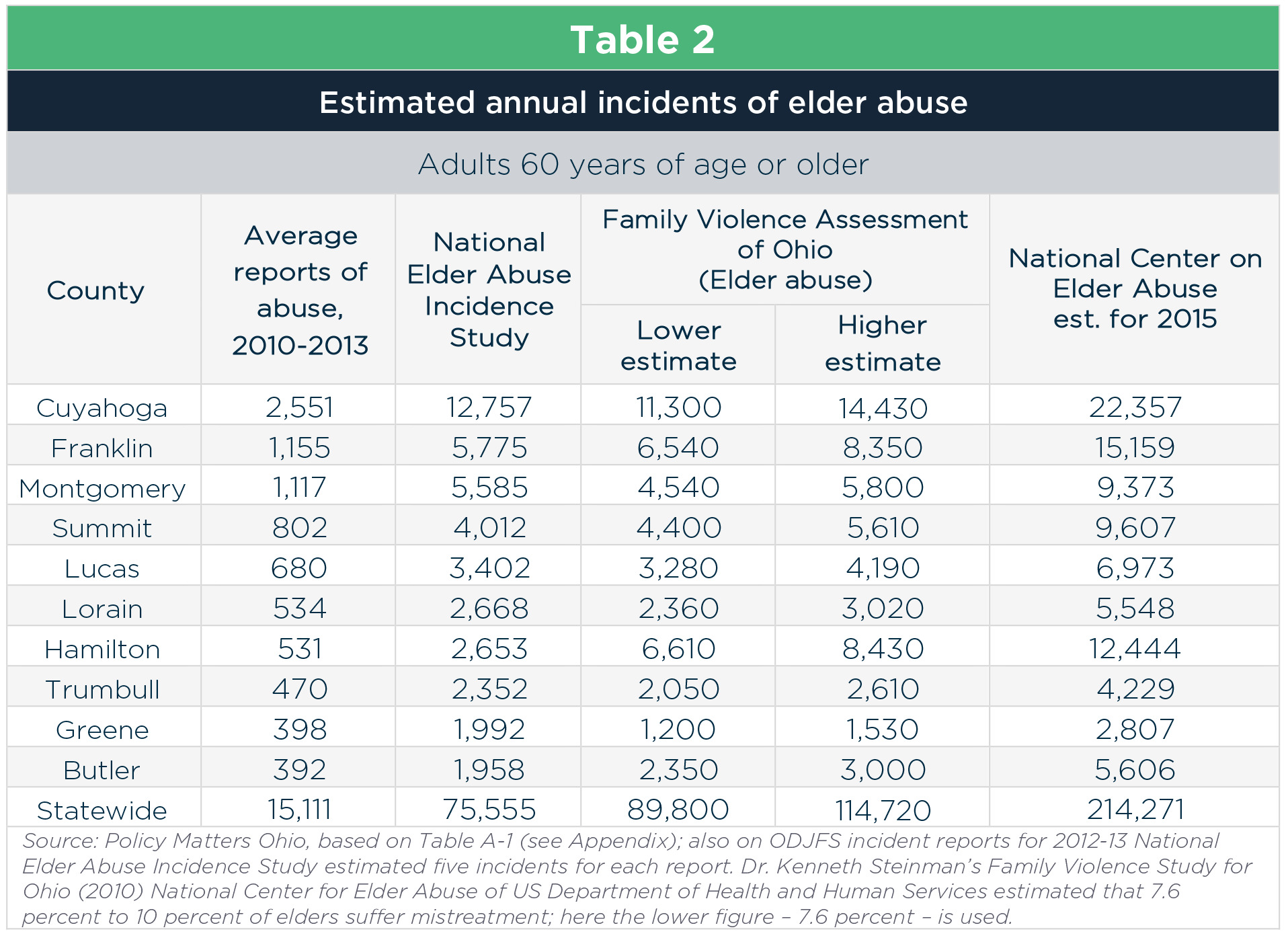 Table 2 illustrates the difficult nature of this silent epidemic: wide variation between reporting of incidents and estimates of actual incidents. This is in part because of the nature of the threat. In 2003, the Ohio Commission on the Prevention of Injury speculated that victims’ lack of capacity (e.g., dementia), reluctance to seek treatment, and dependence on perpetrators may impair reporting.[14]

There is also wide variation in reporting among Ohio’s 88 counties. An unpublished study by the Ohio Coalition for Adult Protective Services found several reasons for this variation:[15]

The estimates in Table 2 tend to be low because not all problems addressed by APS are included in each study. For example, the 2010 Family Domestic Violence Study did not cover self-neglect, which comprises a significant share of county staff time. In their 2003 assessment of elder abuse and neglect in the state, the Ohio Commission on the Prevention of Injury estimated 38 percent of reported cases were self-neglect cases.[16]

Social services for individuals are needed, but outreach is also needed to find the afflicted and to educate the community. The Ohio Commission on the Prevention of Injury provided a set of recommendations to strengthen the system of APS, including increased outreach, increased surveillance, targeted resources for high-risk groups and empowerment of people in the community to recognize and stop mistreatment, exploitation and neglect.[17]

State funding to implement this kind of protection has never been in place in Ohio. In 2005, the Attorney General’s Elder Abuse Task Force Report noted: “APS in Ohio has a long history of being neglected. As reflected in the history of substandard budget allocations and frequent budget cuts, no entity has ever championed the case for protection of the elderly.[18]

Staffing needs and cost by county

Table 3 illustrates staffing needs in 10 counties corresponding to estimates of incidents of adult abuse. (See Table A-3 in the Appendix for a complete listing of counties). Statewide, an estimated 272 to 714 caseworkers are needed just to administer the investigative service. This does not include supervisory or administrative staff. 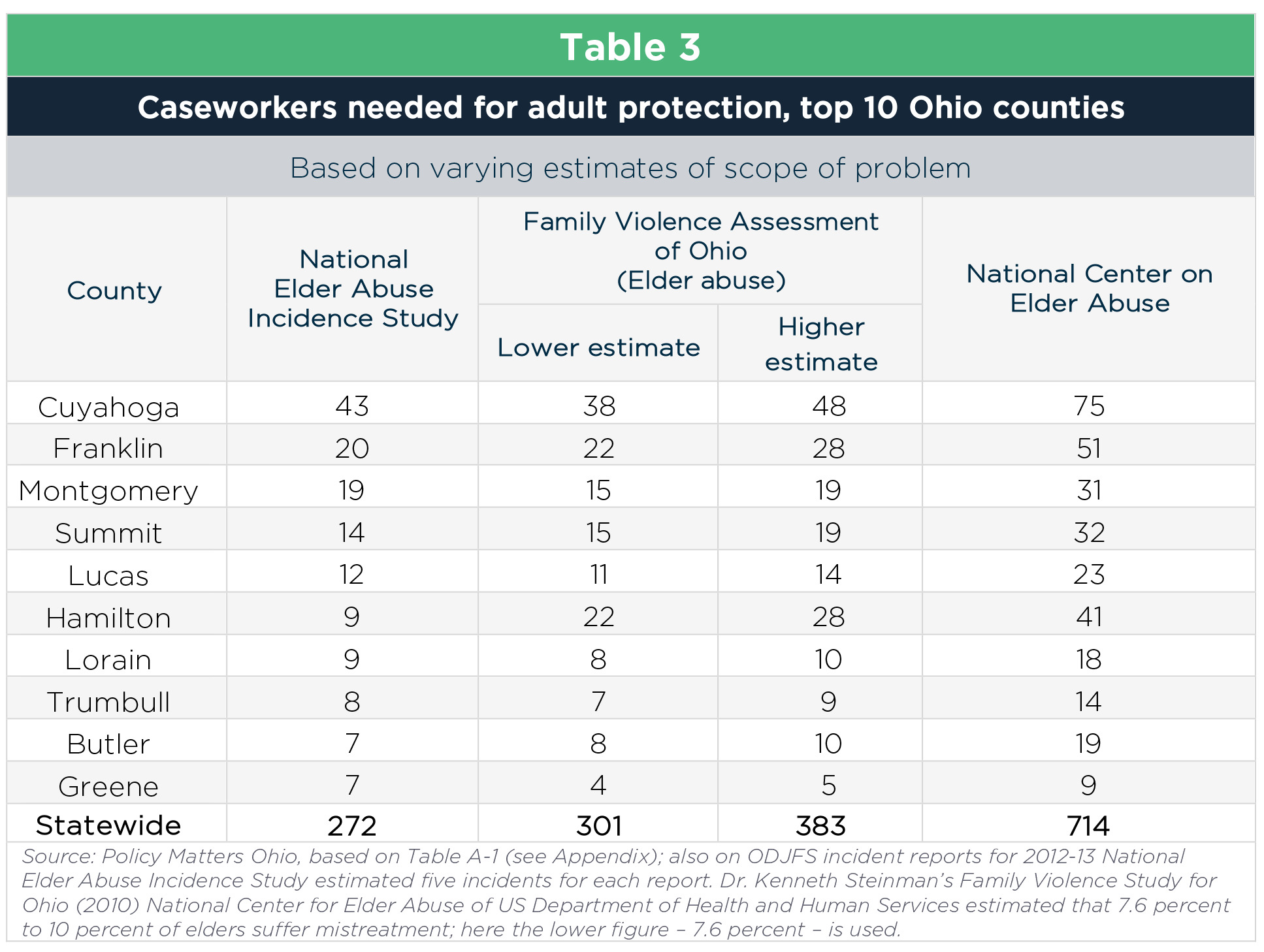 Caseworker count was derived by finding a monthly caseload from each estimate of annual estimates (by dividing annual estimates by 12 for a monthly count) and dividing the resulting number by the nationally recommended APS caseload of 25 cases per month.[19] While all counties had reported incidents, some of the reporting was very low. This count provides for at least one caseworker in each of Ohio’s 88 counties.

Table 4 illustrates the cost of adequate caseworker staffing for each estimate of need. Urban, rural and suburban counties show up on this list. A complete list of all counties, listed alphabetically, is in the Appendix in Table A-4. To calculate staff cost, we used the 2013 statewide median salary ($33,809) for ‘Child, Family and School Social Worker’ (Occupational code 21-1021) plus 25 percent for benefits, resulting in a total of $42,261.[20] We multiplied this compensation cost by the number of caseworkers needed according to the different estimates.

The lowest estimate is yielded by the National Elder Abuse Incidence Study methodology, which estimates five incidents of abuse for every incident reported. This calculation finds $11.7 million is needed for an adequate number of caseworkers in the 88 counties. To meet the highest range of the family domestic violence study – which is five years old and which did not include the significant category of self-neglect – $16.2 million would be needed. To address the lowest level estimate of the National Center for Elder Abuse, $30.2 million would be needed.

Abuse of elderly Ohioans is a growing problem and far more prevalent than current statistics suggest. This makes it imperative that Ohio meet its obligations to provide a higher level of protection to vulnerable residents.

A current provision in the house-based appropriations bill of the Mid-Biennium Review (HB 483) would fund Adult Protective Services at $10 million. This is a good start, and where funding should have been for the past decade. Because of the growth in the senior population and the increasing emphasis on serving seniors in homes and the community instead of nursing homes, Adult Protective Services now needs an appropriation of at least $20 million a year. Reports of elder abuse, neglect and exploitation are expected to increase as managed care providers report suspected abuse or mistreatment.

Adequate state support will enable the county departments of job and family services to address the new demands of managed care and home-based care, as well as the full range of investigative focus, including financial mistreatment, addressed in House Bill 49, passed by the House of Representatives of the 130thOhio General Assembly.

[10] The fiscal note for HB 49, which would change definitions and expand mandatory reporting, create a registry, and other requirements, reports the Ohio Department of Job and Family Services anticipates millions in cost to the state and substantial cost to local county departments of job and family services as well. See Ohio Legislative Service Commission bill analysis at http://www.lsc.state.oh.us/fiscal/fiscalnotes/130ga/hb0049hp.pdf

[12] Ohio Department of Public Safety, Report from the Ohio Commission on the Prevention of Injury 2003, at http://www.publicsafety.ohio.gov/links/elder%20abuse.pdf.