Ohio tax shift away from wealthy: The pattern repeats

Ohio tax shift away from wealthy: The pattern repeats

The main tax measures in Ohio’s new budget bills will bring tax increases on average for lower- and middle-income taxpayers, while those at the top of the income scale on average will see cuts. Overall, the bottom 95% of taxpayers with annual income below $208,000 a year will average increases, while those in the top 5% who make more than that will see cuts. For many Ohioans, the combined effect of a higher gas tax and required collection of sales tax by out-of-state online retailers will more than offset income-tax cuts the General Assembly has approved this year.

Those are the main conclusions of an analysis by the Institute on Taxation and Economic Policy (ITEP), a Washington, D.C. nonprofit with a sophisticated model of the tax system. ITEP examined major tax changes in the state transportation and operating budgets approved this year. The group modeled the increases in fuel taxes and changes in the state Earned Income Tax Credit (EITC) in the transportation budget, along with the operating budget’s cuts in rates and brackets of the state income tax, the suspension for one year of indexing income tax brackets and personal exemptions to inflation, and new requirements for online retailers to collect the sales tax.

Both the fuel tax increases and the online sales tax moves were needed – the first to provide badly needed revenue to bolster the transportation system and the second to level the playing field between online and brick-and-mortar retailers. The sales tax has always been due on online purchases, it’s just that out-of-state retailers hadn’t been required to collect it. The U.S. Supreme Court ruled last year that they could be, and most states have moved to implement such requirements. However, the changes in both the gas tax and sales tax are regressive, falling more heavily on lower-income taxpayers. While needed steps, they illustrate the need for larger policies that will address the fairness of the Ohio tax system, including a refundable EITC.

The General Assembly made a number of changes in the personal income tax in the two different budgets. In the transportation budget, in addition to raising the tax on gas and diesel fuel, it increased the state EITC to 30% from 10%, while wiping out a unique cap that had limited the EITC for those earning more than $20,000. Then, in the operating budget, it approved an across-the-board 4% cut in income-tax rates, while eliminating the bottom two tax brackets, increasing to $21,750 the amount one has to make before paying tax. It also stopped adjusting brackets and the size of the personal exemption for inflation for one year, an effective tax increase. ITEP modeled all of these changes, although it did not examine a move to keep lawyers and lobbyists from receiving a tax break on business income, which is difficult to model at this time. Overall, the income-tax rate, bracket and indexing changes in the operating budget were estimated to reduce revenue by $340 million in Fiscal Year 2020, money that could be used, for instance, to come up with a better way to fund public schools.

The personal income tax cuts in the two budgets don’t amount to much for most individual taxpayers. Overall, they average less than 0.3% for any income group. The average overall tax cut for those in the middle fifth of tax filers, those earning between $42,000 and $63,000, will be a hardly noticeable $23 a year ($34 on average among the 70% in this group who will benefit).

Cutting rates and eliminating the bottom two brackets of the income tax assist the poorest tax filers who qualify – by an average of $160 a year – but a large majority don’t qualify at all. Fully three-quarters of the lowest-income Ohioans, earning less than $24,000 a year, will not see a benefit from the income-tax cuts. Cutting the income tax leaves out many low-income residents because we have a graduated income tax, under which you pay more as you make more. In addition, previous positive steps to create a state EITC, eliminate the income tax on those making less than $10,850 and boost the personal exemption for those earning $40,000 or less mean that a family of three with income of $20,000 already wasn’t paying Ohio income tax.

Meanwhile, as with any across-the-board income-tax rate cut, the most affluent see the biggest dollar savings. The top 1% will get 20% of the income-tax cuts, even including the increase in the EITC and the elimination of the bottom two brackets, which do not affect this group. Some 58% of the income-tax cuts will go to the top 20% of Ohio earners, making more than $101,000 a year. Though the poorest taxpayers on average get a bigger boost in relative terms, it amounts to less than 0.3% of income, or an average of $38 a year for the poorest fifth of Ohio tax filers, because so few benefit. Table 2 shows the combined impact of the personal income tax changes, including the 4% rate cut, the elimination of the bottom two brackets, the expanded EITC and the end of indexing for one year. 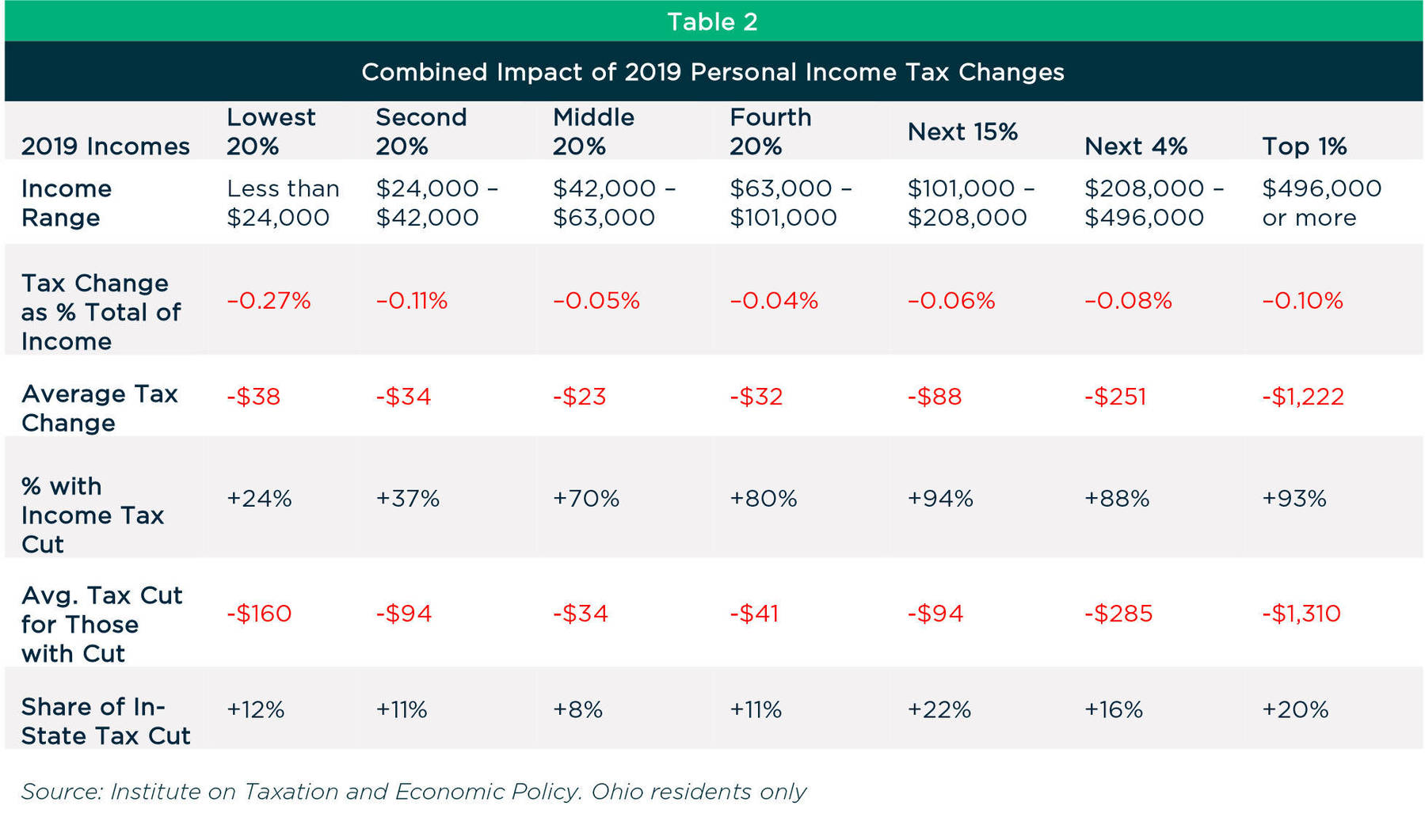 ITEP’s modeling of the fuel-tax increases (see Appendix) includes the effects of both the 10.5-a-gallon gas tax increase and the 19-cent-a-gallon boost in the tax on diesel (it does not include new registration fees for owners of hybrid and plug-in electric vehicles mandated under the transportation budget bill.). Higher-income tax filers will pay more on average in absolute dollars than lower-income tax filers; they are more likely to own cars, and more of them, as they also tend to have larger households. They also spend more in absolute dollars on consumer goods, which reflect the increased diesel tax. However, lower-income Ohioans pay a bigger share of their income for the fuel tax increases than more affluent taxpayers do because their incomes are so much lower. While the amounts are smaller, the effects of the required collection of sales tax by online retailers are similar: Lower-income tax filers will pay a larger amount as a share of income (see Appendix).

The General Assembly took two positive steps with the state EITC by increasing the size of the credit to 30% of the federal EITC, and eliminating the cap. Ohio needed these changes, since the poorest residents pay nearly twice as much of their income in state and local taxes as the richest 1%. But while these provisions helped some low- and moderate-income families, the large majority of Ohio’s poorest residents did not benefit. Partly, that’s because Ohio’s EITC is nonrefundable, meaning that it will only wipe out taxes you’re liable for; unlike with the federal EITC and those in most states, there is no refund even if on paper the credit works out to more than you owe. If Ohio added a refundable 10% EITC, it would provide an average $252 to 397,400 tax filers making less than $24,000 a year, according to ITEP’s analysis. Another 195,400 making between $24,000 and $42,000 would average a $303 annual boost. That could be paid for by limiting other special-interest tax breaks, including the $1 billion business income deduction known as the LLC loophole. That would direct more meaningful tax reductions to those who need them and rebalance Ohio’s tax system.

The combined impact of the budget bills approved this year continues the long-time pattern of shifting taxes away from the most affluent Ohioans. While higher fuel taxes and more complete collection of sales tax on online purchases were needed measures, they underline the need for a refundable EITC and other steps that would reverse the regressive trend in Ohio tax policy. 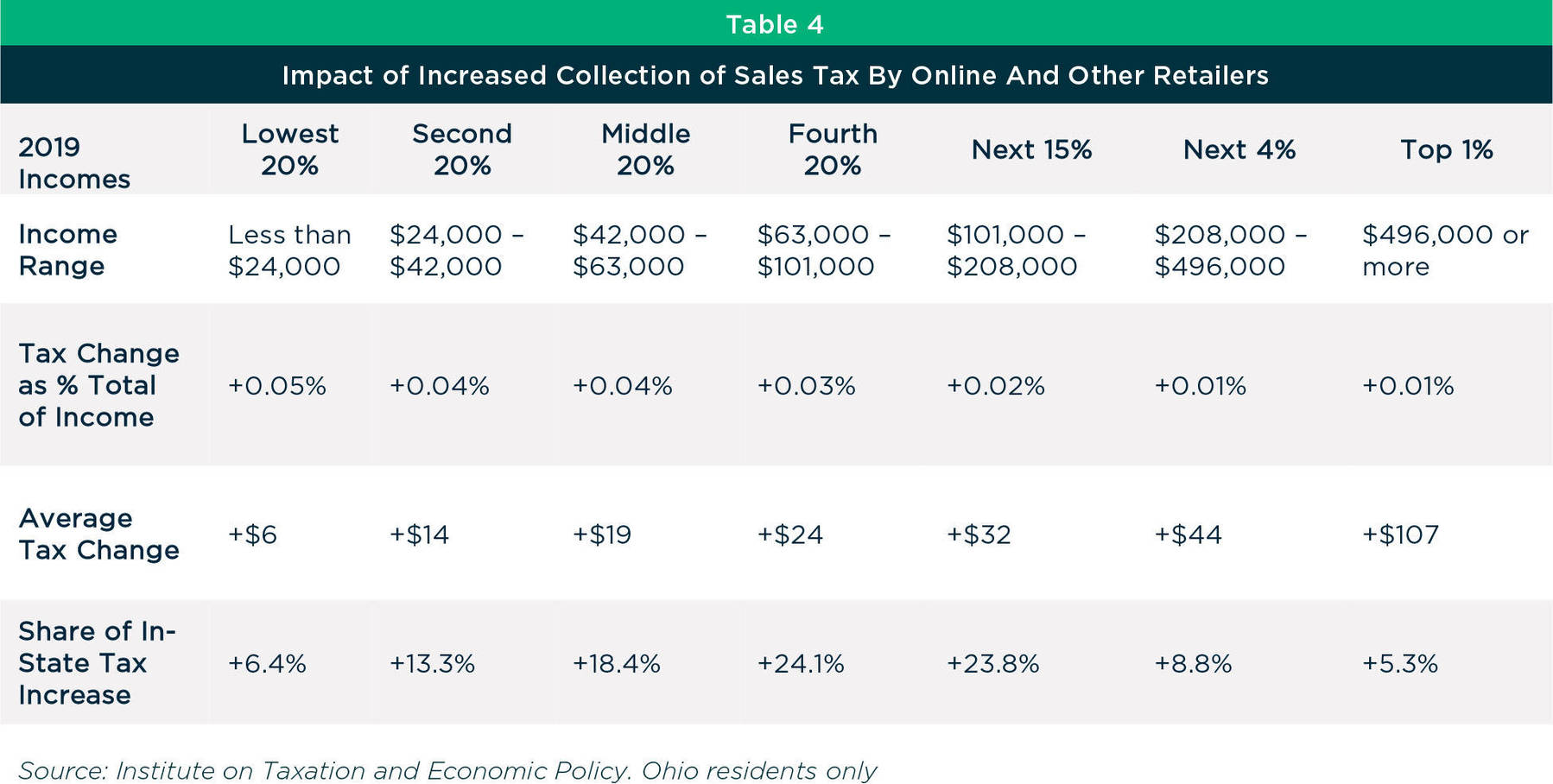