Our success as a state and a nation depends on whether all people, regardless of race, have the opportunity to thrive. From the beginning, American policies and practices oppressed, exploited and excluded Black, brown and Indigenous people, who still face obstacles to good jobs, housing, educational opportunities and health care. As a result, wealth held by Black and brown families amounts to a fraction of what white families have.[1] Ohio’s tax system could help, but it doesn’t. An analysis by the Institute on Taxation & Economic Policy (ITEP), a national nonprofit research group with a sophisticated model of the tax system, shows how Ohio’s unbalanced tax system is more favorable for white Ohioans, on average, and less favorable for Black, brown and Indigenous people. Rebalancing the state’s tax system would reduce the inequity for Ohioans of color and generate revenue needed to build opportunity and drive economic growth: good schools, safe and affordable housing and healthy residents in all communities.[2]

Impact of systemic racism on income and Ohio tax structure

Racist policy choices — past and present — have made it harder for Black, Latinx and Indigenous families to make gains in the American economy. Housing policies force people of color into high-poverty neighborhoods, cutting them off from well-paid jobs that are relocating to the outer suburbs.[3] Overly punitive and racially discriminatory drug laws target Black and brown men and sent many primary breadwinners to prison for low-level offenses. When they returned, they encountered discrimination from employers who refused to hire people with a criminal record and a myriad of legal barriers that blocked them from certain occupations.[4] The confluence of these policies has stunted economic opportunity. The most recent census data indicates that while the median household income for white Ohioans is $61,198, it is $41,773 for Black households — a difference of $19,335 dollars.[5]

Tax policy can exacerbate or shrink inequality. The sales tax is regressive because it falls less heavily on higher-income people in part because they don’t spend all of their income. Ohio’s personal income tax, by contrast, is based on the ability to pay, with rates that rise incrementally on higher bands (“brackets”) of income. Ohio’s personal income tax narrows the income gap by race and ethnicity very slightly — not enough to meaningfully address racial income disparities. Fifteen years of tax cuts that benefitted the wealthiest left the state income tax flatter and therefore less equitable than it was before. By 2018, the wealthiest 1% of Ohioans were paying an average of $40,000 less in state and local taxes than they would have under the laws of 2005, when all of the tax cutting started. People of middle income on average are paying about the same, largely because any gains they got from income tax cuts were offset by increases in sales and other flat taxes. People of the lowest income were actually paying more, as sales and other taxes increased.[6]

The Ohioans with the lowest incomes pay a greater share of their income in state and local taxes than the wealthiest Ohioans. 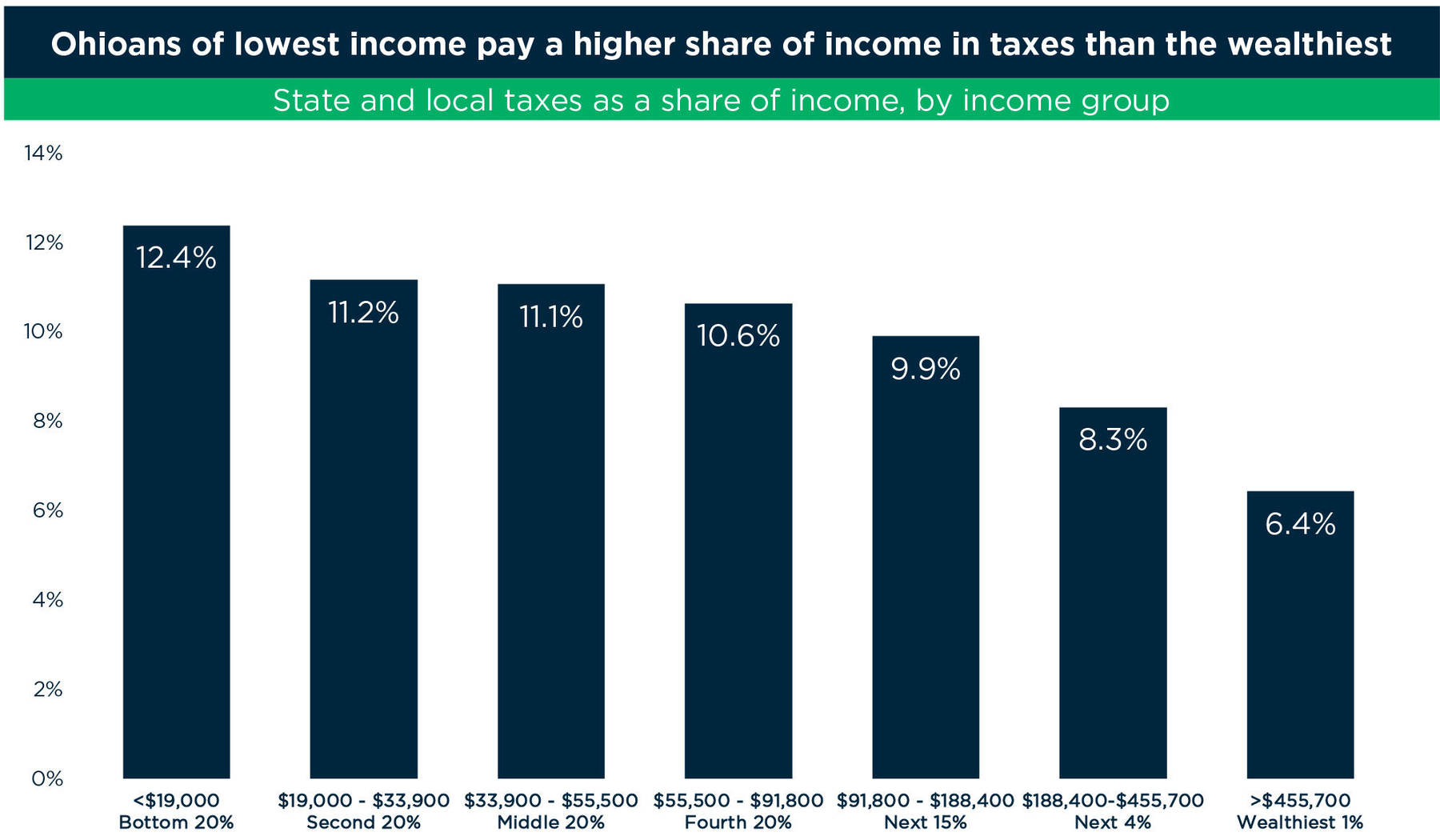 Source: Policy Matters Ohio, based on data from the Institute on Taxation and Economic Policy in an e-mail of January 29, 2020, based on 2015 income data for non-elderly Ohio residents. Includes federal and state tax changes through 2019.

The next chart, below, shows how white Ohioans are far more likely than Black people to be in the highest income quintile, who pay less, on average, in state and local taxes as a share of income, than those lower on the income scale. Conversely, Black Ohioans are more likely to be in the lowest income quintile, and pay a larger share of their income in state and local taxes than the top income group.

Source: Policy Matters Ohio, based on data from the Institute on Taxation and Economic Policy in an e-mail of January 29, 2020, based on 2015 income data for non-elderly Ohio residents. Includes federal and state tax changes through 2019.

Ohio’s largely white, upper-income households pay a lower share of taxes relative to their incomes than families of more modest means. The ITEP analysis found the top 20% of earners, each collecting over $91,800 of income per year, receive 56.4% of all income in Ohio and yet pay just 50.2% of state and local taxes. Because upper-income families contribute less than their fair share, families of modest means contribute more. The 80% of Ohioans who are paid less than $91,800 receive just 43.6% of statewide income but pay 49.8% of statewide taxes. This imbalance suppresses the incomes of low- and middle-income families and lifts the relative incomes of the state’s most affluent — and largely white — group.

The racial inequity in Ohio’s tax system is hardly unique. Tax policies in many states have contributed to the racial wealth gap: White households, which constitute 65% of all households, own 87% of the nation’s wealth.[8]

This new data underscores the need to overhaul Ohio’s state and local tax systems. The pandemic and recession have thrown into stark relief the need for government to use its power to build a safer, stronger and more resilient Ohio. We can control illness and keep people healthy by fully funding public health. Children living in every community can attend a great public school by reforming how Ohio funds K-12 public education. We can make sure no child is poisoned by lead in the water or paint on the walls. All communities can be cared for by medical professionals who they trust. Gov. Mike DeWine convened the Minority Health Strike Force to address the policy causes behind COVID-19′s heavy toll on Black and brown Ohioans. They made 34 recommendations, which can be addressed in the state budget.[9] Ohio’s lawmakers should use the powerful tool of a rebalanced, strengthened tax code to eliminate inequity in the tax structure, fund the recommendations, and build a better future for all.

A good place to start is boosting the income tax on the state’s top earners. Policy Matters’ income-tax proposal would restore the top income-tax rate first approved under Gov. George Voinovich, while adding a new, higher rate for those making over $500,000.[10]It also would repeal the LLC loophole, a deduction on business income that especially advantages affluent Ohioans and has not significantly boosted the state’s economy. Finally, it would strengthen the state Earned Income Tax Credit, which helps only a fraction of the poorest working Ohioans because it is not refundable. All these steps would help turn our tax system right-side up and reduce its lopsided impact on African American, Latinx and Indigenous Ohioans.

[2] ITEP data excludes tribal reservations, but includes Indigenous people living in urban and rural areas. Ohio is one of a handful of states that does not have any federally recognized tribes, or tribal reservations within its boundaries, and therefore has a smaller than average Indigenous population compared to other states, making it difficult to parse out statistically significant findings.

[4] Shields, Michael and Pamela Thurston, “Wasted assets: The cost of excluding Ohioans with a record from work” 12/18/18 at https://bit.ly/2Rfqukw

[7] Latinx is a gender-neutral term for people of Latin American origin or ancestry.

Rebalance the income tax to build a better Ohio for everyone
October 15, 2020

Rebalance the income tax to build a better Ohio for everyone
October 15, 2020