Ohio’s upside-down tax system takes an especially heavy toll on black and Latinx[1] residents. That’s the finding of new research from the Institute on Taxation & Economic Policy (ITEP), a national nonprofit research group with a sophisticated model of the tax system. ­­Cleaning up the state’s tax system so that it fairly distributes the tax load would reduce economic barriers facing black and Latinx Ohioans and generate revenue needed to invest in the building blocks of thriving local economies such as good schools and healthy residents.

ITEP found in the latest edition of its Who Pays? report that the poorest fifth of Ohioans, who make less than $19,000 a year, on average pay nearly twice as much of their income in state and local taxes as the most affluent 1 percent of Ohioans, who make at least $456,000 a year.[2] The bottom fifth also pay substantially more (12.3 percent) than the top fifth, who make at least $92,000 a year and average $198,400 (7.7 percent). Figure 1 shows these findings. 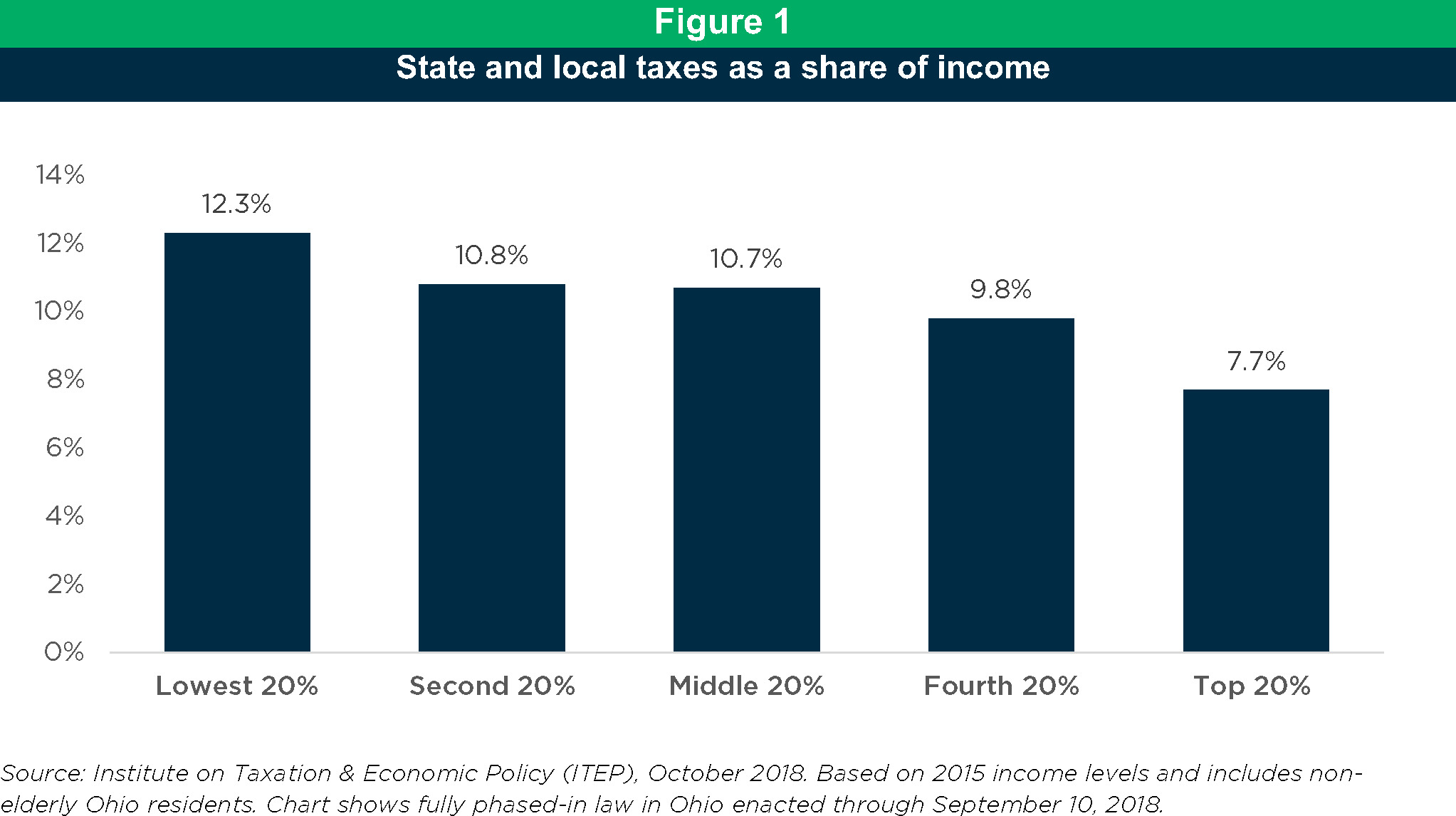 Long after the end of slavery and the dismantling of many Jim Crow laws, structural barriers make it harder for African-Americans to make gains in today’s economy. Black Ohioans at the midpoint of the wage scale, or the median, earned just $13.96 in 2017. That compared to $18.57 for white workers, which translates into more than $9,500 less each year with full-time year-round work – much of this is likely due to bias or discrimination.[3] Racist housing policies drove Ohioans of color into high-poverty neighborhoods, cutting them off from good-paying jobs that are increasingly moving to the outer suburbs.[4] Overly punitive and racially discriminatory criminal justice policies sent many primary breadwinners to prison for low-level drug offenses. When they returned, they found many employers refused to hire people with a criminal record.[5] 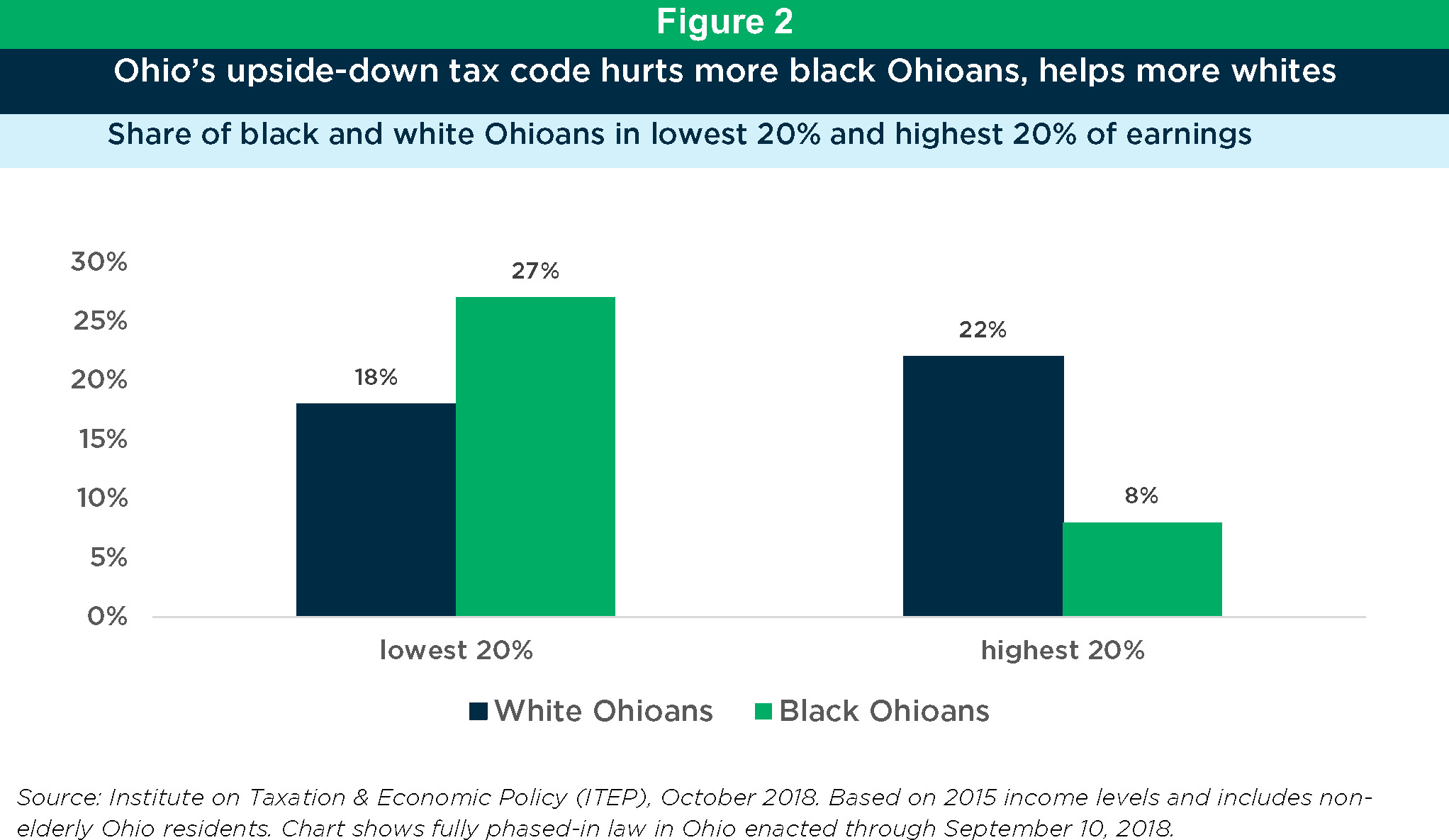 This new data underscores the need for an overhaul of Ohio’s state and local tax system.[6] A good place to start is boosting the income tax on the state’s top earners. Policy Matters’ income-tax proposal would restore the top income-tax rate first approved under Governor George Voinovich, while adding a new, higher rate for those making over $500,000.[7] It also would repeal the LLC loophole, a deduction on business income that especially advantages affluent Ohioans and has not significantly boosted the state’s economy. Finally, it would strengthen the state Earned Income Tax Credit, which helps only a fraction of the poorest working Ohioans because it is not refundable.[8] All these steps would help turn our tax system right side up, and reduce its lopsided impact on African-American and Latinx Ohioans.

[1] Latinx is a gender-neutral term for people of Latin American origin or ancestry.

[2] Patton, Wendy, “Ohio state and local taxes hit poor and middle-income families the hardest,” Policy Matters Ohio, 10/17/18, at https://bit.ly/2RctFJY and Institute on Taxation and Economic Policy, “Who Pays? A Distributional Analysis of the Tax Systems in All 50 States,” Sixth Edition, October 2018, at https://itep.org/whopays/

[5] Shields, Michael and Pamela Thurston, “Wasted assets: The cost of excluding Ohioans with a record from work” 12/18/18 at https://bit.ly/2Rfqukw