Testimony on Senate Bill 225 before the Senate Finance Committee

Testimony on Senate Bill 225 before the Senate Finance Committee

Senator Dolan, Ranking Member Sykes and members of the Senate Finance Committee, thank you for the opportunity to testify on Senate Bill 225. This bill proposes that you double the amount of money available for the Ohio Historic Preservation Tax Credit and the Opportunity Zone Tax Credit, increasing the tax expenditures on these two programs from a combined $170 million over the two-year budget period to $340 million.[1] SB 225 would also make the tax credits more lucrative to private investors by boosting refundability in the Historic Rehabilitation Tax Credit and expanding eligibility and thus the opportunity for transferability of the Opportunity Zone Tax Credit. We oppose SB 225.

SB 225 proposes a particularly generous expansion of already-generous tax breaks, which are the expenditure of public resources through the tax code. If overall spending through the tax code were compared with other uses of state operating funds, it would be the second-largest category of spending, more than state dollars spent in the General Revenue Fund on Medicaid, more than state foundation funding sent out to public schools, three times state expenditures on higher education.[2] In the recent budget bill, members of this General Assembly added eight new tax breaks and boosted spending through the tax code by hundreds of millions of dollars, even imposing new tax breaks that will not affect this budget period, but the budgets of future General Assemblies. In the same bill, you also abolished the Tax Expenditure Review Committee, which was established on a unanimous, bicameral, bipartisan basis in 2016 to bring transparency and accountability to the over $9 billion annual tax expenditures.[3]

The problem with increasing the cap

Senate Bill 225 would double the $60 million annual cap on the Ohio Historic Preservation Tax Credit and increase the state subsidy from 25% to 35% of project costs in most of the state. (It specifically excludes the seven largest cities of the state from this increase.) The state subsidy complements a similar federal tax credit, which subsidizes 20% of costs. Thus, with this proposed expansion, public resources could pay for a significant share of some of the privately-owned development projects, pumping up profits to developers and investors.

The Legislative Budget Office (LBO) analysis does not provide detailed fiscal information on exactly how much capacity there is currently to subsidize deals in the Ohio Historic Preservation Tax Credit (HPTC) in 2022 and 2023. It specifies that “Continuing law limits the Director to awarding no more than $60 million in rehabilitation tax credit certificates per fiscal year, plus any unallocated credits from previous fiscal years.” However, the analysis provides no further information on existing, unallocated credits that can affect the amount of subsidy available in a given year.

In years that the $60 million cap is not reached, remaining funds can be used in future rounds. Funds from projects that are cancelled or excess, unused project funds may also be reallocated in future rounds. In addition, accounting for the annual use of the cap was affected by the “catalytic tax credit,” a variation on the standard tax credit that could go up to $25 million (eliminated in 2017). The publicly available information on tax incentive awards, formerly on the website of the Ohio Department of Development and now existing in DataOhio,[4] accounts for the full catalytic tax credit in the year of the award, but the Department’s Office of Communications informs us that accounting for this type of tax credit award was stretched out over up to five subsequent years.[5] These variations make it difficult to understand demand for and use of the $60 million cap. 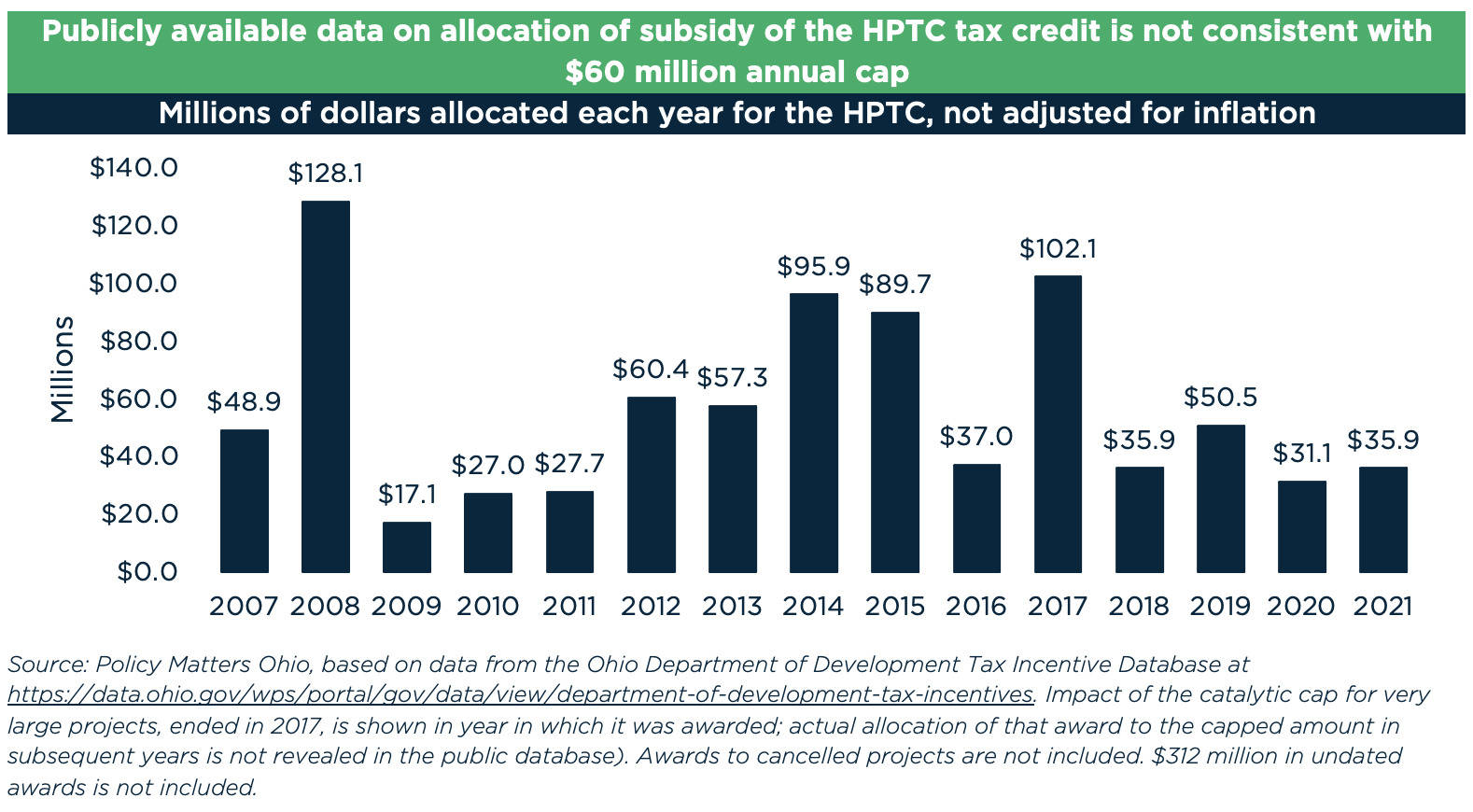 Excess subsidy from cancelled or unawarded capacity from earlier years may be available throughout 2022 and 2023. Constraints on capacity may linger from the 2017 award of two catalytic credits. An official of the Ohio Department of Development’s Office of Communications told us that there will be $37 million available for the first funding round this fiscal year.[6] How much is likely to be available in the subsequent three rounds of the budget cycle? More information is needed before you double the subsidy in this tax break.

An unfair increase in refundability

The “Opportunity Zone” economic development initiative, created as part of federal tax cut legislation in 2017, has a name that sounds generous and philanthropic, but it hasn’t turned out that way. Writing in The New York Times, David Wessel said this about the program in a recent column: “A capital-gains tax break sold as a way to induce the wealthy to invest in poor neighborhoods, opportunity zones appear to be providing more opportunity for the wealthy to cut their tax bills than to the people who live in designated zones…” [7]

SB 225 proposes that the state Opportunity Zone Tax Credit, which complements the federal opportunity zone tax credit, be expanded by doubling the size of the Ohio program from $50 million over a two-year budget period to $100 million over the 2022-23 biennium. It would also expand eligibility from Ohio investors with state tax liability to any investor, including those who have no state liability, who can then sell or transfer that tax credit to other entities who wish to lower their Ohio state tax liability.

The state Opportunity Zone Tax Credit is transferable under current law. This means an investor can sell the value of the state tax break to another entity who may have no relation to the project whatsoever, but who wants to reduce their Ohio tax bill. The transfer of the tax break is “leaky”: Value leaks out in payments to brokers in the transferrable tax credit market, as well as insurers and attorneys involved in the transaction.[8] The purchaser and ultimate beneficiary of the tax credit likely has no relation to the development project but wants to pay less Ohio taxes. In 2008, then-Tax Commissioner Rich Levin testified on transferable tax credits proposed under House Bill 196 of the 127th General Assembly: “The tax credits are being used to offset tax liabilities in Ohio that ... have nothing to do with film production, the industry this proposal seeks to incentivize.” [9]

If the goal is to get $5 million into a development project, a direct grant is more efficient. There is no leakage of value, and state spending through the operating budget is scrutinized once every two years for effectiveness and efficiency — unlike spending through the tax code, which is neither transparent nor accountable, and now, with the abolition of the Tax Expenditure Review Committee, has no specific venue for accountability to the taxpayer.

Heretofore an Opportunity Zone Tax Credit has been available only to Ohio investors. Senators tried to change that in House Bill 110, but it didn’t make it through the conference committee.[10] With SB 225, you are being asked — again — to approve a change that has been rejected before.

The Opportunity Zone program offers tax benefits to wealthy people who have accumulated capital gains. In Ohio, almost two-thirds of capital gains (64%) belonged to the richest one percent of tax filers in 2018, who had an average annual income of $1.2 million, and that is who would benefit from SB 225.[11] The federal Opportunity Zone program (upon which the state tax credit is piggybacked) provides an incentive to invest at this time: Greatest benefits come to those with who invest their capital gains in the program by the end of 2021.[12] SB 225 uses state resources to further sweeten the pot.

Opportunity zone investments may boost profits for wealthy people but have proven to do little for low-income families and communities. While noting that Opportunity Zone Funds provided a significant inflow of investment funds in northeastern Ohio, a blog of the regional economic development partnership, Fund for our Economic Future, pointed out that those investment funds did little for the low-income residents of targeted census tracts:

“[Opportunity zone funds] mostly went toward real estate development for market-rate housing and commercial properties—neither of which are significant job creators, and which likely would have happened anyway, judging by long-term development trends... Opportunity Zones may not be the best and most effective means to support our long-term vision of a growing economy creating good jobs and rising incomes for everyone.”[13]

In summary, we oppose SB 225 because it represents a lavish expansion ($170 million in total, including almost $6 million to the Local Government Fund)[14] of existing tax breaks for private developers, even as lawmakers refuse to commit to meeting critical needs of families and communities, like phasing in the Fair School Funding Plan, which over time would ensure fair funding for all school districts and an excellent public school in every ZIP code. There are many other public service needs in the state which should take priority over this expansion of subsidy of private developers. Further, public data on these tax programs is inadequate. Without further analysis, market demand for these subsidies that justifies the level of expansion proposed cannot be verified.

Thank you for this opportunity to testify. I will be glad to answer questions.

[2] In 2022 the state will spend $5.3 billion in state dollars in the General Revenue Fund on Medicaid; $8.1 billion on school foundation funding of public and charter (“community”) schools, $2.8 billion in non-federal dollars for higher education. The Tax Department estimates the state will forego $9.2 billion in 2022 due to tax expenditures. See Patton, Wendy, “Public Money for Private Interests,” Policy Matters Ohio, August 2021 at https://bit.ly/3oXS0md.

[10] Comparison Document of the Ohio Legislative Budget Office at https://bit.ly/3awuMLB.

[12] When the basis of the investment from a Qualified Opportunity Fund (QOF) investor’s original, rolled-over gain is taxed in 2026, that gain will decrease by 10% if they’ve been in the QOF for five years, making the end of this year — December 31, 2021 — the final deadline to be eligible for the 10% reduction. See Rodriguez, Carols J. (Sr.), “As Opportunity Zone Window Closes, The Case For Investment Is Stronger Than Ever," Forbes, October 5, 2021, at https://bit.ly/3BG4679.

[13] Davy, Bradford, “What We Learned from Supporting Opportunity Zones,” Fund for our Economic Future, August 25, 2021, at https://www.thefundneo.org/our-blog/.