Testimony on House Bill 157 before the House Ways & Means Committee

Testimony on House Bill 157 before the House Ways & Means Committee

Good morning Chairman Merrin, Vice-Chair Riedel and Ranking Member Sobecki. I am Wendy Patton, Senior Project Director at Policy Matters Ohio, a non-partisan, not-for-profit research organization with a mission to create a more prosperous, inclusive, equitable and sustainable Ohio. Policy Matters opposes House Bill 157 first, because it could result in an abrupt loss of municipal income tax revenues to cities and towns and make it more difficult for them to serve residents. As others have testified before this committee, we are also concerned that sudden change to the law will be administratively disruptive to businesses and communities alike. We worry that the proposed change is a gamble against the behavior of a dangerous and unpredictable virus. Finally, this issue needs to be considered not just as a narrow issue of individual benefit but in terms of impact on communities and the state as a whole.

Ohio’s public finance structure is unique in the share of public services paid for by local taxes. Counties depend on the sales tax. Schools depend on the local property tax. Ohio’s municipalities – cities and towns – depend on the income tax. Local income taxes are split between residence and workplace for those who live in one city but commute to work in another. Communities provide tax credits to limit a compounding effect of the commuter tax.

Last spring the General Assembly enacted House Bill 197 in response to the pandemic; Section 29 allowed employers to continue to withhold municipal income taxes at the place employees worked before the pandemic caused many to work from home. This allowed cities to sustain services pending a return to normal. Section 29 expires 30 days after the end of the pandemic health emergency ends. House Bill 157 would end Section 29 more abruptly. Like the Regional Income Tax Authority and the various business associations that testified last Friday, we urge the General Assembly to move slowly and deliberately in considering any legislation that attempts to address the shift in work models, and most importantly, give businesses and municipalities sufficient time to prepare for changes.

The finances of many communities were fragile going into the recession; the impact of HB 157 could reverberate statewide. Between 2010 and 2020, state lawmakers cut hundreds of millions of dollars from local governments. Many cities and towns went into the pandemic recession without the resources they need to serve the community and without much in budget reserves.[1] HB 157’s sudden elimination of the protection of Section 29 of HB 197 might push a number of communities into such fiscal crisis that they declared bankruptcy; this would impact all of Ohio in many ways, from image to the cost of borrowing. Residents working from their homes in suburban communities are affected by the well-being of the neighboring city where they worked before. If one of Ohio’s major cities were to suddenly lose so much revenue that it defaulted on bonds, bond ratings could be affected throughout the metropolitan area and work against the economic development efforts. In other words, HB 157 could cause fiscal crisis across the state that would not be beneficial even to those who stand to reap a short-term financial reward.

In 2020, The Brookings Institution found four of the five cities projected to be hurt the most by the pandemic were in Ohio, because of the importance of the municipal income tax to their finances.[2] Section 29 provided a measure of protection. Depending on timing and the duration of the pandemic, loss of that protection could hurt the vast majority of Ohio communities. In 2020, The Greater Ohio Policy Center estimated it would cause a collective loss to Ohio’s biggest cities of $306 million.[3] The Regional Income Tax Agency (RITA), which collects and administers the municipal income tax on behalf of 330 Ohio jurisdictions (51% of municipalities that levy an income tax), found up to 85% of cities analyzed could be net losers at the “middle impact” scenario.[4] Cities like Youngstown, which has suffered great loss of industry, population and revenues, would be hurt, but so too would New Albany, one of the state’s most affluent communities. 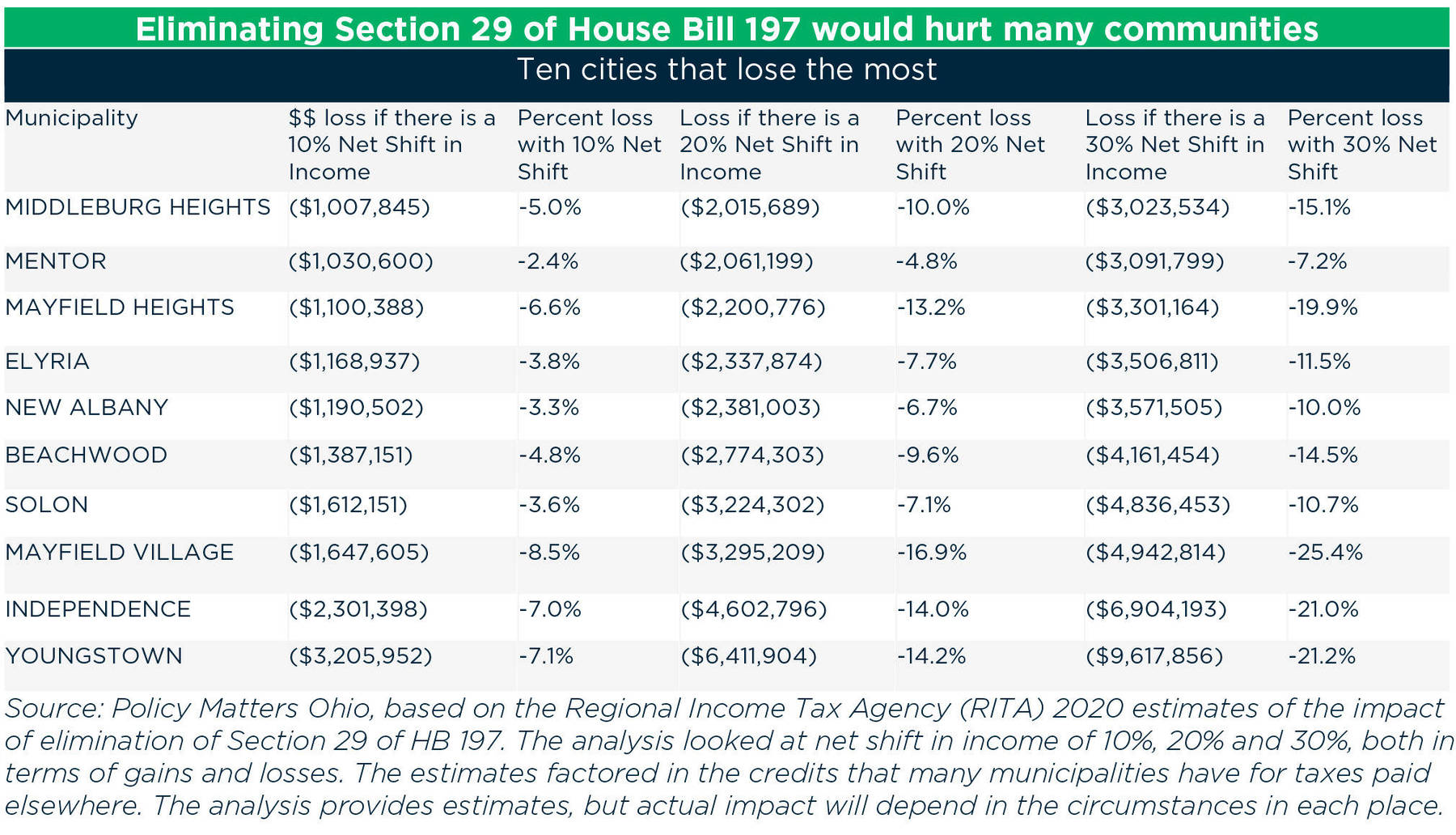 The table above shows the most heavily impacted municipalities, but many other communities lose as well. The RITA estimates under the middle impact scenario show Jackson and Rio Grande could lose 17% and 16% of total revenues, respectively; Cardington, 13%; Oakwood, 13%; Lodi, 12%; and Ravenna and Ostrander, 11%. Communities that could lose more than $500,000 under the same scenario include Circleville, Steubenville, Fostoria, Sandusky, Grove City, Worthington, Medina, East Cleveland and Bedford Heights.[5]

HB 157 is sort of a gamble. We hope that Ohioans are vaccinated by June, that the virus stops surging and the public health emergency is lifted. But we don’t know if it will be. HB 157 would eliminate the protection HB 197 gives to municipal public finance before a return to normal. It’s a bet against the deadly and unpredictable virus.

Thank you for the opportunity to testify. Please let us know if there are questions we can answer.